Pushup Challenge a Nonstop Cause for CSUSM Student, Marine Vet 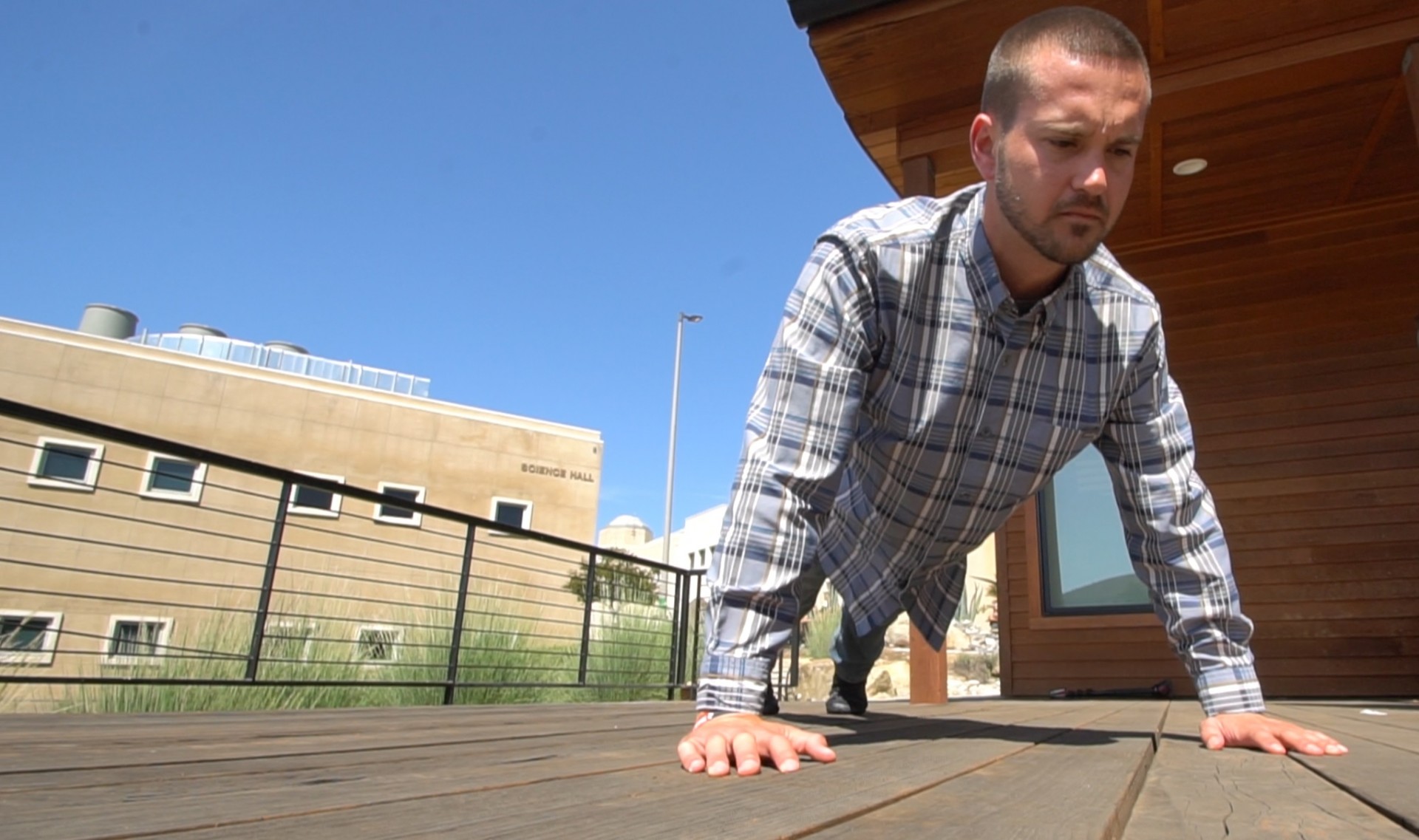 William Felty
The CSUSM master's student and Marine vet has done 22 pushups every day for more than two years to raise awareness of the issue of veteran suicide. Photo by Alan Brown

William Felty received the 22 Pushup Challenge in the fall of 2016. It was the year when the social media craze was sweeping the nation, similar to but on a smaller scale than the famous ALS Ice Bucket Challenge of 2014.

The idea was to do 22 pushups a day for 22 days, then challenge someone else to perform the same feat as part of a viral movement that ultimately attracted such celebrities as Dwayne “The Rock” Johnson, John Krasinski, Chris Pratt and Chris Evans. Why 22? The number came from an alarming 2012 U.S. Department of Veterans Affairs report that found that an average of 22 veterans a day commit suicide.

So William, then a psychology major at Alliant University, took on the challenge with the pride and urgency you would expect of a retired Marine, especially one who has battled post-traumatic stress disorder and alcoholism and even contemplated suicide himself. He did his 22 pushups in 22 days and documented his experience on social media to raise awareness of the problem. But the process left him unsatisfied.

“I noticed, as a veteran, that people still weren’t aware, and there wasn’t a lot of change coming that I could see,” William said. “So, I was like, ‘Maybe I should keep doing them every day, and it will remind me to be there for my fellow vets in their time of need.’ ”

Twenty-two days of pushups soon became 50, then 100, then 500. He still hasn’t stopped. On Wednesday, William, now a second-year Master of Social Work student at Cal State San Marcos, did 22 pushups for the 745th consecutive day.

“I plan to do it until I see the suicide numbers start to fall,” he said. “And even then I think I’ll still do it.”

William has come to call his personal version of the challenge the Battle Buddy Check-In, a reference to the term for a partner assigned to a member of the military for assistance both in and out of combat. As often as possible, he tries to do his daily pushups with a group – the largest has been about 12-15 people – as a means of starting a conversation about veteran suicide or just to encourage them to be there for others, whether a veteran or not.

During September, which is National Suicide Prevention Month, William did pushups on the CSUSM campus multiple times – including in front of the Veterans Center – with faculty members, administrators and fellow students. He frequently videos the sessions and posts them to social media to bring attention to the cause.

Brian Wier, like William a Marine vet who started in the Master of Social Work program last year, twice has done 22 pushups with William and took on the challenge himself for September based on his friend’s videos and to keep focused on his work as an intern working in mental health at the VA San Diego Healthcare System.

“William’s message and work is timely and important,” Brian said. “I am proud to be associated with him. He and I talk about this topic often, and we agree that even if just one person benefits from his message, then it was well worth the effort.”

William grew up in Lewisburg, Tenn., which he describes as a “few-stoplights town” 50 miles south of Nashville. He was only 16 and had just started his junior year of high school in 2001 when terrorists flew two planes into the World Trade Center. He knew right then and there that he wanted to join the military, but he had to bide his time for almost two years. 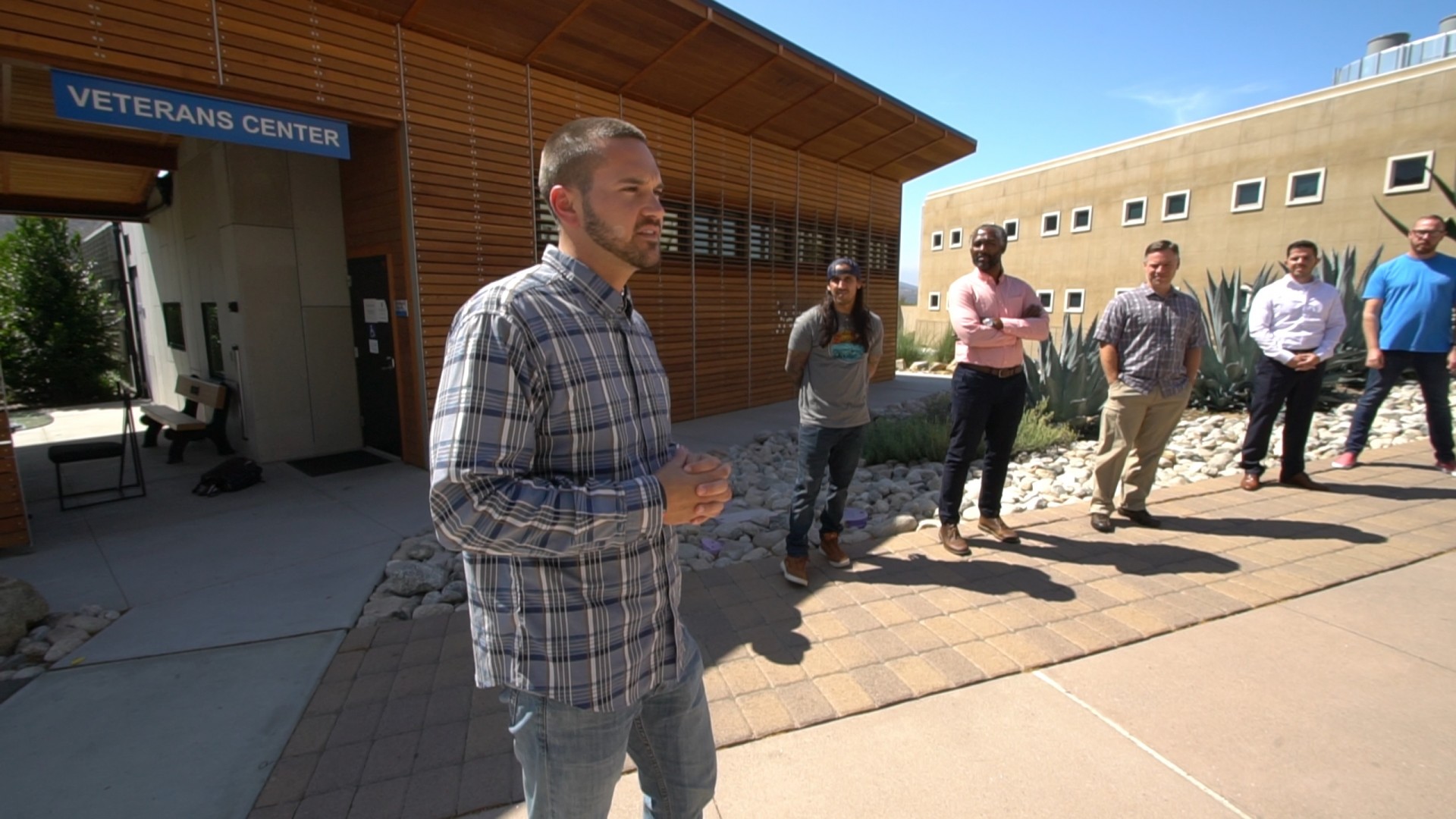 William Felty
The CSUSM master's student and Marine vet tries to do pushups with groups as often as possible to start conversations about veteran suicide. Photo by Alan Brown

After he graduated, William enlisted in the Marines and was trained as a motor transport mechanic. He was stationed in Okinawa, Japan, for just over a year before being transferred to Camp Pendleton. In February 2006, he deployed to Al Taqaddum Air Base (known as TQ in military shorthand) in Iraq as part of the Combat Logistics Regiment 15, charged with base security. As the months went by, the regiment’s duties expanded, and William ended up seeing more of the horrors of war than he had anticipated.

“I was able to finally be a Marine, but I didn’t realize what I didn’t know until it was too late,” he said. “When you see death in a way that’s unexpected, it shakes you up. Our platoon didn’t lose anybody and I’m grateful for that, but other units weren’t so lucky. I was not prepared psychologically to process some of the stuff we had to do and that I saw and felt.

“It’s only later that it hits you, when things de-escalate and the memories come back and you re-experience the feelings. I’m talking about when you wake up in the middle of the night and you have cold sweats because you think someone is after you.”

William returned to Camp Pendleton after 13 months, and ghosts of Iraq and of his past accompanied him home. He’s the oldest son in a family where physical and emotional abuse and alcoholism cast a pall over his upbringing, and in the military he got into trouble for multiple alcohol-related incidents.

By the spring of 2007, he was drinking just to be able to fall asleep at night. After he finally chose to seek help, he was referred to outpatient counseling at Camp Pendleton, where he was diagnosed with both alcohol dependency and PTSD.

“It didn’t surprise me,” William said. “It validated my experience, like ‘No wonder I’m so messed up.’ I did have it pretty bad. I didn’t stop drinking; I just tried to manage it. I was taking two steps forward just to take five steps back.”

The situation finally came to a head that December. Four days after he was discharged from the Marines, William was working as a bartender for a catering company and had a few drinks on the job. On the drive home, his tire blew out, and his car crashed into a concrete median. He escaped serious injury, but it was a sobering experience.

“That night,” he said, “I decided I needed to stop drinking.”

He started taking classes at Grossmont College, then pursued a two-year certificate program in alcohol and drug studies at San Diego City College. In 2011, he found a job as a substance abuse counselor, and since 2015 has run his own practice, Refined Transitions, which specializes in substance abuse prevention and intervention services. He got married in April.

William says he has not had a drop of alcohol since that wakeup call more than a decade ago, and that his PTSD is “under management,” though it’s “something I live with every day.”

And so he does 22 pushups every day, because it helps him stay vigilant, both in terms of his own roiling emotions and those of the battle-scarred veterans whom he encounters in all walks of life.

“I have never attempted to take my own life,” he said. “I have never wanted to physically kill myself, but I have contemplated many times being better off dead because it would be so much less painful.

Pushup Challenge a Nonstop Cause for CSUSM Student, Marine Vet