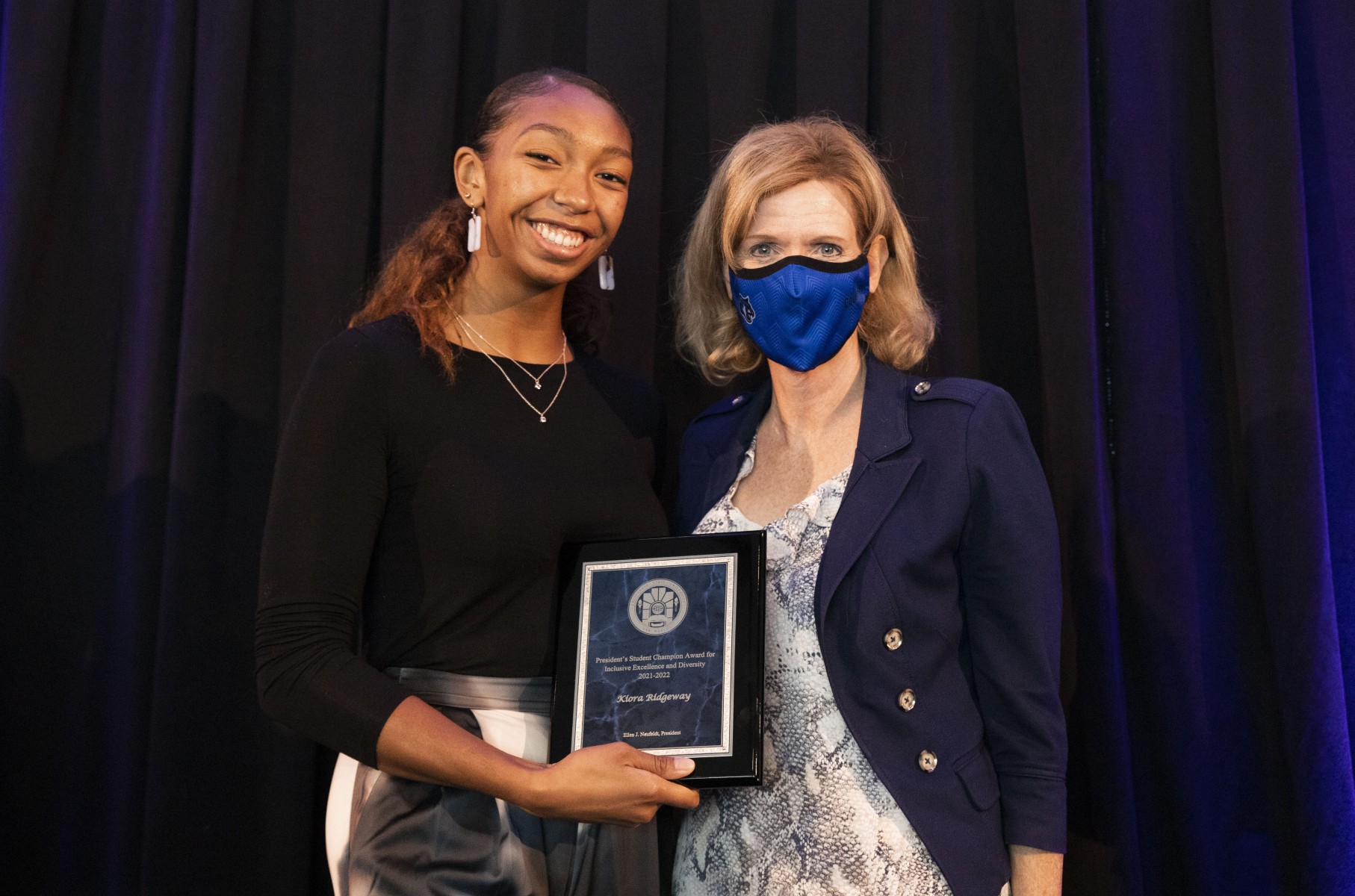 Like many Americans, Kiora Ridgeway took to the streets after the murder of George Floyd by a Minneapolis police officer in May 2020.

The Cal State San Marcos sociology student and volleyball player was in her hometown of Portland at the time, having completed her sophomore year at CSUSM. Several times that summer, she ventured downtown to join in some of the largest and most visible protests in the nation, with thousands of people making their voices heard and sometimes encountering police who deployed tear gas and riot gear against them.

Her feeling of empowerment was no summer dalliance. Over the ensuing weeks, she spoke multiple times with her coach, Andrea Leonard, and teammates about how to translate her newfound activist voice into action. When she returned to San Marcos that August, she seized on the momentum within the athletic department and pushed for progress toward increased diversity and inclusion.

As a result of her efforts over the past year, Ridgeway was selected this month as one of two winners of the President’s Student Champion Award for Inclusive Excellence and Diversity. She received the award, along with co-winner Ashley Gallardo, at CSUSM’s All Peoples Luncheon on Oct. 12.

“It's not ever something that I thought I would get any recognition for. That was never my aim,” Ridgeway said. “I think it's really special that the school has an award like this to recognize student effort to make this campus more equitable and enhance the student experience. I'm really grateful that it exists and that I was chosen.”

When Ridgeway came back from Portland in the summer of 2020, Leonard connected her with Jennifer Milo, director of athletics, who was receptive to hearing Ridgeway’s ideas about how to help effect change in the department. Milo appointed Ridgeway as one of several athletes on the newly formed Cougars Against Racial inEquality (CARE) Squad, designed to ensure an inclusive, safe and diverse atmosphere for student-athletes.

Ridgeway also was chosen to serve as the diversity and inclusion contact on the Student-Athlete Advisory Committee, through which she organized the athletic department’s statement of solidarity with the Black community after Floyd’s death. And she’s the only athlete from CSUSM, and one of only two in the 12-school California Collegiate Athletic Association, to be a member of the CCAA Diversity, Equity and Inclusion Committee.

Through her involvement with the latter group, Ridgeway developed a keen interest in diversity hiring practices that she brought back to the CARE Squad, working with the team to advocate for hiring committees with diversity as a major priority. With that focus in mind, the athletic department hired several assistant coaches last summer as competition was set to resume after a year lost to the pandemic, and Ridgeway is pleased with the outcome.

“I think Jen Milo took those points into consideration of really making sure that we don't just look locally, we look nationwide for people to come to a university that prides itself on diversity and protecting it,” she said. “It's making an impact where people are being intentional about that now – not just trying to show face, but really trying to take the time to look at how diversity can enhance an institution.”

Kiora Ridgeway speaks at the All Peoples Luncheon on Oct. 12 after receiving President’s Student Champion Award for Inclusive Excellence and Diversity. Photo by Andrew Reed
Ridgeway is a senior outside hitter and middle blocker for the CSUSM volleyball team. She transferred from Long Island University in 2019.
"It's not ever something that I thought I would get any recognition for. That was never my aim," says Ridgeway, pictured signing autographs in The Sports Center.

Ridgeway imported other ideas to the CARE Squad, such as creating an open forum for student-athletes and department staff to discuss social justice and cultural diversity, and improving the collaboration between athletics and Student Life. To that end, she organized a wellness and equity resource fair that was held outside The Sports Center in late August. The fair featured student-athletes from every sports team mixing with representatives from all five Student Life Centers for Identity, Inclusion and Empowerment; Student Health and Counseling Services; and many other student organizations.

Ridgeway was inspired to lay the groundwork for the event by her experience upon transferring to CSUSM in 2019 from Long Island University, which had moved to cut the volleyball program the previous year. She had been part of the Black Student Union at LIU and hoped to recreate that experience at her new school. But it proved to be harder than she expected.

“I went in to the Black Student Center, and I was super intimidated,” Ridgeway said. “Not that I felt uncomfortable, but it was really hard for me to try to introduce myself and get myself acclimated in that space. My goal with the resource fair was to remove that intimidation factor, and I think it was really successful in making that connection between student-athletes and everything this campus has to offer.”

Leonard, who nominated Ridgeway for the Student Champion Award, was struck by the drive that Ridgeway carried back from her summer of protest in Portland.

“What impressed me was her commitment and her sense of urgency to act,” Leonard said. “She was involved and suggested things, created dialogue and established connections immediately without being guided. Kiora has the ability to bridge gaps, create understanding and provide unity in times of uncertainty.”

Ridgeway credits that ability in part to her family and her hometown. The daughter of a Black father and a Filipino mother, she was exposed to a wealth of cultural diversity as a child. She attended a Catholic grade school and high school that drew from a wide range of races and ethnicities.

“I got all ends of the spectrum growing up,” she said. “Coming here, I wanted to bring that along, experience as many different people as I could. Portland has definitely influenced me in that way.”

Ridgeway had been aiming to complete her degree in May, but she’s enjoying her return to collegiate volleyball so much that she’s leaning toward playing one more season next fall and graduating that December. A Spanish minor, she afterward plans to pursue a Spanish immersion program in Central America. Her career ambition is to work as a community outreach coordinator for a sports team.

“The work I’m doing now has helped me realize that I want to help people in the community,” Ridgeway said. “I would love to be a bridge between professional athletes and them working in the communities around them. I want to highlight marginalized people and help them get more opportunities while being around sports.”