Foster a Chip Off the Old Basketball Block 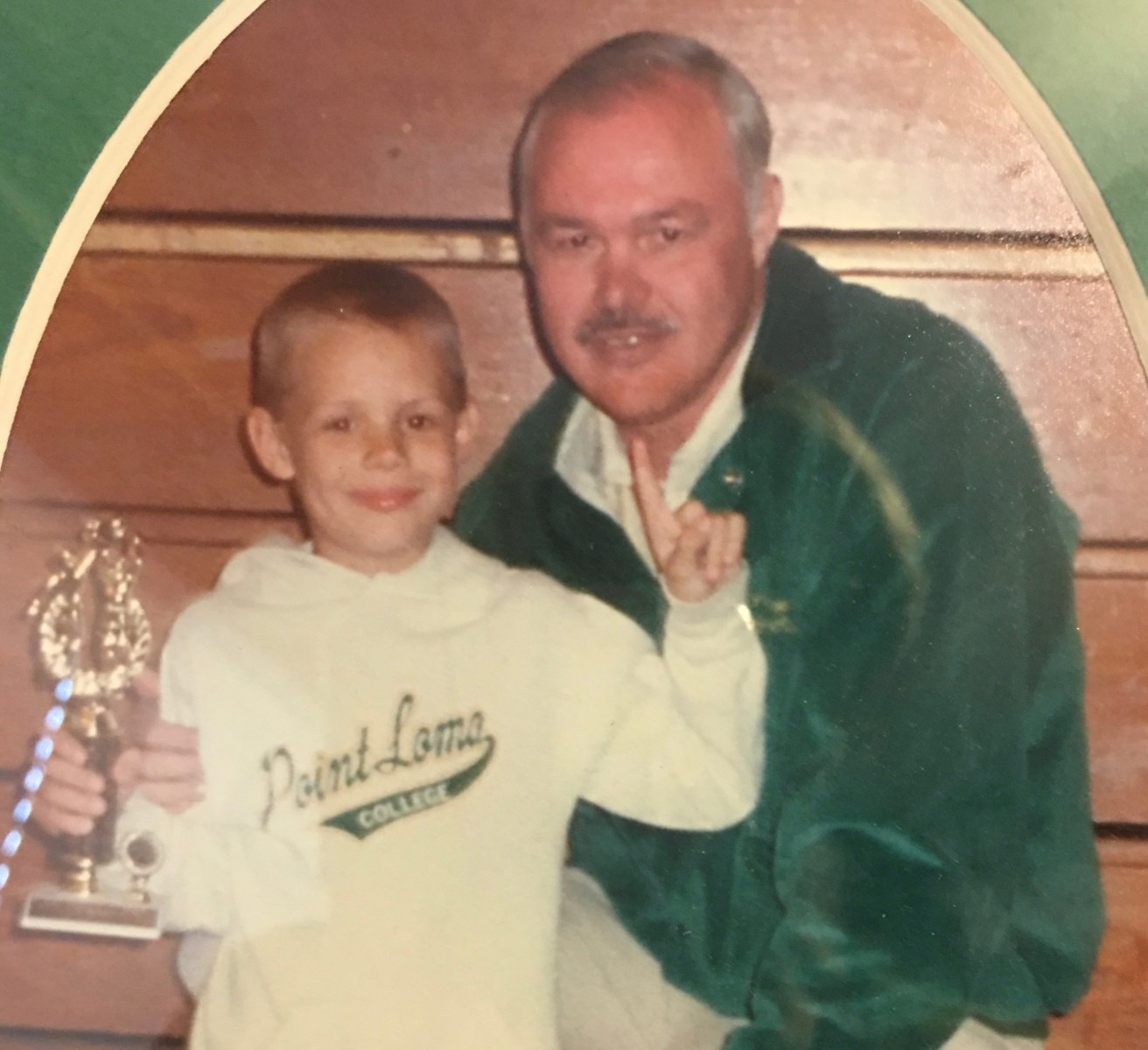 When Cal State San Marcos coach B.J. Foster settles into his bus seat for a men’s basketball road game, don’t fault him for leaning back and relaxing. After riding in the storage area for years, that leather seat feels pretty good.

“We used to throw him a pillow and put him up in the luggage rack when he was a kid with his brother,” said his father, Ben Foster. “There were times my wife pulled several of the players aside and told them to watch those two. She was worried I would be thinking of a game situation and forget they were there.”

As Father's Day approaches, it’s hard not to remember the good times B.J. had his with his father, a longtime Point Loma Nazarene University basketball coach. There were bus trips, getting ribbed by players and more importantly, getting a chance to hang with pops. After being exposed to the ups and downs of being a basketball coach through his dad, the ball didn’t fall far from the rim.

“I always did know that I was going to coach because I just loved the game from a young age,” said B.J., who recently finished his second season as the Cougars’ head coach and fifth with the school. “I used to go and travel with his teams when I was a little guy and get to sit on the bench when he was coaching. By just being around the game my entire life, it becomes a big part of your life.”

“In junior high, high school, really the whole time the topic of conversation over the dinner table was basketball,” Ben said. “Then he would go out and watch other games with me. It was just a big part of our life.”

The Point Loma contests were bigger than life for the young Foster. He father retired in 1992, after serving as the head coach for 17 years and an assistant for six.

“It was a lot of fun because when you were a kid the players didn’t look any different than if they were in the NBA or in a small college,” B.J. said. “They were all giants to me. But what I really remember was the intensity of the game and how passionate the people were that were playing.”

Maybe because it leaked down from their self-described “old-school coach.” The elder Foster was into it and so were his charges.

“You could see how passionate he was about it because he really cared a lot,” B.J. said. “His teams were always disciplined and really deliberate in going out there and playing really hard.”

B.J., who played at Point Loma before starting his coaching career, displayed an edge, too. Although as a tyke his big moment came at halftime when Ben and squad were in the locker room.

“I just wanted it to get to halftime so I could go out there and shoot,” B.J. said.

And if Ben delayed his son’s opportunity to shine, he often got a stink eye from his kid.

“Any time he called time out right before the half, it just would drive me crazy,” B.J. said.

What brings a smile then, and now, to both Fosters is talking about the coaching benefits that don’t reveal themselves on a bank statement. It’s those relationships that are nurtured over years -- and sometimes tough times -- that brings with them joy.

“Let me tell you, only in education and coaching does that happen,” Ben, 71, said. “In coaching, feedback doesn’t usually come until later in life. I have former players call me or come by all the time and that is very neat and very rewarding. That is what is so special is the idea that you really get to interact with young people and hopefully point them in the right direction.”

B.J. took note of his father’s moral compass and how his players’ compass always pointed in a similar direction.

“So many former players would come back at homecoming or come by the same house that they have lived in since I was little kid, right next to the campus, to see him,” B.J. said. “Players from 10, 15, 20 years ago, from different eras, they would want to bring their family back to meet him. Those players that came back to see him really made an impression on me on how a program should be run. He was trying to influence the players and make a difference in their life, and that always stood out.”

B.J. shares some strategic coaching philosophies with his father, but it was his bond with his players that was undefeated.

“Those are the things that stick out and that is how you want your players to feel,” B.J. said. “Like they have a home and a support system for their life, and that is what we are trying to do here. It’s in the realm of teaching, caring about your players and hoping you can set them up to have a great future.”

When thinking of the past, both Fosters mention how blessed they’ve been. To share not only a father-son relationship but one that includes basketball. Although with their roles reversed -- with Ben watching and B.J. coaching -- the games are just as nerve-wracking.

“It is a little harder than when he was playing,” Ben said. “He was a pretty good player, a smart player, and it felt like he had a better control of a game than now when he’s coaching. I do probably struggle with it a little bit more now because I know when you’re coaching, you’re pretty much helpless.”

Helping others, and their love of basketball, is a trait these men share.

In its return to the court after an 18-month hiatus because of the pandemic, the Cal State San Marcos women's basketball team has gotten off to a 4-2 start this season, including a 2-1 mark in …
Read more

After being sidelined for more than 18 months because of the pandemic, the Cal State San Marcos men's basketball team has come charging out of the gate like a caged beast.The Cougars have won …
Read more
NewsCenter

Foster a Chip Off the Old Basketball Block