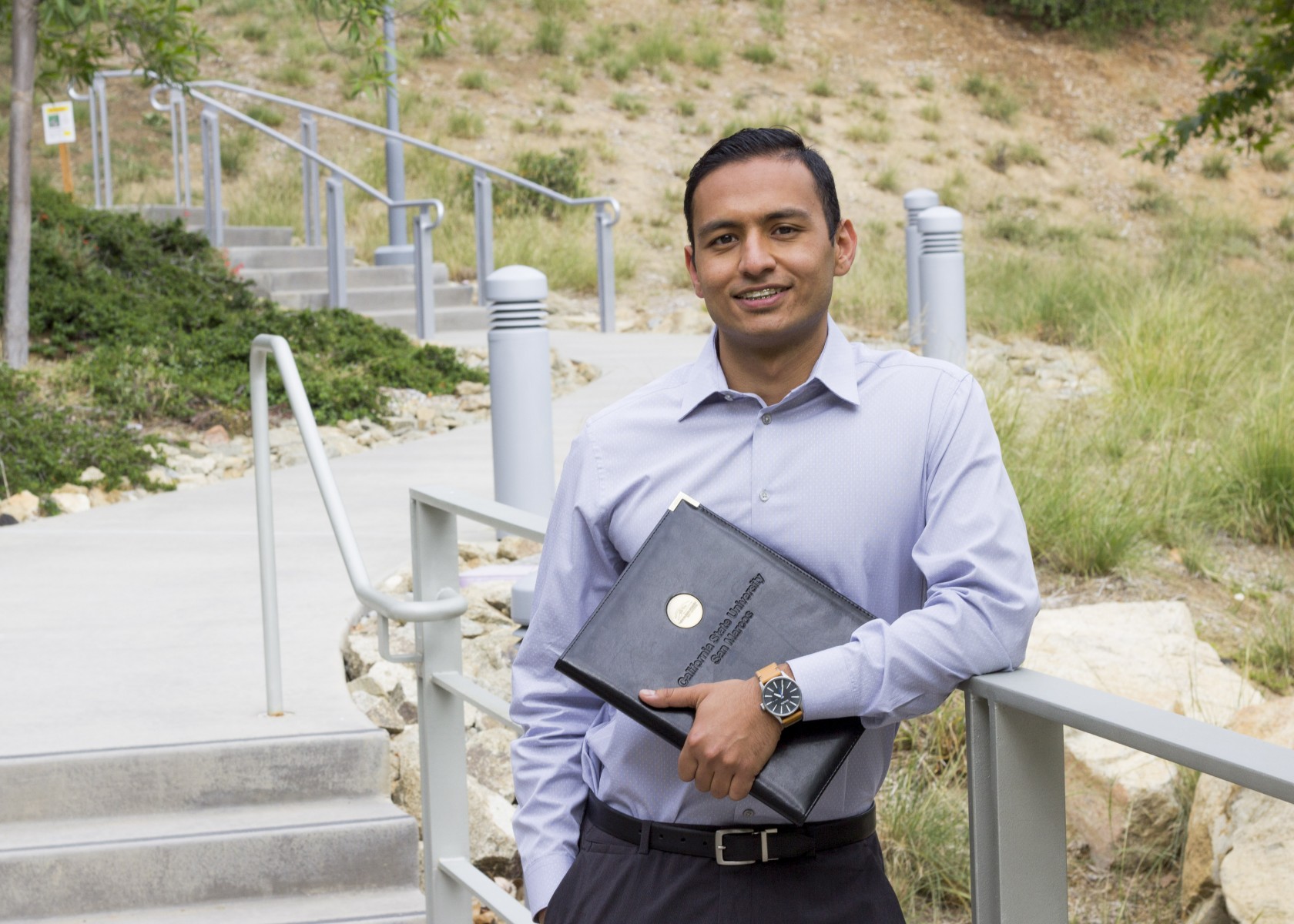 Aimal Laiq
Aimal Laiq, a graduating senior this spring, was forced to flee with his family from Afghanistan and Pakistan in the 1990s.

A refugee from Afghanistan who later was forced to flee with his family from Pakistan, Aimal Laiq has finally found a home at Cal State San Marcos. Now he is on his way to graduate school for a master’s degree en route to a career in transportation planning.

Laiq will be among the CSUSM students graduating on May 16. It will be tough to leave.

“My whole experience at Cal State San Marcos has been wonderful,” Laiq said. “It’s a tight community and not that big of a campus. You’re not lost among 30,000 students so you’re always running into people you know and you’re meeting people with different interests and studying different subjects than you. Plus, the professors here truly care about their students’ education.”

Benjamin Nienass, an assistant professor of Political Science, is among the instructors who care. Nienass had no hesitation when Laiq asked him for a letter of recommendation while applying to graduate school at San Diego State University.

“I have absolutely no doubt about his dedication and I am certain he will have a wonderful future,” Nienass said. “Aimal has a strong sense of curiosity and brings an eagerness to learn to the classroom.”

Just getting to CSUSM was an adventure.

Laiq’s father was a speechwriter for the then-president of Afghanistan, Mohammad Najibullah, when Laiq was born in February of 1988. But Najibullah was backed by the former Soviet Union and reigned as Soviet troops were withdrawing from the country. The Mujahedeen ousted his Russian-backed government in 1992, and Laiq’s family fled to Pakistan with the help of the United Nations.

Pakistan was safer—at least for a while. But Laiq’s family spent the first few years in their new country living in a converted stable.

“I wouldn’t say they were horrible conditions, but they were pretty bad conditions, at least when we first got there,” he remembered.

Still, Laiq’s parents sent him to a private British school, where he learned English. And Laiq’s father put his entrepreneurial skills to work in opening a carpet factory.

As political upheaval continued roiling the region, though, the Laiq family had to flee once more. Laiq’s father was put on a hit list because of his work with Najibullah.

The United Nations again helped the family flee, this time to San Diego, where an uncle was living.

That was in 1999. For the second time in seven years, Laiq found himself adjusting to life in a foreign land with no friends.

“As you could imagine, I didn’t fit in right away," Laiq said. "I always played sports, but the sports I played in Pakistan they don’t play here—I was really into cricket.”

Adjusting to the American education system wasn’t easy, either.

“I wasn’t a great student to begin with, so I had my challenges,” he reflected.

Meanwhile, the family was trying to survive. His father worked as a cashier at a gas station and a 7-Eleven while studying at nearby Miramar College to improve his English. His mother, who had a master’s degree, was working at a McDonald’s to help the family make ends meet. Ultimately, their fortunes turned. Laiq’s father, who also had a master’s degree from Rostov State University in the former Soviet Union, found a job teaching at the Defense Language Institute in Monterey, California. It was hard on the family, as Laiq’s father was gone during the week, but Laiq was adjusting well to school, even playing on the football and basketball teams at Westview High School.

His sights set on becoming a paramedic or EMT, Laiq enrolled at Palomar College after graduating from Westview High School. But after an internship with an ambulance company, he soured on that career choice.

Then he found his calling.

“I really, really liked political science,” Laiq said. “Everything kind of clicked. I started taking school more seriously. I finished my studies at Palomar, transferred to Cal State San Marcos, and I declared a major in political science. It was the best decision I made.”

Laiq wasted no time in getting involved. He was a charter member of the Model U.N. club at CSUSM. Less than a year after it was founded, CSUSM’s Model United Nations went to international competitions in Washington, D.C., and New York, returning with coveted honors for Outstanding Delegation and Outstanding Committee Delegates.

“I originally became involved in the Model U.N. program to get connected with the campus, but also because the U.N. was close to my heart because it gave us refuge and helped bring us to the United States.”

“Living in a few different countries has enabled him to reflect a little more critically at different political systems,” he said. “He’s open to different ideas.”

Now he’s off to SDSU. While he’ll be earning a master’s degree in city planning, Laiq wants to focus on transportation. Eventually, perhaps, he’d like to serve on a city council.

“I want to have a positive impact in my community.”