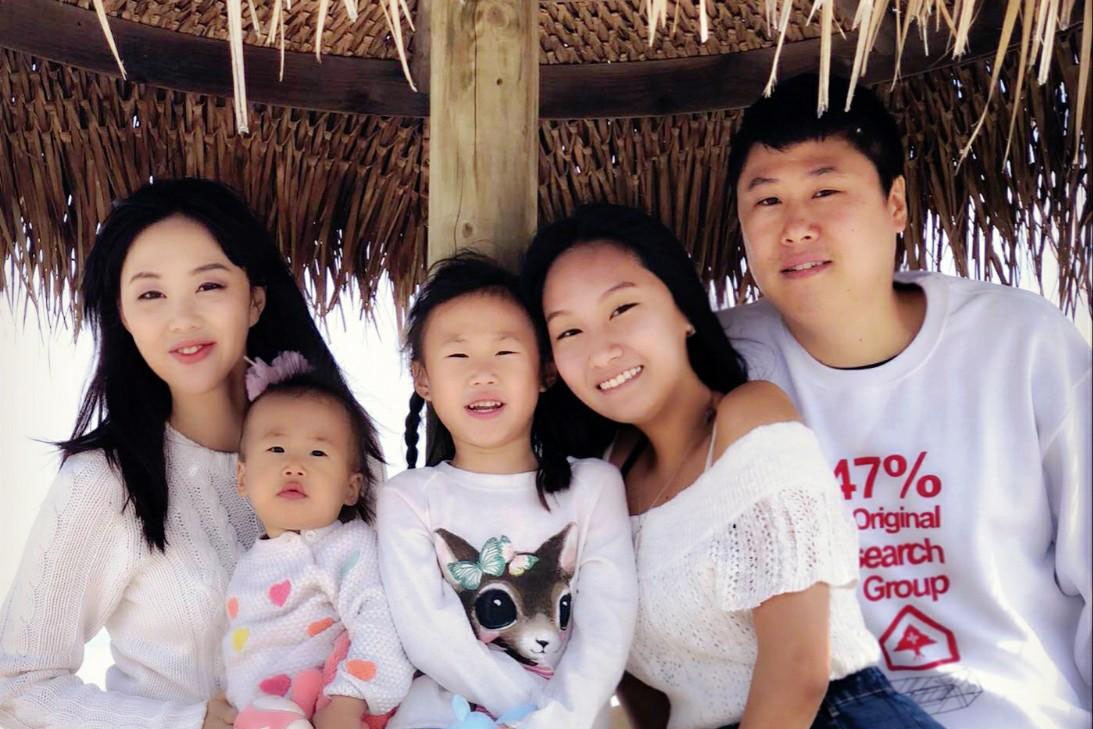 M.J. Lee (left) is among the CSUSM student veterans who received a $500 gift card and boxed meals as part of a holiday giving campaign initiated by Kaiser Permanente and its construction arm. Also pictured are Lee's husband, Yoon Seo (right), and her three daughters: (left to right) Chloe, 4, Hailey, 8, and Ji Seo, 19.

M.J. Lee already was struggling acutely with the effects of the coronavirus pandemic as the fall semester at Cal State San Marcos drew to a close.

It was hard enough for Lee to juggle a heavy class load in biological sciences as she felt the pressure to try to graduate from CSUSM this spring, within a three-year hiatus from active duty granted by the U.S. Navy to pursue her education as part of its Career Intermission Program.

On top of her academic stress, she has been balancing the demands of motherhood, caring for her 4-year-old daughter while helping her two older daughters – 8 and 19 – navigate virtual learning. Her husband, a Navy veteran, was out of work for an extended period because of the perilous nature of his job as a dental hygienist. She even had to drop everything this fall to assist her aunt as she prepared for and recuperated from cancer surgery.

Then, with Lee’s husband having returned to work and her school demands gradually easing, COVID-19 delivered yet another blow. The dental clinic shut down again, leaving the family financially strapped just as her housing allowance through the GI Bill was expiring at the semester’s end.

“It’s been pretty devastating, to say the least,” Lee said of the personal impacts of the pandemic.

So, when Lee recently saw an email pop into her inbox offering student veterans who qualify the opportunity to receive some much-needed financial assistance in time for the holidays, she overcame her aversion to charity and seized on the chance. This week, she will pick up a $500 gift card and some ready-made meals that will contribute to making her family’s Christmas a little bit brighter.

“I was ecstatic when I found out,” she said. “I didn’t know what to say. I thought I would probably have to reach out for some sort of help, and this came along at just the right time.”

Lee’s reaction is no doubt music to the ears of the generous donors who made this last-minute campaign possible. It all started just last month when the newly formed project team that’s building the hospital for Kaiser Permanente in San Marcos decided that it wanted to support veterans and transitioning military members for the holidays.

The team reached out to Tana Lorah, the senior manager of government and community relations for Kaiser Permanente San Diego, who in turn reached out to CSUSM, knowing how integral veterans and military-connected students are to the university. The original intention was to donate gift cards to assist five to 10 families along with 50 boxed meals. 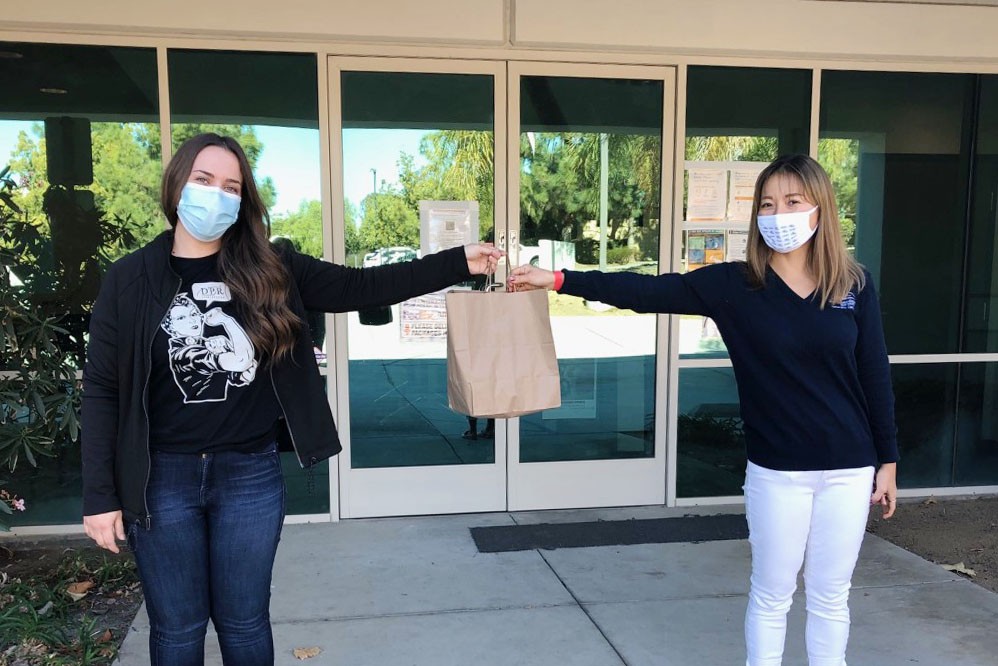 Shin Ae Kook (right), communications and outreach manager for CSUSM Veterans Services, picks up the gift cards for student veterans at the warehouse for DPR Construction in Escondido. At left is Christina Louros , a DPR project engineer who oversaw the fundraising campaign.

That’s when things started to snowball. CSUSM Veterans Services sent a message to its students with a form by which they could request assistance – either a gift card or a meal or both, depending on whether they were a veteran or a military dependent. The response was overwhelming. Within seven hours, more than 100 requests had been submitted.

“It was way more than we anticipated,” said Scott Gross, interim director of Veteran Services. “It does make you pause and say, ‘Wow, what a reminder of how this is so difficult for so many.’ And what surprised the staff is that veterans tend to be proud and resilient people, so there can be some resistance to asking for help.

“We knew there was a need, but we didn’t realize the scale.”

When it learned of the substantial need among the CSUSM student veteran population, the Kaiser Permanente project team scaled its efforts up accordingly. DPR Construction, the general contractor for the hospital, allocated a staff member to organize and gather the donations. From a small adopt-a-family model, the initiative grew to the point that the project team gave $23,600 in gift cards and 200 meals.

“This is the team’s way of giving back and saying thank you for the opportunities we’ve been given,” said Joseph Stasney, Kaiser’s national director of hospital design and construction, who led the giving campaign with DPR executive Lucy Villanueva.

“We have been very fortunate, and this year it is especially important to reach out and help those who are certainly in need. As part of this wonderful group of people, I can tell you it came from the hearts of everyone.”

As the momentum began to build, CSUSM’s division of University Advancement joined the fray, enlisting donors to help support the cause. The Epstein Family Foundation, which gave the money that built the veterans center at CSUSM, made a lead gift to provide additional support to students, and other donors chipped in for a combined total of more than $16,000.

The final tally: $500 gifts for 79 student veterans and 345 boxed turkey dinners for military-connected students and their families – just in time for the holidays.

“In addition to being grateful for the generosity of these donors, I am proud of the CSUSM team that we were able to mobilize as quickly as we did, get a sense from our student veterans about what their situation was, and then turn around and provide the gifts quickly,” Gross said. “With a bureaucracy like ours, as big as we are, that’s not an easy thing to do. But the whole time we’ve been working through the questions, what’s motivating us is the knowledge that this is going to make someone’s holiday. This is going to put a smile on kids’ faces. It’s going to mean some of our students having a meal when they weren’t going to otherwise.”

With all the adversity she’s dealing with, Lee wasn’t planning to cook a big meal for Christmas. She doesn’t think her girls would have minded, but now she won’t have to worry about it. As for the gift card, she intends to devote the $500 to the family’s grocery budget, helping to allay their food insecurity and giving her one less source of stress for the holidays.

“This assistance will be a really huge help for us,” Lee said. “I cannot thank the people enough for allowing my family and other student veterans to have a little bit of relief in this harsh time.” 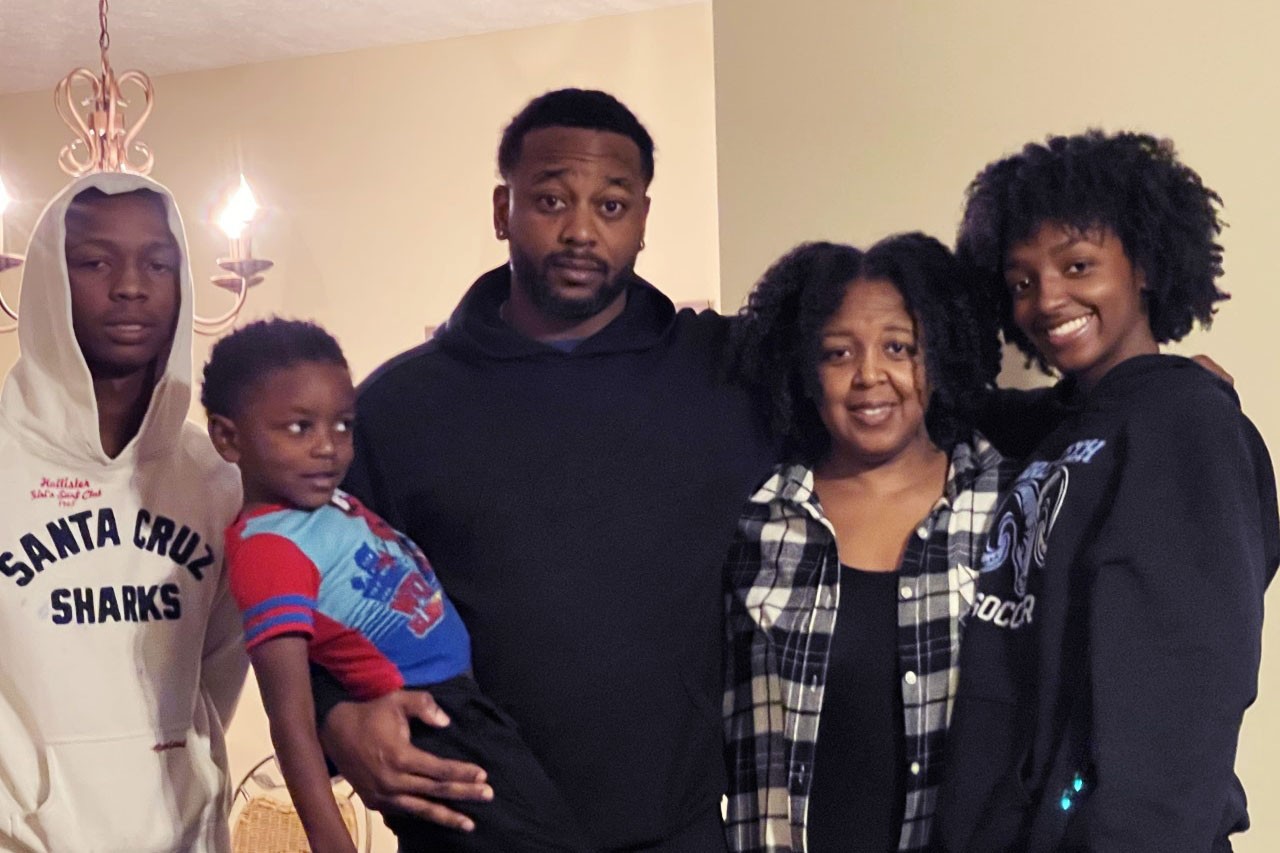 Thomas Taylor (center) is another of the CSUSM student veterans who benefited from the holiday giving program. Taylor, who served in the Marines for 14 years before being discharged in 2016, moved back home to Alabama around Thanksgiving because he could no longer afford his rent due to financial troubles from COVID-19. He's on track to graduate this spring with a degree in social sciences. He's pictured with (left to right) his brother Jacob, his son Malachi, his mother, Cynthia, and his sister Naomi.

Like many Americans, Armando Manzo remembers the smallest details of where he was and what he was doing on the morning when terrorists steered two jet planes into the Twin Towers.He was a high school …
Read more
NewsCenter