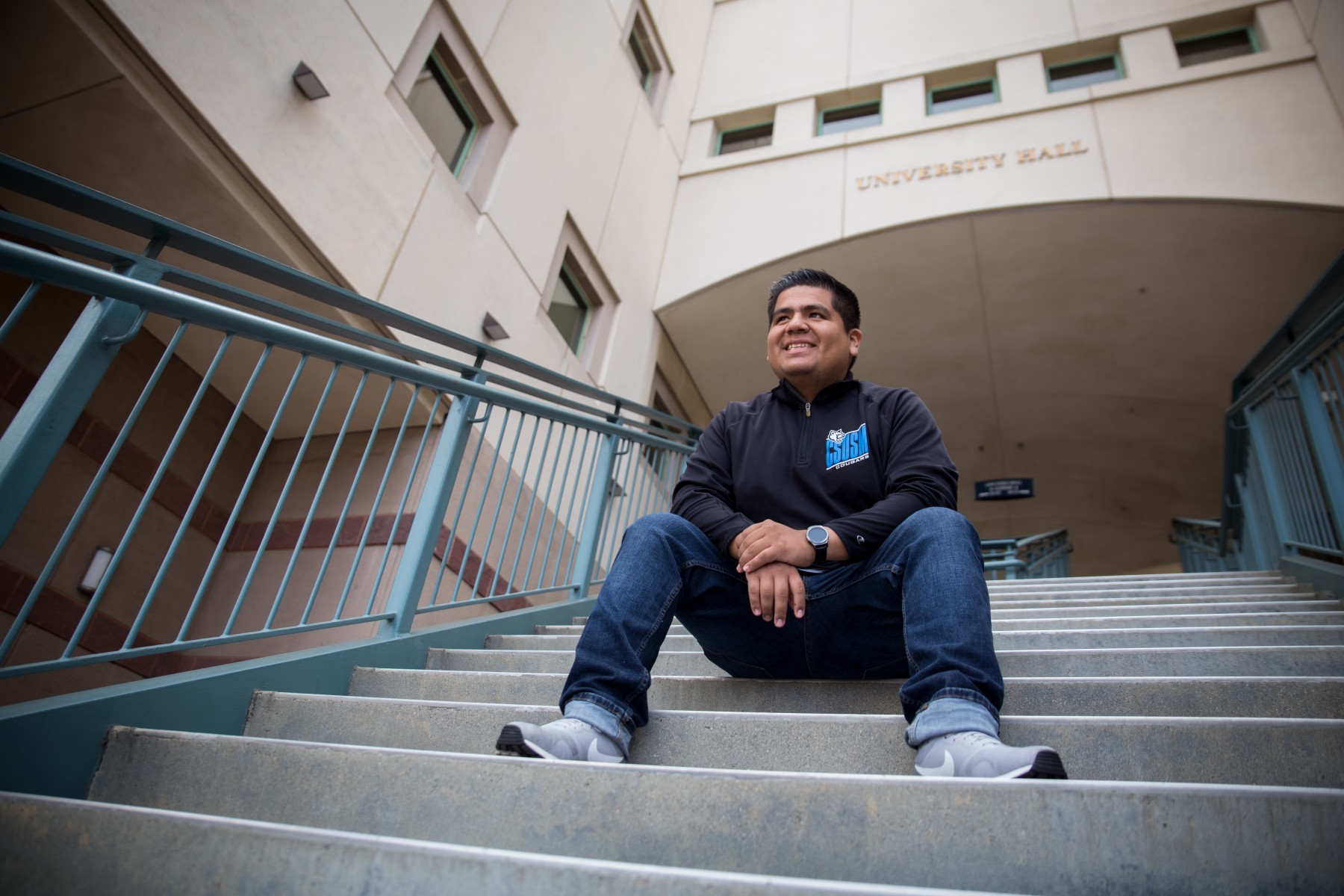 Carlos Olivares had a difficult time adjusting to life in the United States after moving from Mexico when he was 9.

“I struggled a lot growing up,” Carlos said. “I struggled adapting to a new culture and I rebelled quite a bit.”

The struggles continued into his freshman year at Escondido High School where his grade-point average was just 1.25 that first year.

Needless to say, college wasn’t on his radar back then. He wasn’t even thinking about graduating from high school.

“My goal was just to break necks in football,” he said. “I was angry.”

Carlos overcame that anger and those struggles, becoming the first in his family to attend college. He will cross the commencement stage at Cal State San Marcos next month after earning his bachelor’s in human development.

Carlos credits his turnaround to a high school counselor. First, she put him on a program to recover lost credits from his freshman year. By the end of his sophomore year, his grade-point average was 4.0. As a junior, Carlos started taking Advanced Placement classes and began to think about attending Palomar College. It wasn’t long before he set his sights on a four-year university. He was accepted to all five universities to which he applied, but there was little doubt that he would choose CSUSM.

Though Carlos said he struggled again during his first year at CSUSM, he was better equipped to handle those struggles. He credits CSUSM’s Personalized Academic Success Services (PASS) for helping him hone the skills he needed to be successful in college.

Carlos’ efforts culminated in a trip to Chicago in March for the annual Scientific Meeting of the Association for Applied Psychophysiological and Biofeedback.

CSUSM professor Eliza Bigham, Carlos’ HD 497 instructor, recommended that he attend the conference to present a project titled “iCare Health Monitor Phone App vs. Traditional Portable Pulse Oximetry.” The project compared the accuracy of the iCare application to a pulse oximeter by examining heart rate and oxygen levels in blood cells, or SpO2.

The results found the iCare’s heart rate measurement to be accurate when compared to the pulse oximeter, but inaccurate when measuring SpO2.

“The most amazing things happen when students go to conference,” Bigham said. “Carlos, for example, was not sure if he should go and I could tell he was a little uncomfortable knowing that he was going to have a presentation of his research project.”

Carlos serves as a teaching assistant for Bigham on a similar project. He received experience presenting at last year’s Nu Upsilon Research Conference (NURC) and he helped the groups that will be presenting at this year’s NURC event on May 4. The event is from 3:30-6:30 p.m. at Markstein Patio and is open to the public.

“Carlos put all of what he learned as a teaching assistant and also on his research team last semester into this iCare poster, and it turned out wonderful,” Bigham said. “I had so many comments from attendees that they were impressed with his understanding of the project and with his excitement about research in general. It was as if he had found something new and exciting and realized that he could have a significant place in that. I know that Carlos will continue to reach new heights with each step that he takes. And I look forward to continuing to support and applaud him as he goes on this journey.”

Carlos plans to pursue his master’s and would like to eventually work as a school psychologist so that he can positively impact lives like his high school counselor did for him.

But before continuing his education, he wants to make a difference close to home.

“I need to make an impact here first,” said Carlos, who works as a sports coordinator for Rincon Middle School in Escondido and also interns for Escondido Union High School District. “I can’t just leave my community behind after it’s done so much for me.

“Graduating from college is a great accomplishment and I’m proud of it. But I’m not done yet.”