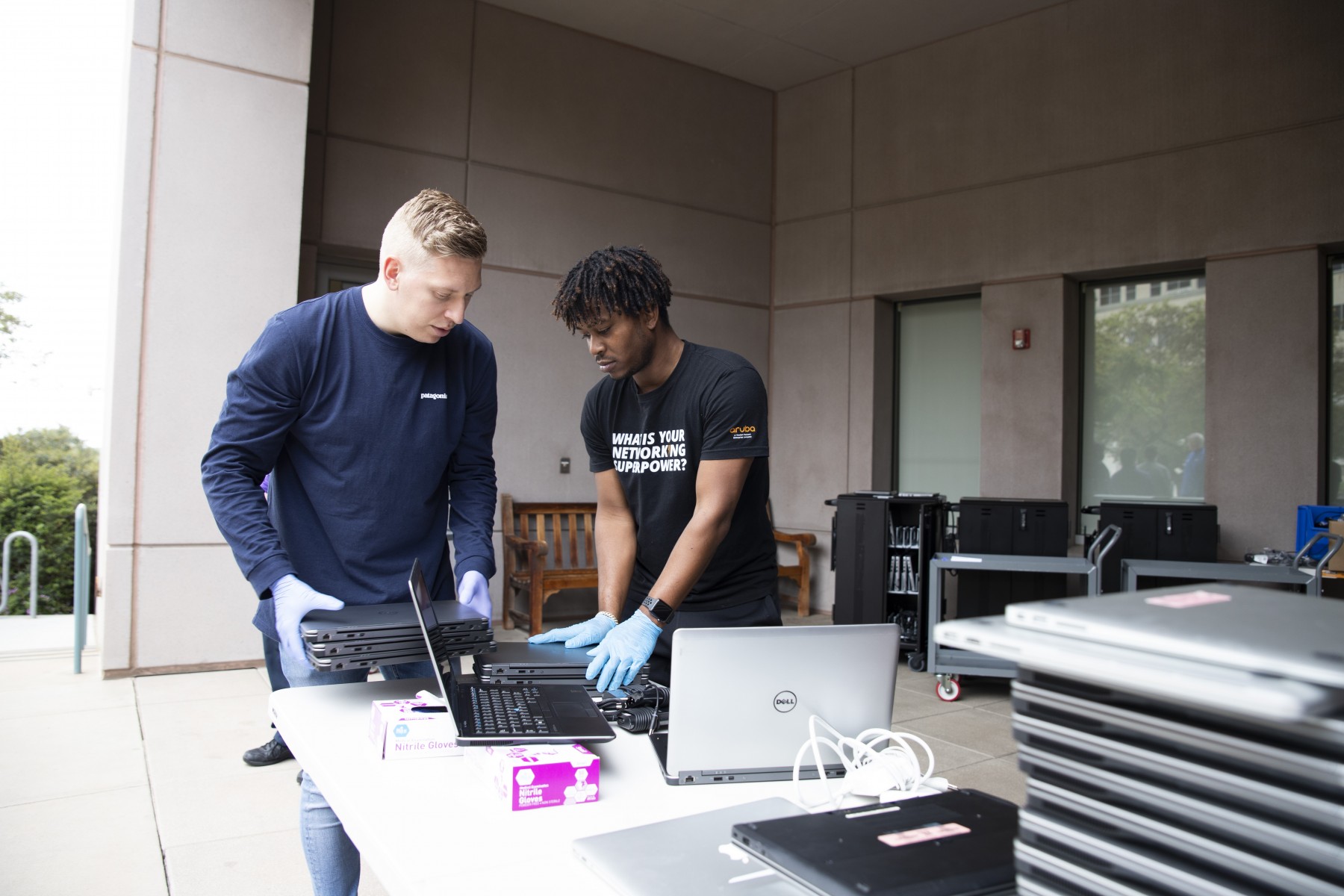 If you had driven up to Craven Circle on the morning of Monday, March 16, you could have been forgiven for thinking you had stumbled upon a pop-up Sonic Drive-In.

For hours on end, car after car pulled into the circle, many of them parking perpendicular to the curb, rather than the usual parallel style. But instead of being approached by a server on roller skates, the drivers were greeted by an employee from Cal State San Marcos’ Instructional & Information Technology Services (IITS) department.

This was the first Monday after standard operations at CSUSM had ceased, when the coronavirus outbreak had forced the university to move classes to a virtual environment for the rest of the spring semester, and IITS had mobilized to deal with the resulting crush of requests for equipment – the laptops, monitors, keyboards, headsets and other devices that students, faculty and staff would need at home during this new normal.

IITS originally planned for two days of distribution, but after Tuesday turned into a marathon 12-hour session, the department scheduled three more. By the end of the fifth day, covering almost 33 total hours, it had handed out more than 1,000 pieces of equipment to more than 400 members of the campus community. In all, over 30 IITS employees were directly involved in supporting the effort.

“I’d say those were the five most rewarding days since I’ve been at Cal State San Marcos,” said Kevin Morningstar, the dean of IITS and chief information officer of CSUSM, who has worked at the university since 2015. “If you were there, you saw how much this meant to some of the students – they were so emotional and grateful. We do a lot of important things day in and day out, but when you see the almost desperate level of need in some people and you’re able to help them and be a calming influence, that feels good.”

IITS has been going above and beyond to inspire widespread feelings of calm and gratitude since the impact of the COVID-19 pandemic struck CSUSM. From wiping laptops and distributing equipment to helping faculty make the transition to virtual instruction to ensuring that the underlying systems hum along, the department has been at the forefront of the effort to keep the university running as smoothly as possible during this unprecedented time.

“IITS has always kind of been the wizard behind the curtain,” said Barbara Taylor, the director of Academic Technology Services. “But I think now people are really seeing that there are a lot of people involved who help the campus that they might not realize.”

IITS snapped into action as the threat of the virus grew more serious in early March. Taylor’s ATS team began working on how to ramp up training for Cougar Courses, the university’s learning management system, scheduling workshops in anticipation of faculty requiring assistance. Over the next two weeks, ATS helped more than 300 campus employees – either in person or, later, virtually – with things like how best to use Cougar Courses in an online environment or how to take advantage of all the services offered by Zoom.

The need for help is ongoing, and Taylor expects a surge in requests this week now that faculty members have returned from spring break and had time to reflect on their virtual teaching experience so far.

“We’re seeing new faculty that we haven’t worked with in the past coming to us now, which is a good thing,” she said. “And we’re trying to help them figure out how to teach similar material as they’ve taught before, just in a different way. For example, we’ve had group meetings on how to use Zoom for students to give presentations live.”

While Taylor’s group was preparing faculty for the shift to virtualized instruction, Nicholas Duarte’s team in Technology Support Services was scrambling to gather up equipment from classrooms across both the San Marcos and Temecula campuses that ended up being distributed at Craven Circle. TSS collected about 500 laptops that had been used in various classrooms and labs. But it wasn’t enough just to round them up. Duarte and team also had to wipe clean the hard drive of each computer and reload with a fresh operating system and programs so that each recipient would essentially be getting a brand-new machine.

“Hundreds of these are less than a year old, so it’s very nice equipment,” said Duarte, the director of TSS. “We provided it to faculty and staff and students to use however they need to, as if it were their own piece of property.”

IITS responded to the crisis in other ways that might be more under the radar. Bill Craig, a longtime CSUSM employee, was appointed director of operations on the very same day that the department initiated its emergency plan. He immediately went to work on readying the university in terms of telephone services and network operations. Along with bolstering the capabilities of the data center to handle the coming load on Cougar Courses, Craig and his team enabled other features to make the transition easier for the campus community, such as extending password expiration parameters and automatically sending employees’ office voicemail to their email accounts.

Last week, IITS also completed the setup for a new service that will allow CSUSM to re-establish phone services for selected departments. This system will forward main numbers to a virtual queue that will ring remotely on the computer of the staff members charged with answering the lines for Cougar Central and other offices frequently contacted by students.

“So for students and parents calling about their financial aid, for example, they’ll still call the same number they’re used to calling, the one that’s published, and this mechanism will get them in touch with the people who need to answer those calls but can’t be at their desks to do so,” Craig said.

COVID-19 has dictated, and IITS has helped facilitate, a work environment that would scarcely be recognizable to the campus community even a month or two ago. In the last week of March, the cumulative number of Zoom minutes at CSUSM increased by 3,200% over the week of Feb. 17. The use of Microsoft Teams is also changing the way CSUSM administrative and academic departments, committees and working groups communicate and collaborate with each other. The adoption has been huge, as more than half of Teams were created in March alone, and the number of private messages sent per day has nearly quadrupled.

“I think we’re not going to go back to the same university we had to walk away from a few weeks ago,” Craig said. “There’s too much new knowledge, too much we know about our technical and personnel capabilities to go back to that. I think we’re going to find a lot of transformation at a lot of different levels. That’ll be exciting and a little uncertain, but I’m looking forward to it.”

Whatever direction CSUSM goes from a technology standpoint, IITS will be leading the way.

Visit the IITS For You webpage for resources available to students, faculty and staff. 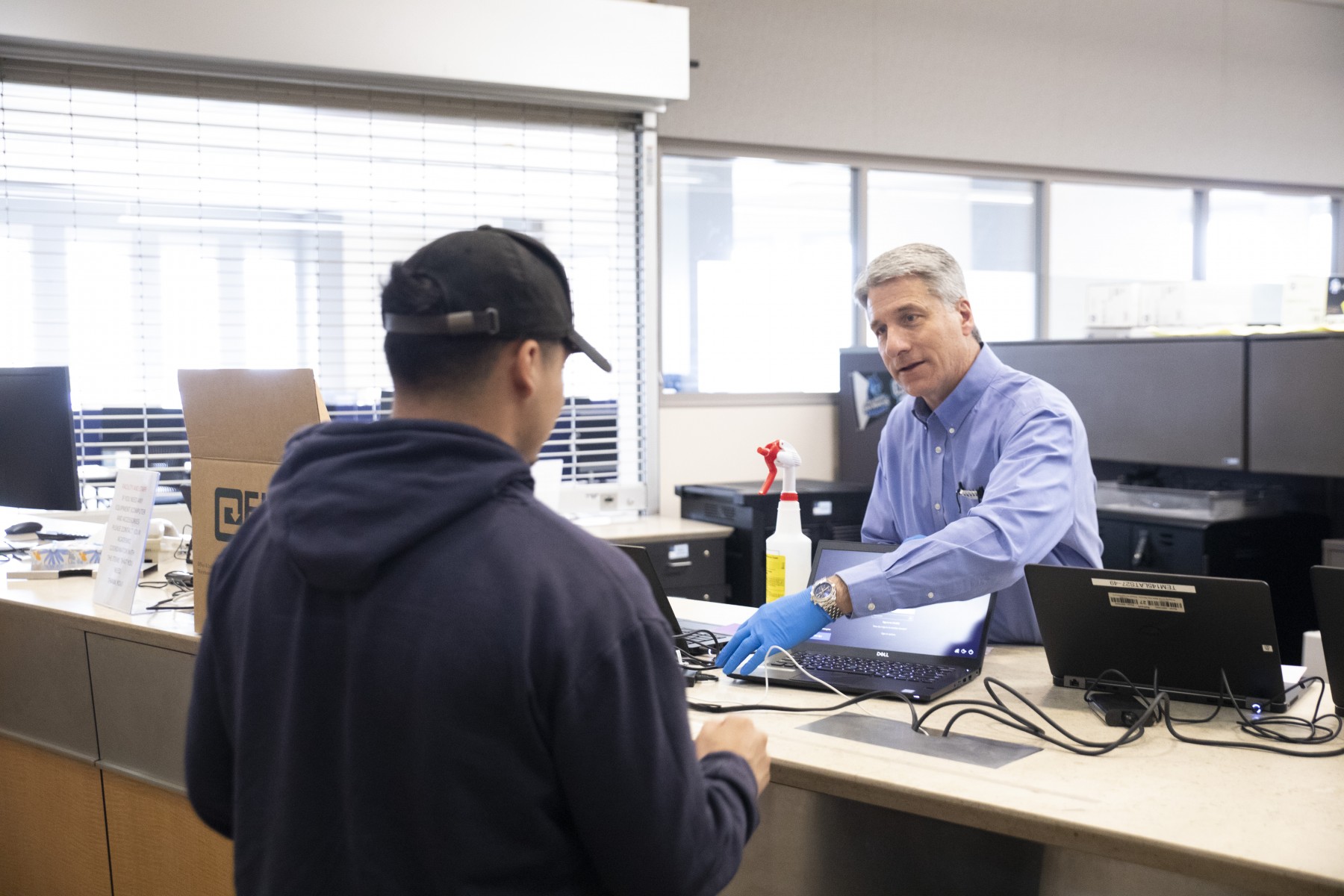 Kevin Morningstar, dean of IITS, helps a student with a laptop in Kellogg Library. Photo by Andrew Reed