Immersing in an Ancient Language and Culture 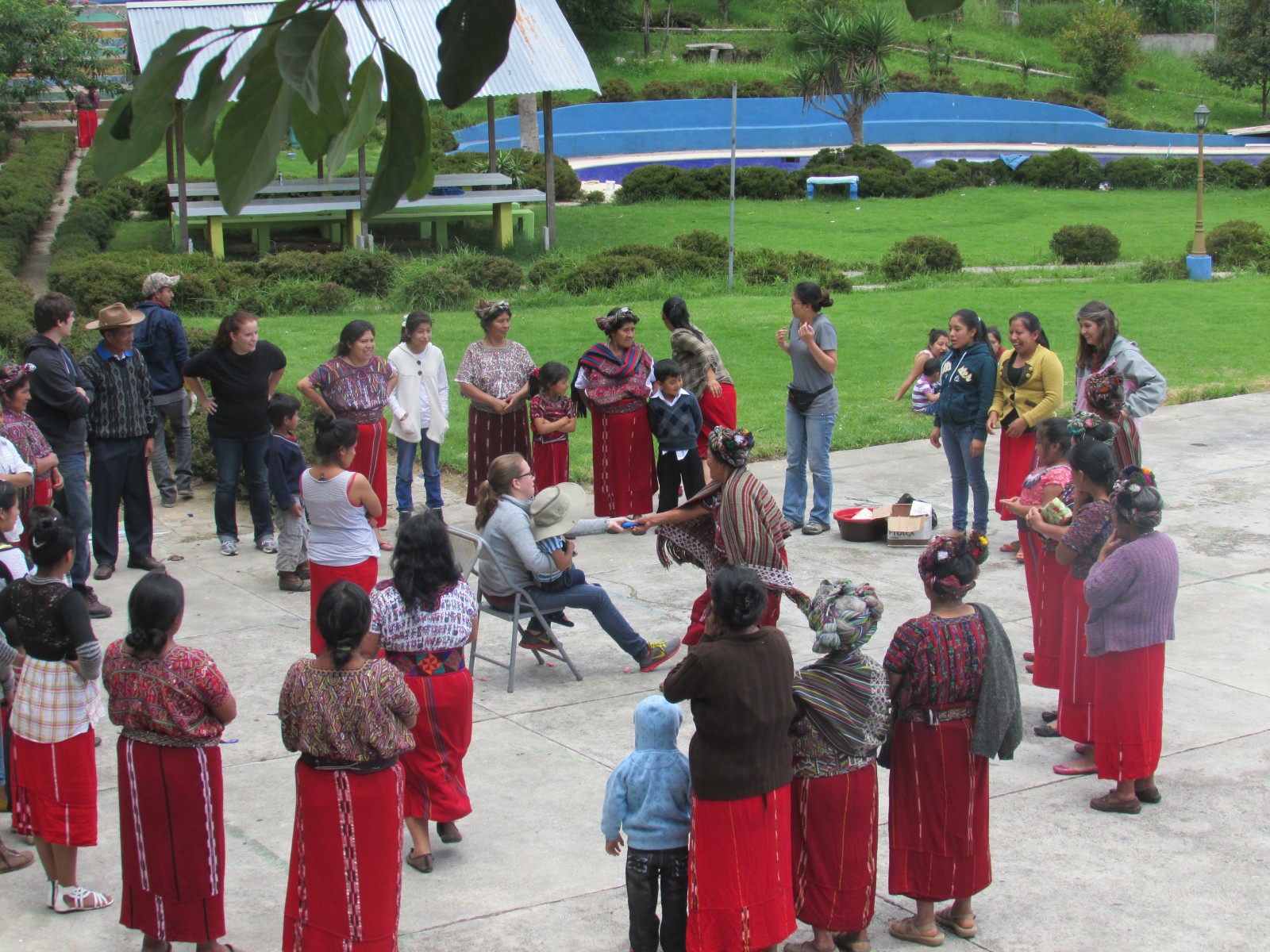 Playing a game
Malory is participating in a contest called "The King wants…" in which the caller names an item (in this case a baby, a hat, a flip phone) and the women, who are divided into two teams, race to supply their team member in the center of the circle with the items wanted). Malory's team won!

Nebaj, El Quiche, Guatemala, a bustling city situated high in the Cuchamatanes mountains, is home to the Ixhil (pronounced “ee sheel”) Mayan people. Caught between modernity and tradition, the Ixhil have called the region home for thousands of years, tenaciously resisting Spanish acculturalization and holding on to their traditions and language despite the tragic and violent Guatemalan civil war.

This summer under the direction of CSUSM faculty researchers Jule Gómez de García and Michael Hughes, a group of students spent two weeks immersed in the indigenous community, performing linguistic fieldwork and learning about traditional weaving, handicrafts, farming techniques and the principles of medicinal healing. Gómez de García and Hughes have been traveling semi-annually with their research team to Nebaj for nearly 15 years to conduct various language documentation projects and their Ixhil collaborators, the Grupo de Mujeres y Hombres por la Paz, were eager to welcome their students to Nebaj.

“We wanted the students to get to know, understand and care about this very special group of people who have become an important part of our lives,” said Gómez de García. “It was an emotional time for us—we wanted them to love each other…and they did! The students realized that they weren’t there to help the Ixhil people, but to know them and to experience important aspects of their lives.”

Sorting corn
Students help sort the corn they will use for various food and drink items, including their afternoon lunch on the first day of the weaving project.
Preparing tamales
Donna and Alicia help the women prepare the corn tamales for their farewell party.

During their time in Nebaj, the students visited Ixhil homes where they studied and practiced the Spanish and Ixhil languages and learned to cook traditional foods. Students Dorothy Allen-Tarver and Donna Yee recalled making a cornmeal drink under the guidance of a local woman named Xhiv and her mother, also named Xhiv.

“Their daily lives do not include the amenities that we take for granted, but they strive and innovate to make things work,” Donna said. “I loved learning to cook even though the smoke from the fire pit stove filled the tiny, dirt floor kitchen.” 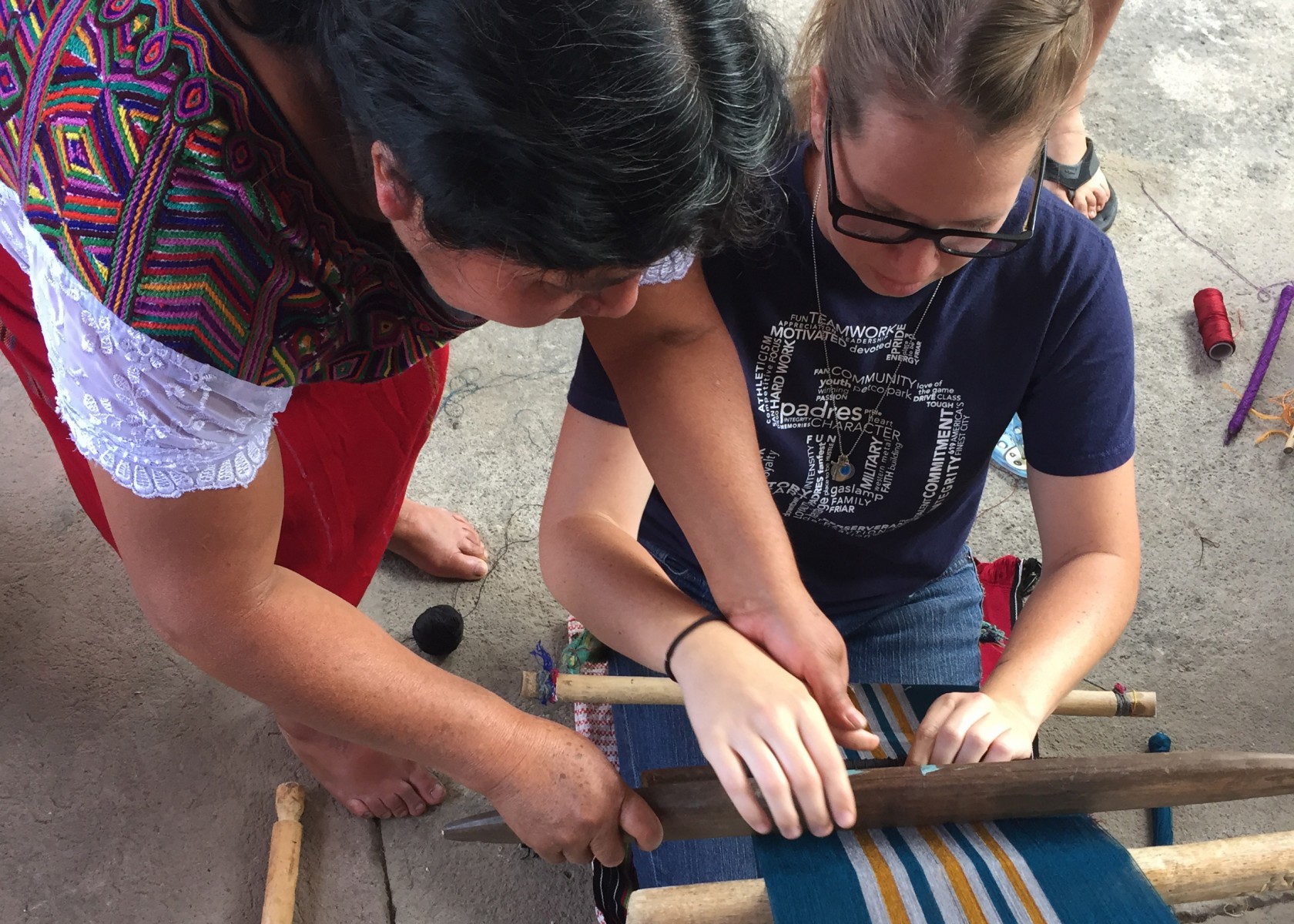 Weaving lessons
Malory is working with her weaving teacher on setting up the threads for her weaving.

Each student was mentored by a master weaver who led them in the ancient practice of backstrap weaving, so-called because one end of the loom is attached to a post or tree via a rope, and the other is attached to the weaver’s body through a strap that wraps around the back. Over the centuries, the backstrap weaving technique has remained unchanged and is one of the ways in which Mayan women have preserved their identity and culture.

The weaving classes began as a group project and then each student spent several hours weaving in their teachers’ homes, while sharing traditional foods and getting to know their families. Not only did the many hours of kneeling attached to the loom yield for each student his or her own creation representing a very special cross-cultural collaboration, but it allowed them to practice and learn Ixhil and to observe and interact with an indigenous community that, for centuries, was largely isolated from the rest of Guatemala and the world.

The study abroad experience satisfied course requirements for Modern Language Studies 350: World Languages and Their Speakers, an upper-division social science requirement that focuses on language policy, prestige languages versus minority languages and the comparative grammatical structures of languages found around the world.

“In Guatemala, Spanish is the majority language but only about 50 percent of the people speak Spanish as a mother tongue,” said Hughes. “The rest speak one of 21 different Mayan languages, so it’s an interesting place to look at language policy as well as to observe how the culture has responded to the massive social disruption of the civil war.” 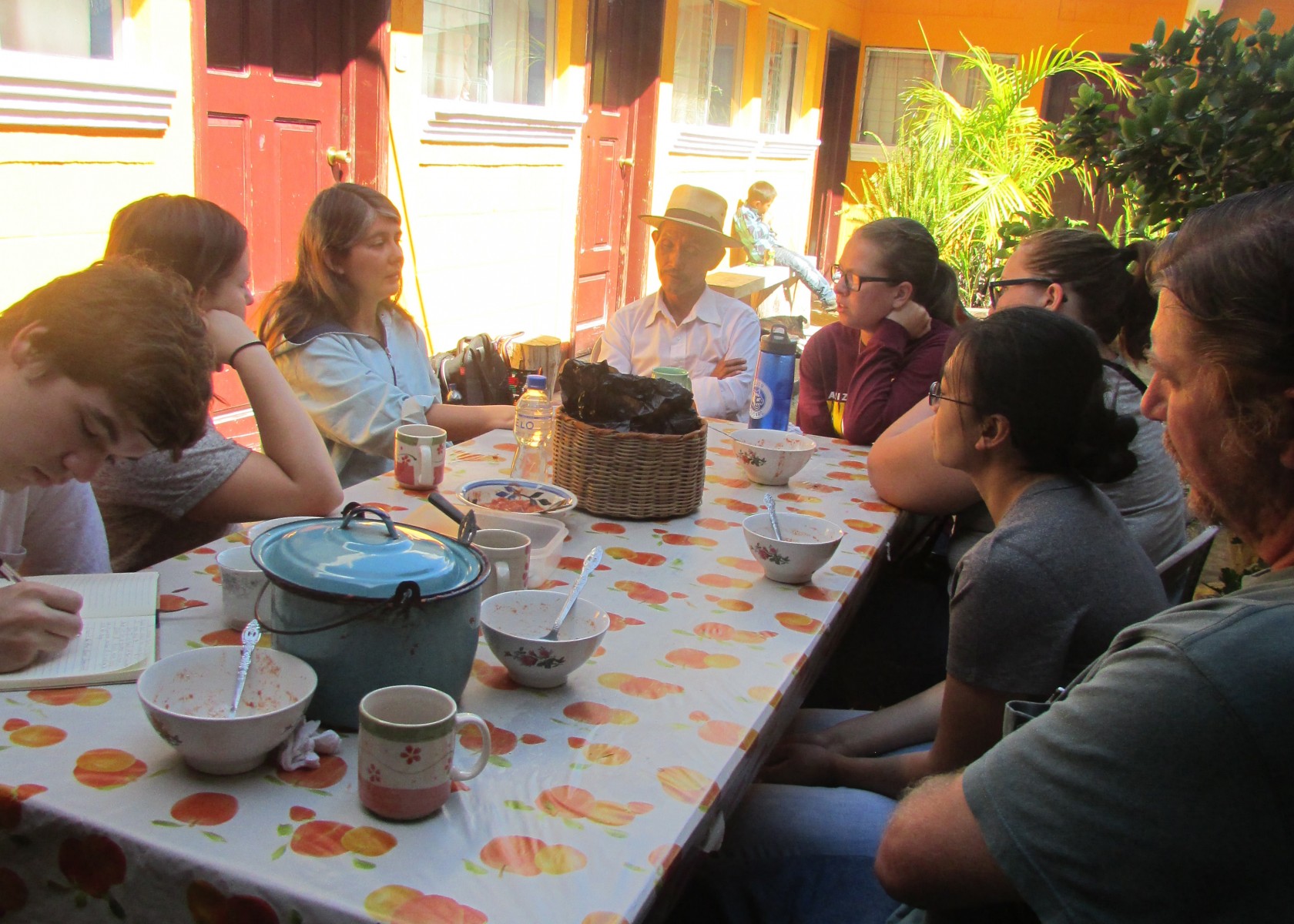 The trip also included for the students daily hikes and excursions to Colonial Antigua, Chichicastenango, local villages and Finca La Perla, a coffee plantation that played an important role in reintegrating civil war refugees into the area by providing work for them and by helping to reconstruct entire villages. The students visited La Perla with Miguel Guzaro Raymundo, a former leader of the Communities of Population in Resistance during the war, the current director of the Nebaj Association of Victims. Raymundo described what life in the mountains was like for the refuges forced to flee their homes and the measures taken to protect the Ixhil people during the war.

“For me, it was one of the most eye opening experiences I have ever had,” said student Alicia Eckert. “The thing I am most grateful for is all of the wonderful people we met, and for them to be so excited to share their beautiful culture with us! It was definitely a once in a lifetime experience!”

Immersing in an Ancient Language and Culture