Business Student Thrives on and off Golf Course 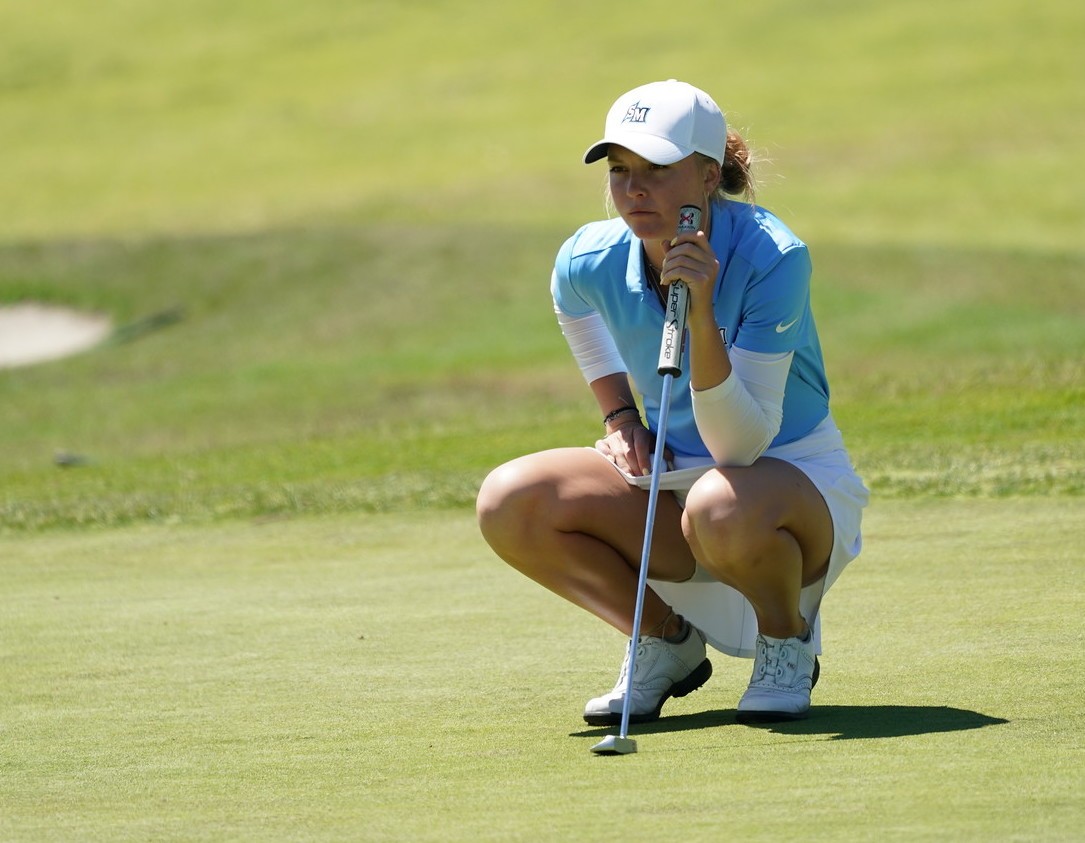 Most people stay away from the beach when it rains.

But on this particular cold and rainy day seven years ago, Jaime Jacob and her dad made their way down to Beacon’s Beach in Leucadia to hit some sand wedges near the shore. Jacob was a freshman at La Costa Canyon High School at the time, going between swimming and golfing in a family loaded with athletic talent.

This was something Jacob and her dad did fairly often, but this day would prove to be different when they were approached by a man who introduced himself and offered her a few tips on her swing.

He spoke as if he knew a lot about golf, so Jacob listened and put some of his advice to memory. When she got home, she looked his name up. Her jaw dropped when she realized she just spent time getting free advice from legendary swing coach Peter Beames, who worked extensively with Hall of Fame golfer Gary Player, among many others.

“I didn’t know who he was when we were talking to him,” said Jacob, a Cal State San Marcos junior. “He just seemed like another crazy Leucadian that liked to go to the beach on rainy days like my dad and I. I realized who he was that night, and having him tell me that I was on the right track meant so much. It was a small token of validation that I needed to be confident in moving forward with the game.”

The Cougars are coming off their second consecutive California Collegiate Athletic Association team championship, a title they won by 21 strokes in the recent three-day, 54-hole event at Morgan Run Club & Resort. Jacob herself is coming off a second straight CCAA Golfer of the Year Award as she captured the individual title with a two-stroke win over teammate Claire Hogle.

The Cougars are breaking new ground as a golf team not only because Jacob is one of the country’s best, but also because she is a leader in every sense of the responsibility.

“Jaime is a great leader and is looked up to by everyone on the team,” said Cougars assistant coach Jennifer Johnson, a former touring pro. “I never have to worry about her making practice and her schoolwork a priority. Golf is an individual sport, but she cares so much about this team and sets such a good example with her attitude, work ethic and drive.”

Jacob takes the role of team leader seriously in a sport that rewards individual performances. While she continues to drive toward a career in professional golf – she’ll attempt to turn pro via qualifying school upon graduation – she attributes much of her success to the effort and closeness of her teammates and coaching staff.

“A good portion of my individual success comes from my team; their motivation pushes me to be better on and off the course,” Jacob said. “We are a very close team. We spend a lot of hours together at practice, so we don’t spend much time together physically outside of practice. But our group Snapchat keeps us tight when we're apart.”

Jacob comes from a family oozing with athletic talent. Her father and grandfather both played Division I college football, her uncle played seven years of minor league baseball and she has two cousins who played field hockey and tennis in the Pac-12.

Growing up, her parents imparted on her the importance of being active outside of the classroom. It certainly wasn’t at the expense of grades as the global business management major was a 4.0 student in high school and earned CoSIDA All-Academic third-team honors as a sophomore.

Her older sister was a competitive swimmer, but Jacob’s career in the pool didn’t last long.

“I was actually a terrible swimmer, and my sister was the one that was so successful in the pool,” said Jacob, who now owns nine individual tournament collegiate titles. “I hated being in her shadow, not to mention having to jump into a cold pool to look at a black line on the bottom of it for hours. I tried other sports but began to get discouraged with finding one that I really enjoyed.

“My parents made it clear that I had to choose something to do outside of school, so I chose golf after all else failed. Luckily it stuck.”

Luckily for the Cougar, too. She had several Division I offers, but none afforded the opportunity to golf in a climate where one is able to hit the links virtually 365 days a year. Her commitment three years ago and subsequent success has paid dividends for a program on the verge of making history.

“Jaime's play and performance the past two seasons has definitely helped put CSUSM on the map for Division II golf,” Johnson said. “Recruits see her winning and the scores that she shoots, and they want to come be a part of this team and San Marcos. Also, within our current team, Jaime and all of the ladies have pushed each other to be better. As a coach, having a super competitive team is an ideal situation. I can just see how bad they all want to win and how everyone wants the team to win.”

Jacob’s competitive spirit didn’t begin that rainy day at Beacon’s, but that fateful meeting with one of golf’s greatest swing coaches did drive her. Her parents developed in her a healthy respect for competition, and that seems to have served her future on a tee.

“As proud as a parent can be,” her father Joe Jacob said. “Both my girls work so hard off the course. We don’t feel we will ever have to worry about them in life. They can handle it. That is most important. Yes, we are proud of her golf success, as any parent would be, but we are more proud of the person she has become.”

Business Student Thrives on and off Golf Course