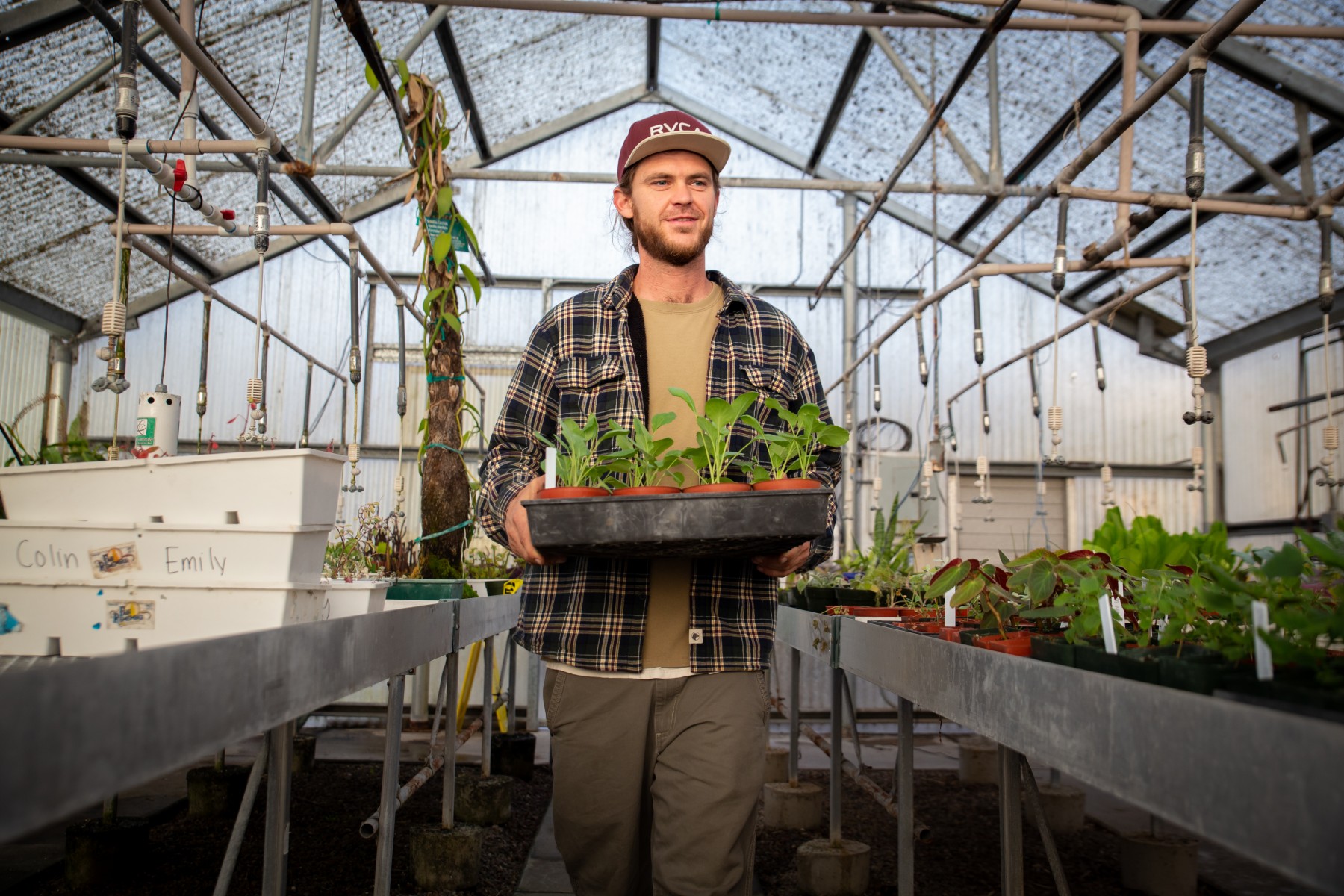 Jameson Meyst
Cal State San Marcos student Jameson Meyst has turned his life around since serving a jail sentence for drunken driving. Jameson, who hopes to establish himself in the farm-to-table industry, has an internship with MiraCosta College’s Horticulture Department and Nursery. Photo by Christine Vaughan

As Jameson Meyst sat in jail, facing charges of drunken driving, his mind focused on the other people involved in the three-car accident.

“I thought everyone had died,” Jameson said.

While others sustained injuries, Jameson was relieved to learn that everyone survived. He had two previous DUIs on his record, but it wasn’t until the accident that he received a much-needed wake-up call to stop drinking.

More than two years after the accident, Jameson calls that first night in jail “the moment everything was going to change.”

Jameson spent six months in jail for that third DUI. He considers himself fortunate to have avoided a longer sentence, and he has maintained his vow to stop drinking since his release in April 2017.

Taking that first step helped Jameson renew his focus on establishing a career in the farm-to-table food industry, something he had been working toward before his incarceration. And higher education is playing a critical role in achieving that goal. It started with Jameson earning his associate degree at MiraCosta College and has continued since he transferred to Cal State San Marcos for the fall 2018 semester.

“I wasn’t facing the issues that I needed to face to make the next step in my life,” said Jameson, who is double majoring in environmental studies and indigenous anthropology with a minor in business administration.

Jameson grew up in Valley Center, a small rural community about 14 miles east of CSUSM, and took courses at Palomar College after high school. He drank moderately in his early 20s, but said his alcohol consumption started to significantly increase when he was about 23. He received his first DUI in 2012 and another about three years later before the one in 2016 that landed him in jail.

“I was drinking to hide,” he said. “I self-sabotaged and caused myself to fail. Now, I’m no longer afraid of success.”

Jameson credits Martín Leyva for helping him overcome that fear. Leyva could relate to Jameson’s struggles, having overcome his own battles with alcohol, drugs and incarceration to earn his master’s in sociological practice from CSUSM last May.

Now a lecturer in CSUSM’s sociology department, Leyva helped launch the Transitions Collective at both MiraCosta and CSUSM to support formerly incarcerated students and their allies.

“The only reason I’m here is because of Martín Leyva,” Jameson said. “If I didn’t have the Transitions program at MiraCosta as an option, I wouldn’t have had the people in that program to support me and give me the motivation to continue my education.

“Not only did Martín advocate Transitions in every way, he did it himself. He’s a prime example of turning everything around.”

Jameson said his attitude toward higher education did a 180-degree turn thanks to Leyva and other leaders of the Transitions Collective, including CSUSM sociology professors Christopher Bickel and Xuan Santos. Not only did the Transitions Collective provide emotional support and a college success skills course, it also offered important practical benefits, from food cards for the school cafeteria to free student ID cards.

“Jameson never wavered. From day one, he kept his word,” Leyva said. “I have many folks who come to the program, and most are motivated. But then you meet those few who you just know are in it for the betterment of self and motivated to make a difference. Jameson is motivated, and I know he is going to do good things. He is humble and caring, patient and kind. That, coupled with his personal experience and education, is what leaders are all about.”

Being part of the Transitions Collective helped Jameson build his confidence while simultaneously advancing his professional goals. 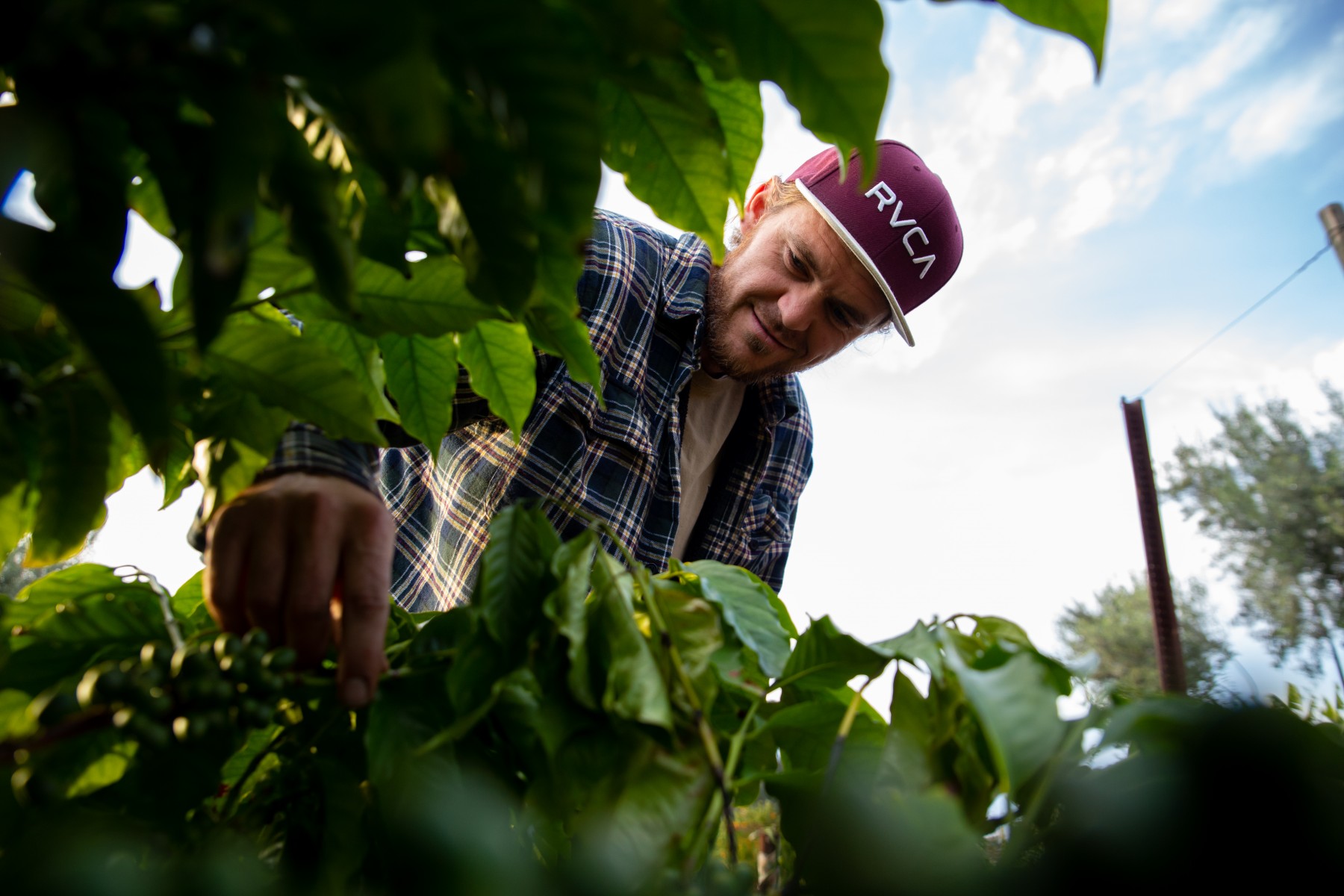 Jameson Meyst
Cal State San Marcos student Jameson Meyst has turned his life around since serving a jail sentence for drunken driving. Jameson, who hopes to establish himself in the farm-to-table industry, has an internship with MiraCosta College’s Horticulture Department and Nursery. Photo by Christine Vaughan

Jameson’s interest in the farm-to-table industry and growing his own food began when he was about 19. His family had citrus and avocado groves on their property in Valley Center, but Jameson didn’t play an active role in tending to them.

That changed after his father was diagnosed with cancer in 2008.

Squamous cell carcinoma most frequently occurs in areas exposed to the sun, but Jameson’s father had it in his throat. Though doctors didn’t directly link his father’s cancer to food and his father recovered, the experience made Jameson think more about what people eat and how it impacts them.

In November, Jameson was among 10 finalists for LegalZoom’s inaugural Entrepreneurial Scholarship Grant. Finalists were selected from hundreds of applications based on ideas that showed “exceptional business viability, scalability, uniqueness and a spirit of community service.” Jameson pitched Farmers Wellness with a plan to raise high-quality produce and supply it to locals and area businesses.

Although Jameson didn’t win the competition, the experience proved invaluable as he looks to build his business. He was recently awarded a scholarship to attend the 20th Annual Virginia Biological Farming Conference in Richmond, Va., from Jan. 11-13, providing him more opportunities to network and learn about the business while also receiving his Food and Safety Modernization Act certification for post-harvest handling of crops.

Jameson is continuing to grow food on his family’s property in Valley Center, where he lives with his mother and younger brother. As a condition of his probation, Jameson isn’t allowed to drive. Instead, he walks each day to catch the bus to CSUSM. From the time he leaves his house to the time he arrives at campus is 90 minutes each way. It’s an additional 30 minutes each way when he goes to MiraCosta for an internship.

But it’s worth it. Jameson can remember a time when he looked at CSUSM with disdain. Those days are long past.

“It’s been more amazing here than I ever thought,” he said. “I used to hate this place. Probably because it represented what I didn’t do but knew I could have.

“For a lot of people, it’s just standard issue going to a university. For me, it’s almost like making it into heaven.”