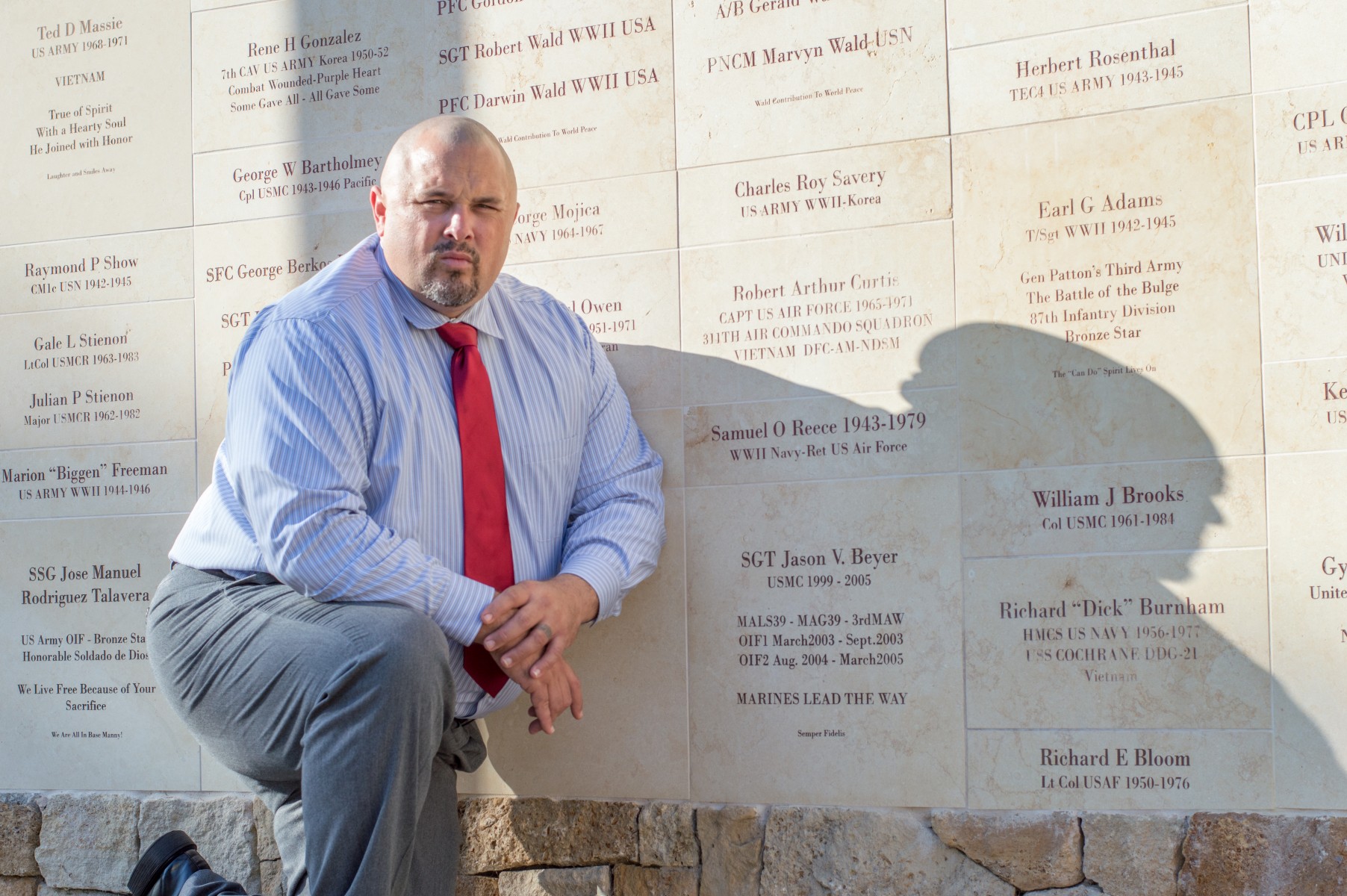 Jason Beyer is a CSUSM business student and Marine veteran who's leading an initiative to expand the memorial wall at Helen Bougher Memorial Park in San Marcos. Photo by Angelica Pena

When he and his wife bought their first home in 2011, Jason Beyer was pleased to learn that just up the street, on Woodland Parkway in San Marcos, was located a park whose main feature is a memorial wall for military veterans.

Beyer is a military veteran himself, a Marine who served at the outset of the war in Iraq, and he enjoyed walking to Helen Bougher Memorial Park with his children and showing them the names on the wall, teaching them about the values that the military holds dear. About four years later, Beyer even purchased one of the travertine tiles and added his name to the wall.

So he was dismayed to discover that the tile he bought was the last one available to the public. The wall had run out of space.

“For the past several years, it’s been like, ‘Well, what should we do?’ ” Beyer said. “There’s not really a plan in place for veterans who live in San Marcos. One of them I know has cancer and he’s a little bit older. He wants to be able to have something memorialized in the park before his time is up.”

Facing what he views as a ticking clock for some fellow veterans, Beyer is attacking the problem with energy and urgency. Now a business management student who’s on track to graduate from Cal State San Marcos in spring 2021, he has formed a group called the San Marcos Veterans Memorial Initiative (SMVMI) that includes about a dozen members from both campus and the surrounding community. Their goal is to present a plan for an expansion of the wall to the city of San Marcos and to raise money to make the project a reality.

On Monday, Beyer was the guest speaker for the San Marcos Veterans Day ceremony at Helen Bougher Memorial Park, where he talked about this year’s theme of “Providing a Lifetime of Service” and touched on his efforts to enlarge the All Veterans Memorial.

“Jason’s passion and energy are great, and arriving at a very good time,” said Greg Rassatt, a retired Army colonel who invited Beyer to speak and who was part of the original committee that helped bring the memorial wall into existence in 2009. “He is keeping alive the effort to add more tiles, to include bringing in fresh ideas from CSUSM students.”

Last spring, after he had convened the SMVMI and solicited initial feedback on their project from the San Marcos city manager and parks and recreation director, Beyer came up with the idea of partnering with art students at CSUSM. He contacted Kristin Moss, an associate professor of visual arts, who was receptive to his overtures.

This semester, Moss decided to use one of her most popular classes – Public Expression in the Arts, an upper-division GE course for art and non-art majors alike – to help Beyer tackle his dilemma. She divided the class of 51 students into seven groups, each of which worked over a period of several weeks to create a design for an expansion or reimagining of the memorial wall, including the building of a scale model.

“My students design a lot of hypothetical public artworks, so it was nice to have a real-world opportunity with real design parameters,” Moss said. “And I think that some of the ideas that they came up with could be useful to the veterans initiative as it moves forward with the city.

“An opportunity like this really strengthens the connections between the university and the local community. I love to do community-engaged projects, but a lot of times I’m working with someone I’ve sought out or someone I know, and this time Jason really sought us out.”

Jason Beyer collaborated with visual arts professor Kristin Moss, whose students created designs for an expansion of the veterans memorial wall in San Marcos.
CSUSM students last month presented their designs to a group formed by Beyer called the San Marcos Veterans Memorial Initiative.
The students valued the opportunity to work on a real-world design project, Moss said.
One of the student designs includes pillars for each branch of the military.

The student groups presented their designs last month to the SMVMI, which in turn plans to present them to city officials later this year or early next year. After initially envisioning something of a design competition among the students, Beyer was so wowed by their conceptions that he hopes to incorporate bits and pieces from all of the designs.

“I was impressed with how much detail they got,” Beyer said. “They went to the park at night and brought up lighting issues. They went to Home Depot and got pricing and gave examples of why LED would illuminate more. They came up with ideas for fundraising and where to get certain material. They really went all out.”

To manage the fundraising, Beyer and his group are working with Friends of San Marcos Parks and Recreation, a nonprofit that’s supported by city staff in trying to enhance the city’s parks and recreation programs and facilities. Beyer envisions two rounds of fundraising, the first to cover the cost of an architectural blueprint and the second for the construction itself. He anticipates the project taking about three years from start to finish.

“Jason is really the first one to try to physically do something about the wall,” said Buck Martin, San Marcos parks and recreation director. “Nobody has stepped up and said, ‘OK, here’s a check or here’s what we’re going to do,’ and the city hasn’t had the resources to expand the wall. It’s quite an undertaking that Jason is trying to take on. We all want him to be successful.”

Besides wanting to expand the wall for elderly or sick veterans who might not have much time left, Beyer also has intensely personal motivations. Soon after transferring from Palomar College to CSUSM in fall 2015, he was diagnosed with testicular cancer. He began chemotherapy the following spring and eventually took two semesters off, both to fight the cancer and deal with lingering mental health struggles from his days in the military. That brush with mortality – he’s about a year away from being declared cancer-free – reminded him that life is precious and service to others is essential.

“I want my kids to remember me for something good,” Beyer said. “Rather than going to a cemetery where it’s usually somber, they can go to that park and remember me and remember what I tried to help do for other veterans.”

Perhaps Beyer’s chief inspiration for the wall project, however, is a harrowing experience he had in a combat zone, though strangely it came after he left the military. Following two deployments to Iraq, where he served as an aviation electrician, Beyer retired from the Marines and then got a job with a defense contractor in Afghanistan, doing satellite communications.

Only three months into the gig, on Labor Day of 2010, he was working with three other veterans when they received word that the area was under attack and to retreat inside of a bunker for safety. But a mortar shell landed just outside the bunker, and the explosion of shrapnel killed all three of his co-workers. It somehow missed Beyer.

He stayed on the job in Afghanistan for three more years, grappling all the while with survivor’s guilt.

“If it would have landed just a few feet to the south, it would have killed me, too,” he said. “I just kind of put blinders on for the rest of the time I was there.

“I’m trying to do what I can and experience as much as I can while I’m here on earth, because I got spared for whatever reason, and going to the wall would help keep their memory alive. It would be a good experience to see that wall complete. I’d like to be able to say I was a part of that.” 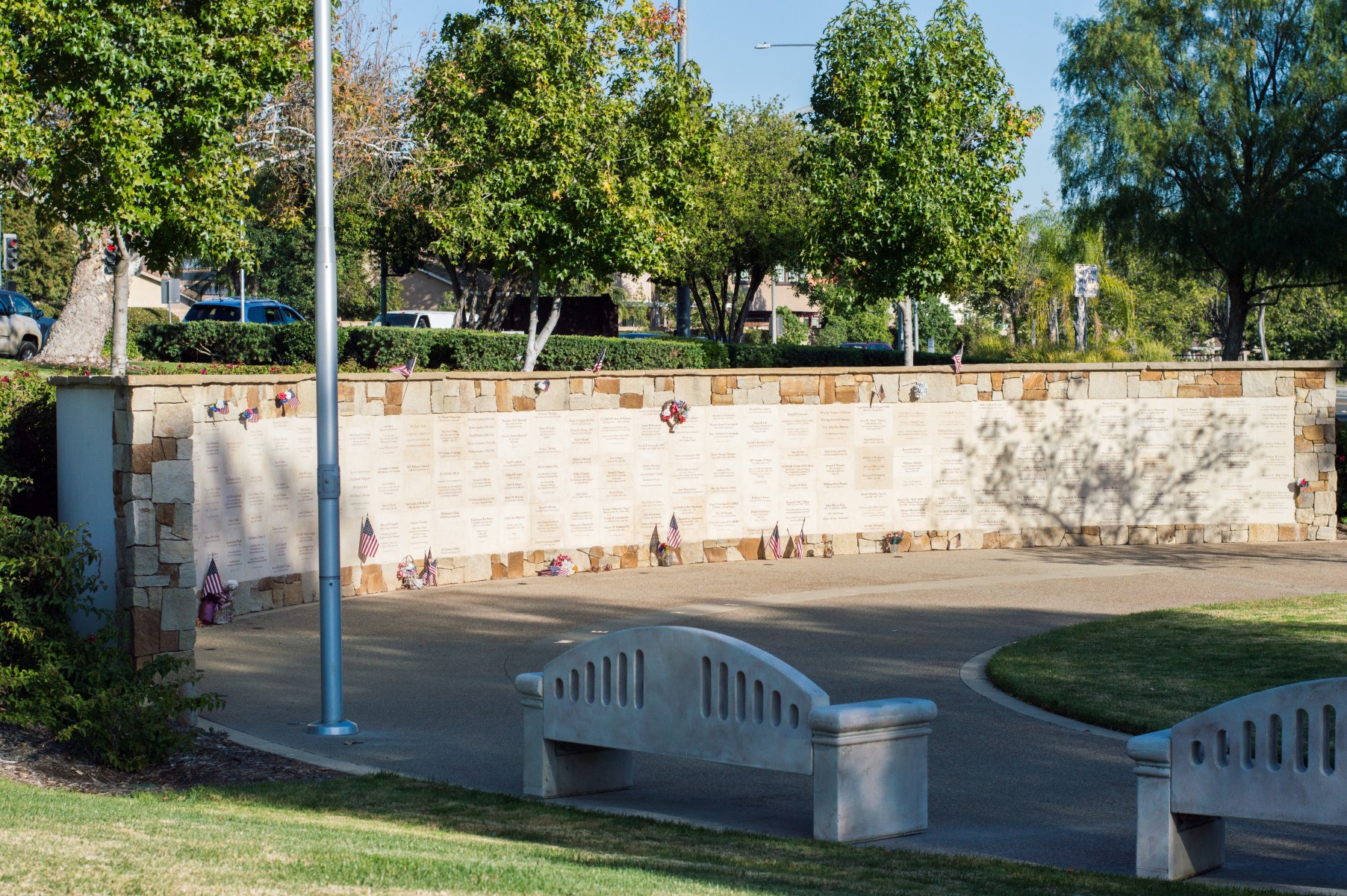 The All Veterans Memorial in San Marcos was christened in 2009 but ran out of room for more names several years ago. Photo by Angelica Pena