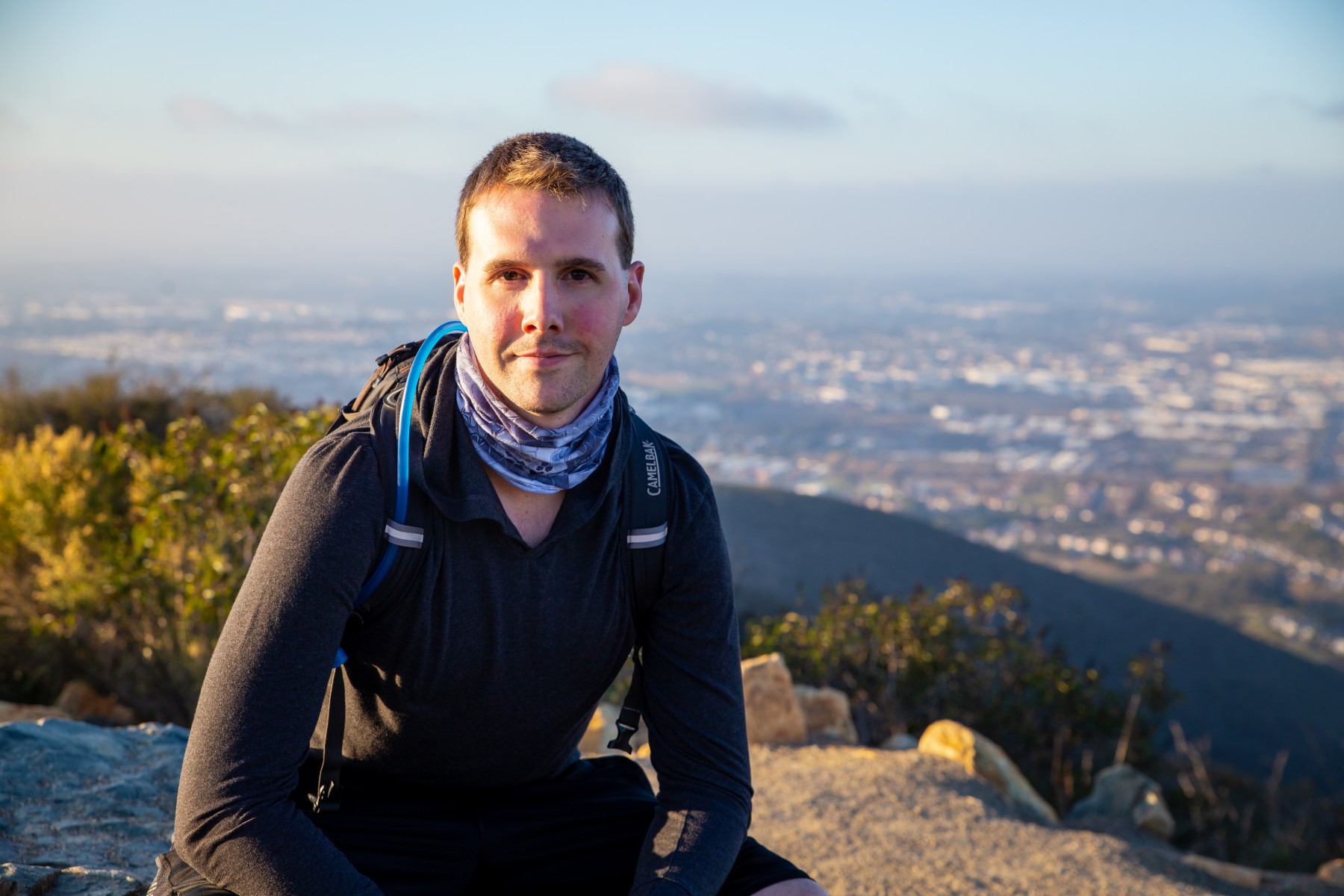 It certainly wasn’t an ideal schedule for a student taking a full class load during his first semester at a university.

Every Wednesday, for about five months starting last January, Jeffrey Foertsch would arise at 4 a.m. and take a bus from his Oceanside condominium to the nearest Sprinter station, where he would then catch a train to Cal State San Marcos. He would attend a couple of classes toward his major in computer science and information systems.

Then, around lunch time, his day would really begin.

Foertsch would leave campus and walk over to Discovery Lake, the starting point of a long, steep climb up to Double Peak. That might be enough of a workout for most people. But Foertsch would hike on and around the ridgeline trails for the rest of the afternoon and into the evening, covering at least 16 miles and as many as 26.

“I was always by myself, wireless headphones in, just trucking,” said Foertsch, who tended to listen to podcasts or electronic music. “That was prime hiking for me. I went through a couple good pairs of shoes in that period.”

Foertsch knew about hard workouts from his days in the Marines, but there was a method to this particular madness. Around this time last year, he signed up for the Trailblaze Challenge, a one-day, 28-mile hike through the Big Bear Lake portion of the Pacific Crest Trail to raise money for the San Diego chapter of the Make-A-Wish Foundation.

In order to participate, Foertsch had to achieve a personal fundraising goal – his was $2,500 – that would contribute to a collective fundraising goal of $480,000 (ultimately, the 167 hikers in the challenge raised a total of $481,668). While he beat the bushes for donations, of course, he also had to hit the trails.

But not only was he taking 17 credits during his first semester after transferring from Palomar College, Foertsch, 32, also was limited by the work demands of his wife, Samantha, a weekend site supervisor for Imaging Healthcare Specialists, and by his duties as a father to Eliza, then 5.

“It was one brutal hike a week, then a little bit of running,” he said. “That’s all I had time for.”

The Trailblaze Challenge is split into two sessions, and Foertsch registered for the second one, which took place on June 2. He and his family drove north to Big Bear Lake the previous day, with the hikers gathering for a carbo-loading pasta dinner on the night before. When he awoke well before dawn for the event, the door of his hotel room was decorated with streamers and and pictures drawn by the Make-A-Wish kids – a message of thanks for his fundraising efforts.

It served as a reminder to Foertsch about why he was doing it.

“The fact that you’re helping kids is a big motivator,” he said. “If my daughter had cancer, I would want her to have a wish.”

Feeling spry, Foertsch ran the first 12 miles of the challenge before slowing down to a nice, steady pace. With about six miles left, however, the muscles in his legs began locking up, and he was forced essentially to limp his way to the finish, where he was greeted by his wife and daughter. He fell just short of his target of eight hours.

“It was brutal. I was in agony,” Foertsch said. “I was hobbling down the mountain, and Eliza was like, ‘Yay, Daddy, you did it!’ Then some people helped carry me over to a place to sit down and hand me a pizza.”

Foertsch developed his interest in hiking in, of all places, Antarctica. After serving for 4 1/2 years in the Marines, mostly at Camp Pendleton, as an air traffic control radar technician, he exited in 2014, in part because of a shoulder injury. A short time later, he accepted a seven-month contract through the Navy to do some work at McMurdo Station, a research center on the tip of Ross Island in Antarctica.

Frustrated by gaining about 20 pounds after he left the military and feeling cooped up in the research station, he started climbing some of the nearby mountains, including Mount Erebus, the southernmost active volcano on the planet. When he returned to California, he signed up for a hiking club on Facebook, through which he learned about the Trailblaze Challenge.

Foertsch hasn’t decided whether he will do the challenge again this year. Besides his studies – he's on track to graduate in December 2019 – he's also an intern working in analytics at the Veterans Center as part of the Veterans to Energy Careers (VTEC) program, which seeks to facilitate the transition of vets like Foertsch into STEM fields.

Whether he trailblazes or not this summer, though, Foertsch is proud of what he accomplished.

“When I was in the military, I never deployed, and I always felt kind of useless after I got hurt,” he said. “So I wanted to prove something to myself. I’ve always had these pie-in-the-sky dreams, and a lot of taking on the challenge was about proving to myself that I could do it.” 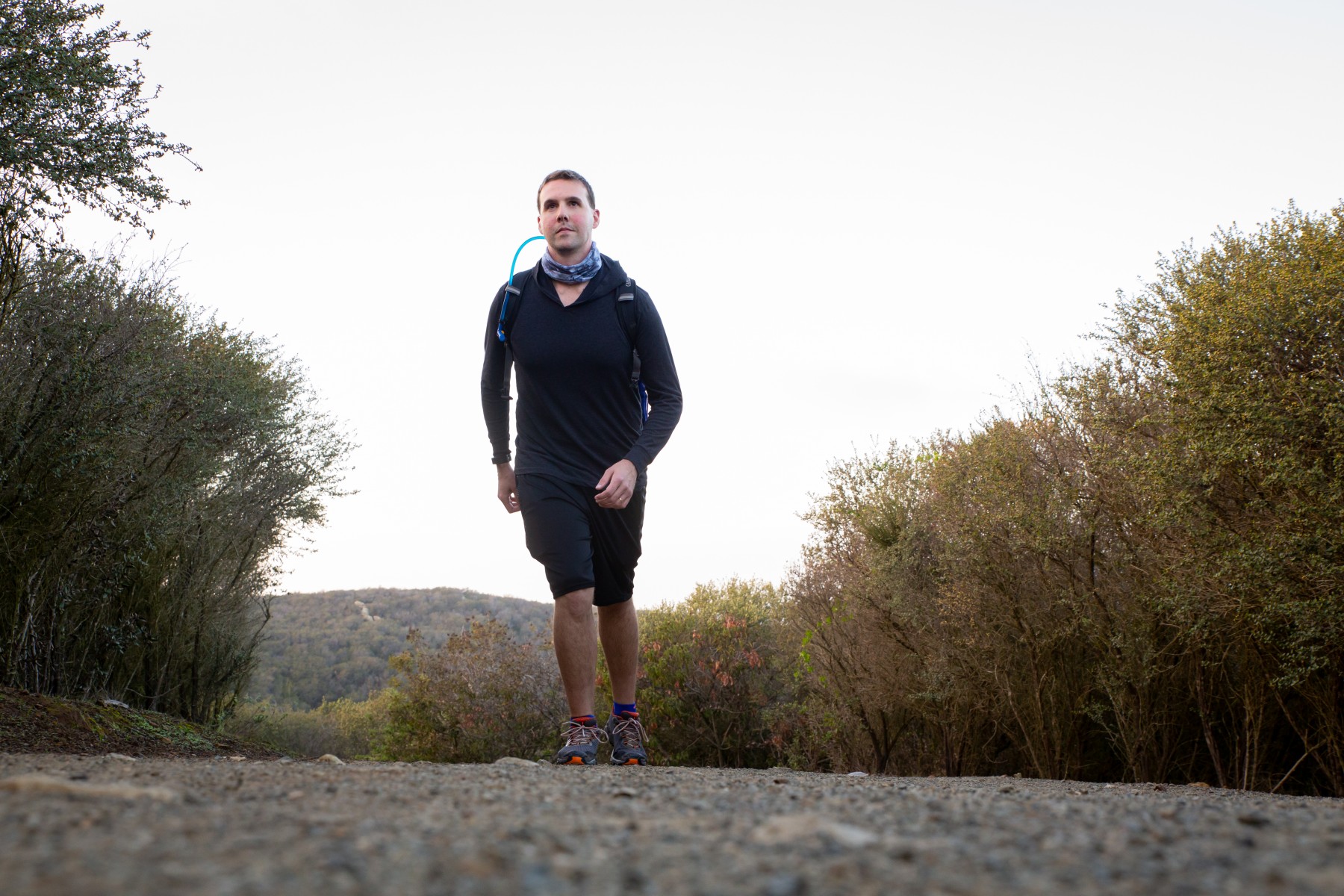 Jeff Foertsch
The student veteran is pictured on the trails near Double Peak, where he hiked in training for the Trailblaze Challenge. Photo by Christine Vaughan