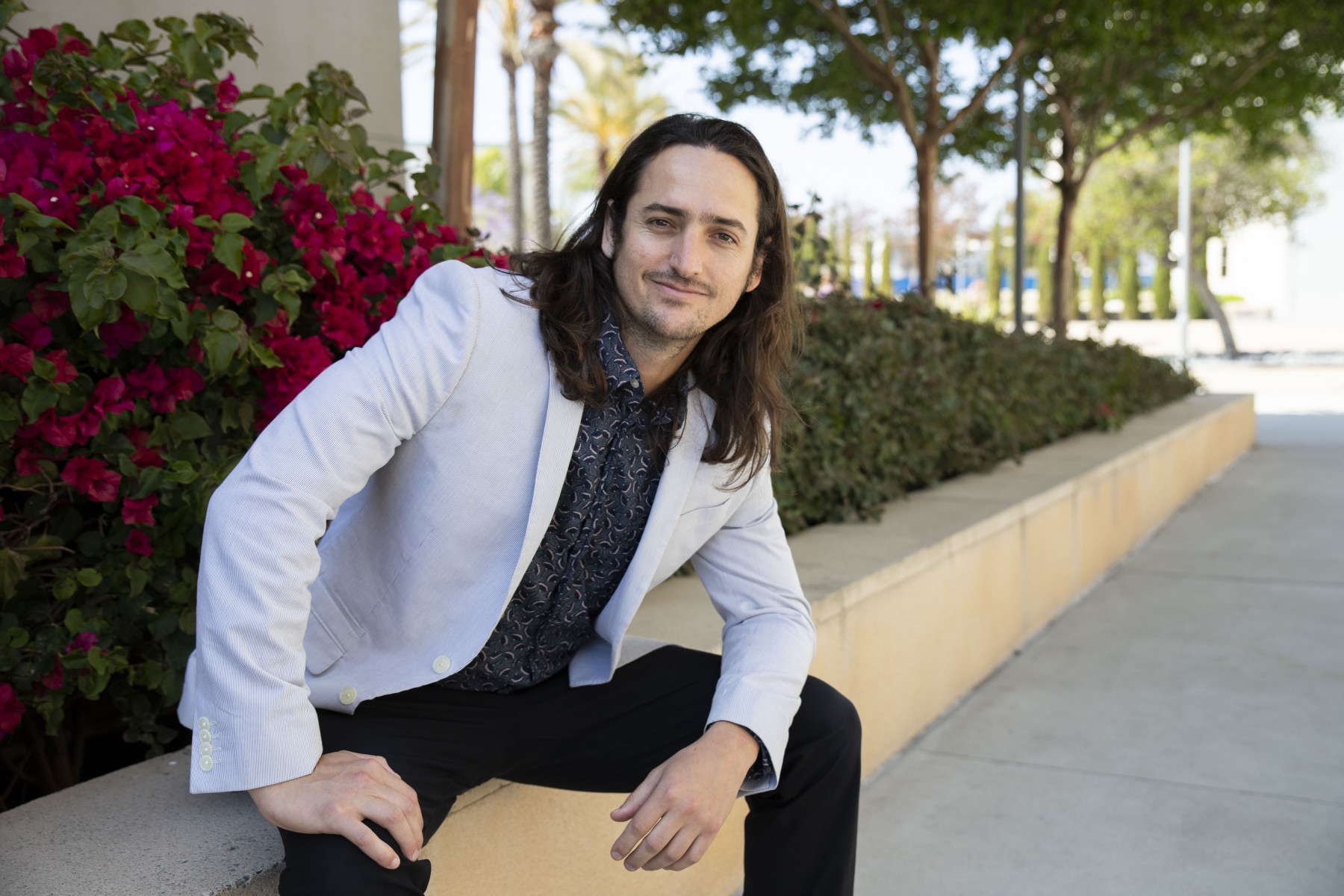 Jeff Jaureguy, a senior biological sciences major, has been selected to receive the 2019 Trustees' Award for Outstanding Achievement, the CSU's highest recognition of student accomplishment.

For Jaureguy, the third time truly was the charm. Motivated and laser-focused on his goals, he entered Cal State San Marcos as a transfer student in fall 2018 with a leg up and expecting to accomplish big things. He has done just that.

Jaureguy, a senior biological sciences major, was selected this week to receive the 2019 Trustees’ Award for Outstanding Achievement, the California State University’s highest recognition of student accomplishment. Jaureguy was named a Sycuan Band of the Kumeyaay Nation Scholar.

The CSU recognizes 23 students every year – one from each CSU campus – with the Trustees’ Award, which accompanies a donor-funded scholarship ranging from $6,000 to $12,000. The awardees will be publicly recognized during the CSU Board of Trustees meeting in Long Beach on Sept. 24

Students are selected for their exceptional efforts in the classroom and community. Awardees demonstrate superior academic performance, personal accomplishments, community service and financial need. Many have shown inspirational resolve along the path to college success.

“Winning the award means a lot,” said Jaureguy, 30. “It definitely shows that I’ve been putting in a lot of hard work and that it’s paying off. Because I’m a re-entry student, it was nice to come back to college and do it right and do it well, above and beyond expectations.”

To be sure, these are heady times for Jaureguy. The Trustees’ Award caps a recognition-filled 18-month period during which he was one of 20 students named to the Phi Theta Kappa All-USA Academic Team while at MiraCosta College, earned the Thomas M. Wahlund Memorial Scholarship last school year at CSUSM, and was awarded the Leonard and Jean Evers Scholarship for this year. He’s also a MARC (Maximizing Access to Research Careers) Scholar, a program through the Office for Training, Research and Education in the Sciences (OTRES) that helps prepare qualified undergraduate minority science students to enter and succeed in doctoral studies.

As if that weren’t enough, Jaureguy is coming off a summer in which he participated in the Summer Training Academy for Research Success (STARS) at UC San Diego, an intensive eight-week academy modeled on graduate school life. It included six-to-eight hours of faculty-led research per day, student development workshops, a GRE prep course and social activities.

Jaureguy is studying for the GRE now, and he plans to apply to Ph.D. programs in bioinformatics (which he describes as a blend of biology, computer science and math) and computational biology at UCSD, the University of Washington, the University of Pennsylvania and Oregon Health & Science University. In the process, he’s pursuing a grant from the National Science Foundation’s Graduate Research Fellowship Program that would offer a three-year annual stipend of $34,000 along with a $12,000 cost-of-education allowance for tuition and fees.

Jaureguy sometimes can’t help feeling like he already pulled a golden ticket, especially given the rocky start to his academic career. Born and raised in Oceanside, he nearly dropped out of high school as he struggled with anxiety, ADHD and depression. He gave Palomar College a try, but he fell in with the wrong crowd and completed only one semester. And things went from bad to worse when his parents divorced.

A new horizon opened for Jaureguy when his father, seeking a fresh start, moved to Dubai to teach at an American school in the city. As part of his contract, his children could visit for free until they were 24. The catch? You had to be a student, and Jaureguy wasn’t.

That prompted college attempt No. 2. He enrolled in MiraCosta’s massage training program, setting off a span of globe-trotting that changed his life. On Jaureguy’s first excursion to Dubai, his dad took him on a side trip to Egypt, which happened to coincide with the violent uprising of the Arab Spring in 2010.

“Nobody was there,” Jaureguy recalled. “We were at the pyramids, and there was like one drunk British guy on a camel, and that was it. But the whole trip was awesome. I knew I wanted to travel more.”

Before his second and final trip to Dubai on the dime of his father’s school, Jaureguy saved a bunch of money by working at a restaurant and doing construction jobs. He stayed with his dad for a couple of weeks, then embarked on a six-month journey of self-discovery in India and Thailand. 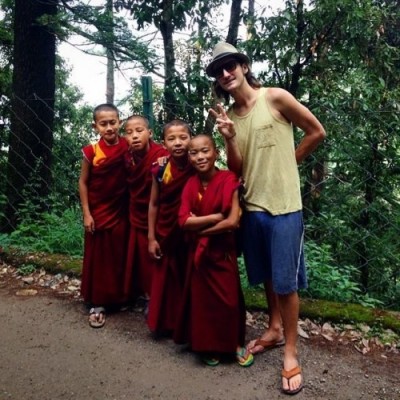 Jaureguy did massage training for a month in northern Thailand. He spent time at a Buddhist monastery, where he meditated for eight hours a day for two weeks. He volunteered for a nonprofit teaching English to Tibetan refugees and also at a veterinary clinic in India. He listened to the Dalai Lama speak about universal responsibility. He stopped by the Indian city of Rishikesh, famous as the place where the Beatles went to study transcendental meditation.

Fully bitten by the travel bug, Jaureguy returned to Asia two more times in the next couple of years, accompanied on these occasions by his future fiancée. One trip was to Nepal and back to India, the other was to Thailand, Indonesia, Cambodia and Laos.

“After I started, it became like, ‘This is all I want to do. I want to learn about cultures and people and have all these different experiences and eat different food,’ ” Jaureguy said.

Science finally entered Jaureguy’s radar in a roundabout way. Through a friend who’s a biologist, he and his fiancée got field jobs as independent contractors surveying for endangered species in California’s Central Valley. That ignited in him a desire to help bring about change in the world by protecting endangered species, sustaining biodiversity and studying climate change. But he realized that he would need a college degree first.

Thus began college attempt No. 3. This time, at age 25, Jaureguy was fully committed. Back at MiraCosta in 2015, he was accepted into the Bridges to the Future program, a partnership among CSUSM, MiraCosta and Palomar to prepare underrepresented students at community colleges for a seamless transition to four-year universities. During his three years at MiraCosta before transferring to CSUSM, Jaureguy performed continuous, invaluable research in the ecology lab of CSUSM biology professor George Vourlitis.

“I was immediately impressed by his interest and drive,” Vourlitis said. “He knew what he wanted to do and was eager to begin. I figured that some of this was due to his maturity, as he was older than the average transfer student, but he was also really eager to get involved in the lab, so much so that he stood out.”

Vourlitis taught Jaureguy the foundational skills of being a scientist, but a different CSUSM professor introduced him to the field that he plans to pursue as a career. Jaureguy heard Arun Sethuraman, another biology faculty member, deliver a lecture at MiraCosta and approached him afterward to express his interest in bioinformatics. Jaureguy decided that he would supplement his major in biology with a minor in mathematics to learn the coding and programming he’d require to master bioinformatics.

Now stationed in Sethuraman’s lab, Jaureguy is working on a study of the genomic landscape of Neanderthal ancestry in modern humans.

“I’m very proud of his achievements, and I am confident that he will continue to make CSUSM proud in his bright future,” Sethuraman said.

Jaureguy's immediate future includes his wedding in January and, he hopes by next fall, the start of a path toward becoming a professor himself.

“I think there’s a stigma around people who have ADHD or anxiety or depression,” he said. “So I like to talk about it to let people know that, no matter what your struggles are, you can overcome them. It’s important for people not to limit themselves.” 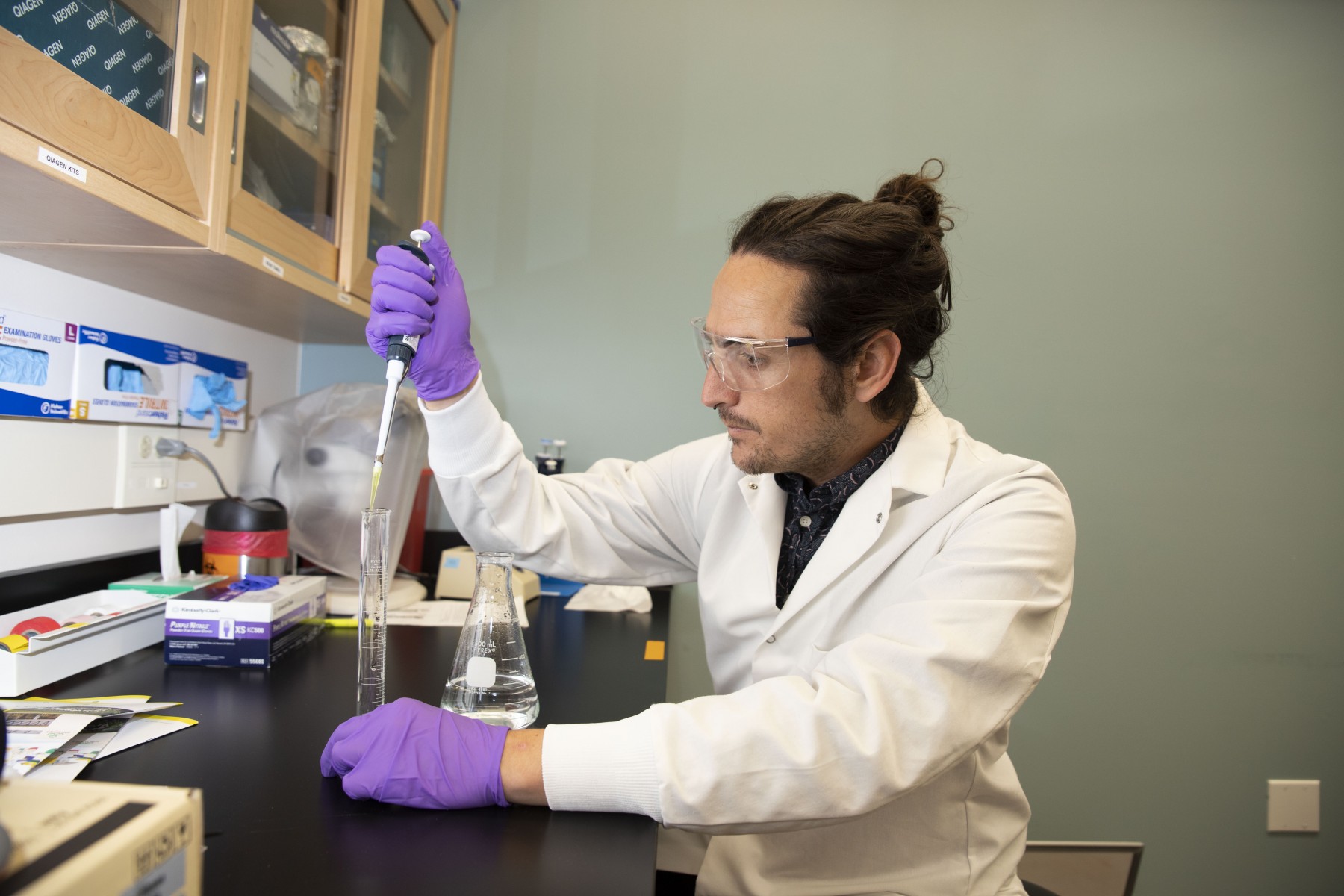 Thanks to the Bridges to the Future program, Jeff Jaureguy has been doing research in CSUSM labs since he was in his first year at MiraCosta College.