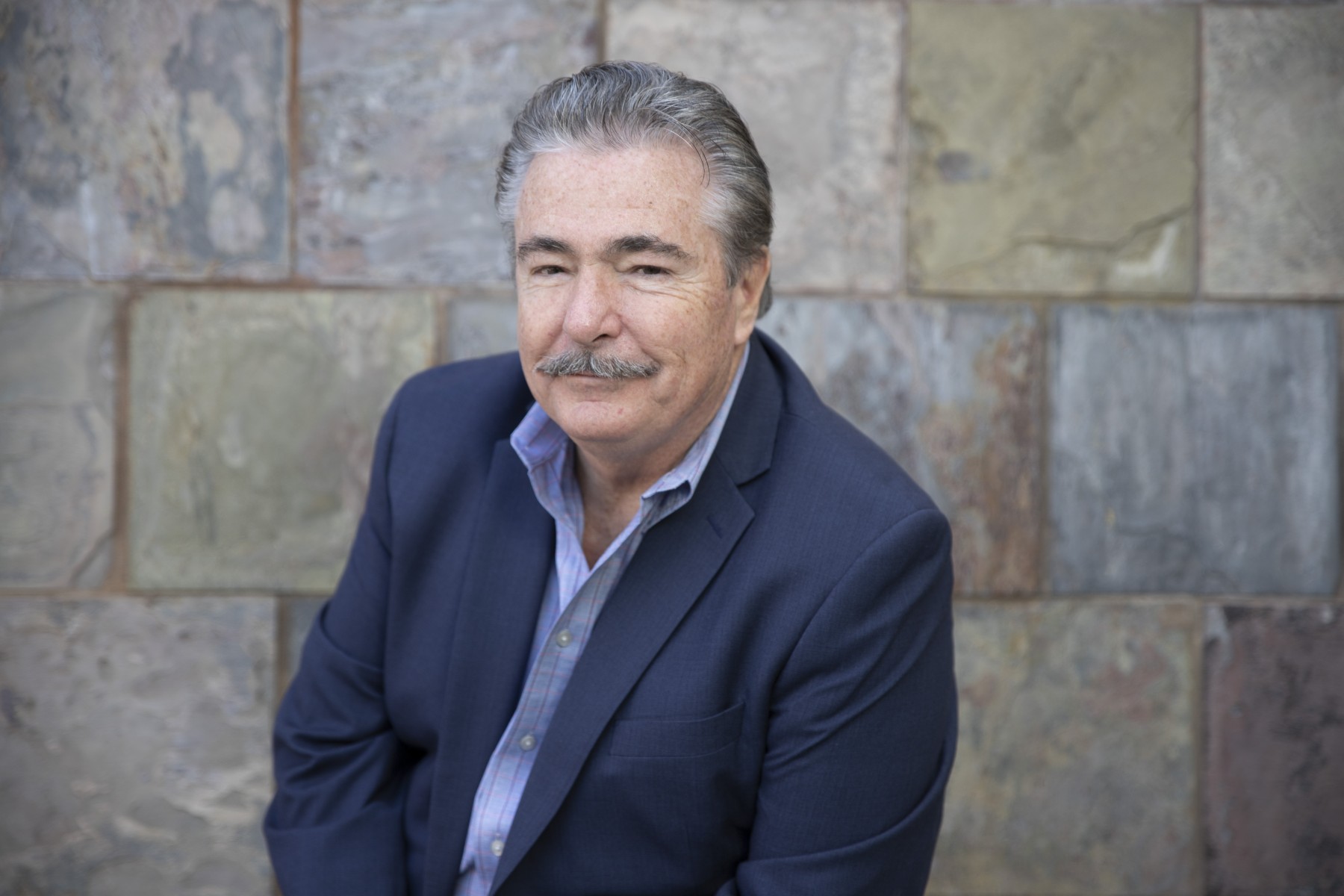 Jim Mickelson
Mickelson will retire this summer as the director of ACE Scholars Services, the program for former foster youth that he founded more than a decade ago.

When Damien Brantley was at his lowest point, when he felt like he had nothing left and nowhere to turn, Mr. Jim was there.

That was what Brantley called Jim Mickelson, the founding director of ACE Scholars Services. The innovative Cal State San Marcos program for former foster youth had opened a door for Brantley to attend college against the odds, had put him on track to graduate from college – in defiance of even greater odds.

It was all on the verge of derailing, though, when his great aunt died. This was his foster mother, the woman who had raised him and given him some semblance of stability in a chaotic upbringing. The suicidal thoughts that had bedeviled Brantley in high school returned. He worried that he might have to drop out of CSUSM, and God only knew where that would lead.

Brantley told Mickelson about his foster mother’s passing but insisted that he didn’t need help. Mr. Jim knew better. He all but ordered Brantley to go to the campus counseling center and checked in on him constantly during the ensuing weeks to monitor his recovery.

“I somehow escaped from one of the darkest places in my life,” Brantley said, “and I truly believe if he didn’t do what he did, I don’t know where I would be right now.”

Mickelson, 70, will retire this summer, along with his wife, CSUSM President Karen Haynes. He will step away from ACE, the program he created more than 12 years ago as a one-man operation in a one-room office in Craven Hall. He will travel. He will volunteer his time. He will indulge his passions for magic and photography.

What he’ll leave behind is a legacy that is reflected in people like Brantley, who graduated in 2017 with a degree in computer science and now works as a developer for a big software company in Tokyo. It’s reflected in the 64 photos that adorn a wall at the entrance to the Jan and Esther Stearns Center for ACE Scholars – each one representing a former foster youth who graduated from CSUSM and contributed to the university’s growing reputation as a national leader in producing success stories from perhaps the most vulnerable populations.

“The students in those pictures on the wall are my legacy,” Mickelson said. “I have a center, I’ve got policies, I’ve got staff, but that’s not what I’m passionate about. It really is about all these young people.” 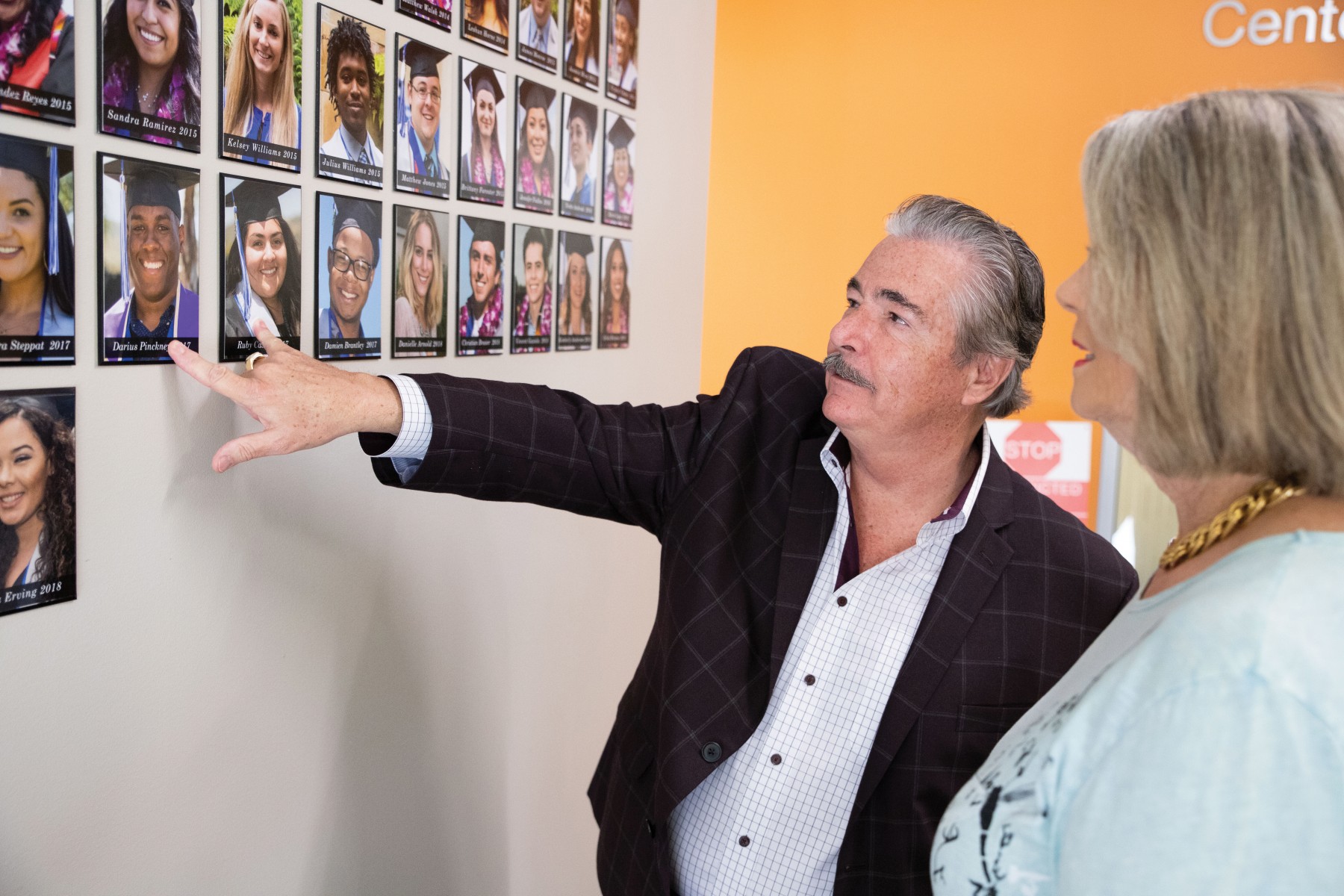 Jim Mickelson
The ACE director shows off the wall of students who have graduated from the program to donor Julie Pardee.

Finding his home on campus

Mickelson had worked with at-risk youth for decades when Haynes was appointed president of CSUSM in 2003. He had earned a master’s degree in social work from Wayne State University in Detroit. In Houston, he had started and led a nonprofit called CHILDREN AT RISK with such fervor that the Houston Chronicle labeled him “the most persistent child advocate in town.”

Relocated to California, Mickelson was looking – with little success at first – to find an outlet where he could apply his expertise. An opportunity arose when he discovered that CSUSM, under the auspices of the Educational Opportunity Program, was trying to build a program to assist former foster youth.

Mickelson offered his services as a volunteer to Lorena Checa, then the director of EOP and now vice president of Student Affairs. He still recalls the date of his first day on the job: Feb. 10, 2007.

“It was an empty office,” Mickelson said. “All I had was a phone. The computer wasn’t hooked up yet. Lorena gave me a bunch of loose-leaf notebooks from a conference she had attended. That was it.”

Mickelson started with nine students and no money. After researching previous approaches to supporting former foster youth, he decided that a different kind of program was needed. He chose the name ACE – it stands for Achieving College Excellence – then set about addressing the lack of funding as he began to develop a top-tier program.

Early seed money came from several sources, but ACE’s trajectory fundamentally changed when Mickelson met Esther Stearns, then the president and chief operating officer of LPL Financial. A parent to three foster children with her wife, Jan, Stearns called Mickelson in 2008 after reading a newspaper article about ACE and the development of the Tukwut Towel as a fundraiser.

Mickelson arranged a campus tour, after which he thought he might receive $3,000 from the Stearnses. They shocked him by giving $25,000. Their donations kept increasing, reaching $1 million in 2014 to go toward both a beautiful new center for ACE off Tukwut Courtyard and an endowment that Mickelson had created six years earlier. Named for its benefactors, the Stearns Center features a large study area with a computer lab, offices for staff and a spacious student lounge.

“We were blown away by the creativity of the program he put together. It’s unique and really based on the needs of former foster youth,” Esther Stearns said. “I find Jim’s sense for what these young people need to be instinctive and impressive. He just has touched so many lives.”

Even before the physical footprint expanded, Mickelson was creating a one-of-a-kind program. He signed agreements with regional counties (it now applies statewide) offering priority, front-of-the-line admission to foster youth who meet the minimum entrance standards, thus removing a significant barrier preventing such students from pursuing higher education. He negotiated a plan that allows ACE students to live in on-campus housing with reduced rent.

He instituted working scholarships that give students campus jobs, and a head start on a potential career (four products of that program became full-time CSUSM employees). He established seminars that help both freshmen and transfer students with their transition to a four-year university.

And Mickelson hired two full-time counselors who, like him, have a master’s in social work, in keeping with his belief that the program should be rooted in social work values. According to national statistics, three out of four foster youth want to attend college, but only 10 percent make it there, with the majority lost to homelessness or incarceration. ACE Scholars Services boasts a retention rate of about 85 percent, far above the national average of 50 percent.

“I am always moved by Jim’s ability to paint a picture of the frighteningly low graduation rates and employment figures associated with foster care, while celebrating the resilience, accomplishments and potential of the individuals impacted,” said Cecelia Kouma, the executive director of Playwrights Project, who has worked with Mickelson and the CSUSM theater department to produce plays based on the stories of ACE Scholars. “Jim cares deeply for the youth he serves through ACE.”

The youth, in turn, care deeply for him. ACE students have fondly nicknamed Mickelson “The Godfather” because he’s the one who works out complex issues that students encounter. Mickelson has come to embrace the tag, even forming a godfather’s list for students with at least a 3.0 grade-point average.

“He expects greatness, but not in a sense that he’s disappointed if you don’t get there,” said Priscilla Arciniega, a 2015 ACE alumna. “It’s more like, ‘I believe you can do anything,’ and not in a cheesy way. He wants you to go for your dreams.”

Word about ACE has gotten out. Mickelson said the chancellor from the University of Wisconsin-Whitewater came to campus in March to study the program.

“I don’t think there is another program like this in the nation. There’s no place like ACE,” Mickelson said. 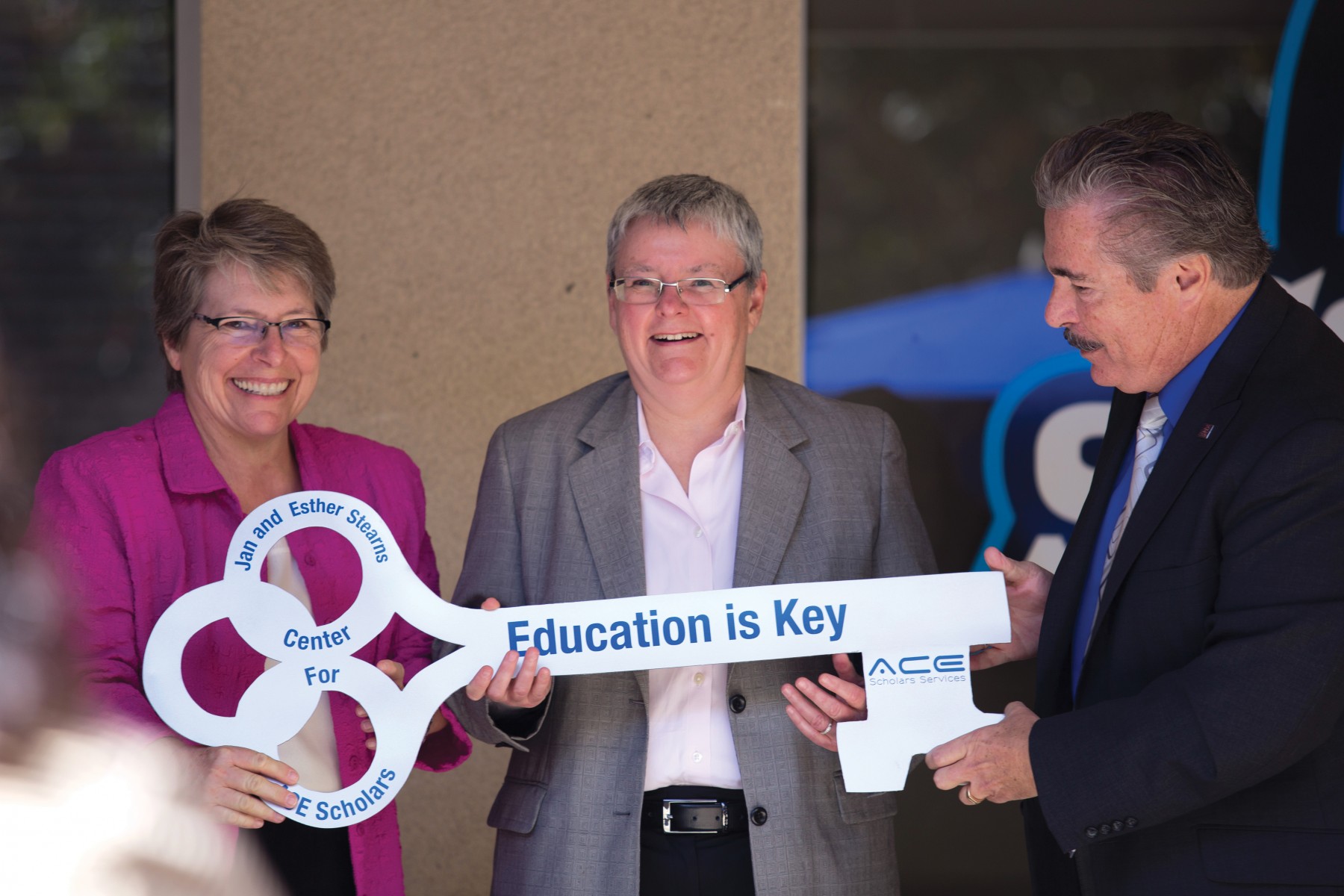 Jim Mickelson
Mickelson with Jan (left) and Esther Stearns at the 2015 ceremony to dedicate the center for ACE that bears the Stearnses' name.

‘Injustice is what drives me’

Mickelson can relate to ACE students who struggle in school. He did, too. A self-described “lousy” student growing up in a suburb of Detroit, he gravitated to non-academic pursuits like gardening and photography. He once won an award at a state fair for beets he grew, and in high school he would shoot weddings for couples who couldn’t afford a professional.

A high school adviser bluntly told him he wasn’t college material, but Mickelson went anyway. After seeming to confirm the adviser’s suspicions by failing out of Northern Michigan University as a freshman, he persisted, ending up at Colorado State University-Pueblo, which accepted him on probation.

It wasn’t until a determined Mickelson was in his master’s program at Wayne State, and almost 30, that he finally learned the source of his trouble: He was dyslexic.

“I just thought I wasn’t capable,” he said. “Even now, I probably spell at a fourth-grade level. Thank goodness for computers. I dictate all the time.”

Mickelson says pursuing a career in social work was the best choice he ever made, “other than marrying my wife.” Asked why he’s so motivated to help at-risk youth, he replied: “Probably the injustice that occurs. Given all that this country has, we do not treat our children very well. That injustice is what drives me.”

He admits to moments of sadness that soon he no longer will be the face of ACE. Fifteen former foster youth are expected to graduate in May, which would mean 79 photos on that wall in the Stearns Center.

“Most people think the foster care system is terrible,” Mickelson said. “It’s not the system. It’s what got the children into the system that’s terrible. For young people to come here and achieve a degree after all of that is really quite amazing.

“I love what the alumni photos on the wall represent and I am proud each day I walk by them of the accomplishments of those students. They are my legacy.”