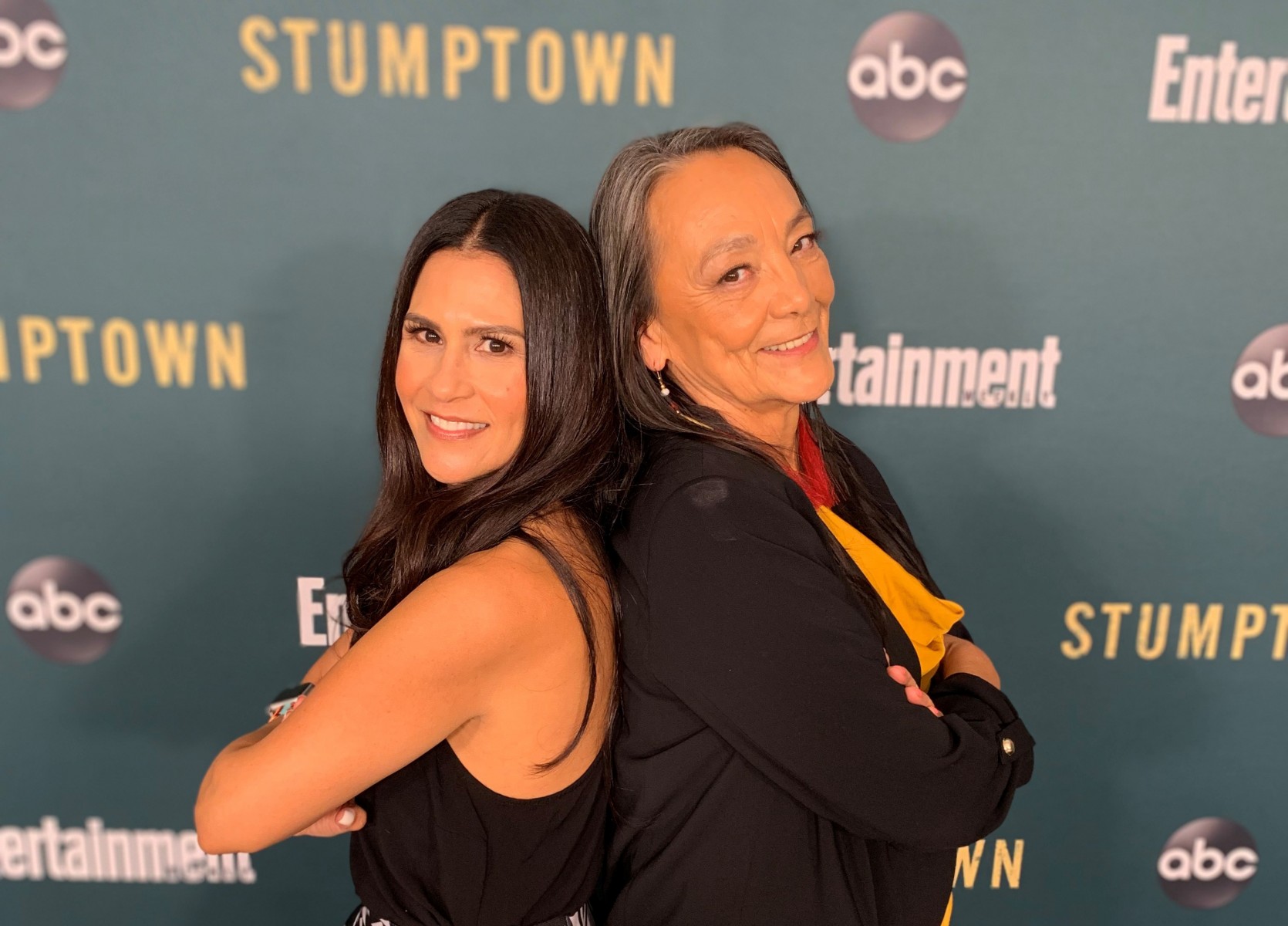 When Joely Proudfit was a young professor at San Francisco State, she began teaching a class – a version of which she still teaches today – about American Indians in film and media.

Her lectures and the course material made clear that Proudfit, a descendant of the Pechanga Band of Luiseno Indians, wasn’t happy about the state of affairs, which prompted her students to issue a challenge.

If you don’t like the way your people are being portrayed, why don’t you do something about it?

Proudfit took those words to heart. Soon after, she founded Naqmayam Communications (NaqCom for short), a public relations agency that acts as a liaison between American Indian and non-American Indian organizations and agencies. And more than two decades later, she’s still doing something about it.

Proudfit, a professor and the chair of American Indian Studies and the director of the California Indian Culture and Sovereignty Center at Cal State San Marcos, last year started another company called Native Media Strategies, which provides resources that help foster more authentic representation of Native American and indigenous peoples in Hollywood.

As part of that venture, her latest project is serving as a consultant on the new ABC series “Stumptown,” which premiered last Wednesday on ABC (future episodes can be seen on Wednesdays at 10 p.m.). Based on graphic novels of the same name, “Stumptown” – the title is the nickname of Portland, Ore., where the series is set – is a crime drama about Dex Parios, a sharp-witted military veteran who, struggling with shaky finances as well as PTSD from her time as a Marine in Afghanistan, becomes a private investigator to solve problems where the police can’t get involved.

Dex is played by Cobie Smulders, best known for the long-running TV show “How I Met Your Mother” and “The Avengers” movie blockbusters, but part of the novelty of “Stumptown” – and the reason for Proudfit’s involvement – is that one of the stars is Native actress Tantoo Cardinal. Cardinal has more than 100 film and TV credits in her long career, including “Dances with Wolves” and “Legends of the Fall,” but this is her first regular role on an American network series. Her character is Sue Lynn Blackbird, the owner of a tribal casino and the mother of Dex’s deceased boyfriend.

“I don’t take every job that’s offered me, but this one really piqued my interest,” Proudfit said. “What impressed me the most is that it has a female lead. And the native character is also a strong female, a contemporary woman in charge who’s ethical, strong, does everything for her family and tribe, goes right up to the line without crossing it.

“It’s something that I felt like I really wanted to be a part of, and I love the fact that the producers were interested in authenticity and making sure that the character I’m working with is a strong, well-rounded representative character.”

Beyond collaborating with Cardinal on her portrayal, Proudfit offers feedback to the show’s screenwriters to add nuance and credibility to the plotlines and production. For example, she adapted a script to reflect the legal and political reality of modern-day Indian reservations, and also gave suggestions on contemporary Native dress to the costume designers – even providing clothes from her own closet. 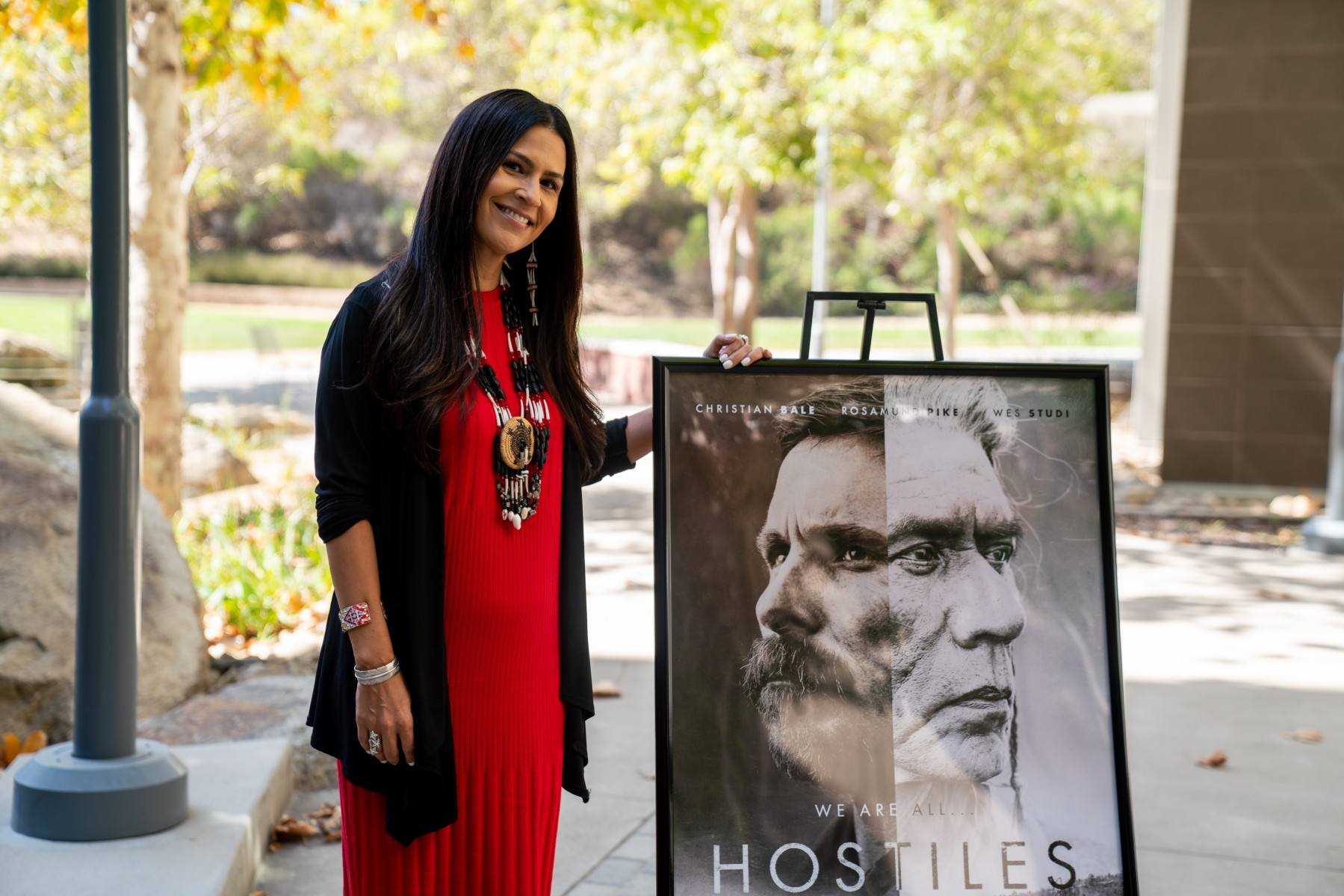 Perhaps the most high-profile project that Joely Proudfit has consulted on is "Hostiles," a 2017 Western film starring Academy Award winner Christian Bale. Photo by Chandler Oriente

“I really want to add Native representation in every capacity,” she said.

Proudfit’s contributions to the character of Sue Lynn and to small but important details in the scripts are appreciated by Cardinal.

“I was kind of astounded to get the script, to see this character and see who she is,” Cardinal told Native News Online in August. “It’s exciting to see a whole different idea of who we are and close to the truth of who we are today.”

The precursor to Native Media Strategies was a similar company, The Native Networkers, which Proudfit founded four years ago with filmmaker Chris Eyre, whose debut movie in 1998, “Smoke Signals,” was unique as an all-American Indian production and which won multiple awards at the Sundance Film Festival. Proudfit said Eyre has been a long-standing partner of American Indian Studies at CSUSM, from helping write some of the courses to contributing to Proudfit’s brainchild, California’s American Indian & Indigenous Film Festival, held each year at Pechanga Resort Casino.

It was through The Native Networkers that Proudfit consulted on her highest-profile project: “Hostiles,” a 2017 Western film starring Academy Award-winning actor Christian Bale as a U.S. Army cavalry officer who must escort a Cheyenne war chief and his family back to their home in Montana in 1892. To lend the movie the air of genuineness that it was seeking, Proudfit brought in seven linguists who speak the language of the Northern Cheyenne tribe that “Hostiles” revolves around.

“I’m looking to change the narrative, and do it quickly,” Proudfit said. “So if that means putting cultural experts in a room with writers to elevate the story, I’ll try anything, any kind of approach.”

Proudfit’s work with Hollywood – which she says she mostly does in the summer, lest it infringe on her faculty duties at CSUSM – has allowed her to rub elbows with the glitterati of the industry. She joked with her students this semester that Smulders marks the fifth cast member from “Avengers: Endgame,” the highest-grossing film in history, whom she has met in her career.

But it’s not celebrities who make her starstruck. It’s humanitarians – people like Robert Redford, a longtime champion of Native voice who has made Proudfit a regular dinner guest over the years.

“You see a lot of intersectionality with my work, with the work of my students – the research, the Native narrative, the humanitarian, the environment, the politics that I find important,” Proudfit said.

“I’m glad to offer my services to create voice and opportunity wherever I can. And when it’s a show like ‘Stumptown,’ on network television, a weekly series, it’s exciting. This is a real opportunity for Native representation.”

Veronica Anover, professor of French and Spanish for the Department of Modern Language Studies, recently received the Harry E. Brakebill Award, which annually acknowledges a professor who …
Read more

Following more than a decade as a university-level Spanish instructor in Washington, D.C., Maribeth Bandas moved to Carlsbad, where she quickly saw an opportunity that could benefit bilingual …
Read more
NewsCenter