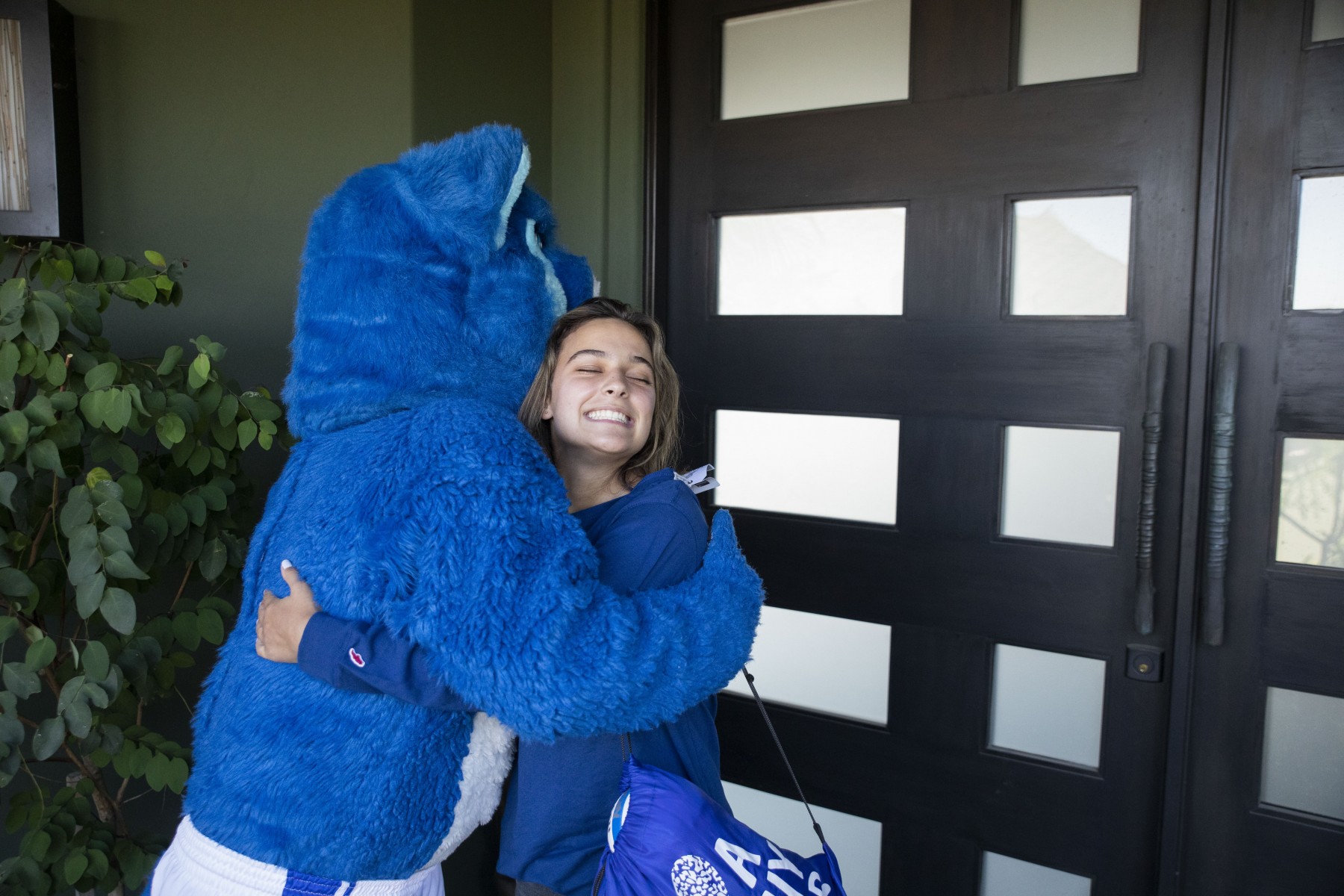 Freshman Juliana Abraham receives a surprise visit from Crash to welcome her to CSUSM. Abraham, who overcame brain tumors on two separate occasions, received a grant from Make-A-Wish San Diego to help pay for college. Photo by Andrew Reed

Juliana Abraham’s epiphany about what to do with her life occurred when she was barely a teenager.

Abraham’s life to that point had been devoted to gymnastics, the sport she loved and excelled at on a national level. At 12 years old in 2015, she was consistently winning competitions and posting impressive scores as a Level 9 gymnast, just one stage from reaching the final level in the Junior Olympics program. If she advanced to Level 10 and successfully performed all of the required skills, she would have an opportunity to try out for the Elite program – the group of gymnasts from which Olympians are selected.

“I was definitely planning on going to that Olympic level if I could,” Abraham said.

But Level 9 became Abraham’s final stop as a competitive gymnast. Not by her choosing or due to an inability to compete at such a high level. Instead, it was a diagnosis of central neurocytoma, a slow-growing brain tumor that is rare in children.

Abraham isn’t one to wallow in self-pity. She is grateful for the path she is on now as a freshman at Cal State San Marcos as she works toward her new goal. It’s a journey that has been made a little easier with help from Make-A-Wish San Diego.

Abraham had no idea she was headed for that first hospital stay in June 2015. Though she had been dealing with a variety of ailments – including headaches, blurry vision and stomach pain – she figured they were simply part of her rigorous training or side effects of puberty. The issues got progressively worse throughout the spring, with Abraham even suffering from double vision.

“I didn't know what to make of it, so I just ignored it,” she said. “People always ask me, ‘How did you ignore that? That's such a big thing.’ And I don't know. I was just training. I was focused on the sport and every upcoming competition. I just didn't have time to think about it, and you think maybe it’s normal.”

It wasn’t until her final competition of the season that Abraham mentioned the double vision to her mother, Nicole. Abraham had concurrently been having bouts of severe back pain, and her sports doctor recommended she take a couple of weeks off.

Nicole used the break to take Abraham to an eye doctor, who diagnosed Abraham with a swollen optical nerve, which is a reaction to pressure on the brain. The doctor told Nicole that Abraham needed to go straight to the emergency room for an MRI, which revealed a tumor that was larger than a golf ball.

Abraham was transported that night to Rady Children’s Hospital San Diego, where she underwent surgery for nearly eight hours to remove the tumor. When she woke up following the surgery, she was paralyzed on the left side of her body. Though doctors said the paralysis might last 8-12 months, Abraham was able to leave the hospital using a leg brace and a cane after 2½ months. Three more months of physical therapy followed before Abraham returned to gymnastics.

“I told my coach, ‘I'm coming back. I'm going to start training again,’ ” Abraham said. “And she looked at me like I was crazy. She was like, ‘Why would you come back? You almost died. This is crazy.’ And I said, ‘I don't know how to do anything else. This is my life.’ ”

Abraham eased back into training by focusing on conditioning and stretching while gradually adding to her workouts as her health improved. 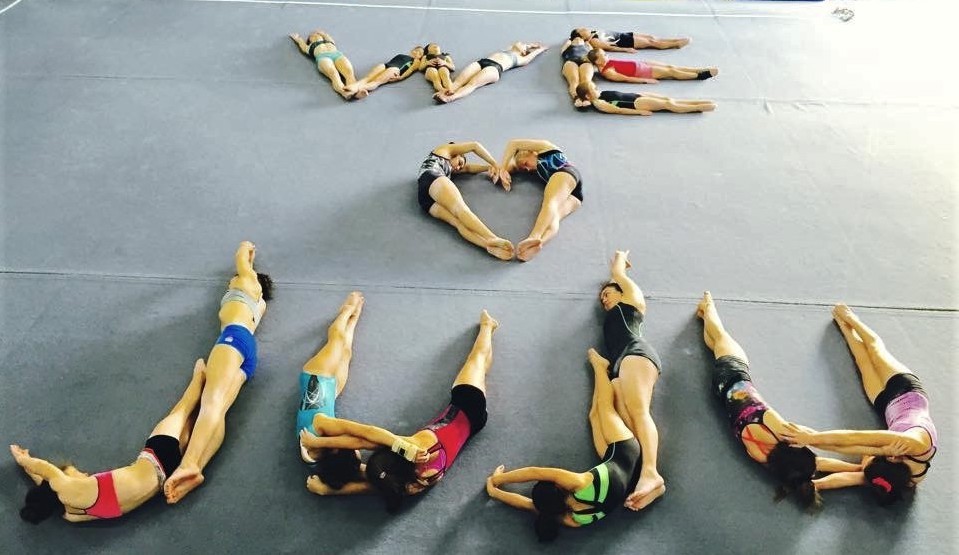 After her brain tumor diagnosis in 2015, Juliana Abraham’s gymnastics teammates show their support by forming a “We Love Juju” message, a nod to Abraham’s nickname. Her teammates shared the picture on social media with the hashtag #joinforjuju.

But it all came to a halt after a follow-up scan in March 2016 showed a regrowth of the tumor. A month later, it had doubled in size. In July – barely a year after her first operation – Abraham underwent surgery again. Doctors couldn’t completely remove the tumor because part of it was located near the hypothalamus, which plays a vital role in many functions of the body. Abraham had to undergo nearly two months of proton therapy, a form of radiation therapy that uses protons to treat cancer.

Abraham returned to the gym again after completing her treatments, but persisting through daily, seven-hour gymnastics training sessions proved difficult. She also suffered from drop foot syndrome, which meant that her leg was prone to giving out from fatigue – a dangerous prospect for someone performing complex, high-level gymnastics routines.

“I would be training and then all of a sudden my leg would just give out and I would fall,” she said. “I needed to retire. I don't like saying ‘quit’ because I didn't quit the sport. But I didn't want to put my coaches at risk or my teammates at risk or myself at risk anymore, so I retired.”

It has been three years since Abraham stepped away. She stays active by working out at home and going on hikes and bike rides. But it still feels strange to her after so many years dedicated to gymnastics.

Focusing on the next stage of her life helps. Abraham, whose family lives in Escondido, wanted to remain in California for college, and she knew that she wanted to pursue a career as a pediatric nurse. Though many nursing programs in the state are impacted, CSUSM offered an alternative that no other university did – an opportunity to major in kinesiology. Abraham had never entertained the thought of majoring in something other than nursing, but the more she looked into the kinesiology program, the more she realized it would be a perfect fit.

The first was learning that she had been accepted to CSUSM’s TRIO Student Support Services, a program funded by the U.S. Department of Education to support students who meet at least one of the following criteria: They come from a low-income background, they are a first-generation college student and/or they have a verified disability. The program offers academic, personal and professional support to increase the retention and graduation rates of participants.

“In only four months, Juliana has been an outstanding TRIO SSS student,” said Perla Rivas, a TRIO SSS counselor. “I spend considerable time working with the scholars in various workshops and other activities, and it was quickly obvious to me that Juliana is bright, inquisitive and motivated. If you gave 100 students a rare learning opportunity, you would walk away realizing Juliana was the most appreciative, eager and excited student of the group.”

The other surprise came during one of Abraham’s check-ups with her neuro oncologist. He wanted to refer her to Make-A-Wish, which works to empower children battling critical illness by granting them a wish. Abraham is determined to graduate from college without debt, so she asked if a college scholarship or grant was possible. A short time later, she learned that she was receiving a $10,000 grant from Make-A-Wish, funds already helping to cover costs of her first semester at CSUSM.

Despite the roller coaster of the past five years, Abraham wouldn’t change a thing. Her future may look different than what she imagined before her initial diagnosis, but she knows it’s a future that remains bright.

“I always look back at it now and I’m so grateful that I went through it because I would have never been able to meet the people I've met, been through the experiences I've been through,” she said. “I've made so many connections in the medical community and with my doctors. My neurosurgeon and my neuro oncologist are like uncles to me. I love them to death. There's so many little things that I would have never experienced if I didn't go through what I went through.”