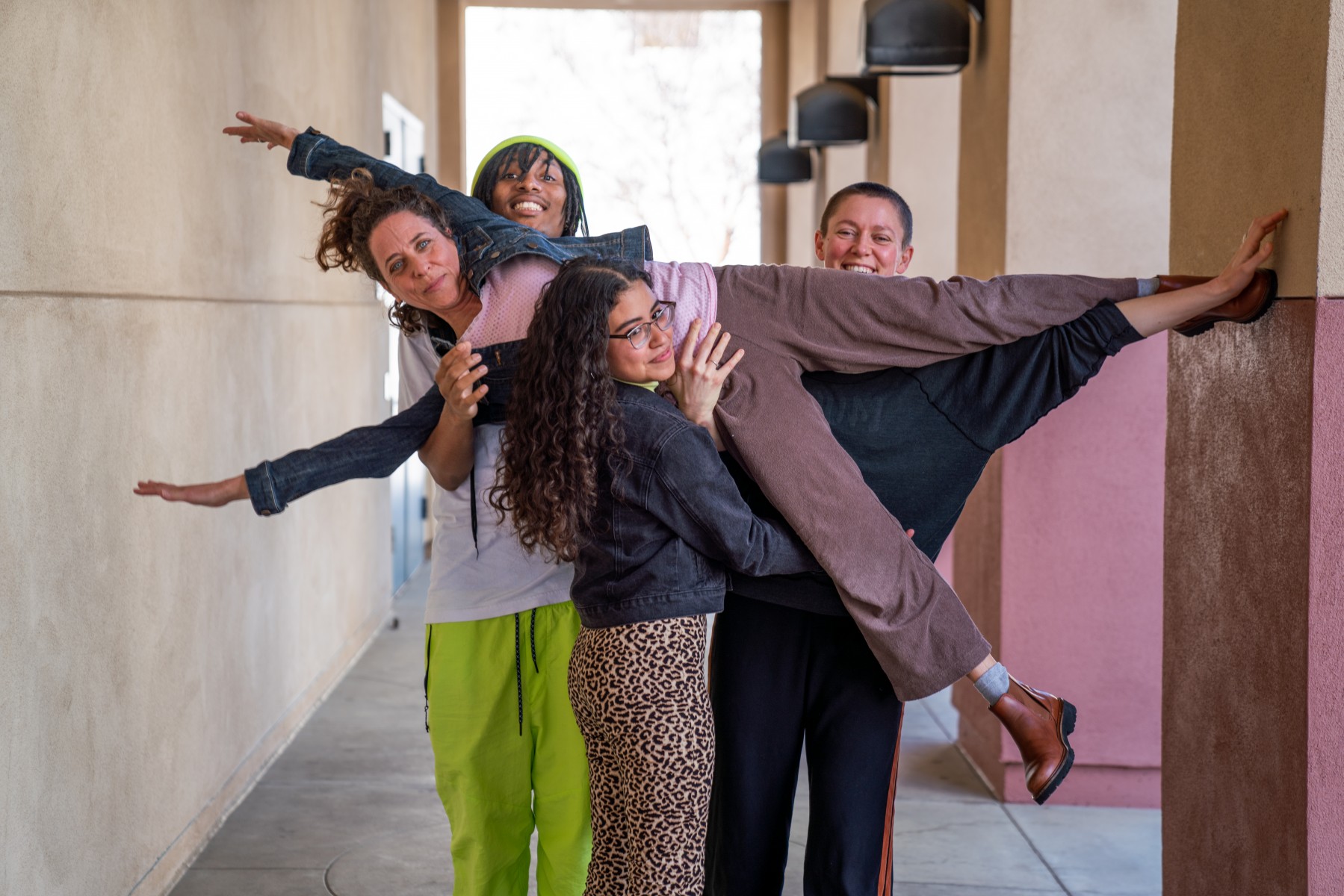 Karen Schaffman is lifted up by (from left to right) Caiser LeBoss Owens, Lesly Rodriguez and Anya Cloud. Photo by Chandler Oriente

Karen Schaffman has been drawn by the allure of dance since she was a young child growing up in Bloomfield, Connecticut. When Schaffman was a toddler, her mother enrolled her in a summer creative dance class at the playground down the street from their home.

“That was the beginning of knowing that I loved dancing in a community setting,” said Schaffman, who has been teaching dance at Cal State San Marcos since 2001.

These days, Schaffman is doing more than dancing in a community setting. Her Performance Lab, which partners with the CSUSM Community Engaged Scholarship and Service Learning programs, is being hailed for projects ranging from presentations at the George G. Glenner Alzheimer’s Family Centers in both Chula Vista and Encinitas and for its budding collaboration with the Escondido-based A Step Beyond, which employs contemporary dance as a tool to empower youth and guide them as they mature. Schaffman instigated and founded the campus partnership with A Step Beyond in 2015.

Schaffman’s efforts are drawing attention throughout the region and beyond.

“We’re giving our students an opportunity to impact the community,” Schaffman said.

Nowhere is that more evident than at the Glenner Alzheimer’s Family Centers, where nearly a year of research and rehearsals led to a Veterans Day performance before an audience whose memories are being slowly erased by the ravages of dementia.

The project evolved when Veronica Anover, then interim faculty director of Service Learning, reached out to Schaffman about the idea and the two visited the Glenner facility in Chula Vista. For nearly a year, several hundreds of hours were spent laying the groundwork for the performance via emails, phone calls, meetings on and off site, recruiting students, and more. Lecturers Thomas Chu and Anya Cloud were brought in to teach various dance styles and choreography. 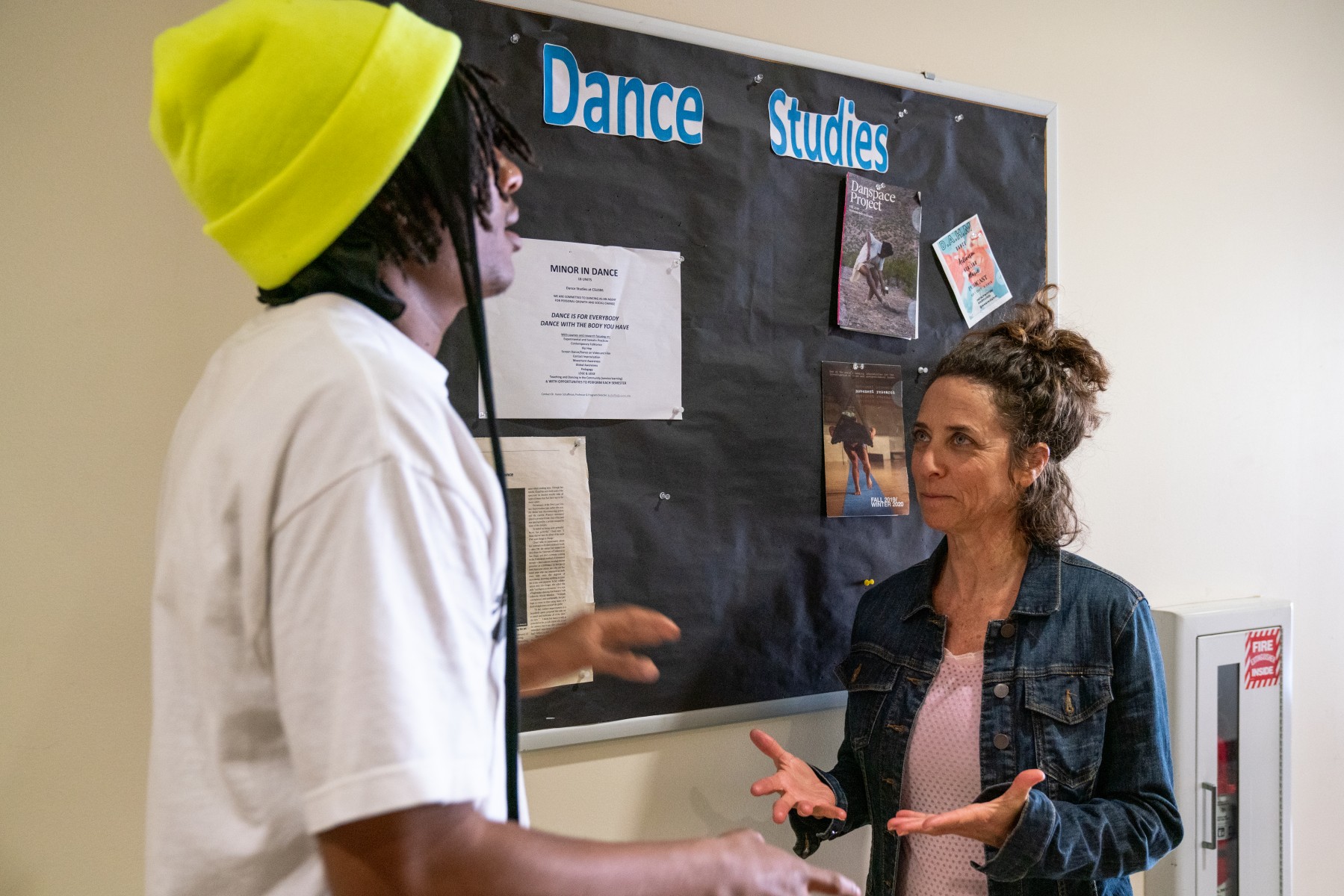 Ten students, all with minors in dance, signed up. Lesly Rodriguez was among them.

“You start from nothing, build from there by working with your peers, and the end product is something that benefits the community,” said Rodriguez, who noted that students were tasked with researching Alzheimer’s disease and memory care, the music of the 1950s and popular clothing at the time, even bringing in an expert on the style of post-World War II dress from the Fashion Institute of Design & Merchandising in Los Angeles.

The Veterans Day choreography covered swing, hip-hop and improvisation, and it was followed by seniors joining students as they cut the rug on the dance floor.

“Based on the reactions we got, it was something they enjoyed tremendously and an experience they don’t get very often,” Rodriguez said. “It was the culmination of an ongoing process that was all about collaboration.”

“The important thing is discovering how we can radically transform our world through collaboration,” Schaffman said. “Dance teaches collaboration, something that is desperately needed in these times.”

Schaffman’s body of work is steeped in partnership. Her varied projects include co-founding the avant-garde collective Lower Left, housed for several years in San Diego at SUSHI Performance & Visual Art; participating in the European dance collective Veronika Blumstein; and dancing with LIVE – a regional, weekly, improvisation-based practice group. Schaffman earned her doctorate in dance history and theory (now called critical dance studies) from UC Riverside with a dissertation titled “From the Margins to the Mainstream: Contact Improvisation and the Commodification of Touch.” She built and leads the CSUSM Dance Studies program.

Schaffman has played a critical role in bringing more than 150 events to the North County community. Dance Studies recently launched the Experimental Dance Project, which invites professional artists concerned with matters of social justice to work with students through politically driven dance residencies.

“My teacher, Deborah Hay, said, ‘To dance is a political act,’ and I follow and live that credo,” Schaffman said. “We learn about one another through dancing together. We learn about ancestries, culture, diverse identities, and appreciate our differing anatomies. Through dance, we share space, place, stories, experiences and sensations. We inspire and respect one another. We sweat. And we keep going.

“Dance is the experience with which we know the world.”