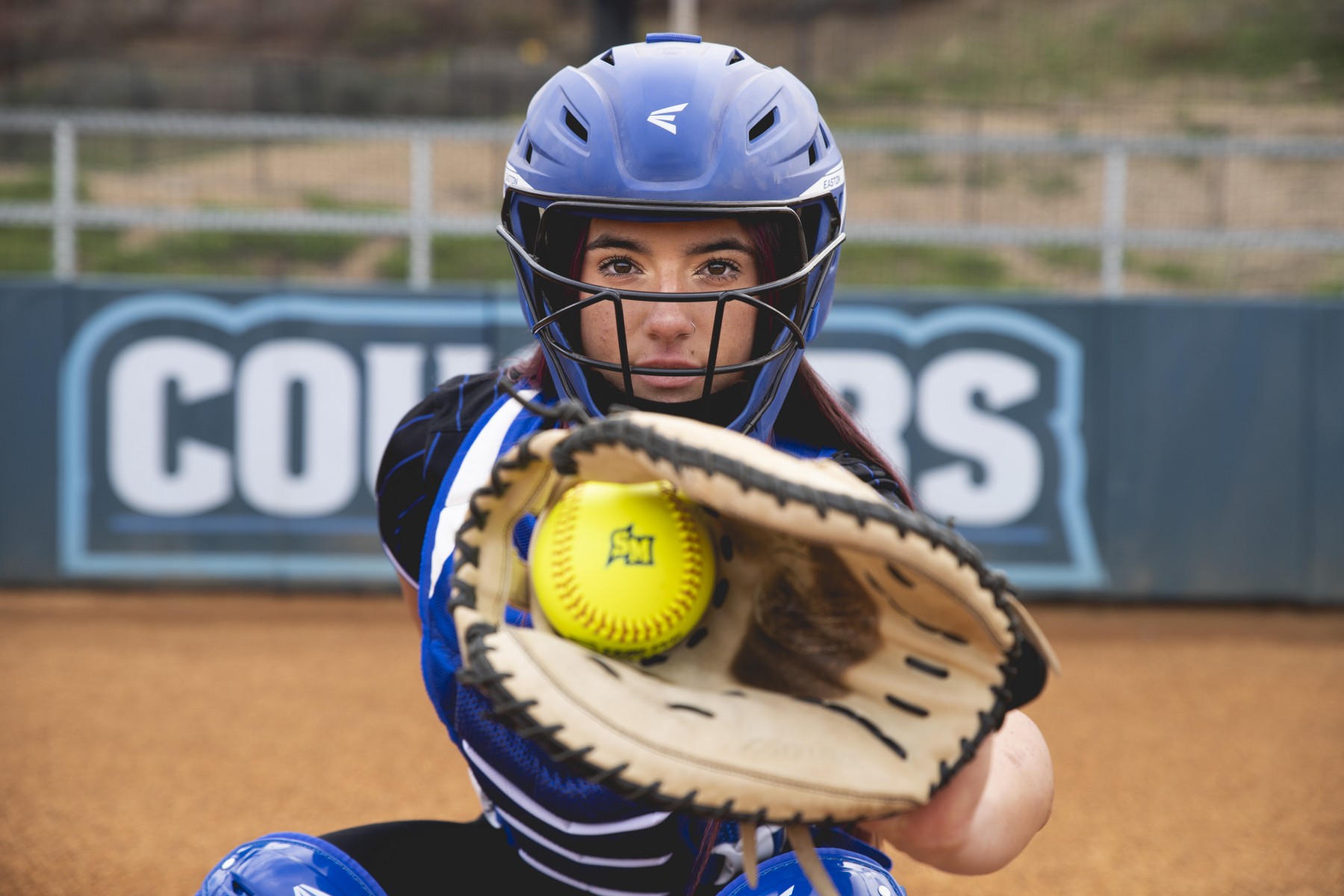 Lombardi adeptly switches positions without skipping a beat, able to start at catcher in the opening game of a doubleheader before moving to shortstop for the finale. She was one of the team’s top hitters as a freshman during the abbreviated 2020 season, and picked right up as a key contributor in 2022 after the 2021 season was canceled due to the pandemic. And she has arm strength that led one of the university’s baseball coaches to wonder aloud during a scrimmage if Lombardi can pitch – and he didn’t mean for the softball team.

“Most females do not throw a ball overhand like she does,” Ewing said. “If you come to a softball game and you watch everyone play catch and then you watch Gianna pick up a ball and throw it, you don't even need any sports knowledge to know it’s a whole different level.”

For the record, Ewing made it clear to the baseball coaches that Lombardi wasn’t going anywhere. But Lombardi’s value to the team goes beyond her considerable athletic ability.

“You get in a room with her, and she just fills it in a positive way,” Ewing said. “She’s funny and charismatic. When new people come in and they're around our softball program and they see that she can be who she is, they know they can be who they are.”

Lombardi’s infectious personality and approach to life harken to her father, Phil. The pandemic has taken a toll in so many ways, but none more difficult for Lombardi than losing her father in May 2021 to complications from glioblastoma, an aggressive form of brain cancer. Most people diagnosed with glioblastoma die of the disease within 12-18 months. Phil’s death came only seven months after his diagnosis.

But the lessons Lombardi learned from her father continue to resonate.

“He taught me to be proud of myself, but also to be humble,” Lombardi said. “But I think the biggest thing he ever taught me was he would always say, ‘Don’t fear failure.’ Especially in a game like softball, you fail more than you succeed when you’re hitting. I just always kept that with me.”

It was something Phil knew firsthand from his days as a major league baseball player. A third-round draft pick of the New York Yankees in 1981, Phil made his major league debut with them five years later and spent parts of three seasons in the big leagues (including one with the New York Mets) before nagging injuries led to an early retirement before the 1990 season.

Phil coached Lombardi’s older sisters, Lauren and Julia, in softball, and both went on to play for Long Beach State. Lombardi flirted for a short time with the idea of trying something different than her sisters, but quickly realized it was more fun playing softball and benefiting from the experience and knowledge of her father and sisters.

Lombardi never had a chance to see her father play professional baseball – she was born more than a decade after he retired – but knew about his career growing up, even if she didn’t always realize when he was pulling her leg.

“I didn’t really know much about the game when I was younger, and he would joke, ‘I used to play with Jackie Robinson.’ And I thought he was serious,” Lombardi said of her father’s reference to the iconic Hall of Famer who broke baseball’s color barrier in 1947 – four decades before Phil made his major league debut.

“But he didn’t bring up his career around other people. He was really humble about things.” 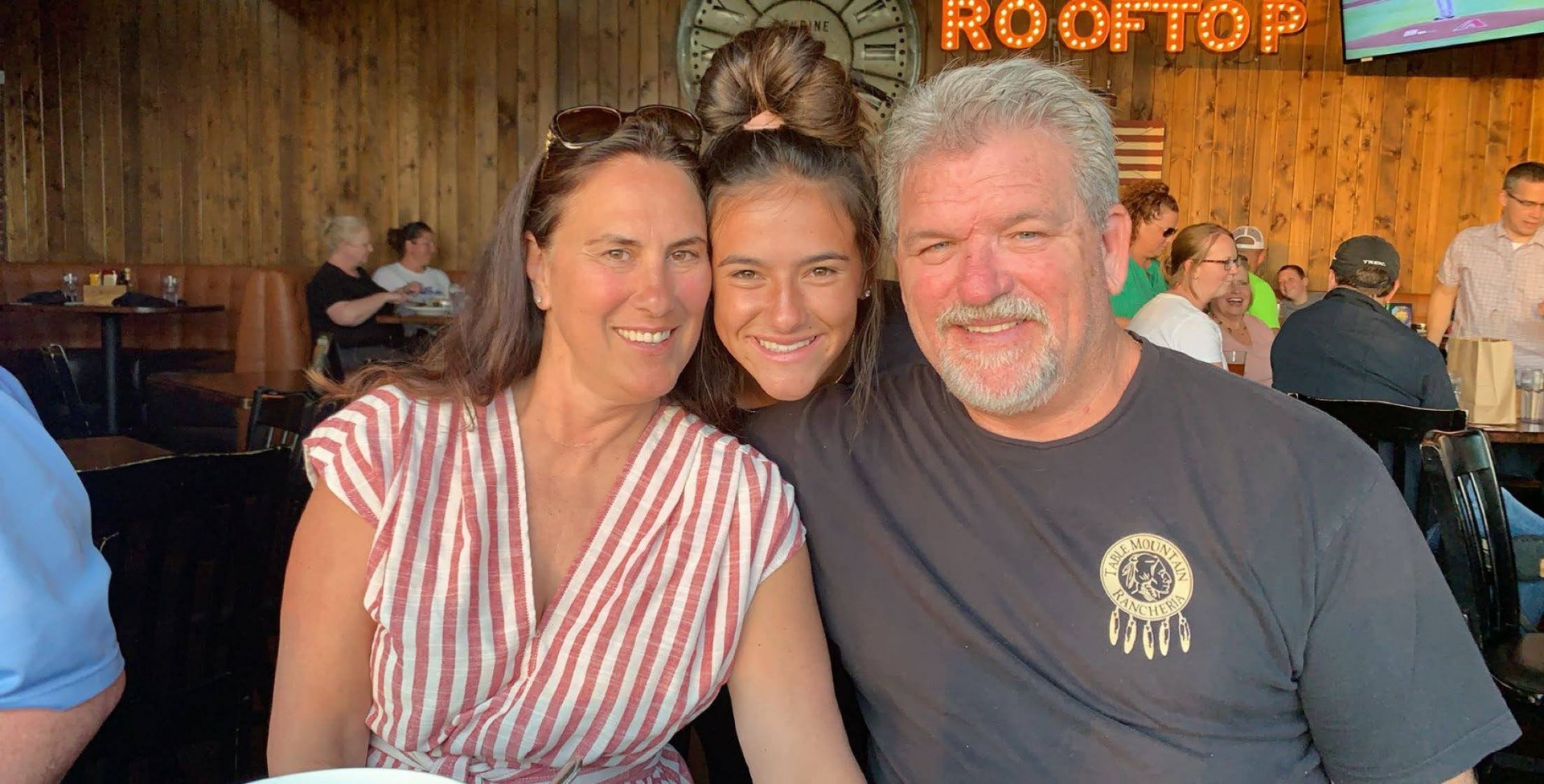 Playing catcher was a natural choice for Lombardi. After all, it was Phil’s primary position during his career. And while nepotism may be an issue on some youth softball teams, having her father as a coach didn’t come with any special favors for Lombardi. Phil even insisted on Lombardi calling him “Coach Phil” instead of dad when they were anywhere near the softball field to avoid any thoughts of favoritism.

Of course, with Lombardi’s work ethic and ability, it didn’t matter if it was her dad or a complete stranger coaching – she was going to be in the lineup. Lombardi thrived at West Ranch High School in Valencia and on travel ball teams. One of her frequent adversaries was Zoe Ballen, who played at Thousand Oaks High School about 40 miles away and was also a foe in travel ball. They are teammates at CSUSM now, but Ballen still remembers being in awe of Lombardi’s boundless energy and the difficulties she presented opponents.

“When I came to CSUSM, I was kind of nervous to get to know her,” said Ballen, a pitcher who frequently throws to Lombardi behind the plate. “But she just kind of exceeded my expectations of the kind of person that she is and the kind of player that she is.

“She's great at communicating with all of our pitchers and has a great relationship with everyone on the team. I don't think I've ever heard a negative thing come out of her mouth. She’s just an overall great person and player.”

Lombardi started all 19 games in 2020 before the pandemic brought a premature end to the season and completely wiped out the 2021 slate. But she gave a glimpse of what she’s capable of in those limited games, batting .356 and impressing Ewing and teammates with her softball acumen.

Ewing may have as many as three more seasons with Lombardi after this. The NCAA adjusted its rules on playing eligibility because of the pandemic. So while Lombardi has completed her third year at CSUSM as a biology student, she will still be a sophomore next season in her softball eligibility.

All of Ewing’s players faced an adjustment this year as they completed their first full season in three years, but Lombardi had the added weight of playing her first season without her dad.

Phil was a familiar face at games in 2020, sometimes observing from beyond the center field fence and other times sitting right behind home plate where he could offer encouragement (and occasionally critiques) during games. But Lombardi is persevering, just as her dad would want.

“We had our offseason games during the fall, and I was kind of crying on the way to my first game,” she said. “It was my first game without my dad being there. It was kind of sad, but I always do look on the positive side of it, and now it's like I’m playing for him more than playing without him.”