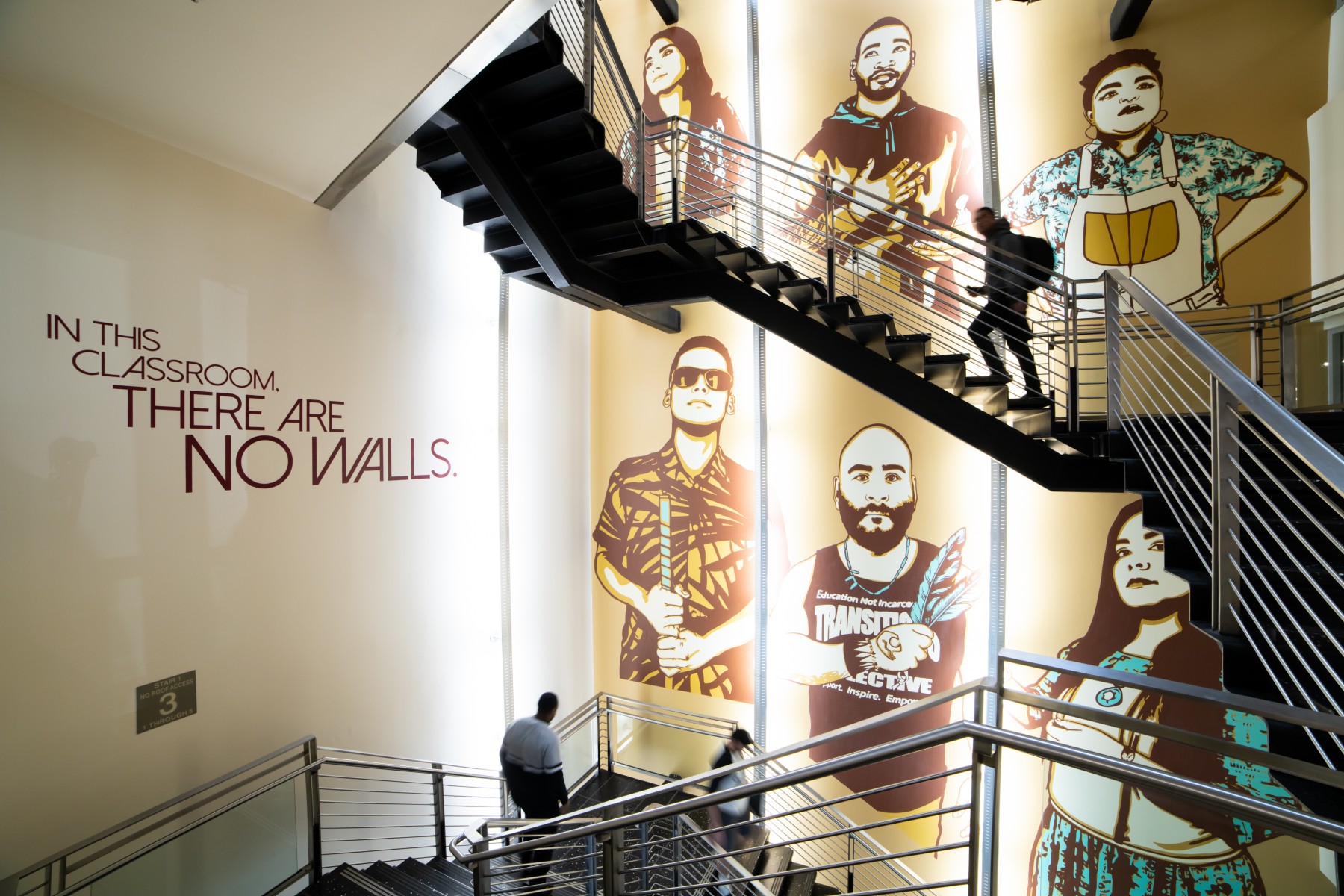 In This Classroom, There Are No Walls
The mural spans from the second to fourth floor in the center stairwell of Kellogg Library.

Staircases by their very nature are passageways. But one stairwell at Cal State San Marcos is causing passersby to pause. Spanning across two floors in the architectural center stairwell of Kellogg Library is a mural titled “In This Classroom, There Are No Walls.”

Painted in subdued yet boldly contrasting earth tones with teal accent, the mural depicts six students and alumni, each evoking an expression of fearlessness that commands attention.

“We live in a moment in which human rights are being challenged, and the idea of a classroom without walls implies to me a sense of creativity and not being bound or constrained by a traditional or typical way of building knowledge,” said Char Booth, associate dean of the library, who led the three-year effort to bring the mural to life.

The public art piece was created by first-generation Colombian-American muralist Jessica Sabogal, who after earning her degree in political science turned to art as a medium to promote social change, action and empowerment. Sabogal’s work is seen worldwide, many several stories tall on the side of urban buildings. In 2011, she was the first female artist commissioned to paint murals at Facebook headquarters in Menlo Park.

The theme of Sabogal’s mural materialized after she read an article about a teacher, who in witnessing the political rhetoric becoming more polarized wrote on the chalkboard, “In this classroom, there are no walls. You belong here. You are loved.” That message resonated with Sabogal, as both the daughter of immigrants and as a queer artist.

“It was a message of warmth and of community, and it got me thinking about spaces and inclusivity,” she said.

“When I envisioned this mural, well before I ever met the students who would be featured, I didn’t want to portray joy – even though it may evoke joy, validation or visibility for others – I wanted the mural to evoke a fearlessness in the subjects, who were stoic and serious about being a united front regardless of their identities and standing behind the message.”

“The mural is a statement about the importance of creating a campus without borders, and of celebrating it with open hearts and minds,” said Booth, during remarks at the unveiling on Feb. 11. “Here, we welcome a spectrum of identities and backgrounds, and so everyone, even the most marginalized, can thrive in an environment of uncompromising support.”

The dynamics of the mural change as viewers climb up and down the stairwell and experience different perspectives, sometimes coming face to face with the mural’s subjects.

“The images are powerful and reassuring,” said David Avalos, professor emeritus of art and member of the Campus Public Arts Advisory Group, which helped bring the abstract idea of inclusivity to life. “The subjects are calm, confident and self-assured human beings, and their presence will continue to speak to students, librarians, faculty, staff, coaches, administrators and visitors for generations to come.”

“Coming into college, I came with this intention that I wanted to get involved and I wanted to do something that left a lasting impression,” said Mars Waddy, one of the six subjects featured in the art piece. “I didn’t expect to be recommended for a mural.”

The first of three images, ascending the staircase between the second and third floors of the library, are Jeff Mata, Martin Leyva and Nesune Madrigal. Mata, set to graduate with his business degree in May, became blind in his early 20s as a result of a boxing injury. After overcoming bouts of depression and addiction, Mata is a three-time world champion in Brazilian jiu-jitsu, competing against sighted athletes, and a motivational speaker for the Fellowship of Christian Athletes.

To his right is Leyva, who spent two decades in and out of jail and prison. While completing a master’s degree in sociological practice at CSUSM, Levya established Transitions Collective to support fomerly incarcerated students and their allies. Madrigal, an American Indian nursing student, will graduate this spring and looks forward to bringing her new skills back to her tribal community to improve Indian health care.

On the stairwell above them, leading to the fourth floor, are Waddy, Louis Adamsel and Lisa Flora. Waddy, who is studying psychology, is a passionate activist for intersectionality and works as peer educator in the LGBTQA Pride Center. Last year, he was honored with the Tukwut Leadership Circle’s Freshman of the Year Award. In the center is Adamsel, the second alumnus featured in the mural. An Army reservist and former foster youth, Adamsel served as ASI president in 2017-2018 and helped establish the Black Student Center and the ASI Food Pantry, among other initiatives. Flora, a standout cross country student-athlete, overcame a severe knee injury after high school and went on to compete in the NCAA Division II national championship, in addition to being a two-time All-West Region honoree. After she graduates this spring, she hopes to become a police detective.

“The six students we chose represent the incredible diversity of this campus,” Booth said. “When we commissioned this mural, we wanted something that you can’t ignore in this building – and that’s what we got.”

The unveiling of the mural serendipitously coincided with the 15-year anniversary of Kellogg Library, which opened in 2004, shortly after President Karen Haynes’ arrived. Since that day, more than a million people have walked through the library’s doors.

“For me to be here for a few years and be coming through the stairwell and go to a study room or find a book, then suddenly I know that I’m here and I’ve left a mark, I think that’s incredible,” Flora said.

“I’m proud that our library not only aids the intellectual pursuits of our students, faculty, staff and community, but also works to ensure inclusiveness, celebrates diversity and fosters social justice,” Haynes said during the unveiling ceremony.

“The Kelloggs believed strongly in the power of education and the importance of access to students of all backgrounds. Much like the Kelloggs’ philanthropy, this mural serves as an important example of all of the ways that we come together in that spirit each day.”

The mural is available for viewing during University Library hours.

The first Arts & Lectures event of the spring semester features pianist Daniel Adam Maltz. The concert will take place in Arts 111. The event is free for Cal State San Marcos students, who can …
Read more