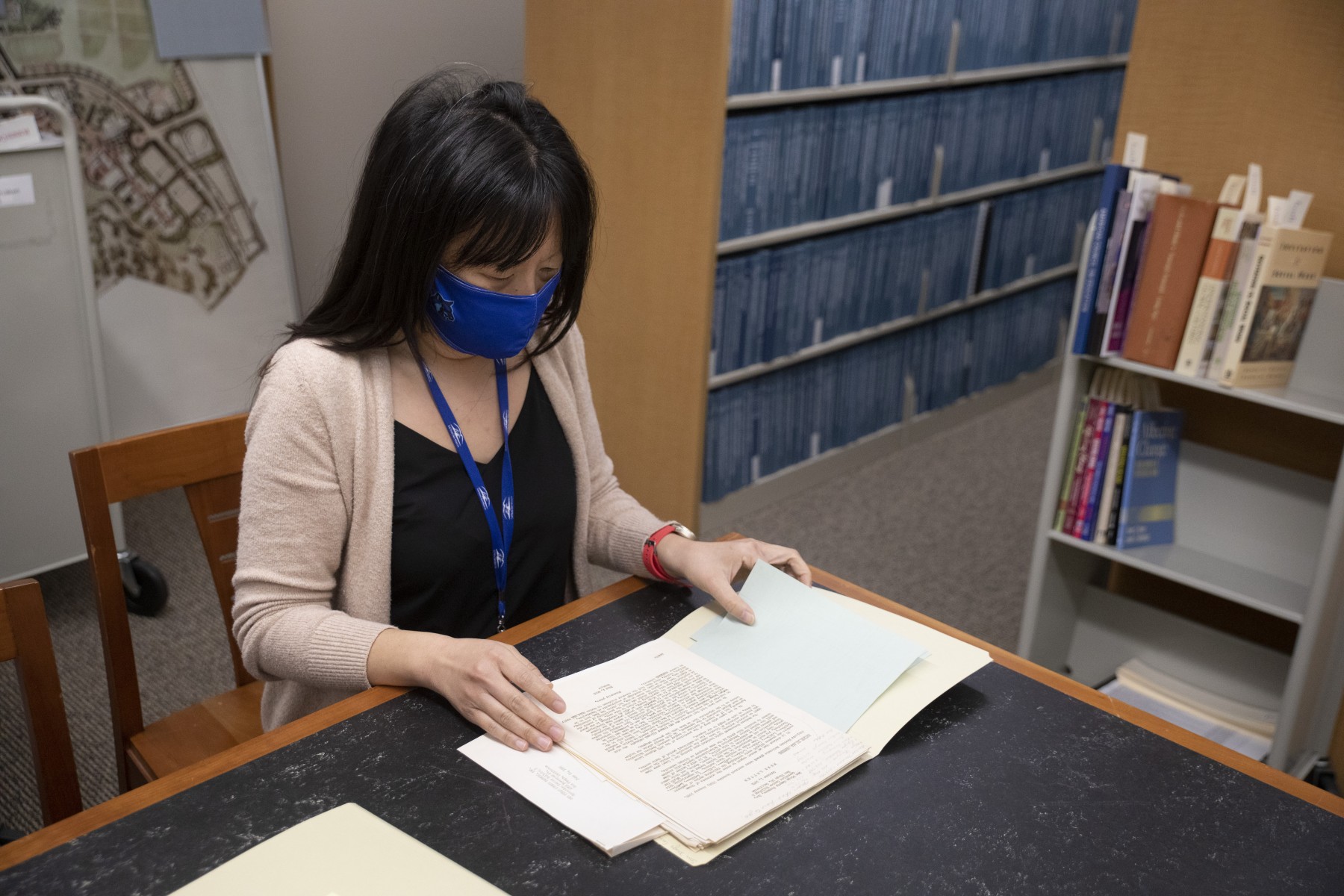 Jennifer Ho, an archivist for the University Library, examines documents that are part of the Ecke family collection. Photo by Andrew Reed

Paul Ecke III awoke on New Year’s Day eight years ago facing the most daunting of resolutions: the house project to end all house projects.

On the final day of 2012, Ecke had completed the sale of his family’s storied Encinitas ranch to the Leichtag Foundation, a local nonprofit. As part of the transaction, he had negotiated a one-year lease-back, which meant that he had one year of access to every square foot of the sprawling property – one year to sift through literal barns full of stuff accumulated during more than a century of business for a family that had become, in Ecke’s telling, the Microsoft of growing poinsettias and selling them around the world. Such was their market dominance.

What to do, Ecke wondered, with the overwhelming cache of business records, flower catalogs, family photos, correspondence, maps and other documents that surely possessed historical value, given the Eckes’ prominence in the building of North County going back to his great-grandfather’s immigration from Germany in the early 1900s?

“Most people just have to clean out their garage once in a while, or they move,” Ecke said. “We hadn’t moved in 100 years. So I found myself digging through 100 years of Ecke stuff, and it was quite a task.”

As Ecke dove into the initial legwork, spending months sorting and organizing and, yes, purging with the help of a local historian, he thought more and more about a permanent home for his family’s archives. What better place than a local, growing university that could give the collection the attention and space that Ecke thought it deserved?

By the end of 2013, Ecke had donated hundreds of boxes worth of materials to CSUSM, thus establishing the foundation of what became the library’s Special Collections department. Eight years later, the partnership between the Ecke family and CSUSM is stronger than ever.

Late last year, the Eckes gave $80,000 to the university in continued support of a collection that formally is called the Paul Ecke Ranch, Inc. Business Records and Family Papers. That raised the family’s total giving to more than $350,000 dating back to their first gift in 1996.

“There are so many benefits to having this collection at the library,” said Jennifer Ho, an archivist for Special Collections. “Local history is the main thing. When most people think of San Diego, they think of the coast or downtown or the border areas, but there’s not enough attention given to the North County area. So that aspect is huge. The business was started by an immigrant, so you’ve got that immigrant-hustle, American Dream story. And it started as a small business, so you have some business history there.

“And, of course, the poinsettias angle. We think of poinsettias as the traditional holiday flower, but it’s just because of the Eckes’ incredible marketing that that’s the case.”

Ho’s position as the archivist in charge of the Ecke collection exists thanks to funding from the Eckes. A 2007 alumna of CSUSM, Ho was hired in November 2019 to build on the work of her predecessor, Aditi Worcester, who organized and created an inventory of the materials in the collection.

One of the first things Ho did upon arriving at her alma mater was take a tour of the ranch at the invitation of Paul Ecke III and his sister, Lizbeth. Paul whisked Ho and colleagues Jennifer Fabbi (library dean) and Sean Visintainer (head of Special Collections) around the property in a golf cart, under the theory that it’s easier to understand the history of a place once you’ve seen it with your own eyes.

“It was a really great all-day tour, telling us about the buildings and the home they used to live in and all the research and development,” Ho said. “They’re lovely people. And we email a few times a year about materials they want to add to the collection or photos that I’ve put online.” 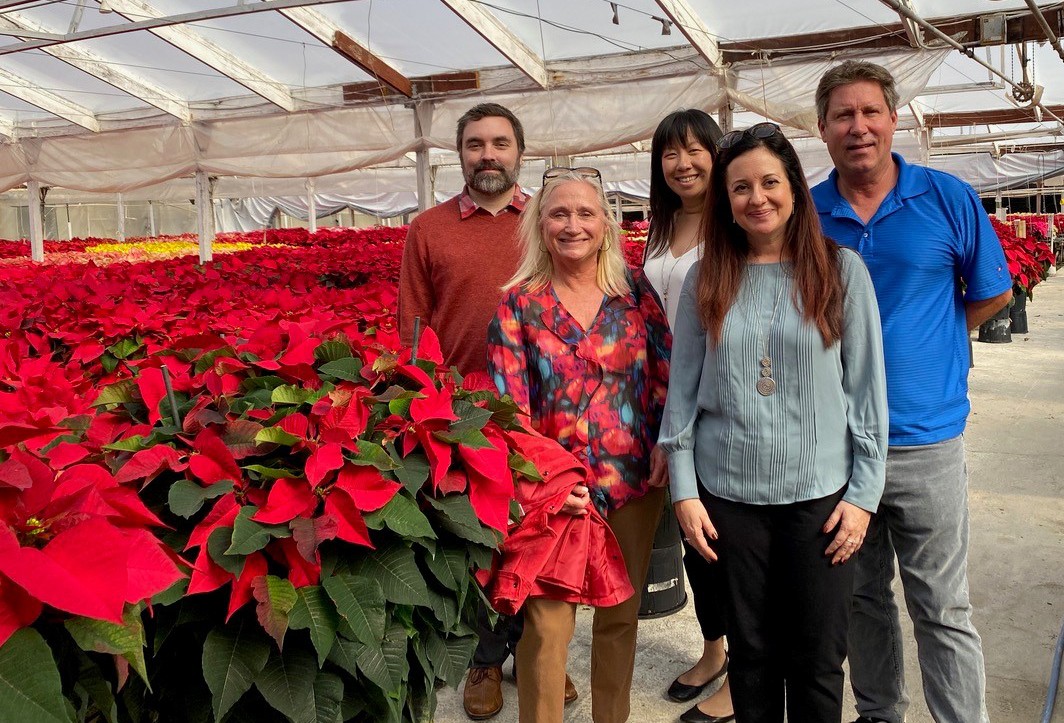 Ho had been in her job for only a few months when the coronavirus pandemic struck and forced the closure of CSUSM’s physical campus, including the library. For nearly a year, Ho has been able to work from inside the library just one day a week, which has slowed the progress of her primary task: scanning the reams of documents and turning them into digital files. She anticipates that the pace will pick up considerably when campus reopens and the library can bring on student workers to assist her.

Having pored through most of the collection himself before he donated it, Paul Ecke has some personal favorites. A canceled check for a 50-cent sack of flour from the Great Depression. The annual catalogs that detailed the ranch’s stockpile of poinsettias and other flowers. Large aerial photos of the property arranged for by his grandfather, Paul Ecke Sr., nicknamed “Mr. Poinsettia” as the man who cultivated the business into a global force.

“For me, those photos are a fascinating historical record for an era before Google Earth,” Ecke said. “I think they’re going to be great for future generations.”

Materials directly related to the poinsettia business are the primary draw, but as Fabbi says, "this local history collection also provides a magnifying glass through which to examine national and global happenings over many decades.”

Nearly a decade after he first began tackling the mountain of artifacts on his family’s ranch, Ecke feels as invested in the project and CSUSM’s work as ever. He relishes the regular check-ins with Ho and colleagues to review, explain and clarify things.

“Maybe it’s a lifelong journey for me, meeting with Cal State San Marcos to help them get it right,” Ecke said. “There’s a bunch of stuff around North County with the Ecke name on it, but as people age, as people die, as new people come to town, the memory of our family is going to keep fading. I think they did some extraordinary things in their time, and I’m really excited that, because of this collection, if you want to know who they were, you can find out.”

Did you live, work or attend school in North County between 1968-2001? The Escondido Historical Society (EHS) and the Cal State San Marcos University Library seek volunteers for a community project …
Read more

As a young girl, Marilyn (Finley) Huerta remembers seeing combat boots lined up by the front door in her house. She came to realize that, when the boots were missing, it meant her father was …
Read more

Efforts to ban books deemed controversial in some way are essentially as old as literature itself.Authors whose work has been banned across history include such literary icons as Mark Twain, Harriet …
Read more
NewsCenter