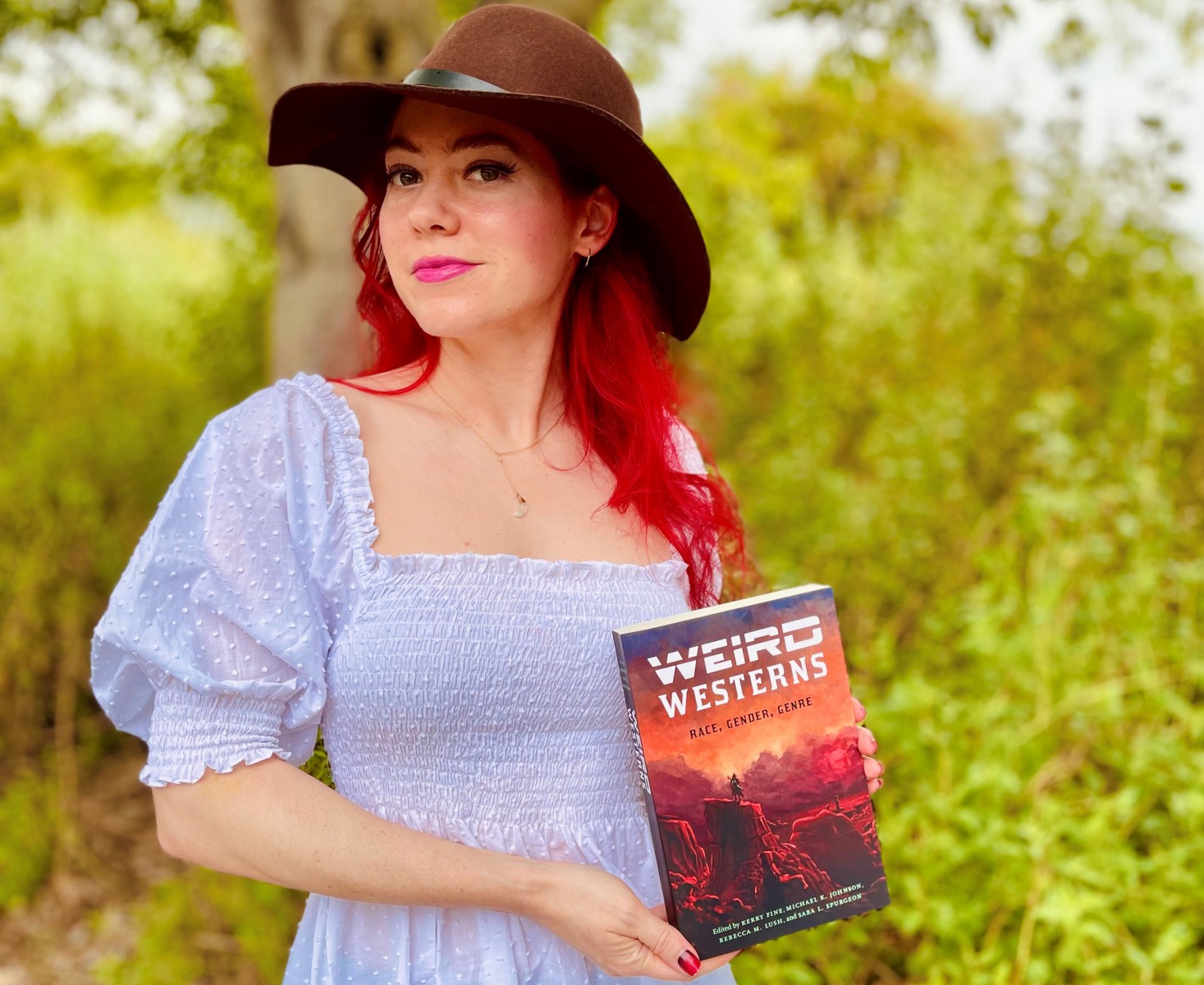 Literature and writing studies professor Rebecca Lush co-edited a book that has been nominated for a prestigious science fiction award.

Rebecca Lush can thank pure happenstance for the latest honor of her scholarly career.

As a longtime professor of literature and writing studies at Cal State San Marcos, Lush is a member of the Western Literature Association and a past president of the organization. During the WLA’s annual conference in 2015 in Reno, Nev., she engaged in the standard hallway conversations with many colleagues from other universities, and in the process discovered that a few of them share her fascination with an increasingly popular sub-genre known as the weird Western.

They agreed that it would make a ripe subject for a book, and over the next few years Lush and her co-editors collaborated on what became “Weird Westerns: Race, Gender, Genre,” an essay collection that was published last summer by University of Nebraska Press.

Now, nearly a year after the book’s publication, Lush has an opportunity for an even bigger prize. “Weird Westerns” has been nominated for the Locus Awards as one of 10 finalists in the category of best nonfiction work. The Locus Awards are among the most prestigious in the area of science fiction writing, recognizing everything from bestselling authors to academic texts. They are presented by the Locus Science Fiction Foundation, which produces Locus: The Magazine of The Science Fiction & Fantasy Field.

Lush will find out if her book won on June 26 during a virtual Locus Awards event, but she already feels like a winner.

“The nomination was really exciting and unexpected news,” said Lush, who’s also the chair of the Department of Literature and Writing Studies. “Nominees are determined by readers of science fiction, so it means that the book is reaching a larger audience outside of academia. That’s always great when you know that the scholarship you produced is reaching a wider community.”

A weird Western is a hybrid genre that fuses the traditional notion of the Western – think John Wayne and Clint Eastwood – with speculative fiction, an umbrella term that encompasses science fiction, fantasy or supernatural horror. Recent examples of weird Westerns that have gained currency in popular culture include the HBO series “Westworld” and the Disney Plus show “The Mandalorian.”

In her book, Lush and her co-editors – Kerry Fine, Michael Johnson and Sara Spurgeon – compile essays that analyze a wide range of texts, films and TV series, exploring how they “challenge conventional representations by destabilizing or subverting the centrality of the heterosexual, white, male hero but also often surprisingly reinforce existing paradigms in their inability to imagine an existence outside of colonial frameworks.”

Lush’s contribution to the book is based in part on research that she presented at CSUSM’s faculty colloquium, hosted by the Faculty Center, in fall 2016 by way of a lecture titled “Dangerous Liaisons: Romances Past and Present and the Myth of America.” Her book chapter also incorporates material from one of her upper-division courses, LTWR 334A: The Western, which Lush gradually has adapted from its foundation in early American literature and settler colonial studies to include more “weird” elements, as a means of making the teaching fresher and more relevant to the lives and experiences of her students.

“Bringing in the weird Western was a way for me to show my students an up-to-date approach of, ‘Why does it matter to study these past texts?’ ” Lush said. “Well, partly because they inform the media that students consume now. So to understand a popular weird Western like ‘Firefly’ or ‘Westworld,’ you have to understand a little bit about that literary past.

“The history of the genre of the Western is a very complicated one, and there are erasures. The volume that we published is really looking at how the weird Western can address significant erasures like roles for women, roles for people of color. And it was also a way to make sure that students are getting a holistic view of how communities get represented and written into, or written out of, different literary histories.”

Lush and her co-editors had such a good experience collaborating on the first book that they’re now hard at work on a sequel. The tentative title for Volume 2 is “Hell Bent for Leather: Sex and Sexuality in the Weird Western,” and this summer the group will be evaluating proposals and draft manuscripts.

“We're excited to continue this work,” Lush said. “I think there's a bigger conversation about weird Westerns out there that people want to have, and we're happy to help facilitate that. I hope that people find the work useful as a way to make conversations relevant around social justice issues in literature.”

Land acknowledgements have become increasingly common at institutions around the country. They are formal statements that recognize Indigenous peoples as traditional stewards of the land and respect …
Read more
NewsCenter