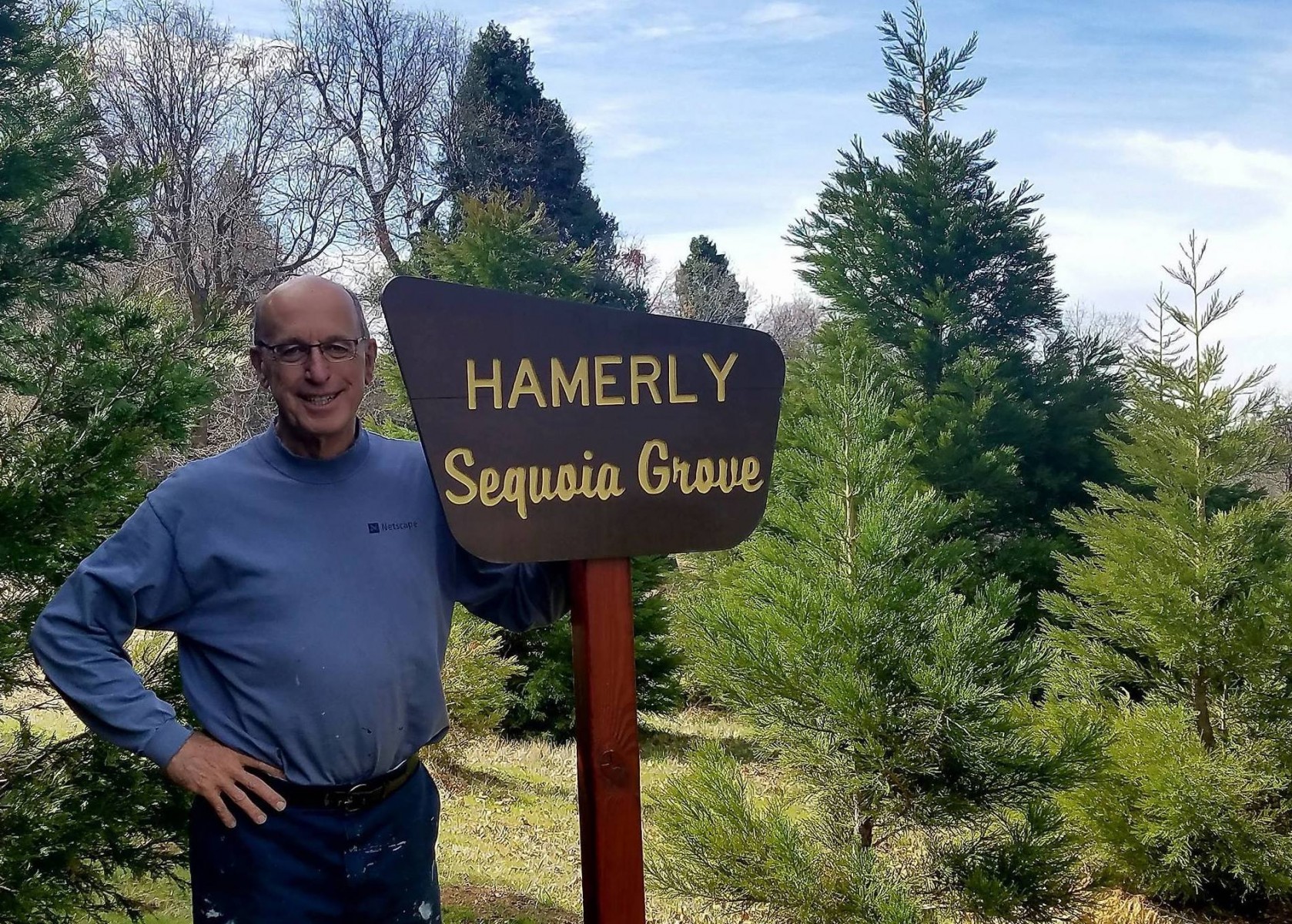 Jim Hamerly
CSUSM dean of the College of Business Administration grows sequoias on his property on Palomar Mountain.

Jim Hamerly thought the first time he retired from Cal State San Marcos would be the last.

Hamerly was the director of business community relations, responsible for leading the College of Business Administration’s Senior Experience program, for nearly seven years when he decided to retire in 2013 to spend time working with alumni start-up businesses.

It turned out to be a short-lived departure. About a year later, Hamerly was coaxed out of retirement to serve as CoBA’s interim dean.

“When they initially asked me, I think I turned down the provost three times,” Hamerly said.

Encouragement from Ron Gerevas, a member of the CSUSM Foundation Board and the CoBA Advisory Board, helped change Hamerly’s mind. And it wasn’t long before that interim title was removed for a more permanent one.

“I fell in love with the place again,” Hamerly said.

After nearly seven years as dean, Hamerly has decided it’s time to retire from CSUSM for a second time. He will step down at the end of June, with longtime professor of management and entrepreneurship Bennett Cherry stepping into the role of interim dean beginning July 1.

“We have great faculty and staff, and the best thing you can leave on is full confidence that they will carry the college strongly forward,” Hamerly said.

Hamerly has always had a wide array of interests, which kept him moving throughout his career. A glance at his résumé shows that he rarely remains in a position more than five years. Notably, both of his CSUSM stints lasted longer than that.

But Hamerly said the time was right this time around because the college achieved two important goals:

Cherry, who has been at CSUSM since 2000, can attest to the importance of both of those achievements.

“Jim’s leadership as dean came at a critical time in the life of our College of Business Administration. For decades, the college had been discussing and taking small steps toward AACSB accreditation, but Jim and Mohammad really launched us into a coordinated and strategic multiyear plan to actually achieve it,” said Cherry, also noting the vital contributions of associate dean Mohammad Oskoorouchi. “It is one of Jim’s greatest achievements as dean.

“For many staff and faculty, Jim’s focus on improving the culture of CoBA will be regarded as one of the most significant touchstones of his legacy.”

CoBA received word of its AACSB accreditation in April, putting the college among the top 5% of business schools in the world.

“The AACSB accreditation team commended us for three or four major areas where we were out in front,” Hamerly said. “These are deans who come in to evaluate us and said, ‘Not only are you guys doing a great job, we're going to copy what you're doing.’ So that's an affirmation that we're on the right path.”

Changing the culture in CoBA was something that Hamerly knew was necessary when he accepted the position as interim dean. It’s something he has done at every company he has run or started. It’s never a quick fix, but it’s one he knew was necessary to put the college on a strong path forward.

CoBA has implemented training on communication and behavioral styles while utilizing tools such as CliftonStrengths assessments and 360-degree reviews, among others, to improve collegiality throughout the college.

“The cooperation among faculty, between faculty and staff, and our community engagement is amazing,” Hamerly said. “It's astounding to see how our team comes together and how they help each other out. It's an awesome environment to work in.”

Hamerly also is proud of CoBA’s focus on student personal and professional success. He noted that the college has recruited more than three dozen professionals who volunteer as Executives in Residence, helping to guide students through the Business Professional Development program and develop the professional skills they’ll need in their careers. That external community engagement has been a boon to the college and its students.

And though Hamerly is retiring as dean, he will be staying busy. He serves on advisory boards of four alumni startups and he has dozens of hobbies, including participating in triathlons, hiking and growing the largest sequoia grove in Southern California.

As Hamerly prepares for the next chapter, he does so knowing that CoBA is in position to continue to thrive.

“We have people who know how to do it and they're good at it,” Hamerly said. “They might need me as a cheerleader, but I've contributed the best of what I can and they're ready to move forward, which is great.”