Cesar and Lois
The coveted Lumen Prize was awarded in London in September to Degenerative Cultures in the category of Artificial Intelligence. The project was a collaboration by Cesar and Lois, an art collective that includes CSUSM professor Lucy HG Solomon.

Sometimes the stars align and you find yourself in the place you’re supposed to be. Sometimes moments may seem insignificant at the time, but you realize later those moments remarkably shaped your future. For what are moments if not miniature tapestries that reveal our paths?

Lucy HG Solomon sat in a conference room at Cal State San Marcos a few years ago. She was here for a job interview for an assistant professor of media design in CSUSM’s School of Arts.

Solomon has an MFA in Art from Claremont Graduate University, she has won awards from organizations that shape the world in positive ways, she has collaborated with NASA, and her interdisciplinary art has been displayed all over the world.

She was a perfect fit for a position at CSUSM. But something else unique happened that day. It was something that struck Solomon as extraordinarily different. And when she realized what it was, she knew where she wanted to be.

“I got a sense of what they were looking for because the call for the professor was so wide open,” she said of the CSUSM interview panel. “And I didn’t edit. I had all of these weird interlocking but somewhat different facets that I put out there about my experience and my interests. And instead of thinking, ‘Oh she’s too interested in too many things,’ I got the sense that my unusual combination of interests was right up their alley. And I felt that from the very beginning. I felt that this is the place where I belonged.”

Three short years later, Solomon has brought worldwide attention to CSUSM when a renowned prize in digital art was award to Cesar and Lois, her collective with Brazilian collaborator Cesar Baio for their project Degenerative Cultures. The coveted Lumen Prize was awarded in London in September to Degenerative Cultures in the category of Artificial Intelligence. 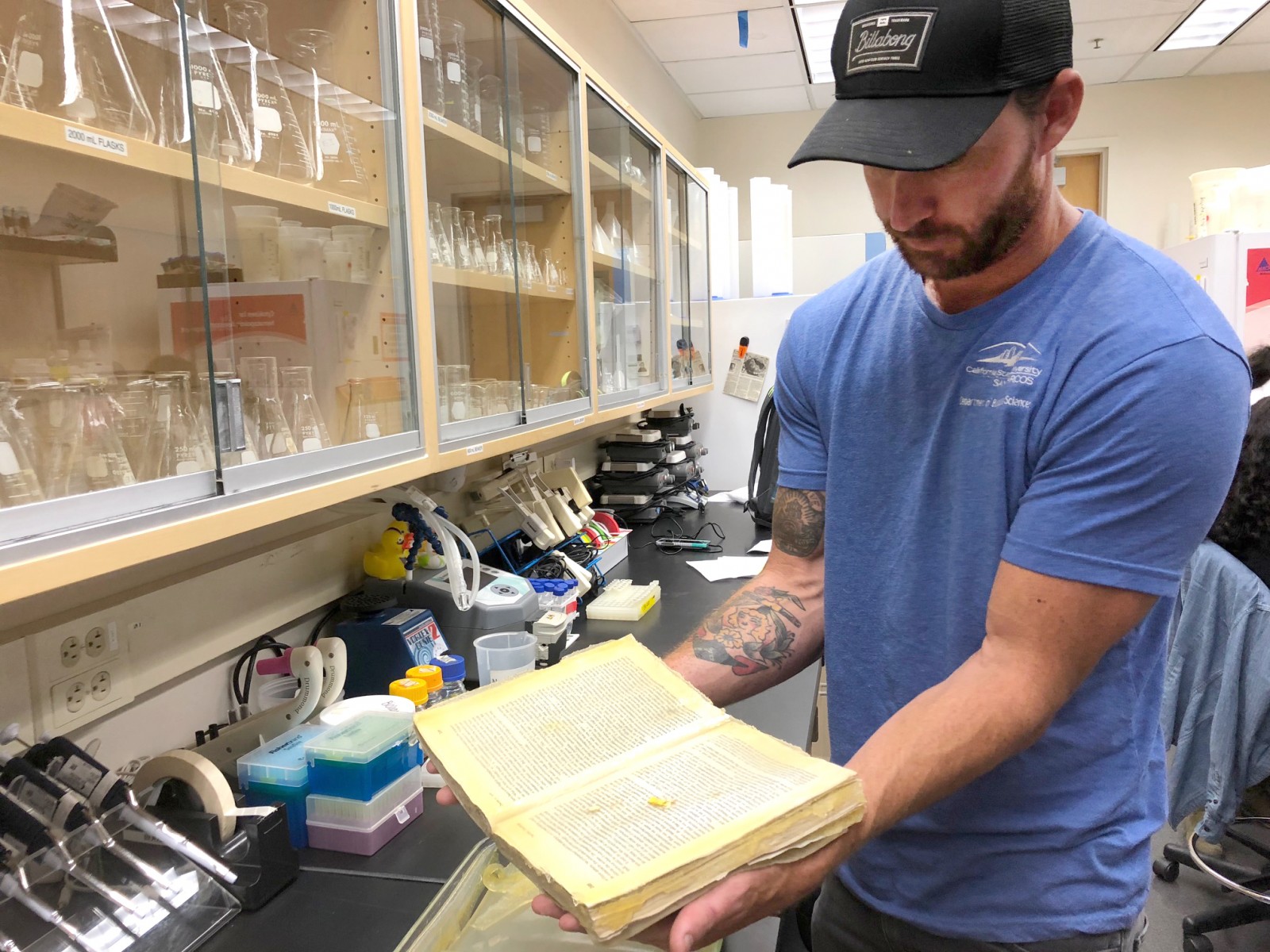 Scott Morgans
The coveted Lumen Prize was awarded in London in September to Degenerative Cultures in the category of Artificial Intelligence. The project was a collaboration by Cesar and Lois, an art collective that includes CSUSM professor Lucy HG Solomon. CSUSM Biological Sciences Instructional Support Technician Scott Morgans also participated in the project.

The project originated over conversations between the pair more than a year ago. They started thinking about words as ingredients and wondered how they could expand their collaborative group even further.

They brought in Jeremy Speed Schwartz, who is an associate professor of Digital Media and Animation at SUNY Alfred. At the suggestion of Betsy Read, professor of biological sciences at CSUSM, they also brought in CSUSM Biological Sciences Instructional Support Technician Scott Morgans.

Read suggested that the artists work with a fast-growing fungus called Physarum polycephalum, commonly referred to as slime mold. They then grew the slime mold on books and watched as it overtook the books, “reading” words as it grew. The books’ themes centered around humanity’s inclination to control nature.

“Lucy suggested utilizing and growing Physarum polycephalum in ways that I never would have,” Morgans said.

A twitter feed (@HelloFungus) was created next, which was then analyzed by CSUSM students in associate professor Sandra Doller’s literature and writing workshops.

“I teach my writing students that creative practices have many generative overlaps,” Doller said. “But this was the first time that they workshopped the textual output of a fungus!”

This was the first time the Lumen Prize was given to a project with a living entity, a groundbreaking moment in the world of art/science collaboration.

“I know that we should not think that art will change the world,” Baio said. “But perhaps we can think of art as providing a space for change, harnessing the imagination to envision what the world should be. If art is a place for picturing utopias, Degenerative Cultures invites us to spread the spores of a future in that we have more equalitarian relationship with non-human being and systems.”

Unlike at some universities, at CSUSM, projects of this magnitude also value the contributions of undergraduate students.

Kodie Gerritsen is an undergraduate researcher in Art, Media and Design. She got to see firsthand the growth of this project from beginning to its current state as an active project.

“My involvement in this project was an unexpected journey into the world of slime mold experimentation,” Gerritsen said. “Caring for those slimy yellow organisms was a wonderful experience and has certainly shed new light on my conception of what art can be — living, animate, eukaryotic, and just a little gross.” 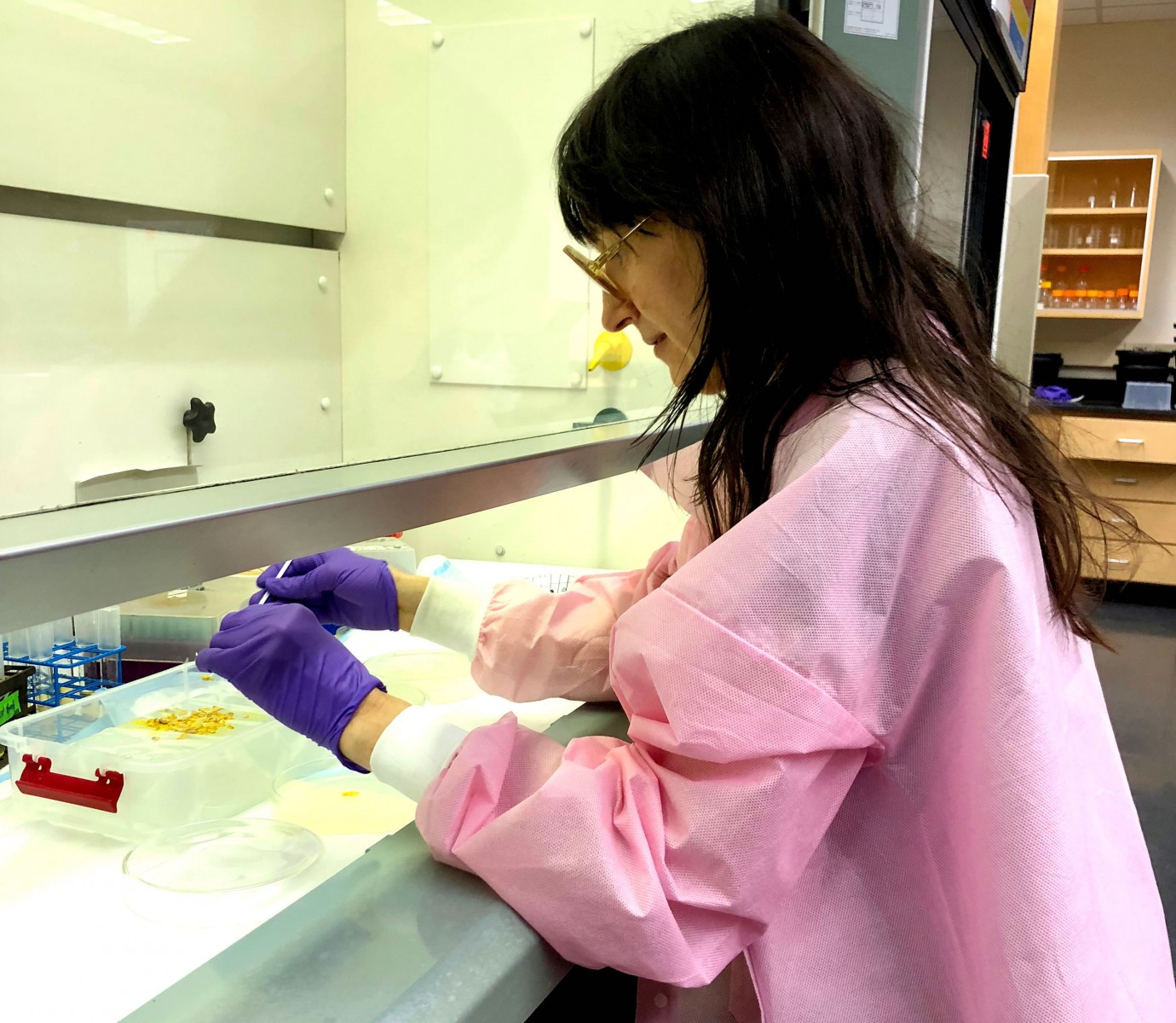 Lucy HG Solomon
The coveted Lumen Prize was awarded in London in September to Degenerative Cultures in the category of Artificial Intelligence. The project was a collaboration by Cesar and Lois, an art collective that includes CSUSM professor Lucy HG Solomon.

Solomon’s uncommon history of bridging art and science led her to develop a collective called The League of Imaginary Scientists. Culturally significant projects like that don’t happen if Solomon doesn’t have the freedom to explore and create. And projects that could have a lasting effect on changing the world don’t come without the help of others.

“I was surprised when I came to Cal State San Marcos to find a community of interdisciplinary scholars who really celebrate that,” she said. “That is oftentimes advocated but not practiced. I found that within every department and every person I spoke to, there was some crossover of other studies or general collaboration with people across disciplines.”

Said CSUSM Art, Media and Design professor Kristine Diekman: “In our department we are all concerned and aware of environmental impacts. Our artwork reflects the range of those concerns and engages with how to solve problems we encounter. These range from responsive sculptural installations to creative research with scientists to community collaborations.”

Another champion of combining art and science, professor Judit Hersko, chair of Art, Media and Design, addresses ocean acidification and climate change in her art. CSUSM colleagues from across the university have convinced Solomon she could truly take risks in her approach at CSUSM. To teach and inspire by creating something that will leave an indelible mark on the world.