Professor Writes Book Based on Time with LGBTQ Youth 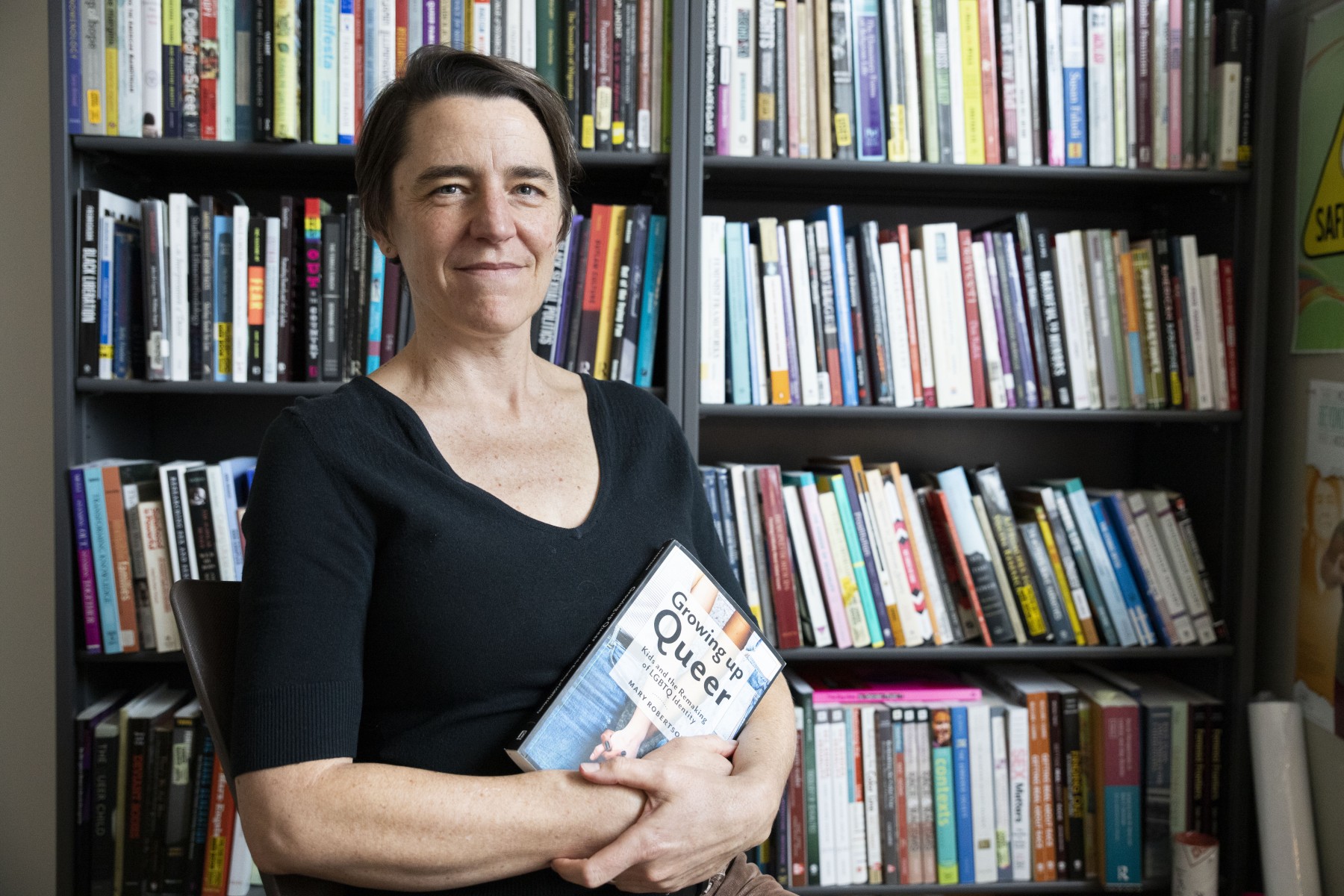 For Mary Robertson, it felt like the first day at a new school.

Her heart was pounding. She was racked with self-doubt. Would the kids like her? Would she fit in?

It was the fall of 2010, and Robertson was standing outside an LGBTQ youth drop-in center somewhere in the Rocky Mountain West (she’s not able to be more specific because of privacy issues). A graduate student pursuing a Ph.D. in sociology at the University of Colorado, she was about to embark on a long period of research on LGBTQ youth for her dissertation.

And she was scared stiff.

“I remember it being so awkward and feeling so uncomfortable and having to get outside my comfort zone and be vulnerable,” Robertson said.

Over the next three years, starting as an adult volunteer before her research began in earnest, Robertson spent hundreds of hours at the center. She observed, she developed relationships, she interviewed more than 30 LGBTQ youth in depth.

Now an assistant professor of sociology at Cal State San Marcos, Robertson has transformed the material that became her dissertation into her first book. Released last November, “Growing Up Queer: Kids and the Remaking of LGBTQ Identity” is based on those three years of ethnographic research and explores the changing ways that young people are now becoming LGBTQ-identified in the United States.

“The book is still academic like a dissertation, but there’s a process of transforming it into something that’s more readable,” Robertson said. “My primary audience is undergraduate and graduate students, the idea being that it’s usable as a classroom tool. So it’s about making it sociological but also accessible to a non-expert audience.”

The biggest challenge in adapting her dissertation, Robertson said, was taking a series of “choppy” concepts and turning them into a cohesive story with a central theme. What she settled on was the notion that, although mainstream society tends to think of LGBTQ people as one large, homogenous group, not all LGBTQ youth are the same, and that “queer” as a descriptor doesn’t refer just to sexuality and gender, but also to other characteristics that veer from the so-called normal.

The youth of the drop-in center, Robertson writes in the book’s introduction, “are not like the television cast of ‘Glee,’ a group of pitch-perfect, attractive, happy theater geeks. The youth are more likely to refer to themselves as ‘Little Monsters,’ a term of endearment coined by the mega pop star Lady Gaga to refer to her queer fans. One’s access to ‘normal’ depends on race, class, ability, citizenship, language, geography, education, skills and more.”

“I’m really trying to complicate the idea of what an LGBTQ youth looks like,” Robertson said. “It’s important for us to keep distinguishing among young people to say what results in young people being marginalized. It’s not simply being gay because there are a lot of gay kids who are doing just fine.”

Robertson is quick to point out in the book that her identity as a straight person – she has a longtime male partner who lives in Seattle – contributed to her initial discomfort at the center and makes it harder to write about LGBTQ issues.

“Since the day I started to this very moment, there’s always tension for me about what it means to be a straight, cisgender person talking about LGBTQ people,” she said. “But I also write about my own experiences with queerness. For example, being in our mid-40s and in a long-term relationship and not having kids makes you queer.”

Robertson was born and raised in Denver. After earning an associate degree, she spent most of her 20s working in concert promotion, handling day-to-day operations for small music venues. Frustrated by the sexism she experienced in the industry, she decided to go back to school and got a bachelor’s in women’s studies at Metropolitan State University of Denver, a college that she compares to CSUSM for its wealth of diversity and nontraditional students.

Having found her niche in academia – “I’m a philosopher at heart,” she said – Robertson went on to earn her doctorate from the University of Colorado in 2014 and was hired by CSUSM later that year. She said the opening at the university was the ideal fit for her field of expertise and that she feels supported here despite working in a discipline that tends to be controversial.

“It’s a risky area to teach and do research in, and in the interview process, I asked a lot of questions about that,” Robertson said. “Since I’ve gotten here, I’ve definitely seen an increase in hires of people doing sexuality research. I’d love to see more. It’s important to know you’re supported and safe in doing that kind of work.” 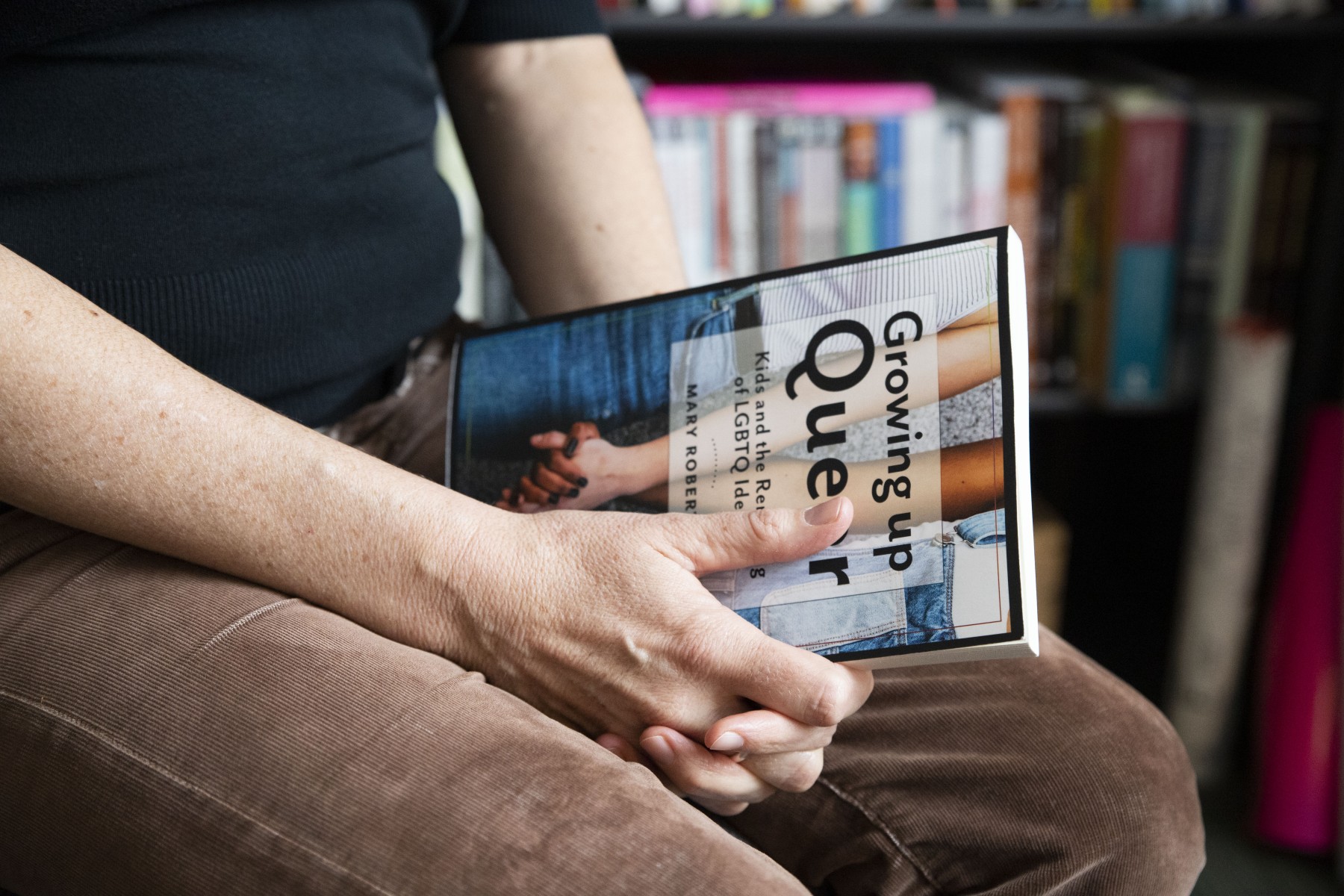 Mary Robertson
The assistant sociology professor envisions her book being used as a classroom tool by undergraduate and graduate students. Photo by Andrew Reed

Professor Writes Book Based on Time with LGBTQ Youth