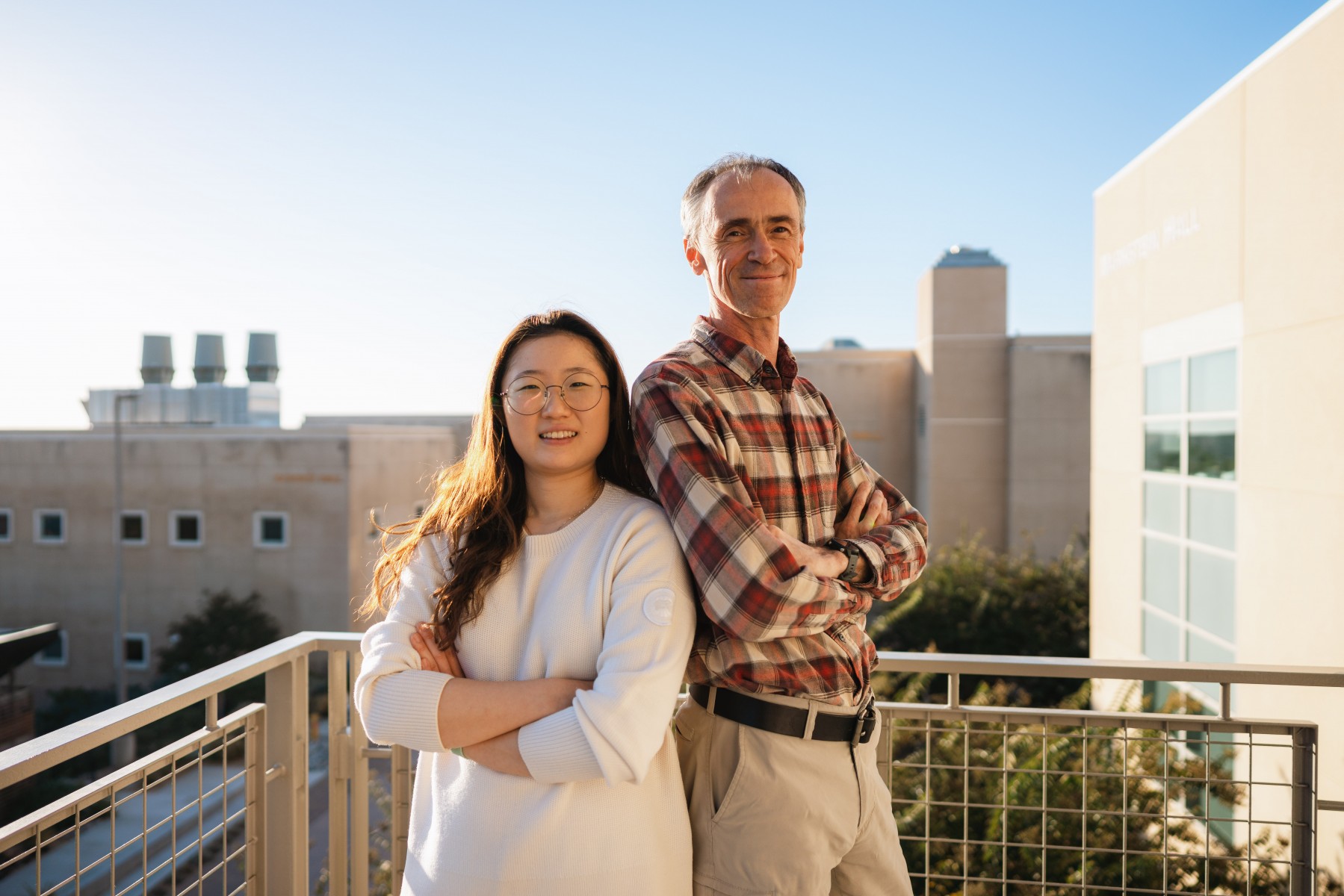 Master's student Michelle Kang and mathematics professor Andre Kündgen recently wrote a paper that they submitted to the Journal of Graph Theory. Photo by Long Truong

Having grown up in Korea, Michelle Kang set out to make the most of her college experience upon her arrival at Cal State San Marcos.

She began as a kinesiology major, hoping to work as a trainer or physical education teacher.

She got involved on campus, working for three years as part of the university’s Outdoor Adventures team. Her love of sustainability led her to earn a grant from the ASI Sustainability Project Fund that helped the group achieve its campus-wide sustainability goals such as zero waste.

Math was the furthest thing from her mind.

Until she took a pre-calculus course taught by Andre Kündgen, where her career path took a monumental detour.

“I had to take it as a requirement of my degree,” Kang said. “And at that time, since I wasn't really good at math, it was easily my least favorite subject up through high school. And then I take his class, and I start liking math. I feel like the reason why was that he didn't really force people to memorize formulas or equations or things like that. But he tried to explain why and how things work. And I think that part really made me started liking math.”

Kang eventually switched majors to mathematics, and now she has teamed with Kündgen again as the duo recently wrote a paper that they submitted to the Journal of Graph Theory.

The paper, which looks at graphs with a certain property or structure and attempts to find the minimum or maximum size and everything in between, is currently under review by the journal. Hopes are high in the math department that the paper will be published.

“The best way to describe the problem is that in highly connected systems interesting substructures emerge,” Kündgen said. “This paper considers the question of what the number of connections present can tell us about the nature of the cycles in the network. Specifically, we completely settle this question for the pentagon, and we also have some results for other cycles.”

Like any good teacher, Kündgen challenges his math students in various ways.

He gives students projects such as producing a paper not with the goal of getting it published necessarily, but instead with the intent to enjoy and learn from the process itself.

Kang isn’t shy about admitting her interest was piqued in that first course with Kündgen.

“Whether she found her passion there is for her to say, but it is true that I was her first math professor at CSUSM,” Kündgen said. “She was a quiet student then, but what struck me was that the questions she asked were at a deeper level than you usually get in that class, and her answers on the exams showed more mathematical maturity and deeper interest and understanding than you would expect as well. At the end of the semester I told her, ‘I think you are good at this, why don’t you try out calculus next semester?’ So she did and she was fortunate in that the next semester another tenure track faculty member, Dr. Amber Puha, was teaching that class and she saw the same potential in Michelle that I did. The reason I say fortunate is that we rarely have tenure track faculty teaching these classes, because we are spread so thin.”

After that first class with Kündgen and after several more math classes, Kang took an independent research course in her final undergrad semester.

On day one, she set out immediately to work on the graph subject.

The process – both challenging and thought-provoking – drove Kang to heights she never thought possible within herself in a subject like math.

The result was looking not at a trigger graph or something linear, but instead they looked more at the set of vertices and edges in shapes like a pentagon or a star shape. They were able to give all the ranges of edges given a number of vertices.

“I was really excited to wake up in the morning and look at the problem and just think of new ways to approach the problem,” said Kang, who is now a master’s candidate student and a teaching associate for the department. “And Dr. Kündgen told me that he also had lots of fun working with the problem. So I think it was not the end-all at least for me to be able to publish in one of those journals, but I think it just paid off for me to enjoy the process. And having fun with the problem and I think a little bit of luck. We just have a good end result as well.”

Those conversations turned her curiosity to not only push the graph subject matter beyond her original theories, but also showed her two main things: maybe she actually could develop a passion for math, and maybe she could envision a future as a mathematician.

Her inquiries about how and why things happen turned into a paper collaboration between professor and undergraduate student – a relative rarity.

“I think very highly of our students in general,” said Kündgen, who also brought in mathematician Ron Gould to assist on the project. “They have so much going on in their lives and yet many of them are thoughtful and engaged. Research in mathematics can be challenging, and prior to the summer scholars program in CSTEM, we didn’t have very much undergraduate research in mathematics. Michelle took advantage of this program and did a project with Dr. Puha one summer. Another wonderful opportunity is our annual Reid lecture, which is supported by former Library Dean Marion Reid and founding math faculty K. Brooks Reid. This lecture has brought many excellent mathematicians to campus and given our students the opportunity to interact with them.”

It also turned into Kang’s quest toward a potential career in math.

It wasn’t just Kündgen’s ease of sharing knowledge. In fact, it was mostly the sheer joy he showed in sharing that knowledge.

“He was always so happy to answer those questions,” Kang said. “And I can just see that he's generally really happy doing that. That was interesting for me. So if he really enjoys this job and he's something like a senior mathematician and he can still have fun with the subjects that he's doing, that part also kind of fooled me into math. And he suggested to me, too, I’m going to be a good math major. And I honestly didn't believe at first, but I started liking it.”

So she started taking core math classes like calculus and some proof-based classes. She switched her major and graduated with a math degree last spring. She began the master’s program in math this semester and plans to pursue a Ph.D. program and eventually work in academia.

If Kang eventually teaches, she will do so having been inspired by her surroundings at CSUSM.

Not only have her professors shared their subject knowledge, but they’ve shown her the importance of making lasting relationships in your environment.

“I really like that close connection between instructor and student in our school,” Kang said. “And looking at my professors like Dr. Kündgen and some other professors that I did work on other research programs with. The fact that they really enjoy that and they really enjoy teaching really motivated me. If I can enjoy math for the rest of my life, I think I will just be really happy.

“And just by looking at how happy they are to be in classrooms and to connect with their students, that just inspires me. If I can do that, that would be really great.”