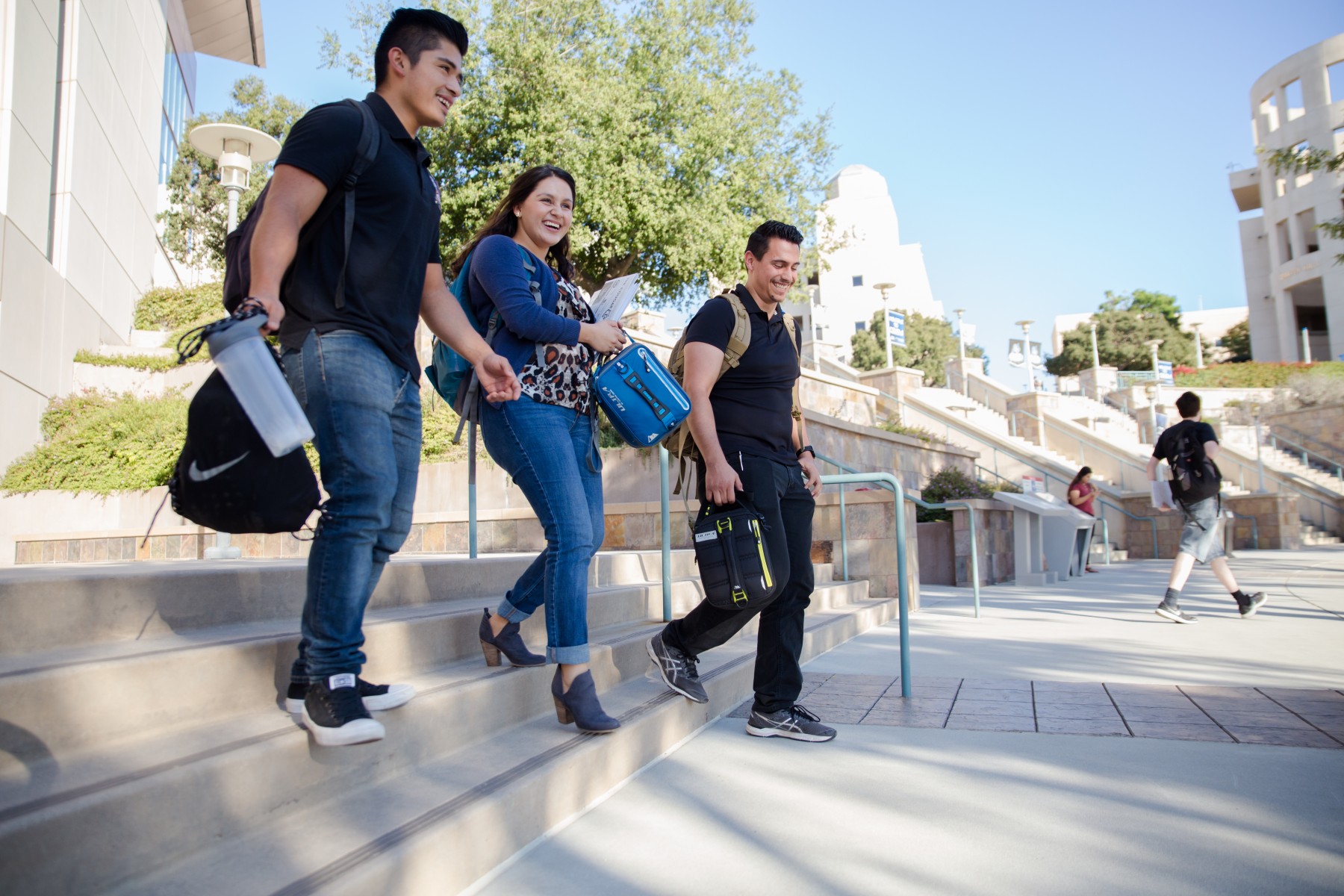 Ronald E. McNair Postbaccalaureate Achievement Program
CSUSM students Ariel Lopez (left), Erika Martinez (center) and Raul Diaz each plan to pursue graduate studies after earning their bachelor's. All three are members of the TRIO Student Support Services program. First-generation students like Ariel, Erika and Raul from underrepresented communities who are interested in pursuing graduate work will soon have numerous support services to help them reach their goal, thanks to a federal grant of more than $1 million awarded to CSUSM. Photo by Christine Vaughan

First-generation college students at Cal State San Marcos from underrepresented communities who are interested in pursuing graduate work will soon have numerous support services to help them reach their goal, thanks to a federal grant of more than $1 million.

The Department of Education grant, the Ronald E. McNair Postbaccalaureate Achievement Program is named after the late physicist and astronaut Ronald Erwin McNair, who died during the Challenger Space Shuttle explosion on Jan. 28, 1986. Grants are awarded to colleges and universities to prepare undergraduates from low-income, first-generation, or other underrepresented communities for graduate school regardless of their field of study.

“The McNair program really represents what we are about at Cal State San Marcos,” said Denise Garcia, associate dean for the College of Education, Health and Human Services and professor of biological sciences who is serving as the grant’s principal investigator. “We want our graduates to reflect the diversity of our region, and we hope that for some students, this program will open up avenues and opportunities that they previously thought were impossible to attain and enable them to dream big.”

The Ronald E. McNair Postbaccalaureate Achievement Program at CSUSM launches Oct. 1. Garcia will now turn her attention to hiring a program coordinator and others to staff the effort.

Twenty-five juniors and seniors will take part in a two-year program that includes an intensive Summer Research Training Program, which also incorporates year-round coaching to ensure students graduate and have the opportunity to go to graduate school. Other highlights include a McNair Scholars Learning Community course over four semesters, which involves mentoring, academic advising and graduate school application assistance.

More importantly, the entire campus community came together to support this grant and its commitment to diversity and inclusion, which embodies the mission of CSUSM. Seven CSUSM deans contributed to this grant in many ways and without them, this grant would not have been successful. For instance, Dean of Extended Learning Mike Schroder generously donated a scholarship so that the students would not have to pay tuition for their summer research experience and still earn academic credit. The academic deans also gave support in the form of release time so that the grant could be administrated without cost to the granting agency, allowing more funds to be directed to the students.

CSUSM's TRIO Student Support Services, which is directed by Heather Northway, is also part of the program.

The grant will be administrated by CSUSM’s Office of Undergraduate Studies led by Dean Dawn Formo. OUGS was established three years ago as the central hub on the CSUSM campus for fostering and enhancing the academic success and engagement of undergraduate students through various partnerships and collaborations.

“McNair is a widely known program at universities across the United States, and we’re excited to build opportunities for students who are interested in pursuing postgraduate work,” said Suzanne Hizer, a grant co-writer and director of supplemental instruction and STEM tutoring in the Office of Undergraduate Studies.

Hizer was a first-generation, low-income college student who earned her bachelor’s and master’s degrees from CSUSM and her Ed.D. in educational leadership from the Joint Doctoral Program between UC San Diego and CSUSM.

“What really impacted me was the role of mentors, which will be a major element of this program,” Hizer said.

The McNair program comes on the heels of CSUSM securing a five-year, $1 million grant from the National Science Foundation for scholarships, workshops, mentors and an abundance of networking opportunities to boost academic success and job readiness of computer science majors from low-income families.