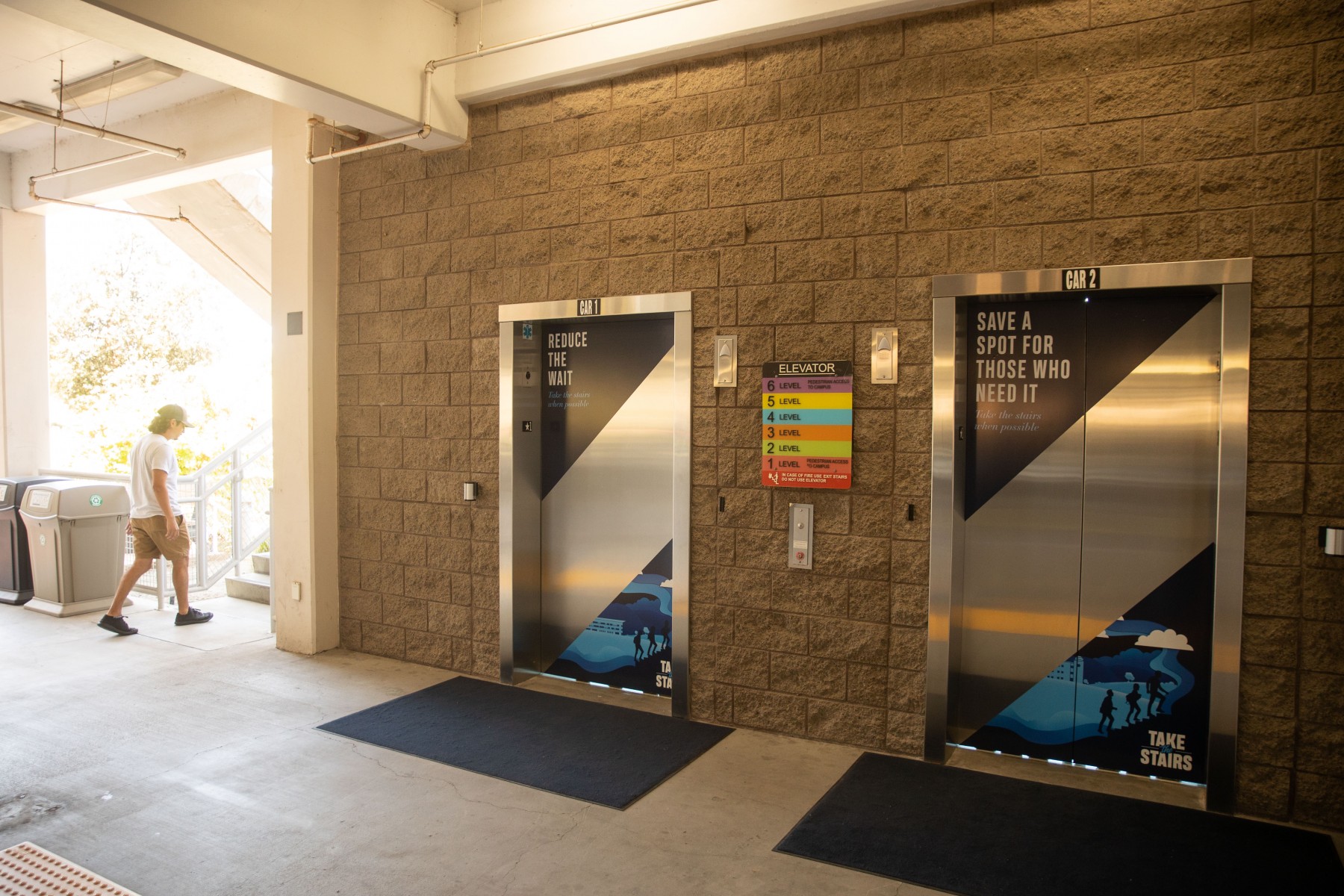 A "Take the Stairs" campaign, which has been in the works for almost a year, is being unveiled as CSUSM employees return to campus en masse in early August.

When Cal State San Marcos was taking small, tentative steps toward repopulating campus on a limited basis last fall, it faced a problem: Social distancing is really hard to manage on an elevator.

In concert with state and local public health officials, CSUSM Safety, Health and Sustainability leaders determined that, because of the COVID-19 pandemic, each elevator ride would be restricted to one person or one household.

Along the way, though, they began to think about the issue more deeply. What if reducing elevator use, and encouraging using the stairs, could become a permanent attitude, woven into the culture of campus?

That was the impetus for the Take the Stairs campaign, which has been in the works for almost a year and is being unveiled as CSUSM employees return to campus en masse in early August.

The primary visible manifestation of the campaign is 99 wrapped elevators that feature large, triangle-shaped banners – in Cougar blue, of course – positioned on the upper left and lower right of the doors. Installed in late July, the upper-left banners feature five slogans that vary depending on the elevator door you’re in front of:

The text below the slogans is the same on all the banners: “Take the Stairs When Possible.”

The campaign has been led by Juliana Goodlaw-Morris, CSUSM sustainability manager, who received input and consultation from more than a dozen departments across campus, including Mary Stephens, who was interim vice president of Finance and Administrative Services at the time and with the approval of President Ellen Neufeldt and her team of administrative leaders. Funding came from money allotted to CSUSM through the CARES Act passed by Congress last year.

As the threat of COVID-19 has receded, especially locally given the high rate of vaccinations in San Diego County, the focus of the Take the Stairs campaign has shifted from safety to three different, but no less worthy, goals. The first is the conservation of energy.

“Elevators use a decent amount of energy. In fact, all of our elevators together use the same amount of energy as 25-30 homes in a year,” Goodlaw-Morris said. “Taking the stairs can help us reduce our energy usage on campus, assisting CSUSM in reaching our net zero energy goal. Even small behavior changes make a difference. If we’re all doing it daily, then we’re going to be conserving our resources. My belief is small steps make a difference. Taking the stairs, using a reusable water bottle, using alternative transportation, all of these small daily actions can help CSUSM reach our sustainability goals.”

The second goal is to save the elevator for when it’s needed.

“We want to make sure that the elevators are accessible for those who need it the most, those not able to take the stairs for one reason or another,” Goodlaw-Morris said. “Also, the more our elevators are used, the more likely they are to break. Out-of-service elevators can be an issue for folks who are unable to take the stairs. At the heart of this campaign is accessibility and inclusion.”

Notably, the Take the Stairs campaign was shaped in part by Disability Support Services at CSUSM.

“It is important to keep in mind the benefits this initiative will bring to those with mobility challenges,” said John Segoria, director of DSS. “From an accessibility perspective, as the number of people on campus using the stairs increases, there will be greater access to the elevators for those who need them.”

The campaign’s third goal is to promote the benefits of health and wellness. With the university’s well-earned reputation as Cal State Stair Master, small changes like eschewing the elevator for the steps can improve physical health.

“As a student, taking the stairs all the time can be a challenge, but I know that it’s important from a sustainability lens, which incorporates energy savings and health and wellness,” said Daniela Loera, president of the Environmental Stewards Association, a student organization. “I think this is a really cool idea and hope students begin to think about how they can conserve resources in other parts of their life as well.”

Leon Wyden said he’s excited for the Take the Stairs campaign, which is launching about two months after he started in his new job as vice president of Finance and Administrative Services.

“Although this campaign was being developed during the pandemic, it is applicable now and into the future,” Wyden said. “I think it’s a great initiative that combines inclusion and accessibility with wellness and resource conservation.”

Goodlaw-Morris said she strives to take the stairs as much as possible, but admits that she sometimes falls short of her best intentions.

“There are times that I personally don't take the stairs," she said. "It might be in the morning when I am carrying my bags and water and tea to my office, or if I am just super tired. My personal goal upon returning to campus is to try to take the stairs daily while on campus. In the beginning, it might just be one or two flights of stairs, but I plan on using the stairs as part of my exercise.

For assistance on how to move around campus, consult this interactive campus map that includes accessibility offerings. Any questions about the Take the Stairs campaign can be directed to shs@csusm.edu.