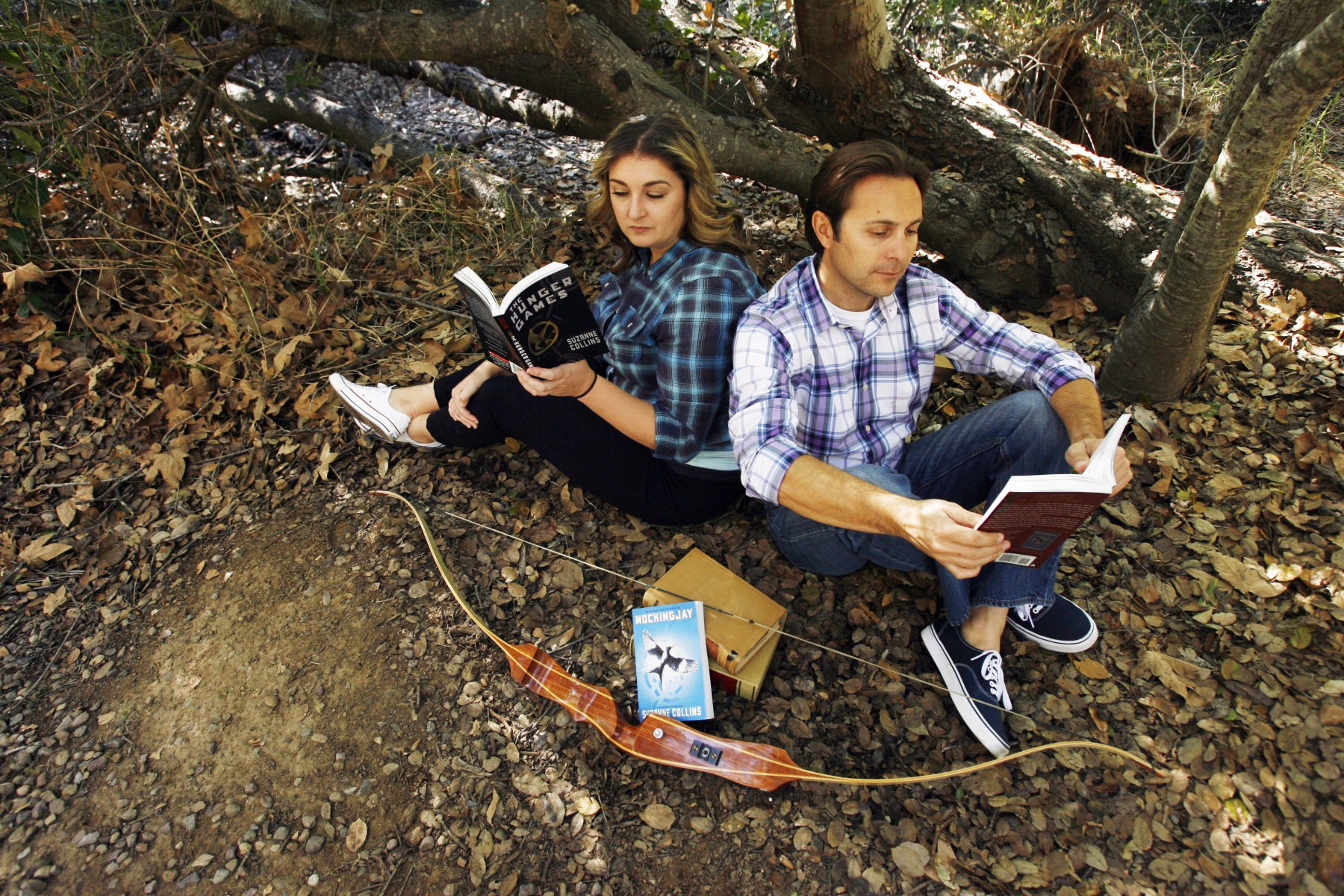 Cal State San Marcos junior Chad Williams was enjoying his summer off from school when he got an unexpected call from Professor of Folklore and Cultural Studies Linda Pershing.

“She asked if I had ever read The Hunger Games,” said Williams, who had taken a previous course with Pershing. “I said I had, and she asked me to re-read them, drawing political parallels between all three books and what’s happening in the United States today. The next thing I know I’m helping her design a new course.”

Williams is among more than a dozen students collaborating with Pershing in developing The Hunger Games: May the Odds Be Ever in Your Favor, a course set to debut in the spring.

The Hunger Games series of three novels by Suzanne Collins (and four subsequent movies based on the books) focuses on a grim vision of a dystopian future society. In the books, the annual Hunger Games, drawing on a modern version of the bloody battles in the Colosseum of ancient Rome, are a tradition for the amusement of the privileged and powerful Capitol region in the nation of Panem. The Capitol controls and enjoys all the wealth and resources of several outlying districts that exist in various states of poverty. The Games, which serve as punishment for a past rebellion, are a televised event with the unwilling young participants, called tributes, forced to fight to the death. The winning tribute and his or her home district is rewarded with food, supplies and riches.

“We love the strong, female leading character in the series, Katniss Everdeen, who lives in the impoverished Appalachian District 12 where coal mining is their only source of income,” said Pershing. “The course will be particularly interesting because there are lots of contemporary and relevant themes in The Hunger Games, including the role and effect of mass media and reality television, economic inequality and the growing divide between the rich and poor in the contemporary U.S., and a government that is controlled by an elite few.”

The effort fits in with Pershing’s penchant for using pop-culture to engage students in the study of deeper societal issues. For example, Pershing currently teaches a popular CSUSM class entitled Interdisciplinary Studies 370: Harry Potter: Culture and Folklore in J.K. Rowling’s Magical World, in which students learn to read Rowling’s fantasy series with a critical eye, discussing cultural issues from the realm of Harry Potter, such as the roles of social institutions, love and death, and class and race.

It was through the Harry Potter class that junior Sara Davis became involved crafting the curriculum for the new Hunger Games course.

“She asked the class if any of the students were interested in designing a Hunger Games course,” Davis said. “So I signed up.”

May the Odds Be Ever in Your Favor is not about fun and games.

“It’s about using popular culture to engage students in pertinent lessons about inequality, power and a range of other issues,” Davis said.

So how does one design a college course such as this?

“You have to identify what it is that these books are teaching us about American society,” Davis said. “We’ve also researched similar courses being taught elsewhere and asked those professors if they could provide syllabi. And lately, we’ve been planning out lesson plans week by week.”

“It’s been invaluable for me as a student to see how a course comes to be,” she added.

Course assignments will include a set of readings (three novels, four films and a series of theoretical and analytical essays), analysis papers, lively and engaged class discussions, and a final creative project.

Students working on this project have been meeting weekly with Pershing since the summer.

“Putting together the content is easy, and paralleling the content to social inequities in the United States is easy,” said Williams. “The challenge is in making this fun and not too depressing.”