Joenetta Benjamin attended a Southern Baptist church while growing up in South Carolina.

But seeing how elders in her church shunned a teenager who had been the victim of sexual assault led Benjamin to look for another outlet for her faith.

Now, many years later, Benjamin is sharing how faith impacts her as part of Cal State San Marcos’ new Beyond the Stereotype campaign, which was unveiled during the All Peoples Luncheon on Oct. 29.

“I hope that people have the opportunity to try to explore different backgrounds and different religious faiths and try to understand where another person is coming from,” said Benjamin, a psychology major. “I want people to know that just because you're brought into a faith by your parents, it is OK for you to explore different things. I've explored Buddhism, and now I'm just more a spiritual base. I have no particular religious ties, but I'm always open to getting to understand and learn about other people's religion.”

The Office of Inclusive Excellence sponsors the Beyond the Stereotype campaign to help educate about the impact of microaggressions and stereotypes on marginalized communities. The first campaign, “There is History,” was launched in 2015 and focused on race/ethnicity and cultural appropriation. It was followed in 2017 by “There is Pride,” which focused on sexual orientation and gender diversity. The new campaign, “There is Belief,” challenges stereotypes around religions, faith, spirituality and/or life practices within a social justice framework.

The campaign launched during the All Peoples Luncheon with the unveiling of five posters, each featuring a student, staff or faculty member holding a board with a message combating a stereotype about their respective beliefs.

For Benjamin, that meant holding a board with the message, “My Faith Is Not Evil.”

Benjamin found her way to Southern California from South Carolina through her service in the Army National Guard, which she joined in 2012. She transferred to CSUSM after two years at Palomar College.

“Once I had the opportunity to tour campus and see that it’s very diverse and they try to include everyone, I thought, ‘I want to join in and be a part of this campus community,’ ” she said. “I've been searching for a sense of belonging since I came to California because I have no family here and all my friends are from my military branch, and Cal State has definitely made me feel at home.”

Benjamin has been active in myriad programs at CSUSM, including the Educational Opportunity Program, the Student Veterans Organization and the Tukwut Leadership Circle, in which she serves as a member of the Peer Leadership Team.

Benjamin still remembers the impact that seeing posters from a previous Beyond the Stereotype campaign had on her, and she hopes the new posters have a similar impact on others.

“I'm hoping that people will take an opportunity to look at the posters with an open mind and just be able to be more inclusive in their practices every day,” she said.

“Each of the five posters represent the many diverse perspective of our CSUSM community,” Stevenson said, “but they do not represent all of our perspectives. The campaign launch showed a representation, but the campaign is open, and we welcome more participants.

“I think some people were hesitant to participate because they could not envision how religion or belief would be displayed on the posters. Now they have an opportunity to see how it’s beautifully represented.”

Stevenson praised the work of Marcus Torres, visual communications specialist in University Communications, for his efforts in designing the posters and Alan Brown, multimedia productions specialist, for his work creating an accompanying campaign video.

“I’m grateful to all of the participants who modeled and shared their beliefs with us,” Stevenson said. “And I really want to encourage others to participate as we continue to challenge and investigate the stereotypes surrounding belief, religion, spirituality, faith and life practices.” 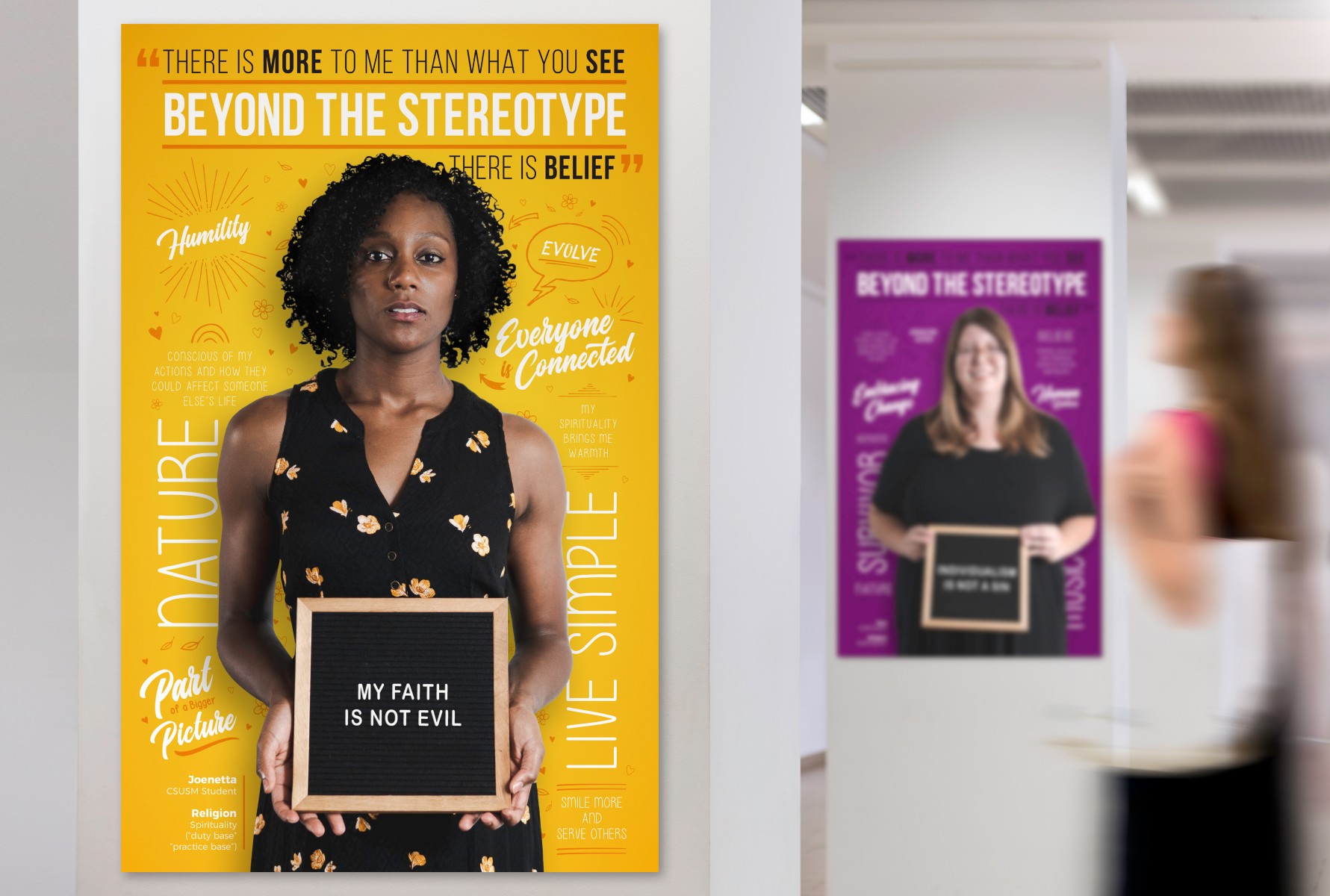 The new Beyond the Stereotype campaign, "There is Belief," launched on Oct. 29.