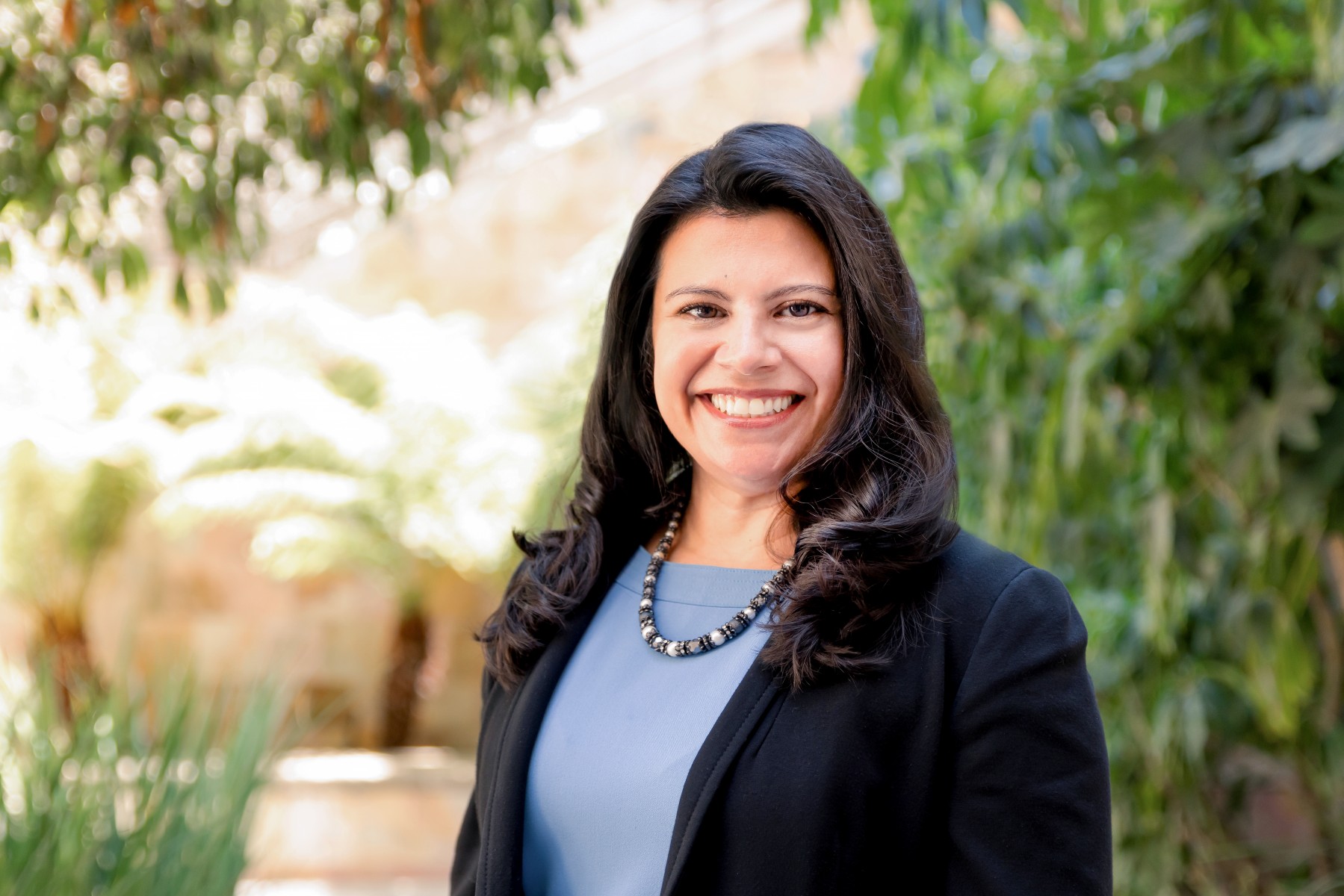 Viridiana Diaz is in her first full academic year as CSUSM's vice president of Student Affairs. Photo by Alicia Lores

Viridiana Diaz began her tenure at Cal State San Marcos in mid-January, but it wasn’t until commencement four months later that she finally had time to pause and reflect.

And, boy, did Diaz have a lot to reflect on.

On her decision to leave Sacramento State University, where she had spent all of her adult life, to become CSUSM’s vice president of Student Affairs.

On the serious foot fracture she suffered only a couple of days before she started at CSUSM, which forced her to navigate most of the spring semester in a walking boot, scooter and crutches.

And, as she gazed out from the commencement stage upon the sea of joyous faces, on her own improbable personal journey from immigrant child from Mexico who dreamed of little more than becoming fluent in English to higher education administrator who holds four degrees, including a doctorate.

“To be in a place where you have the privilege to be on stage and see thousands of graduates experience commencement, and see their families and know what it means to them, it was overwhelming,” Diaz said. “I just loved those two days. I didn’t really feel time. It was such an amazing experience for me to realize that I’m here and I have this incredible opportunity to have so much impact on the division of Student Affairs and in the lives of our students.”

Four months after that momentous occasion for Diaz, she feels fully at home in San Marcos, her foot has fully healed, and she is fully embedded – as her first complete academic year has begun – in the cause of leading a division that encompasses 32 departments organized into six different units by mission and service type, including Student Academic Support Services, Student Life and athletics. It’s a demanding job, to be sure, but one that she has been training for and working toward for more than two decades.

“Dr. Diaz is so full of ideas and boundless energy,” said Carl Kemnitz, CSUSM’s provost. “She’s been a great partner for me on matters of student success and enrollment management, where the two divisions regularly work together. I’m excited to see the full impact of her contributions to CSUSM as she hits her stride.”

Diaz came to CSUSM from Sac State, where her roots ran so deep that they might as well have been from a sequoia. She entered the university as a freshman student in 1994, only about six years after arriving in the United States from Mexicali with her mother and two brothers.

Her mother, Guadalupe,  didn’t complete high school and did physical labor that included agriculture, canning and house-cleaning. She aspired for more for her three children in America and wanted them to have opportunities beyond what she could imagine for herself.

Diaz earned a bachelor’s degree in communication studies in 2000, then earned a master’s in Spanish. Armed with two degrees, she began working at the university, first as an outreach counselor and a career coordinator and later as director of the College Assistance Migrant Program (CAMP).

Before coming to CSUSM, Viridiana Diaz spent more than two decades at Sacramento State, where she earned four degrees.
Viridiana Diaz broke her left foot on a couple of days before starting her new job at CSUSM.
"I just loved those two days. I didn’t really feel time," Viridiana Diaz says of her first commencement at CSUSM in May.

Year after year, Diaz kept advancing in Student Affairs at Sac State. She served as director of the Serna Center for Latinx/Chicanx students, co-director for the DEGREES Project, special assistant to the president, and assistant vice president for Strategic Diversity Initiatives. Simultaneously, year after year she attained more education – a second master’s, in history, in 2009 and a doctorate in educational leadership and policy in 2012.

But because Diaz was the first person in her family to attend college, her mother and siblings had to go through that unfamiliar experience with her and discover what it takes to achieve the dream of higher education and transcend future generations. It wasn't always easy, for her or for them.

“I know firsthand that, for many of our first-generation students, there can be tension when the values necessary to thrive in college conflict with the values learned at home," she said. “Being ambitious is not always perceived as a positive thing. Getting a bachelor's degree is a great accomplishment, and people will be proud of you. But if you're pursuing more than that, sometimes your loyalty is questioned because you are advancing your education instead of providing for your family.”

Diaz ultimately rose to the position of associate vice president of Strategic Student Support Programs, and during her time in Student Affairs, she helped Sac State achieve Hispanic-Serving Institution status and the Seal of Excelencia certification, secured multiple grants and launched the university’s Dreamer Resource Center while expanding the Serna Center.

“I am extremely proud of Dr. Diaz and all she has accomplished,” said Ed Mills, Sac State’s vice president of Student Affairs. “I knew she would make an outstanding VP and worked to help her advance in her career. Of course, losing her was very difficult. Not only because of her amazing leadership, but because she is so well known and loved throughout our Hornet family.”

Because it was her only professional home and because she was constantly ascending to new challenges, Diaz never saw any reason to move on from Sac State. But during the pandemic, the form that her inevitable self-reflection took was that she wanted to be a vice president. Fortunately for Diaz, her decision to aim for the next career rung coincided with the retirement last fall of Lorena Checa, CSUSM’s longtime VP of Student Affairs.

In only a matter of weeks, she accepted the CSUSM opening, wrapped up her tenure at Sac State, took her 12-year-old son out of school, and moved her family from the only city she really had ever known.

“It all happened so fast,” she said. “I was mentally ready. But I wasn't physically or emotionally ready. So the transition was rough. I was pretty homesick because I had never moved. I thought only kids got homesick. No, adults do, too.”

Diaz arrived in San Marcos during the second weekend of January. While moving into her new residence, she slipped down one of the stairs as she was carrying a box and broke her left foot. An X-ray revealed a Jones fracture, and Diaz underwent surgery in which a metal plate and screw were implanted.

When she was greeted on campus by CSUSM President Ellen Neufeldt and other administrators a couple of days later, she was getting around on a knee scooter. The bad injury luck, though, came with an unexpected benefit.

Instead of rushing headlong into her new environment, Diaz eased in and took the time to learn the division inside and out. She met with the Student Affairs senior leadership team. She had lunch sessions with all the managers. She set up a briefing with all 32 departments and engaged across her division and campus.

“I wouldn't feel as optimistic or as confident that Student Affairs is very well positioned for a great academic year if I had not had an opportunity to be a learner last semester,” Diaz said. “And now, in this first semi-normal post-pandemic fall semester, we will need to create the environment that we want our students to join, be part of and thrive in. It starts with us, and Student Affairs is going to play a very critical role.”

Johnathan Rodney remembers the moment he failed a test in his precalculus class during his first semester of college. He thought the only way to tell if he was cut out to be in college was to put …
Read more

Cal State San Marcos has been awarded a nearly $3 million, five-year grant from the California Institute for Regenerative Medicine (CIRM) to invest in its newest education pillar, the COMPASS …
Read more