Nursing Is a Family Affair for Graduate 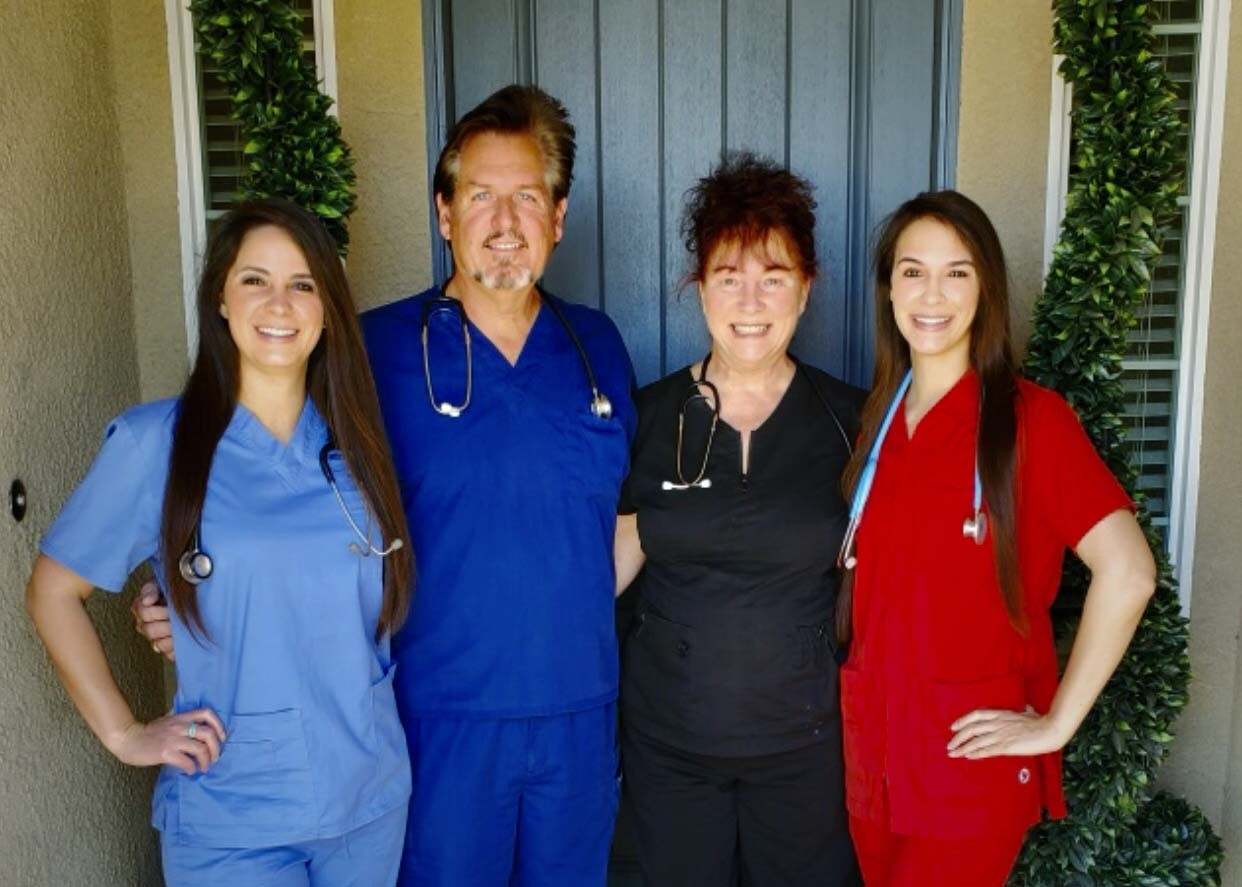 Class of 2021 nursing graduate Sarah Menyhay (far left) is pictured on National Nurses Day on May 6 with (left to right) her father, Steve, a hospice nurse; her mother, Pamela, a pediatric nurse; and her younger sister, Alexa, a nursing student at Fresno City College.

In the Fresno community where Sarah Menyhay grew up, there was never much doubt about where you would turn if your child was sick and you didn’t know what was wrong or what to do.

You would call the Menyhays. If the father, Steve, wasn’t home, you’d talk to the mother, Pamela. If Pamela wasn’t there, you’d talk to Steve. If either was around, well, all the better because that meant double the knowledge.

They were the neighborhood nurses. Pamela has been a pediatric nurse since she was 22. Steve has held that same job since his early 30s. And as they dispensed medical wisdom and personal empathy in equal doses to people on their street as well as hospital patients, you’d better believe that Sarah and her two younger sisters were soaking it all up.

Some children rebel against their parents’ profession. Sarah has modeled her whole life after it.

“Growing up hearing everyone always being so thankful to have my parents in their lives and in our neighborhood, I was like, ‘I’m going to follow in their footsteps. I’m going to do the same thing,’ ” she said.

The road has been longer and more arduous than she might have expected, but Menyhay has reached a major milestone en route to emulating her mom and dad. On Sunday, she will graduate from the accelerated bachelor’s program in the School of Nursing at Cal State San Marcos, with Pamela and Steve in attendance for the commencement ceremony on campus. The next day, just Pamela (because only one guest is allowed) will join her for the nursing pinning ceremony at the University Student Union amphitheater.

Due to COVID-19 restrictions, much to Menyhay’s chagrin, among those not able to celebrate her accomplishments in person will be her younger sister, Alexa, who’s in the nursing program at Fresno City College; her youngest sister, Claire (nicknamed “The Baby”), who’s finishing up her prerequisites for nursing school at Fresno City; and her 90-year-old grandmother, who lives with the family and was a licensed vocational nurse before retiring.

“Medicine definitely runs in our family,” Sarah said. “I think my parents are very happy and blessed that my sisters and I get to keep the tradition alive. And it’s not like it was forced on us whatsoever. We all chose this on our own.”

After experiencing great mental and emotional strain early in nursing school – she says she cried every night and considered dropping out because of the demands of the program – Menyhay is finishing on a high note. Like many of her classmates, she derived tremendous personal and professional satisfaction from a spring semester in which the community health rotation essentially turned into a series of shifts administering vaccines on the front lines of the pandemic.

Menyhay estimates that she gave almost 400 shots during the semester, and among those were two very noteworthy ones. On St. Patrick’s Day, she was the lucky student who gave the shot that was the 10,000th administered at the Palomar Health vaccine clinic in downtown Escondido (there were balloons and a giant banner sign to commemorate the occasion). A few days later, Menyhay responded to a call from nursing professor Katie Robinson seeking a volunteer to give CSUSM President Ellen Neufeldt her second vaccine shot at The Sports Center on campus.

In multiple ways, Menyhay was the perfect person for what she called a “once-in-a-lifetime opportunity.” Not only has she grown to love giving vaccines – to the point that she also volunteered to work as many shifts as possible at the vaccine clinic for the campus community – but she possesses a warm, gregarious personality that allows her to connect easily with patients.

“As far as anyone looking on could tell, Sarah may as well have been having coffee with the president as opposed to giving her a vaccination,” Robinson said. “Sarah is an incredibly affable person, which will serve her well as a nurse. Her sincerity and caring nature truly shine when interacting with clients.”

It’s in Menyhay’s DNA – both the passion for nursing and the affability. Her father is a hospice nurse now, but he spent most of his career working in a children’s hospital, where he would do magic shows (with Sarah’s assistance) to help buoy the spirits of sick kids. He would also wear different-colored socks on purpose to make patients laugh and distract them from the sometimes-unpleasant task at hand.

“My attitude is, ‘I’m going to talk to every patient that I can, make sure they’re OK and feel comfortable,’” Menyhay said. “I think that’s embedded in me through my parents. I’m always concerned about my patient’s needs. It’s more than just having that label of an RN and making that income. For me, it’s about the people and patients.”

Menyhay originally had medical school in her sights. After high school, she attended community college in Fresno for five years to load up on the science classes she would need, then transferred to UC Davis, where she earned a degree in psychology. But the process of applying to med schools coincided with a difficult time in her life; within a matter of months, three of her grandparents died of different illnesses.

“Juggling classes and work and watching them in a hospital was hard to do,” she said. “It was too much for me. I was turning 30 and didn’t want to be in school for another 10 years of my life.”

Menyhay switched gears to nursing and enrolled at CSUSM in January 2019. Once on campus, she joined the Student Nurses Association, through which she volunteered for events on youth science education, suicide awareness and eating disorders. But though she worked out a viable lodging arrangement in San Marcos, living with her boyfriend and his sister, she’s a homebody at heart. When the pandemic struck last year, she relished the chance to move back to Fresno and spend more time with her family while taking classes virtually.

That changed this semester, as she threw herself into a historic opportunity to help the country recover from a health crisis through mass vaccinations. Following graduation this weekend, she plans to stay in the region in the hopes of landing a nursing job at a hospital like Rady’s or Scripps. Her long-range goal is to go to nurse practitioner school and focus on either pediatrics or women’s health.

“She seems to share the same passion and commitment to the profession as her family,” Robinson said. “Whether inherited or learned, she certainly appears to be following a real calling. She will make her family proud.”

Nursing Is a Family Affair for Graduate