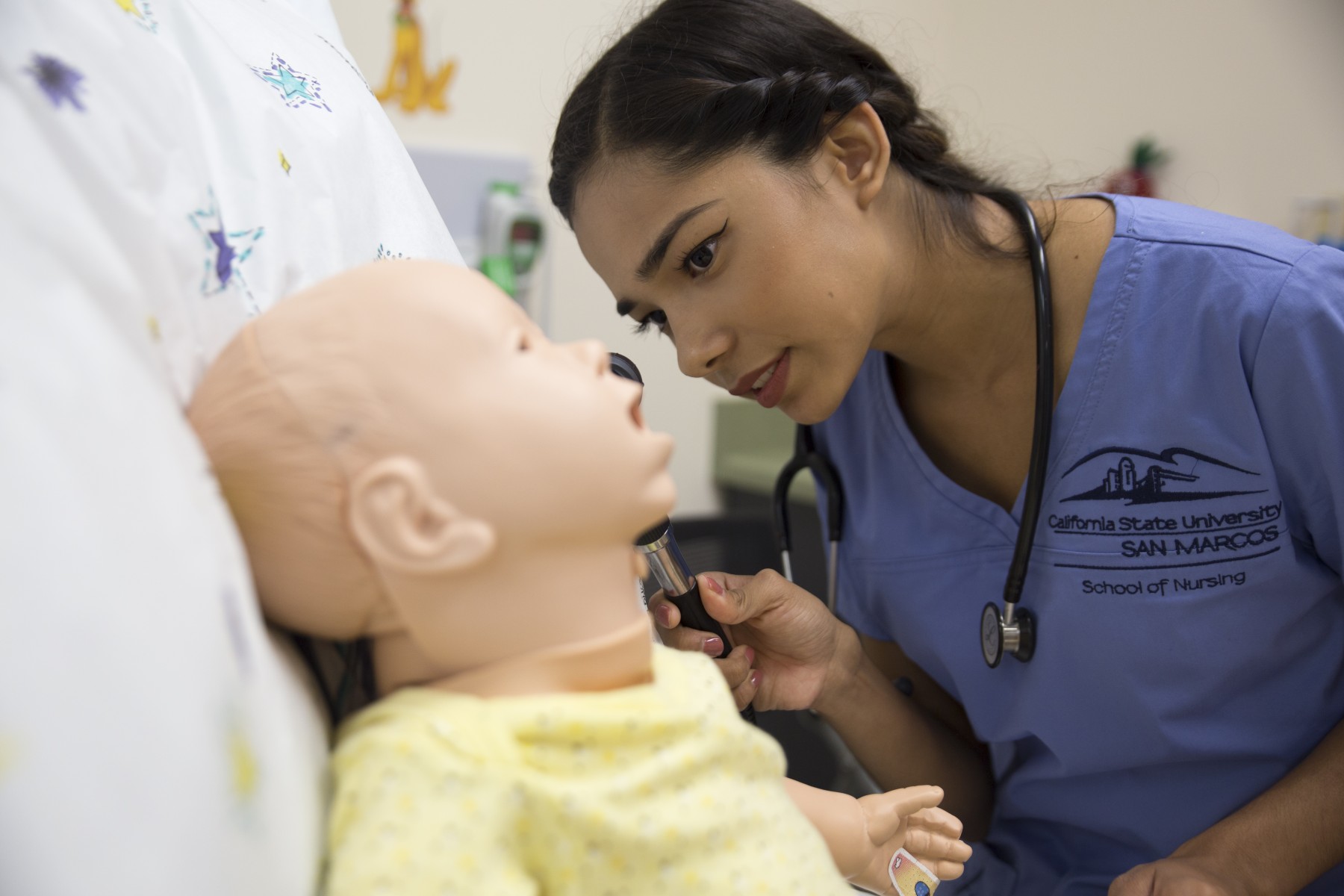 Carolina Quirarte has seen first-hand the difference that a healthcare provider’s demeanor can have on a patient.

Carolina watched her grandmother battle breast cancer for 14 years. Her grandmother’s emotional state was a like a roller-coaster ride, rising and falling as a direct result of the disposition of the doctor or nurse.

It was seeing the help and kindness her grandmother received from a hospice nurse that inspired Carolina to pursue a career in nursing.

It wouldn’t be an easy road. Carolina’s father died when she was 5 and her mother struggled to support Carolina and her siblings.

But Carolina is well on her way to achieving her dream of helping others just as that nurse helped her grandmother.

A third-year student at Cal State San Marcos, Carolina recently received a welcome reward for her hard work, earning the CSU Trustees’ Award for Outstanding Achievement by being named the Sycuan Band of the Kumeyaay Nation Scholar. The Trustees' Award is given annually to one student from each of the 23 CSU campuses to those who demonstrate superior academic performance, personal accomplishments, community service and financial need.​​​

Carolina is part of the TRiO SSS program, which assists first-generation, low-income and/or students with disabilities toward the successful completion of their college degree.

“Carolina’s undergraduate work is truly impressive," Rivas said. "Carolina is intelligent, highly motivated, humble, compassionate and has a strong commitment to gaining the necessary experience to build her nursing skills.” 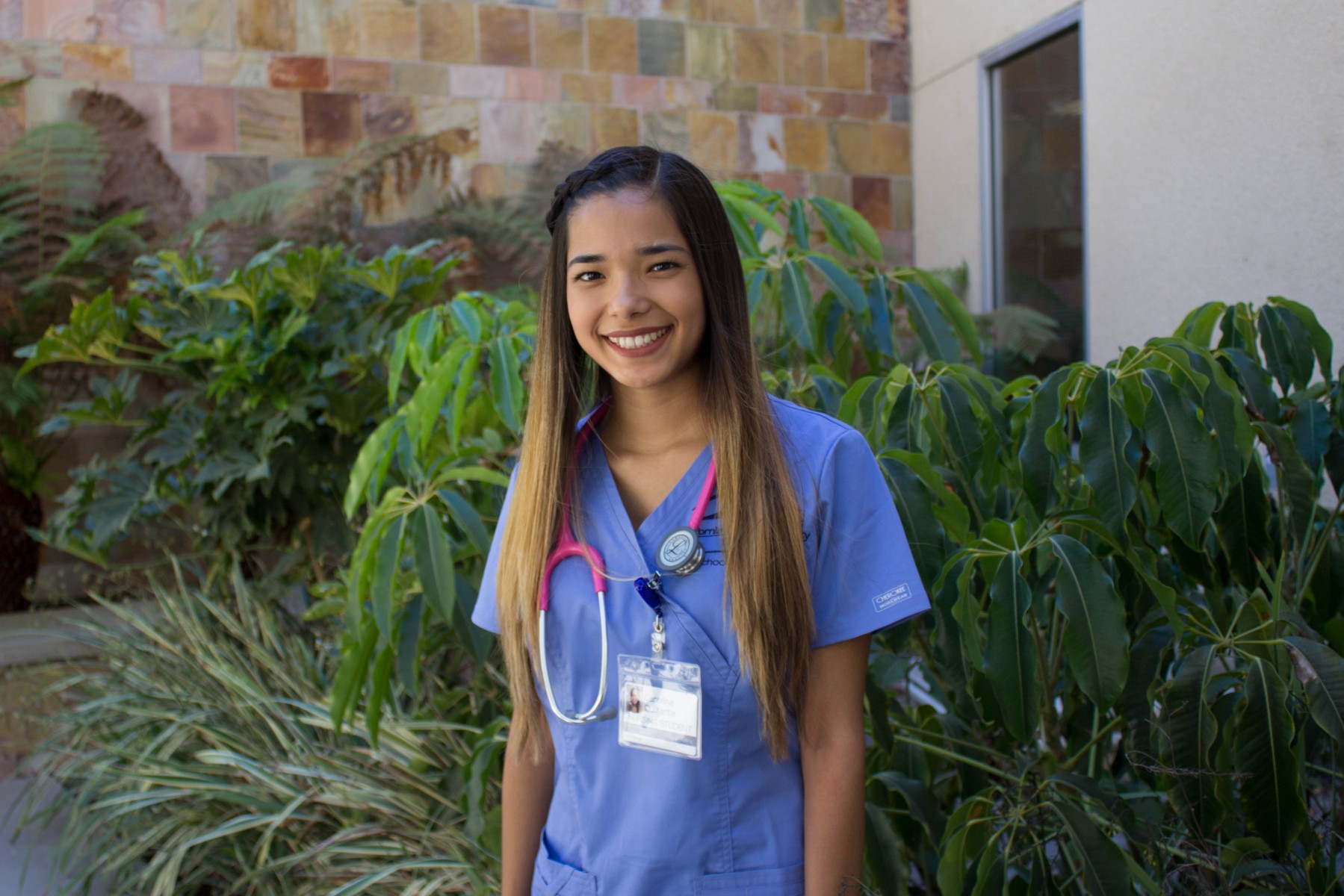 It wasn’t until her sophomore year of high school that Carolina even began dreaming about attending a four-year university. Growing up in Imperial Valley, she said her high school teachers played a big role in encouraging all students to strive to attend college.

While Carolina’s grades were strong throughout high school, the day-to-day financial difficulties her family faced were a burden that made it difficult to think about attending a four-year university

“My mom has worked very hard to give us everything we needed," Carolina said. "Growing up I had my family, and that was more than enough for me."

Carolina received fee waivers to apply to four CSU campuses. She received acceptances from San Diego State and Cal State San Bernardino with the caveat that she would have to change her major because each school’s nursing program was impacted.

CSUSM’s program also was impacted and Carolina had been told only about 10 percent of applicants are accepted into the program.

But she was part of that 10 percent.

“I never really imagined myself being here in my blue uniform in the nursing program,” she said.

Coming from a low-income family, Carolina was able to receive financial assistance for tuition, which helped her mom overcome initial concerns about how they would pay for college. She has managed living expenses by staying with a relative in Southwest Riverside County and commuting to CSUSM.

Though she is only now officially a nursing major after two years as pre-health, Carolina has already logged more than 200 hours at two hospitals and still volunteers four hours a week at Palomar Medical Center as a medical interpreter.

The experience has only reaffirmed her decision to pursue nursing.

She vividly remembers the frequent trips to the hospital for her grandmother’s cancer treatment. And the memory of one nurse’s compassion as her grandmother was in hospice still looms large in her decision to follow this path.

Doctors frequently told Carolina’s grandmother she had a certain amount of time left. But the answer was different when her grandmother asked the nurse how much time she had left.

“The nurse took her foot and said, ‘I don’t see an expiration date,’ ” Carolina said. “No one can tell you when you’re going to go. That made a big impact on all of us. That’s what hospice workers do. They make sure people and their families are comfortable in their last days with each other.

“It’s something I want to do. I saw first-hand the effect that having a positive attitude toward a patient who’s at the end stages of their life can have. Just being that comfort, that hug, holding their hand. I know it’s going to be hard, but I think I can do it and I’ll be able to make that same difference that nurse made in our lives to other people.”