The Office Space of President Haynes 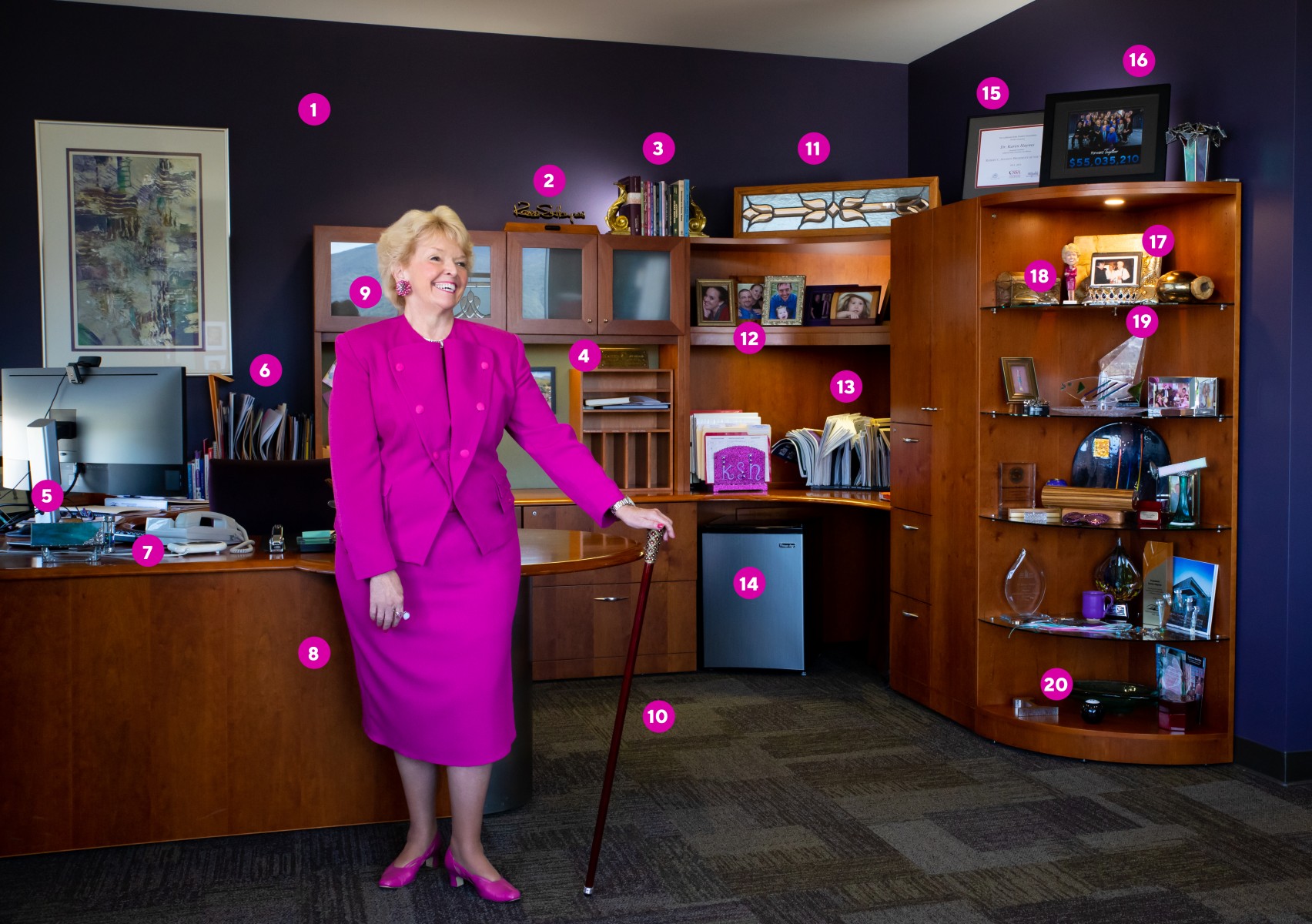 Office Space
Discover the stories and history behind some of the unique, unexpected and seemingly ordinary items found in President Haynes' office. Photo by Christine Vaughan

From the deep-hued paint on the walls to the faint aroma of coffee, President Haynes’ office is filled with delightful, unexpected and storied pieces.

1. Goodbye Taupe, Hello Presidential Purple // It was one of the first changes she made to her office. Initially, Haynes was told by the university architect that she could not have purple walls. Haynes still laughs as she recounts the story. “I replied, ‘I may not be able to change everything, but this I can,’ ” she said.

2. Signed with an “S” // Gifted by University of Houston-Victoria donors and designed by an artist who commissioned pieces for past U.S. presidents, the bronze-plated signature piece includes Haynes’ middle initial – “S” for Sue. While she was a dean at the University of Houston, Haynes’ mail often got mixed with that of her associate dean, Dr. Karen Holmes. Trying to mitigate mistakes, Haynes began using her middle initial in communications and within her signature. Although it didn’t make much of a difference in the mail sorting, the initial stuck. To this day, she includes the “S” when signing documents.

3. Penned with Purpose // Haynes has authored, coauthored or contributed to eight published books, including the revolutionary book she coauthored with her husband, “Affecting Change,” which focuses on advocacy as the central mission of social work practice. She keeps a copy of each of the seven editions in her office.

4. Haynes in Arabic // In the late 1970s, Haynes worked in Cairo for the U.S. Department of Health, Education and Welfare, which was housed within the Egyptian Institute for National Planning. This nameplate, written in Arabic, sat on her desk. “Active listening takes on a whole new meaning when your team’s first language is different from your own,” she said.

5. A Different Lens // One of more than 60 such objects owned by Haynes, this kaleidoscope was a gift from Professor David Bennett to thank Haynes for her candid insights on leadership success and failure during “In the Executive’s Chair,” a signature course of the College of Business Administration.

6. You’ve Got Mail // Haynes receives an average of 1,000 emails and 60 physical memos or documents requiring her authorization or review, weekly.

7. Some Like It Hot // Every morning at home, First Gentleman Jim Mickelson brings his wife a cup of coffee, which she prefers light with a little sweetener. But Haynes rarely finishes the cup. Instead, she sips it slowly throughout her morning, and then makes a second cup at the office. She keeps one mug warmer on her vanity at home and one on her desk.

8. Fuchsia Suit Wins // The legendary suit that Haynes wore, and referenced, during her open forum interview in 2003. One of three candidates vying to be the third president of CSUSM, Haynes famously said, “If you want to know why I’m wearing a fuchsia suit, it’s because I want you to remember me; and I’m pretty sure neither of the other candidates (who were men) will be wearing fuchsia.”

9. Tools of the Trade // Purchased from the jewelry store Casanova’s Downfall in Houston, these are the earrings Haynes wore during her campus interview. Haynes is known for her colorful, bold jewelry sets, often purchasing new pieces from wearable art festivals and boutique shops. Keeping those pieces together became a challenge, until Mickelson found inspiration at a hardware store. With rubber liners and easy gliding drawers, a customized top-chest toolbox holds Haynes’ many pieces.

10. The Object at Hand // In a time-honored CSU tradition, the outgoing senior president gifts a custom-made cane to their system successor. Haynes received her purple-jeweled cane in 2016 from President Ruben Armiñana, who was retiring from Sonoma State. Upon his retirement, Haynes became the first woman in CSU history to hold the title of senior president. In April, Haynes ceremonially passed the baton in the form of a new cane to Dianne Harrison, president of CSU Northridge.

11. A Renaissance Partner // Haynes’ husband, Mickelson, is an eclectic artist and hobbyist. His portfolio includes knitting, woodworking, photography, magic and stained glass. He built and gifted this piece to his wife in 1985 when she became dean of the Graduate School of Social Work at the University of Houston.

12. Sparky’s Family // Known to her grandchildren as “Sparky,” Haynes displays photos of her three children and four grandchildren throughout her office. Many of the images were photographed by Mickelson, who served as an unofficial university photographer for the first six years of Haynes’ tenure at CSUSM.

13. A Daily Dose // Every morning, Haynes reads Chronicle of Higher Education and Inside Higher Ed, and weekly she digests ACE’s President to President and AASCU’s Federal Highlights, keeping pulse of trends and challenges facing higher education, institutions and presidents.

14. Stocked Up // In any given week, Haynes has upward of 40 appointments on her calendar. Often on the go, Haynes keeps her refrigerator stocked with salads, cottage cheese, protein drinks, ready-to-go snacks and water.

15. Students First // In 2015, Haynes was honored by the California State Student Association as President of the Year, the highest award bestowed by the student-led organization. Students honored Haynes by saying, “Her student-centered leadership style, willingness to involve students in decision-making and support for statewide student advocacy efforts makes her a standout president.”

16. Audacious Goals // In a pinnacle of her career, Haynes successfully concluded CSUSM’s first comprehensive campaign in 2018. It was at her urging that CSUSM declared an ambitious $50 million goal – unheard of for such a young institution to attempt in its first campaign. Not only did she lead the university in exceeding its goal, but Forward Together shattered all expectations, raising $55 million.

17. A Source of Inspiration // Haynes has long been a champion for women’s rights and the advancement of women leaders. She keeps a photograph of her role model, Ann Richards, former governor of Texas, who she met through Leadership Texas, a women’s leadership network.

18. A Pearl of Wisdom // Gifted by her former chief of staff, Matt Ceppi, Haynes’ likeness was modeled into a bobblehead. Don’t look too closely, though. The bobblehead features Haynes sporting pearl earrings and a pearl necklace. Haynes, known for her bold jewelry, still laughs when she looks at it, exclaiming, “When have I ever worn pearls?”

19. Fit for a Queen // A birthday gift from her staff when she turned 70, the jeweled tiara features Haynes’ favorite color: purple.

20. A Little Levity // “And they thought every decision was strategic,” said Haynes, joking. A gift from her staff, the Magic 8 Ball pays tribute to one of Haynes’ signature leadership beliefs – make time for fun.

The Office Space of President Haynes