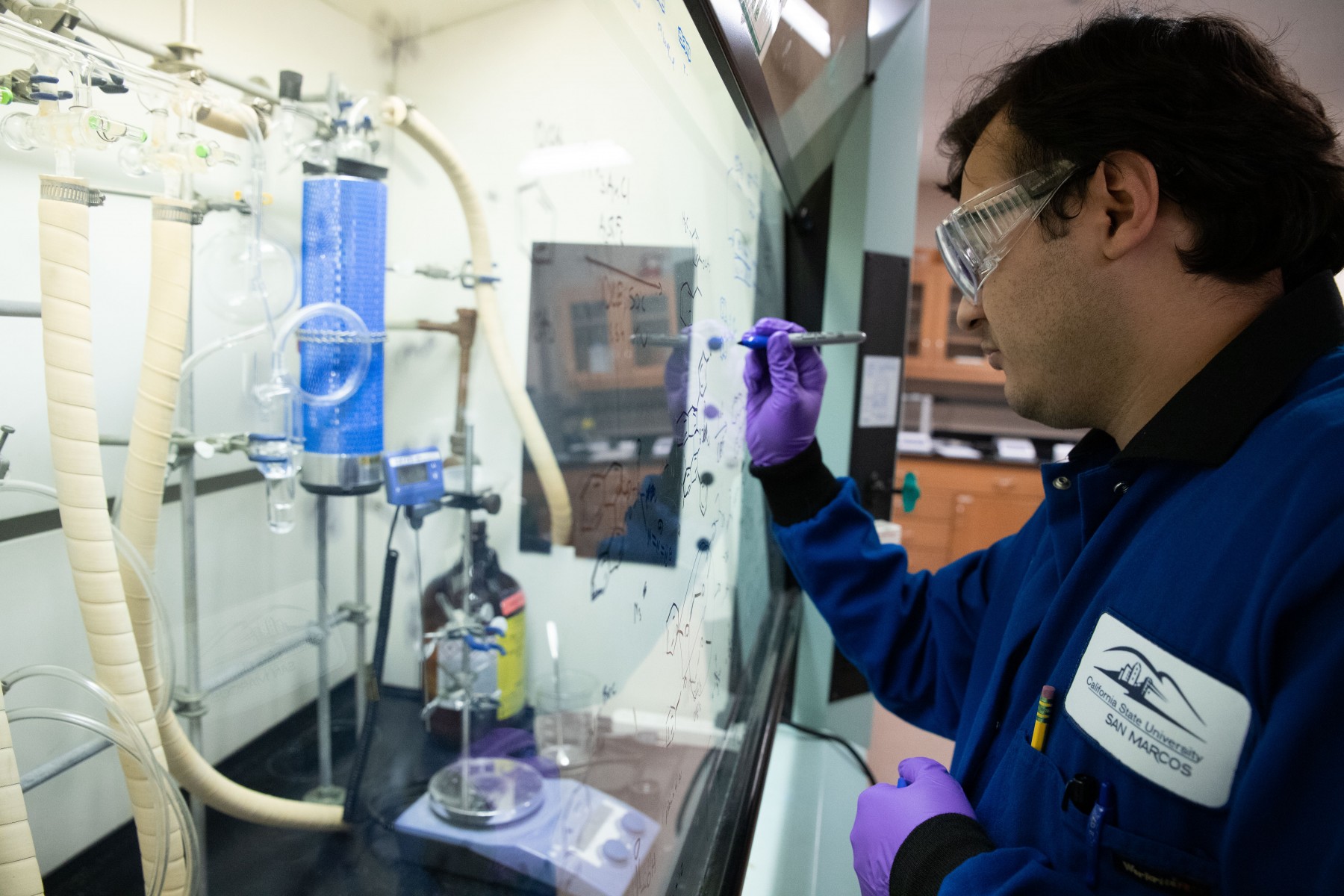 Omar Apolinar
The Cal State San Marcos biochemistry student has been published in the peer-reviewed scientific journal Angewandte Chemie for a study that has the potential to impact advances in the pharmaceutical industry. Photo by Andrew Reed

Cal State San Marcos student Omar Apolinar, who this fall will enroll in a Ph.D. program en route to a career in organic chemistry, has been published in the peer-reviewed scientific journal Angewandte Chemie for a study that has the potential to impact advances in the pharmaceutical industry.

Apolinar’s co-written research paper, “Catalytic, Enantioselective α-Alkylation of Azlactones with Non-Conjugated Alkenes via Directed Nucleopalladation,” resulted from his work in the Engle Lab in summer 2018 at Scripps Research through its Summer Undergraduate Research Fellows (SURF) initiative. The paper details a process utilizing palladium and chiral phosphoric acids to manipulate a simple compound into something far more complex in just one step. The discovery could potentially lead to creating new pharmaceuticals.

Angewandte Chemie is a peer-reviewed journal of the German Chemical Society, and it has been published under different names since the late 19th century. Catalytic, Enantioselective α-Alkylation of Azlactones with Non-Conjugated Alkenes via Directed Nucleopalladation appeared in the journal’s February 2019 international edition.

“This is one of the higher-echelon peer-reviewed journals for organic chemistry published today,” said CSUSM chemistry professor Robert Iafe. “Even for a graduate student, this would be an amazing feat. Only the most highly driven undergraduate could accomplish something like this.”

Apolinar said the experience has been beyond inspirational.

“I never would have imagined that I could ever have had a research paper published in a journal such as this,” Apolinar said. “It’s amazing to realize that I have contributed to the chemistry literature. It’s something that can never be taken away, and it motivates me to want to publish more original work that can lead to other discoveries.” 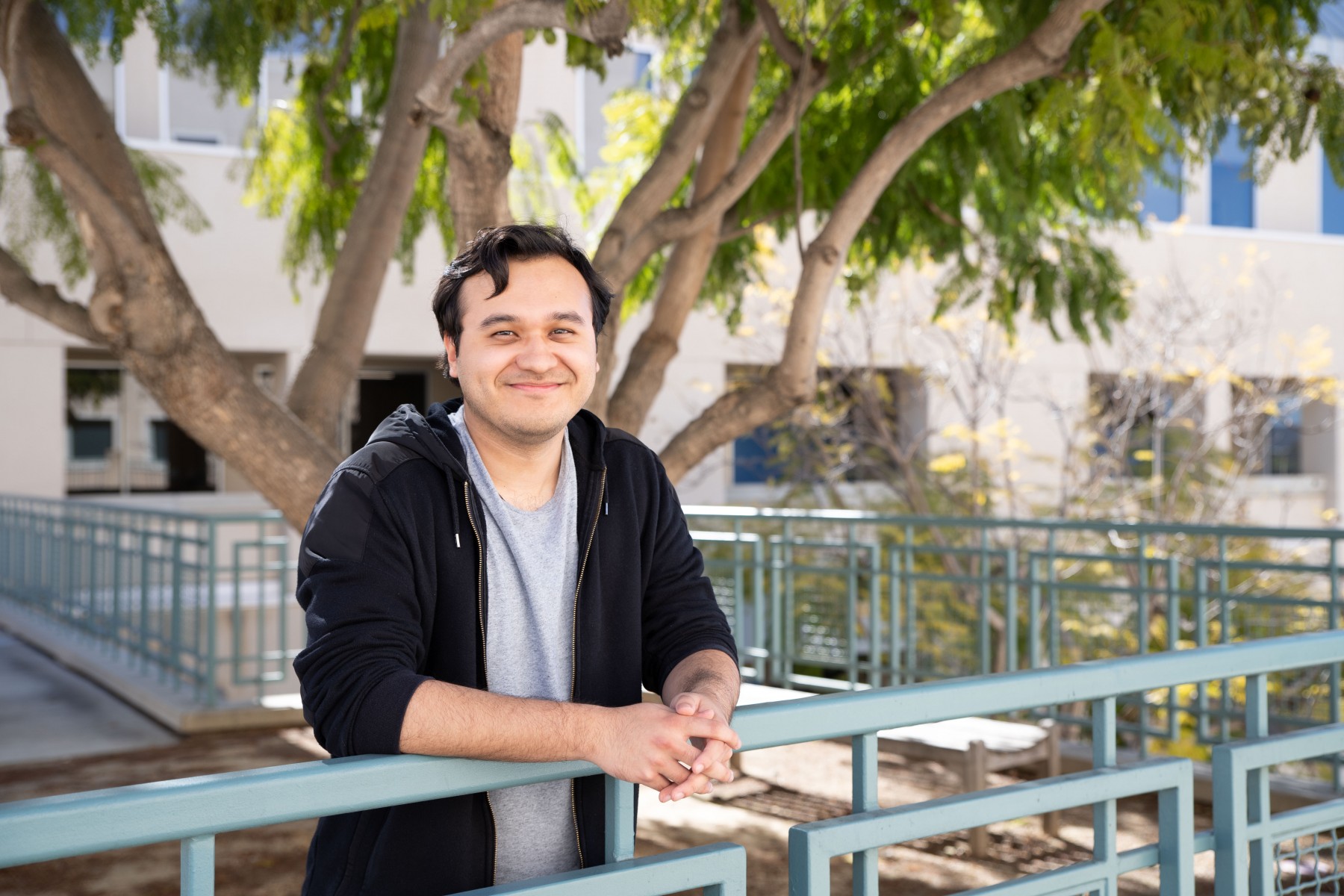 Omar Apolinar
The biochemistry major will graduate in May and begin a Ph.D. program next fall. Photo by Andrew Reed

Apolinar has been building a legacy at CSUSM since he arrived after graduating from San Marcos High School. He was selected as a California State University Program for Education and Research in Biotechnology (CSUPERB) Presidents’ Commission Scholar in 2017, an effort aimed at increasing the number of undergraduate students who can access a full-time research experience, and it supports up to 11 CSU undergraduates each summer. He worked as an undergraduate research assistant in Iafe’s laboratory his junior year. He is a STEM Peer Educator at the CSUSM STEM Student Success Center. And he was chosen to take part in the first cohort of the TRIO McNair Scholar program, which is dedicated to boosting the number of low-income and first-generation college students who earn graduate degrees.

He will be presenting research he has been conducting in Iafe's lab at the American Chemical Society’s 257th Spring National Meeting & Exposition from March 31 through April 4 in Orlando.

When he’s not in school or engaging in research, Apolinar spends much of his time as a volunteer operating the Pier Giorgio Food Pantry at St. Mark’s Roman Catholic Church in San Marcos.

“One of the really inspiring things about Omar is despite his accomplishments, he remains a very humble person,” Iafe said.

Apolinar said he has been drawn to the sciences since he was a child. Determined at one time to work in medicine, his goals began changing during his sophomore year in high school.

“I was taking a general chemistry class and we had a substitute come in for our regular teacher, who went out on maternity leave,” Apolinar said. “He decided one day he was going to teach organic chemistry, and I was captivated by it. I was captivated by the complexity of the molecules and how it all seemed like a puzzle but was really art. I decided then that this was something I was going to pursue.”

He made up his mind after taking Iafe's organic chemistry class.

“It completely changed my career path,” Apolinar said. “Everything from high school made sense; organic chemistry truly is art.”