One of 'Little Rock Nine' to Speak at CSUSM 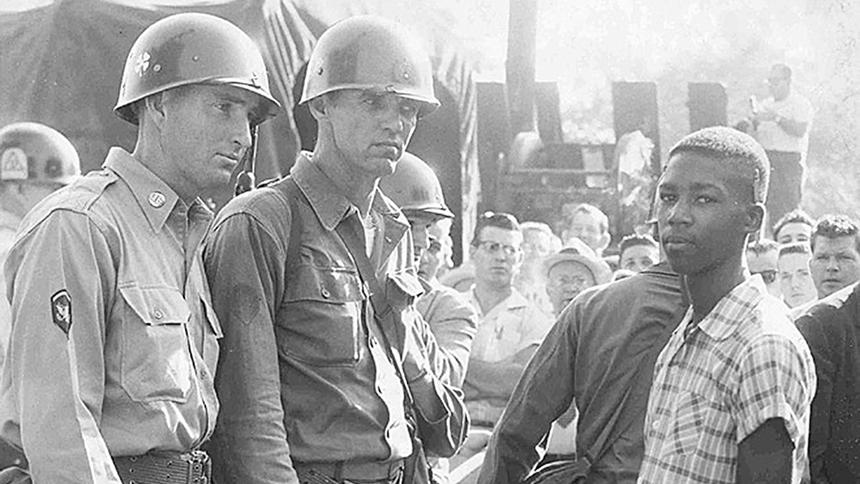 Dr. Terrence Roberts, one of the famous "Little Rock Nine," a group of brave black students that led desegregation of public schools in the late 1950s, will present "Lessons from Little Rock" and share his insights and perspectives on social justice at a special talk on Tuesday, Apr. 22 at 6 p.m. at CSUSM.

Organized by the University’s Arts & Lectures and sponsored by the African American Faculty Staff Association, Roberts’ talk is open to the public. A limited number of free student tickets are available and must be reserved online. Community members can purchase tickets online for $10 from the Arts & Lectures website. Buy tickets now...

“As a member of the original Little Rock Nine, Dr. Roberts will add a rich learning opportunity for our entire university community,” said Justin Lewis, president of the African American Faculty Staff Association and proposer of the event. “Seeing a glimpse of life in 1957 America, through the eyes of a student on the battle lines of segregation, is a special and unique opportunity. As a graduate of the California State University system, the insights that Dr. Roberts will share as a living member of American Civil Rights history will surely inspire our faculty, empower our students and invigorate our commitment to social justice.”

A Pivotal Year in History

The desegregation of Little Rock schools came on the heels of the historic 1954 Supreme Court decision in Brown vs. Board of Education, which ended legal segregation in public schools.

After the decision, the National Association for the Advancement of Colored People (NAACP) worked with the Little Rock School Board in Arkansas to begin the process of gradual desegregation. The school board, along with NAACP President Daisy Bates, identified a handful of black students, selected on the criteria of excellent grades and attendance, to be the first to desegregate the school district’s high school.

Of those selected, nine students bravely volunteered to be among the first. Those nine students became known as the “Little Rock Nine.” Terrence Roberts was 15 years old when he helped change history by being one of the first black students to attend classes at the previously all-white Little Rock Central High School.

On Sep. 4, 1957, the Little Rock Nine tried to enter Central High School but were turned away as an angry mob of 400 surrounded the school and the National Guard, by order of the Governor, refused admittance to anyone of color. The sight of a line of soldiers blocking out the students made national headlines and polarized the nation.  Members of the Little Rock Nine, including Elizabeth Eckford seen here on the right, endured both physical and verbal abuse.

Two weeks later and with a now even larger mob of protestors, the students attempted once again to enter the school. With local police fearing mass rioting, the students were removed from class. On Sep. 25 President Eisenhower sent US Army troops to accompany the students to school for protection, allowing the students to complete their first full day of classes. The troops remained stationed at the school for the entirety of the academic year, although they were unable to prevent incidents of violence in restrooms or locker rooms.

Roberts and his fellow Little Rock Nine students vowed not to engage in violence, a commitment that was tested daily as the students were harassed, bullied, threatened and physically assaulted by their white peers. The day after one female black student was expelled for defending herself, white students circulated little cards that read, “One down, eight to go.”

Following the uproar at Little Rock Central, Arkansas governor Oval Faubus closed all high schools in Little Rock for the 1958-1959 school year. That year Roberts and his family moved to Southern California and he completed his senior year at Los Angeles High School.

Roberts is a California State University alumnus, graduating with a Bachelor of Arts in sociology from CSU Los Angeles in 1967. He later went on to earn his master’s degree in social welfare from UCLA and obtain his doctorate in psychology from Southern Illinois University.

For more than 30 years, Roberts has led a successful career as a university professor and practicing clinical psychologist. In 1999 President Bill Clinton awarded the Congressional Gold Medal to Roberts and the members of the Little Rock Nine.

Today Roberts is a civil rights activist, diversity consultant and frequent keynote speaker. A compelling study of institutional racism, his memoir, Lessons from Little Rock, details his childhood in the segregated South and is a testament to the personal resolve that he and each member of the Little Rock Nine used to survive their first days at Central High. He is also the author of Simple, Not Easy: Reflections on Community, Social Responsibility and Tolerance.

One of 'Little Rock Nine' to Speak at CSUSM