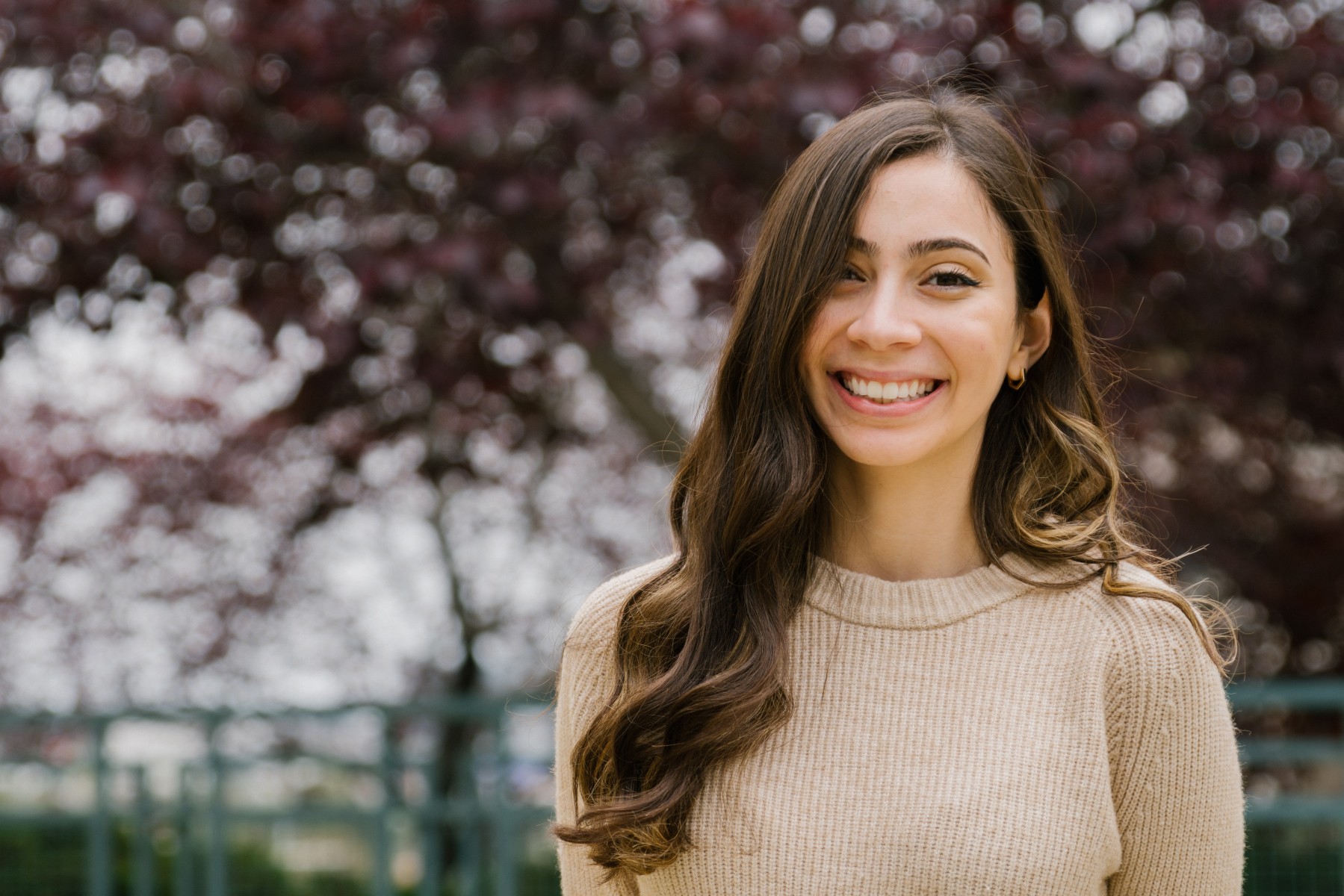 Krystal Alvarez-Hernandez has been named the President’s Outstanding Graduate after previously winning the dean’s award for the College of Humanities, Arts, Behavioral and Social Sciences. Photo by Blair Houk

That’s the mantra that was drilled into the head of Krystal Alvarez-Hernandez by her father when she was a child. It translates to: I’ve always worked with my hands so that you can work with your mind.

It’s an immigrant tale as old as the nation itself. Alvarez-Hernandez’s parents came to America to seek a better life for their children. In this version, her father, Gabriel, and her mother, Maria, married young and escaped traumatic lives in Mexico. After first working as a street vendor in Santa Ana, Gabriel found a job in construction. He would leave the family’s shared apartment before the sun rose and return late at night, caked in dust and grime.

His daughter was expected to aspire to more. Krystal was supposed to become the first person in the family to finish high school, much less go to college. She was supposed to break the cycle in which both her mother and grandmother had borne children very young.

Then she got pregnant as a junior in high school – and broke her parents’ hearts.

“When that happened, I was more concerned with what they were going to think and less concerned about what it would mean for my future,” Alvarez-Hernandez said. “I was really upset that I hurt them.”

Alvarez-Hernandez knows how that story almost always ends. She’s familiar with the statistic that only 2% of teenage mothers go on to earn a bachelor’s degree before age 30. The odds were overwhelmingly against her doing so.

Yet this month, seven years after learning the news that could have derailed her life almost before it got going, Alvarez Hernandez not only will graduate from Cal State San Marcos with a degree in psychology, but she will do so as the most decorated graduate in the entire Class of 2022, which numbers almost 4,500. Last week, she was named the President’s Outstanding Graduate after previously winning the dean’s award for the College of Humanities, Arts, Behavioral and Social Sciences.

And she’s not stopping there, either. In August, Alvarez-Hernandez will move with her husband, Alfonso, and their 7-year-old son, Santiago, to Chicago so she can begin a Ph.D. program in the Department of Communication Sciences and Disorders at Northwestern University.

“I’m determined to make my parents proud,” she said. “That’s partly what pushed me harder to continue with school after I had my son. Not only do I need to be a role model and example for him, I also need to give myself the best opportunity to honor their sacrifices by respecting myself enough to pursue my goals and interests. Because they were so disappointed in me, it was like, ‘OK, I’m going to show you guys that your sacrifices didn’t go to waste.’ ”

In Alvarez-Hernandez’s telling, she and her younger sister, Gaby, enjoyed a happy, sheltered childhood that stood in stark contrast to those of her parents in Mexico. Once her father established himself in construction, he was able to start his own company and buy a house in Lake Elsinore with plenty of room for curious girls to roam.

That idyll began to be punctured when Alvarez-Hernandez’s parents underwent a contentious separation during her freshman year of high school. Two years later, she was forced to grow up even faster when Santiago arrived. She had never excelled in school, and the turmoil at home didn’t help matters, but her son’s birth – far from causing her to drop out – resulted in her becoming laser-focused on education.

“It was no longer just about me,” Alvarez-Hernandez said. “I felt like I’d be doing my son a disservice if I just gave up and stopped trying to be my best self for him.”

After graduating from Lakeside High School, Alvarez-Hernandez enrolled at Palomar College, and the hour-long commute was only part of the problem. Because of the pregnancy, she didn’t get a driver’s license, so her grandmother had to drive her to campus every day. She was also shuttling back and forth between her parents’ now-separate residences, but as a student she was locked in and increasingly interested in psychology after planning to pursue pre-med.

At Palomar, Alvarez-Hernandez was first exposed to the foreign concept of scientific research as she worked for two years around her class schedule as an early interventionist for children under 5 diagnosed with autism through applied behavioral analysis (ABA). She transferred to CSUSM in the fall of 2019, and the ensuing spring she took the next step in terms of research by becoming an undergraduate research assistant for psychology professor Kimberly D’Anna Hernandez.

One of D’Anna Hernandez’s specialties is the role of acculturation and other psychosocial measures on the biological response to stress in pregnant women, especially Mexican and Mexican-American women. That dovetailed perfectly with the background and interests of Alvarez-Hernandez, who of course is both Mexican-American and a mother. Working during the dawn of the pandemic, she assisted D’Anna Hernandez in collecting data related to the impact of COVID-19 on the well-being of Mexican mothers living in the United States.

Alvarez-Hernandez quickly found a home in the research lab, partly because there were close to a dozen other Latina students working in it but mostly because of D’Anna Hernandez, in whom she found a kindred spirit.

“I owe her so much,” Alvarez-Hernandez said of her mentor, who moved on to Marquette University this academic year. “I didn’t have anyone to see myself in, to identify with. She’s someone I look up to. She’s a mother, she’s Latina, she’s successful, she’s independent, she’s making a significant impact on people’s lives. I can’t think of anything more fulfilling than to do that with my life as well.”

Later in the spring 2020 semester, D’Anna Hernandez connected Alvarez-Hernandez with Keith Trujillo, a longtime psychology professor who’s co-director of the U-RISE (Undergraduate Research Initiative for Scientific Enhancement) program, which provides professional development and research opportunities to students from underrepresented groups who show promise for success in graduate studies. Through U-RISE, Alvarez-Hernandez honed her burgeoning passion and talent for research, resulting in 10 presentations at local meetings and large national conferences, as well as multiple awards for her work.

“Through my work with Krystal, I’ve grown increasingly impressed with her,” Trujillo said. “She is thoughtful, organized and motivated, and regularly contributes insightfully to scientific discussions and assignments. She takes the program seriously and is a leader among this very successful group.

“Given her inspiring path from teen mom to Ph.D.-bound, she reflects the best of CSUSM.”

As she prepares to make family history by graduating from CSUSM, followed by moving across the country, Alvarez-Hernandez still sometimes can’t believe that she’s a budding neuroscientist. Only a few years ago, she wouldn’t have even known what that entailed, much less been able to imagine doing it for a living.

But she knows that Santiago is watching, and she’s resolved to show him that he can be anything he wants to be – just as her parents did for her.