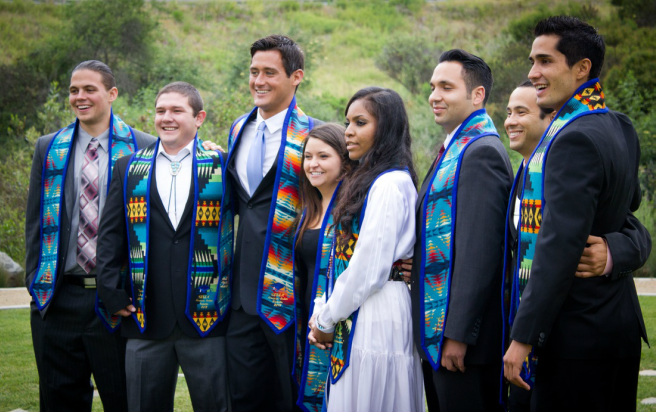 Built on the land of the Luiseño Indians, CSUSM is proud of its impressive history of engagement and partnership with the local American Indian population. At her fourth annual Report to Tribal Nations on April 9 on the Rincon Indian Reservation at Harrah’s Resort Southern California, Cal State San Marcos President Karen Haynes provided an update to regional tribal leaders, emphasizing the progress the University has made in recruiting, retaining and graduating American Indian students.

Although American Indian students have some of the lowest college matriculation rates and highest high school dropout rates in the country, CSUSM has made reversing these numbers a priority and, through purposive efforts, is making significant progress.

“Back in 2004 when I first arrived, I acted quickly to honor our campus’s Native American heritage by dramatically strengthening ties to our region’s tribal communities,” remarked Haynes. “Representatives from your communities responded in kind. Together we can be thankful for some remarkable successes.”

Despite Success There is More to be Done

“There is a lot of work to be done because we know we are up against some very tough trends,” reflected Haynes. “But let us be encouraged by our record of success in working together to make Cal State San Marcos the most vibrant center of Native American learning in the CSU system.”

Haynes also thanked a number of the tribal communities for their generous support, including the San Manuel Band of Mission Indians, which donated $500,000 in matching funds to the CICSC, and the Barona and Pala Bands of Mission Indians, who were essential to the University’s goal to meet the match.

Moving forward, the University is committed to continuing to attract and support a growing number of American Indian students, and to expand upon the impressive research work of the CICSC.

“Cal State San Marcos is all about making our students’ dreams come true,” she said. “I am confident that we will continue to make progress on realizing your dreams – our dreams – for American Indian education.”

Haynes’ full 2015 Report to Tribal Nations can be read online.