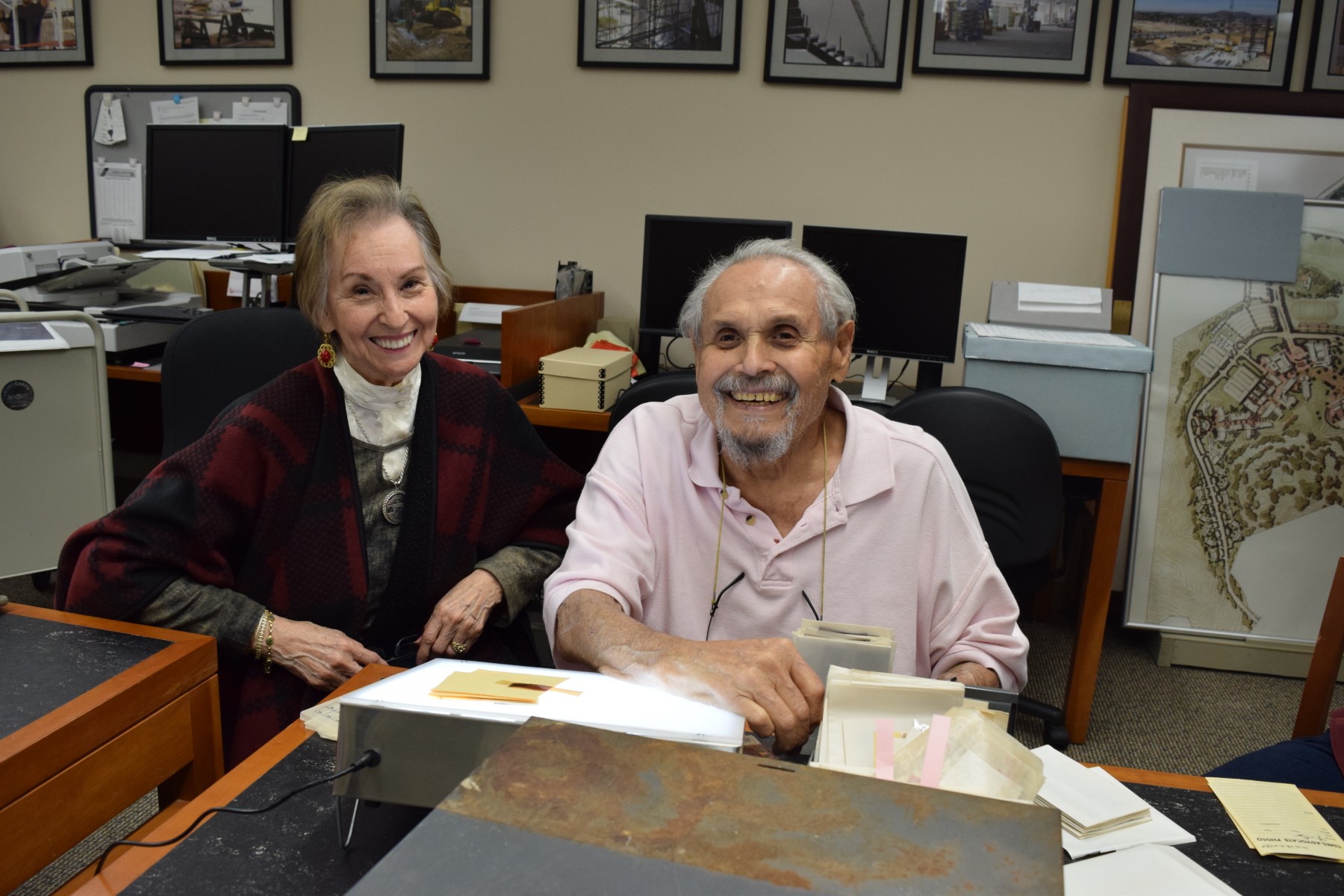 Retired photographer Dan Rios looks over some of the materials he donated to the CSUSM library with his wife, Theresa. Photo by Jamie Higgins

The message was drilled into him like a mantra by the first photography instructor he learned from: Negatives are the most important asset you’ll ever own as a photographer. Keep them. Safeguard them. Never throw them away.

Dan Rios was new to the craft as a nontraditional student at San Diego City College in the late 1960s, but he could recognize a valuable lesson when he heard it. The words of that teacher, Bill Dendle, followed Rios when he began his career as a newspaper photographer with the Escondido Times-Advocate in 1968. They stuck with him when that newspaper attempted to dispose of its collection of photo negatives in the ’70s and Rios rescued them from the scrap heap.

The words continued to resonate as Rios amassed dozens and dozens of boxes full of negatives over the decades and stored them in his increasingly overburdened garage. And they echoed in his mind long after he retired in 2001 and had to decide what to do with the enormous collection.

Thanks to the wisdom of Dendle, the diligence of Rios and the help of some history-loving friends, Rios’ life’s work as a photojournalist now belongs to the Cal State San Marcos library in perpetuity. Donated in 2018, the Dan Rios Papers, as the library’s Special Collections department has coined it, consists of an estimated one million images that were originally stashed in more than 40,000 envelopes and almost 200 boxes. The collection also contains large- and medium-format prints, contact sheets and hundreds of letters that Rios received over the years from readers who were affected by his photos.

“I’m over the moon about this. I never thought anything like this would happen,” said Rios, 83, who lives in Escondido with his wife, Theresa. “I just wanted the negatives to go somewhere that they could be stored, perhaps used a little bit.”

The library held a private ceremony on July 23 to honor Rios and his legacy as a photographer who chronicled decades of growth in North County and beyond (Rios spoke at the event). The library also recently held a crowdfunding campaign that raised $6,600 to purchase materials for rehousing the collection in an archivally safe manner.

“This is a collection that documents three decades of North County life,” said Sean Visintainer, head of Special Collections at CSUSM. “It documents its communities, its development, its important events, its architecture, its nature. That's very rare to have in an archival collection something that is as broad in terms of the subjects that have been photographed and as focused at the same time.

“In terms of importance, for this time period, I'm incredibly thrilled that we have this collection at CSUSM. And I think it's going to be important to our students, our scholars, our faculty and our regional community in ways that we can't even imagine yet because we don't have the work completed to see what its impact is going to be. But I know it's going to be impactful because there's not much else like it out there.”

Throughout his career at the Times-Advocate (which merged with another paper and became the North County Times in 1995), the boxes accumulated in Rios’ garage even as he had no idea what he ultimately would do with them. Members of the Escondido historical community became aware of Rios’ collection, some of them long before his retirement, and Rios finally succumbed to their good-natured pressure in 2017.

Local historian Alexa Clausen led the effort to find a home for Rios’ treasure trove. The Escondido History Center, of which she was a board member, had no room for it, and the San Diego Union-Tribune had no use for it. Other roads also hit a dead end.

Around the same time, CSUSM was forming its Special Collections department, which is designed to take on projects of such size and scope. It was a good match, too, for Rios, who first shot pictures of the campus back when it was a poultry farm and who sent two daughters to the university, including one who was part of the first graduating class.

“This fit perfectly with the mission of Special Collections, and it’s really important to our local history,” Visintainer said. “It was a natural fit for us to take this collection on.”

Visintainer was hired by CSUSM in 2019, one year after Rios donated his negatives and other items to the library. Since his arrival, Visintainer has overseen the organization of the Rios project, with most of the day-to-day work being done by Laura Nelson, a library services specialist.

During what’s called the first-pass inventory, Nelson has gone through almost all of the more than 40,000 envelopes. Some of them contain a single image, others as many as a few hundred. She is recording the title, date and other descriptive information that’s on the envelope, and all of that will be published online in a searchable database.

About half of the images, however, feature no context at all. So as an initial attempt to fill in those gaps, the library applied for and received a community-engaged scholarship grant from Community Relations & University Engagement to pay a student this academic year to digitize 11,000 images and post them on Flickr. Subsequent outreach into Escondido will try to use crowdsourcing and community memory to identify people and buildings who have been lost to history.

Rios’ assignments were mainly in Escondido and neighboring North County cities, but he also ventured south into San Diego and even Mexico. Visintainer was impressed to discover photos of the construction of the Coronado Bridge and other landmarks downtown and in Balboa Park, as well as significant happenings like a visit to Camp Pendleton by Margaret Thatcher, the storied British prime minister of the 1980s.

“A million images. Just crazy. I can’t believe it,” Rios said. “I loved being a photographer. I loved running around town like an idiot with my camera. People accepted me and were kind to me all over town.”

Notably, along with his immense collection, Rios also gave CSUSM copyrights to his images, which means that they are free for the public to use.

“You just don’t see collections of this size, documenting an area to this breadth and depth, that are publicly available,” Visintainer said. “It’s an incredibly selfless and wonderful thing that Dad did.”

The ceremony this weekend celebrating Rios’ legacy doubles as something of a capstone to an improbable life. Rios grew up in a Spanish-speaking household in the Central Valley town of Hanford, and he dropped out of school in the eighth grade to help support his family of day laborers, picking grapes or cotton or whatever crop was in season.

Feeling suffocated by the heat and a general dearth of hope, Rios persuaded his parents to move to San Diego, where two of his aunts lived. There, he and his father found work with a landscaping company, and he eventually was charged with maintaining the multi-acre lot of the La Jolla Art Center (now the Museum of Contemporary Art San Diego).

Rios came to realize, though, that his lack of education was hurting his job prospects, and in his mid-20s he enrolled at City College to study English grammar and math. Photography was an accidental discovery, but Mr. Dendle changed everything.

More than 50 years later, the CSUSM library is the beneficiary.

“I can’t even express my feelings because it’s so overwhelming that they’re going to find a use for my photos and help students and researchers and people who are interested in history,” Rios said. “If that helps them do their work and advance in their careers and I’m a small factor in that, that pleases me to no end.”

A history major without much interest in American history, Katelyn Peterson decided to tap into her love of old Western films when taking a risk on a topic for a recent research paper for her class …
Read more

Land acknowledgements have become increasingly common at institutions around the country. They are formal statements that recognize Indigenous peoples as traditional stewards of the land and respect …
Read more

A love of history is in the genes for MJ Teater. Both of her grandfathers studied the subject in college, and her mother devours dense texts about such arcane topics as medieval English …
Read more
NewsCenter