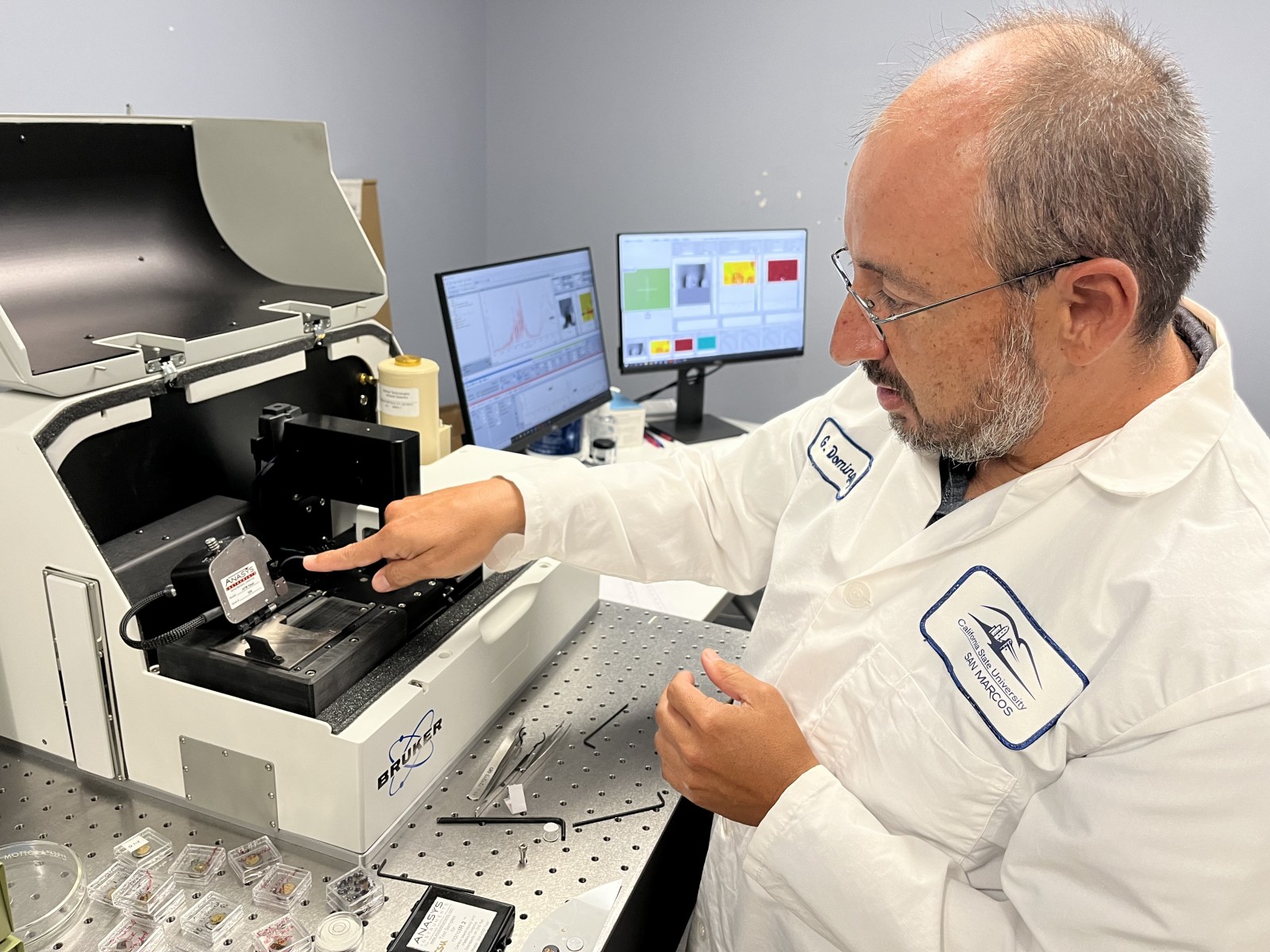 Physics professor Gerardo Dominguez shows off the nanoscale infrared spectrometer that he will use to analyze samples from the asteroid Bennu as part of a new NASA grant. Photo by Brian Hiro

Cal State San Marcos physics professor Gerardo Dominguez has received a three-year, $1.2 million grant from NASA through which he has joined a nationwide team of scientists that will analyze samples from a mission to a near-Earth asteroid and try to answer some of the biggest questions about the origins of planetary bodies and life in the solar system.

The grant establishes Dominguez as a member of the science team for the NASA mission OSIRIS-REx, which stands for the Origins, Spectral Interpretation, Resource Identification, Security-Regolith Explorer. OSIRIS-REx is the first U.S. spacecraft to collect a sample from an asteroid. It is on its way back to Earth to deliver samples it gathered from the asteroid Bennu in 2020; the samples will arrive on Earth in about a year.

Dominguez’s role on the science team will be to analyze samples from Bennu by employing a cutting-edge technique that he has pioneered called nano infrared spectroscopy (or nanoIR) in which he uses the tip of an atomic force microscope, in combination with infrared light, to identify and characterize nanoparticles – those that are smaller than a micron.

Dominguez honed this technique as a postdoctoral researcher at UC San Diego before he joined the CSUSM faculty in 2011. He said he’s the only one of dozens of OSIRIS-REx science team members who utilizes the nanoIR technique, and that his lab is the only one in the country that possesses such capabilities.

“It’s kind of a once-in-a-lifetime opportunity,” Dominguez said. “It will be very cool to look at these samples and contribute to this creation of knowledge about some of the most primitive objects in the solar system, the building blocks of the planets. I was telling my wife the other day that it feels like being selected for the space program, except without all the danger.”

Dominguez is receiving the NASA grant at the same time he is also being published as a co-author of a Sept. 22 article in Science magazine about measurements of samples from a different asteroid, Ryugu, as part of the Hayabusa2 sample return mission by the Japan Aerospace Exploration Agency (JAXA). Dominguez was a member of the team that measured samples at CSUSM and interpreted them over the past year.

The Science article reports that an analysis of 17 samples from Ryugu indicate that its parent asteroid formed in the outer solar system about two million years after the beginning of solar system formation.

“I expect to find lots of similar things with Bennu to what we've found with Ryugu,” Dominguez said. “But there will always be surprises.”

Dominguez said the first year of the grant will involve laying the groundwork for the sample analysis, including practice rounds. OSIRIS-REx is scheduled to return on Sept. 24, 2023, and after that NASA will send a tiny amount of Bennu material to Dominguez, who will spend the latter two years of the grant analyzing it.

Dominguez said the goal of his project is to augment the remote observations of Bennu already made by scientists with detailed measurements produced by advanced lab instruments. Using nanoIR to map the minerals and organics present on the asteroid could help Dominguez and the rest of the team better understand the origins of the planets and the molecular seeds to life.

“These samples are arguably the most primitive. We think they're basically what the building blocks of the planets look like,” he said. “Stepping back 4.5 billion years, interstellar dust grains got snowballed into these parent bodies. Well, this is what we think the parent bodies look like. We think the ingredients for life or the precursors to life probably came from objects like these. And we want to understand their history between the time that they were interstellar dust grains to this stage in their evolution.

“We see the planets, but they probably haven’t always looked this way. So how do we find out what the building blocks of the planets look like? This allows us to go back in time because these samples in many ways have been cryogenically preserved. It’s an enormous opportunity, and I’m very excited about it.”