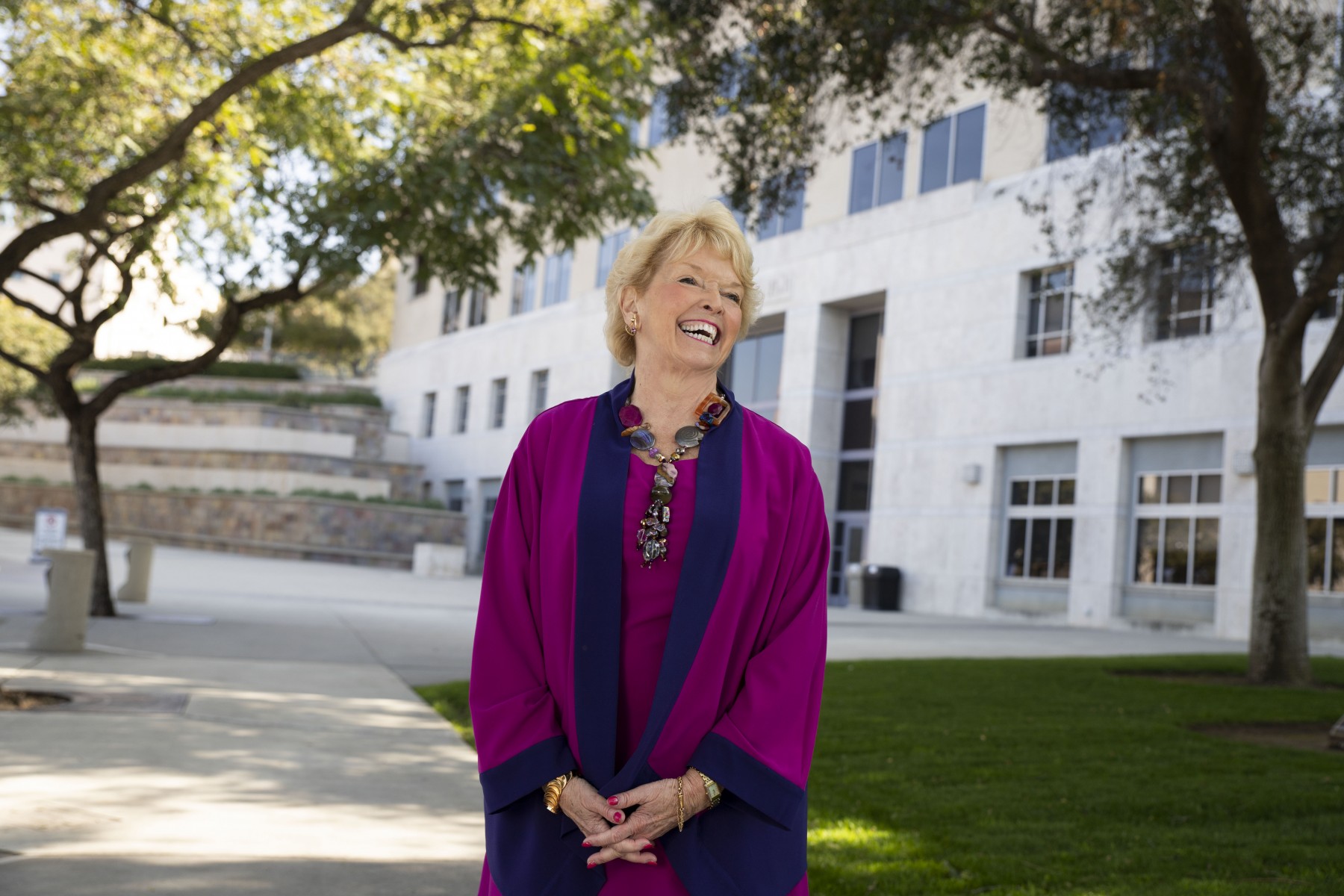 Bold Ambition
Karen Haynes will end her tenure as the longest-serving president in CSUSM's history when she retires June 30. Photo by Christine Vaughan

It came from a shop in Amsterdam, purchased while Haynes and her husband, Jim Mickelson, were teaching abroad one summer. This was before Haynes was appointed Cal State San Marcos’ third president, before she even knew where the university was located.

At the time, it was simply another suit to wear for work. Who could have known that this particular fuchsia outfit would come to symbolize a 15½-year presidency at CSUSM?

Haynes’ tenure, covering more than half of the university’s existence, will come to an end on June 30 when she retires as CSUSM’s longest-serving president.

“She’s been a perfect president in an important moment in time for this campus,” said Neal Hoss, CSUSM’s vice president of Finance and Administrative Services.

Haynes devoted more than three decades in academic leadership to creating opportunities for others. Her career has been defined by firsts – first in her family to earn a degree, first student admitted to the University of Texas-Austin’s social work Ph.D. program, first female academic administrator at the University of Houston, first female senior president of the California State University system.

Haynes’ legacy at CSUSM includes taking a small university of some 7,000 students when she arrived in 2004 and growing it into the educational hub of the region, a university that today has 17,000 students who represent the diversity of the surrounding communities. The 10 buildings that comprised campus back then have more than doubled under her leadership. The university’s alumni base, about 13,000 when she arrived, is approaching 50,000 – and Haynes has shaken the hands of nearly three-quarters of those graduates at commencement.

It’s not happenstance that the majority of those graduates are the first in their families to earn a four-year degree or come from an underrepresented background. It was all part of fulfilling the promises Haynes made when she accepted the appointment to become CSUSM’s president, from raising the educational attainment rate to creating a student body that mirrors the diversity of the region to ensuring that CSUSM was no longer referred to as “the best-kept secret.”

“What she says she’s going to do and what she says she believes, you see evidence in her actions,” said Patricia Prado-Olmos, CSUSM’s vice president of Community Engagement and a member of the campus community since 1997.

Bold goals – and achieving those goals – have been a hallmark of Haynes’ presidency. Much like a certain fuchsia suit. 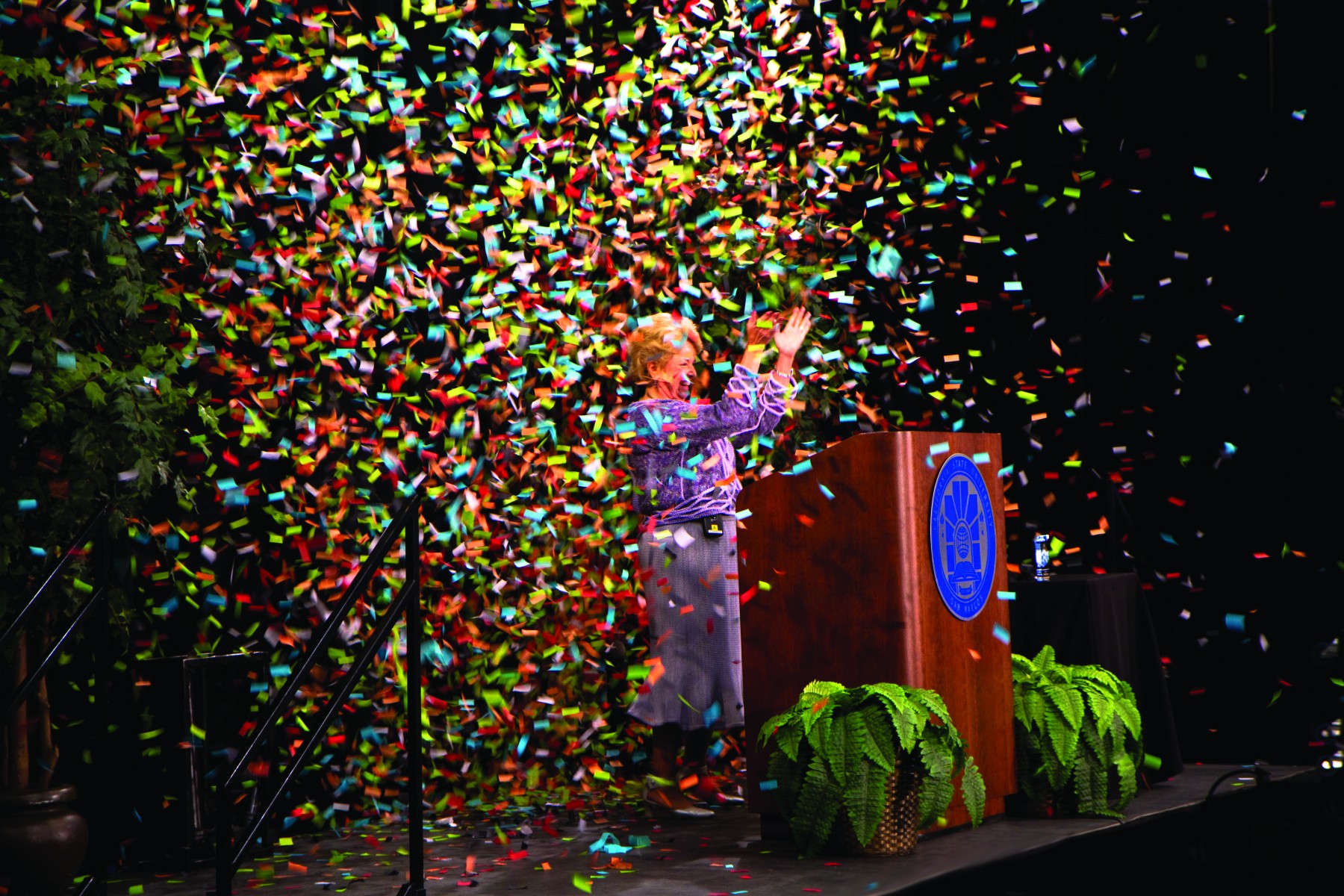 Bold Ambition
President Karen Haynes at her 2010 Report to the Community address.

Haynes has often said she never wanted to be a university president, and she certainly didn’t take a traditional path to the position.

Like so many of CSUSM’s alumni, Haynes is a first-generation college graduate, earning her bachelor’s from Goucher College in Maryland and her master’s in social work from McGill University in Montreal. She began pursuing her Ph.D. at the University of Texas-Austin when her son was 18 months old and gave birth to her daughter in Egypt six months before completing her doctoral dissertation and three years after enrolling.

Haynes’ higher education journey continued when she was hired in the late ’70s as an assistant professor of social work at Indiana University. She ascended to full professor before accepting a position as the dean of the Graduate School of Social Work at the University of Houston, where she became the university’s first female academic administrator – the lone woman among the 14 deans throughout her 10-year tenure.

When Haynes was appointed the interim president of the University of Houston-Victoria in 1995, she was thought to be the only social worker in the country who was a university president.

The move from dean to president wasn’t without challenges. The appointment was only supposed to be for a year, so Mickelson remained in Houston, where he was a well-known child advocate, while Haynes lived and worked 125 miles south in Victoria.

“We both knew intellectually that being a president meant something different than being a dean,” Haynes said. “We probably didn’t initially realize how much it meant in terms of the significantly higher degree of visibility.”

The University of Houston-Victoria conducted a national search for a permanent president and determined that the best person for the job was already in the position. Haynes served for 8½ years, turning a university that had campus climate issues when she arrived to one that regularly ranked among the top employers in public higher education in Texas.

But by the early 2000s, Haynes was ready for a new challenge. She became one of three finalists for a presidential appointment at a California State University institution – but it wasn’t the campus in San Marcos. 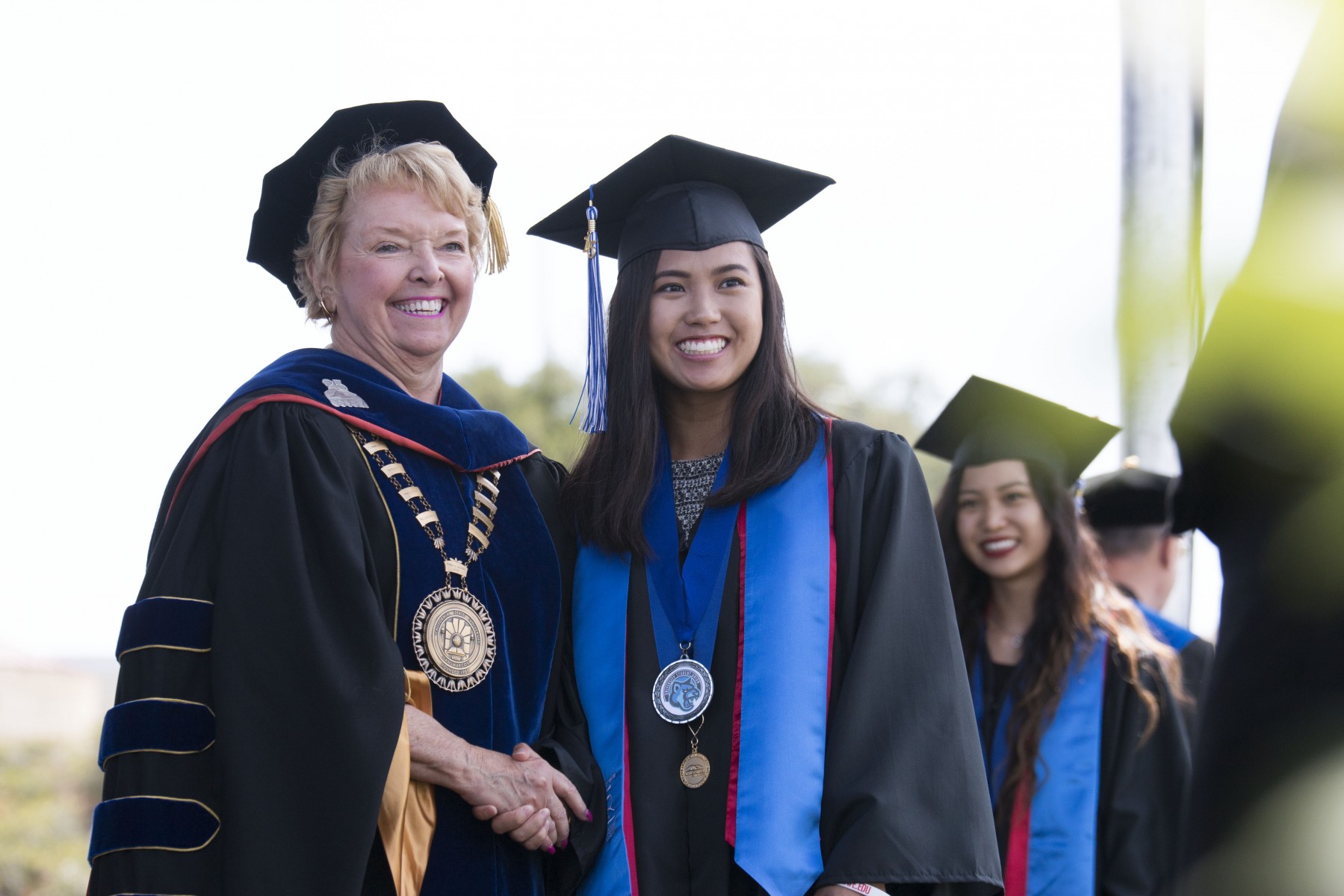 Bold Ambition
CSUSM's alumni base was about 13,000 when President Karen Haynes' tenure began in 2004. Now approaching 50,000 alumni, Haynes has shaken the hands of nearly three quarters of those graduates at commencement.

Haynes was a popular candidate for the presidential opening at Sacramento State in 2003. Though the job went to someone already in the CSU system – CSUSM’s second president, Alexander Gonzalez – going through the hiring process helped Haynes get to know then-CSU Chancellor Charles Reed, who still had two vacancies to fill – one at Chico State and another at CSUSM created by Gonzalez’s departure. Reed told Haynes she would have to choose just one to pursue.

Chico State was well-established, with more than 100 years of history. The opportunity to help shape a young university was too appealing to pass up. Haynes removed her name from consideration at Chico State and soon became one of three finalists for the job at CSUSM.

Today’s CSU presidential searches are conducted confidentially, but when Haynes was in the running for CSUSM’s opening, candidates were required to be on campus, meet with multiple constituencies, and appear at an open forum that provided an opportunity for the campus and external community to ask questions.

As Haynes was preparing for the forum, she showed Mickelson two suits she was considering: a navy blue one – what might be considered the norm for a university president – and the fuchsia suit from Amsterdam.

Mickelson had just one question.

Haynes replied that she did.

“Then wear the navy.”

Haynes chose fuchsia. She did, however, take Mickelson’s other suggestion.

Haynes opened the public forum by telling attendees that she chose the fuchsia suit because she was the first of three candidates and she wanted to ensure that they would remember her at the end.

“And I’m certain,” she added, knowing the other two finalists were men, “that I’ll be the only one in fuchsia.”

On Nov. 20, 2003, the CSU announced that Haynes would become CSUSM’s third president. Less than three months later, on Feb. 2, 2004, Haynes began her tenure at CSUSM.

It never occurred to Haynes at the time that it would be the beginning of an unprecedented stretch at CSUSM. 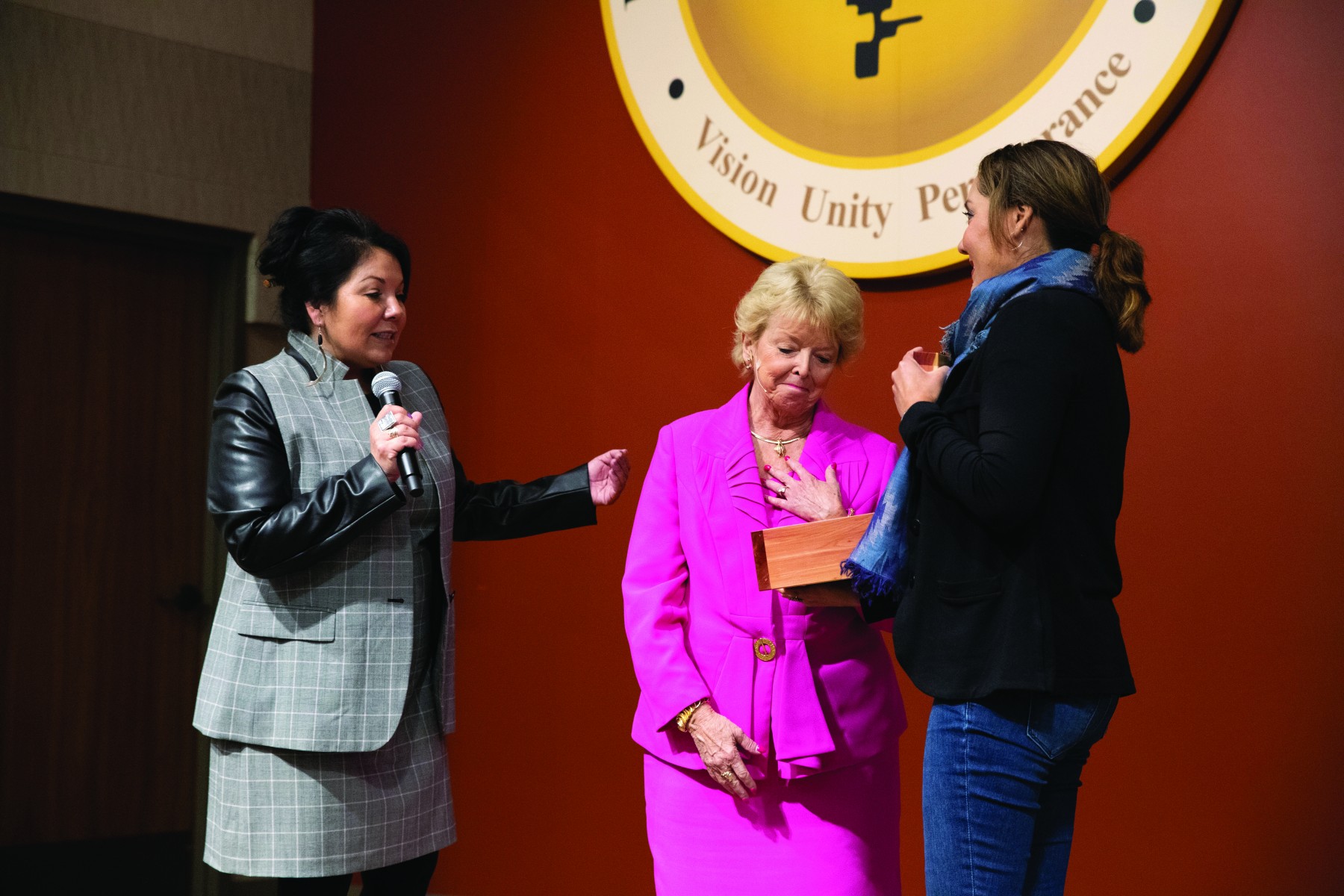 It’s easy to forget in 2019 how relatively small and undiscovered CSUSM was when Haynes arrived.

Kellogg Library hadn’t yet celebrated its official opening. The athletics department had six teams competing at the NAIA level. People were more likely to talk about the chicken ranch that the university land used to be than they were about it being the education hub of the region.

Haynes was drawn to the campus’ youth and potential. She saw the possibility for influence and vision. She knew it offered an appealing, fun challenge. She focused on the two words that have been a mantra throughout her presidency: bold and audacious.

Among the bold promises made by Haynes were that CSUSM would raise the educational rate of the region and the student body would reflect its diversity.

“That took the intention and focus of so many people across this campus,” Prado-Olmos said, “from admissions to recruitment to reaching back to the K-12 schools to building the support systems inside campus for students who were coming in and represented a very different reality than other students we may have had beforehand.”

Haynes delivered on those promises and countless others, helping CSUSM grow into a successful model for 21st century higher education.

Haynes oversaw the launch of the Alliance to Accelerate Excellence in Education, providing a guaranteed pathway to college for 200,000 K-12 students in the region. She hired the first full-time tribal liaison in the CSU system and developed a Native Advisory Council to advise her on serving the needs of local tribal communities. She launched the CSU Institute for Palliative Care to prepare current and future health-care workers while educating the community about the benefits of palliative care. She has been a champion for student veterans and their dependents, who make up 12 percent of CSUSM’s student population. She helped revive the Southern California branch of the ACE Women’s Network as part of her efforts to open doors for other women in academic leadership.

In December, Haynes successfully closed CSUSM’s first comprehensive fundraising campaign, Forward Together. At the time of its 2012 launch, no other university in the CSU – and likely in the nation – had attempted a campaign of its magnitude at such a young age. CSUSM shattered its $50 million goal, raising more than $55 million.

“She’s one of the most impactful presidents of an academic institution that I have ever known,” said Ruth Westreich, founder and president of The Westreich Foundation and a longtime CSUSM supporter. “She has created a legacy of success, of innovation.” 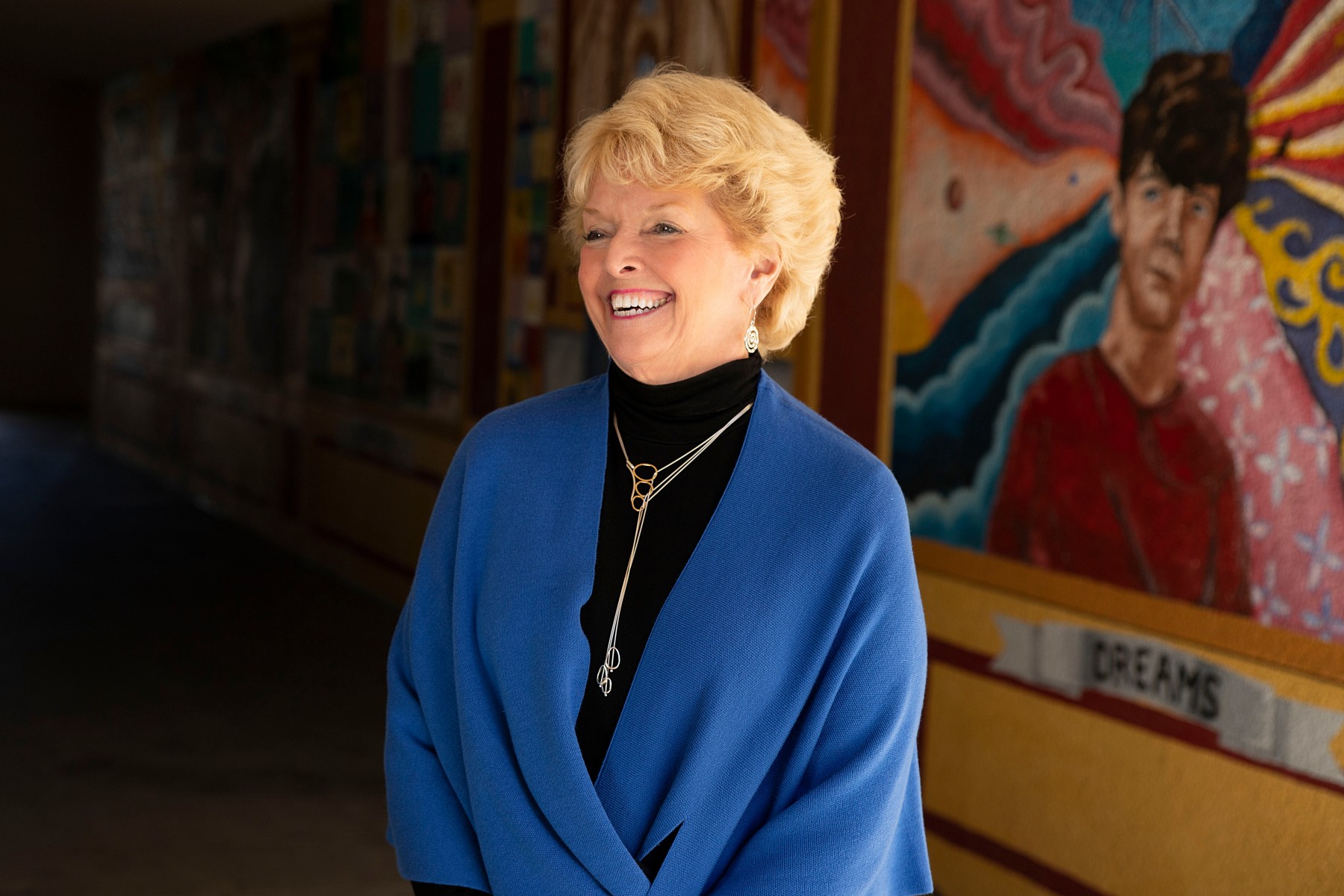 Bold Ambition
Karen Haynes will end her tenure as the longest-serving president in CSUSM's history when she retires June 30. Photo by Christine Vaughan

Being who you are

Haynes has often said to her leadership team, “Why would I leave if there’s still excitement?” She thrives on rising to challenges and making the most of opportunities.

“The thing that stands out to me is that she always remained positive and focused on the students,” Hoss said. “She cares about people and she has more energy than anyone.”

It’s the people who give Haynes energy, and it’s the people she will miss most. After 15½ years, she has as much enthusiasm for the job as she did on the day she arrived. But she also feels like now is the right time to step away.

CSUSM has enjoyed unprecedented success under her leadership, maturing as an institution and gaining visibility throughout the region and beyond.

Haynes and Mickelson are looking forward to spending more time with their three children and four grandchildren. They plan to travel, a passion for Haynes since she boarded her first international flight to Malaysia when she was 23 years old.

Perhaps one of those trips will take them back to the Netherlands, maybe even to a certain clothing shop in Amsterdam.

Haynes still has the fuchsia suit she wore to that public forum nearly 16 years ago. It fits today just as it did on Nov. 5, 2003. There have been times over the years when she has wondered if the suit has seen better days, when she considered donating it. But each time, she holds on to it.

“I don’t know if I’m going to be able to let that go for a while,” she said. “It’s that story of that suit and the fact that the story has taken on a symbolism that’s been important to me. It’s the question, ‘Can you do the job and be who you are?’ That’s the story, right?”