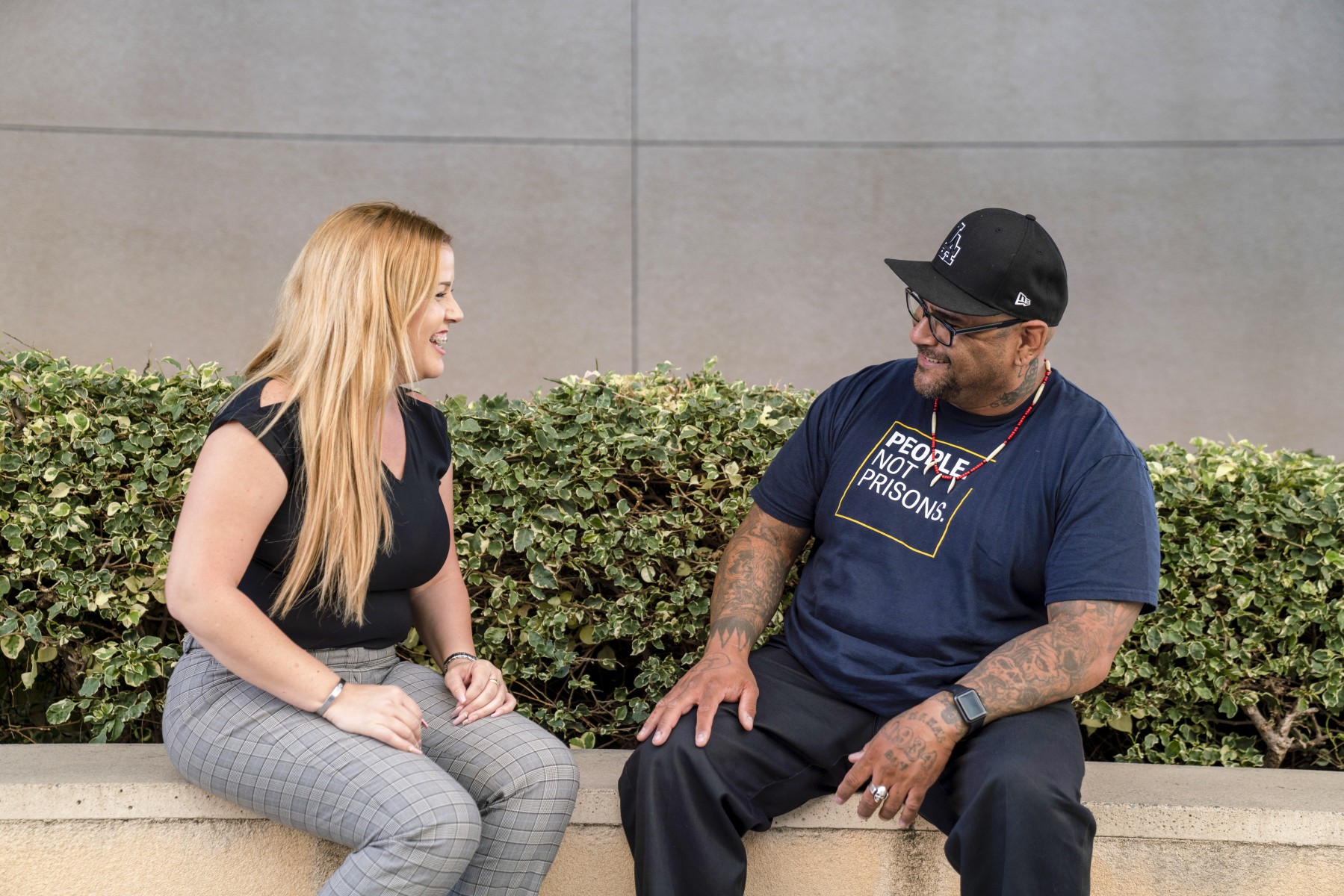 Martín Leyva (right) is the director of CSUSM's chapter of Project Rebound, which supports formerly incarcerated students. Maria Valdivia (left) will be part of the first cohort. Photo by Chandler Oriente

Xuan Santos has long advocated for increased representation at Cal State San Marcos of students who are formerly incarcerated or system impacted.

As Santos, an associate professor of sociology, was completing his tenure process two years ago, he began looking at ways to provide more support on campus. At the top of his wish list was bringing Project Rebound, a program that supports students transitioning out of prison, to CSUSM.

As part of his efforts, Santos visited San Diego State to meet with members of its chapter of Project Rebound. It was only then that he realized how daunting it would be working by himself to launch the program at CSUSM.

But Santos soon discovered that he wasn’t alone in wanting to see Project Rebound become a reality at CSUSM.

After a summer spent learning about SDSU’s program, Santos returned to the classroom in fall 2017 and told students in his Sociology 322 course, “Critical Perspectives of Gangs,” about his ambition. To Santos’ surprise, one of his students, Yomira Zamora, said she had been working toward that very goal.

“She showed me a folder with everything she had researched,” Santos said. “I thought, ‘Oh my goodness, I don’t have to reinvent the wheel. People are already working on this.’ ”

Santos, Zamora, Martín Leyva and numerous supporters from across campus are seeing that dream realized as Project Rebound launches this fall. The program is being led by Leyva, who received his Master of Arts in Sociological Practice from CSUSM in 2018 and is himself formerly incarcerated.

“You watch Martín work with students, you watch him work with formerly incarcerated people, and you see why we have what we have now,” said Christopher Bickel, an associate professor of sociology who was part of the search committee that selected Leyva. 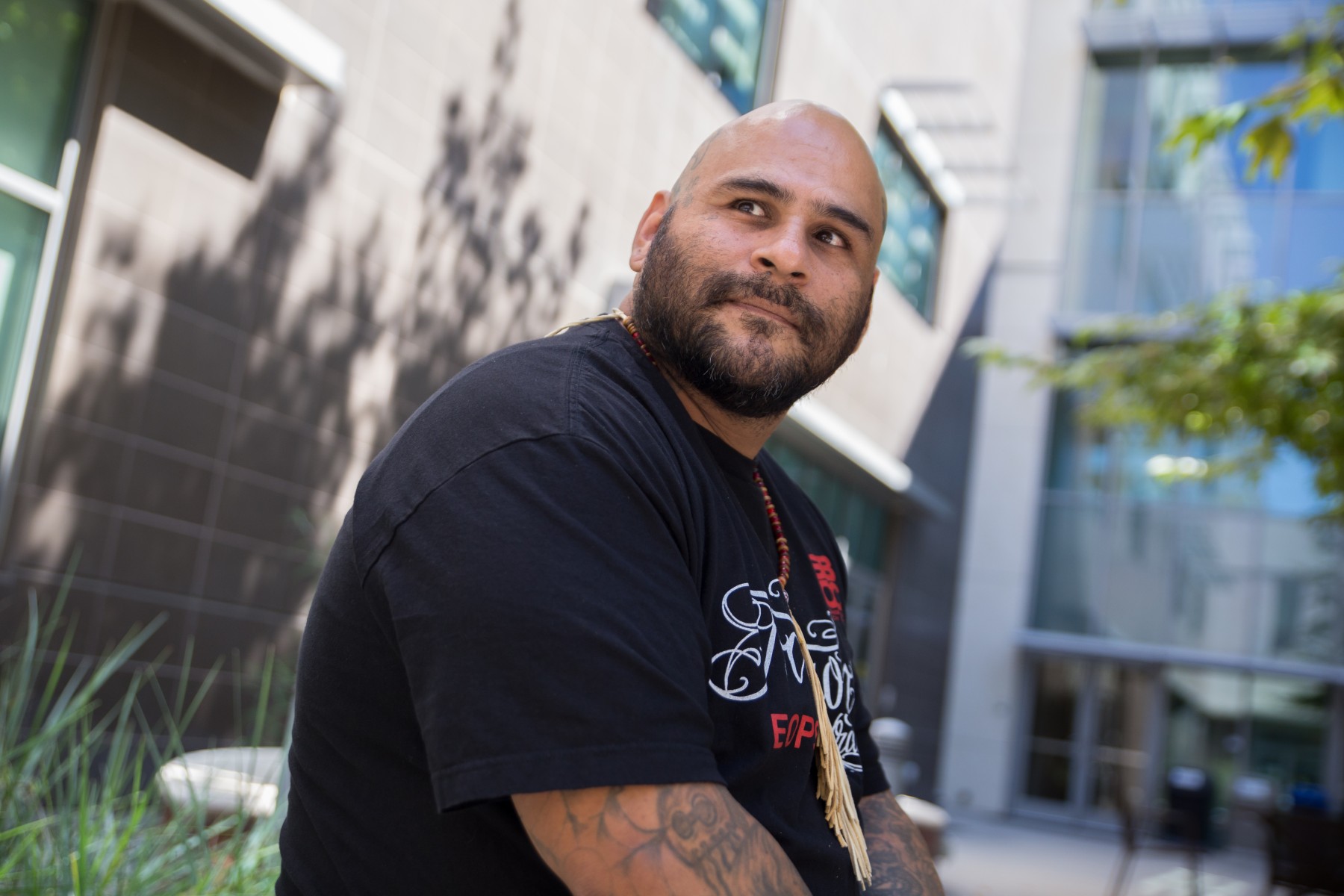 CSUSM alumnus Martín Leyva is the director of the university's new chapter of Project Rebound, which launches this fall. Photo by Christine Vaughan

Leyva anticipates about eight students for the first cohort, and while the program is just getting started, he has big plans. Among the initiatives he is working to implement are job fairs featuring employers that hire formerly incarcerated people, a book loan program, a mentorship program and fundraising to ensure that emergency funds are available for students in need.

“Ultimately, I want to be a one-stop shop where you can get help with a résumé, a cover letter or anything else you need,” Leyva said.

After spending two decades in and out of jail and prison, Leyva knows firsthand the challenge of transitioning from incarceration to college. It’s one of the reasons why he started the Transitions Program at Santa Barbara City College in 2008 and later did the same with the Transitions Collective at CSUSM, MiraCosta College and Palomar College. Both programs support formerly incarcerated students and their allies.

Zamora is one of those allies. She is system impacted, someone directly affected by an incarceration. Both of her older brothers spent time in prison as did her father, who was deported when she was 11 and remains in Mexico more than a decade later.

It wasn’t until Zamora was at CSUSM that she realized there was a community of people in a similar situation. She met Leyva and joined the Transitions Collective. She was also active in Associated Students, Inc., serving as the vice president of Student and University Affairs, and was the civic engagement officer for the Southern Region of the California State Student Association (CSSA) during the 2017-18 academic year.

It was while working with CSSA in May 2017 that Zamora first learned about Project Rebound. Despite already having a full schedule between school, ASI and CSSA, Zamora spent weekends, holidays and any extra time she could find to travel around the state to meet with legislators, conduct research and gather supporting documents. The work resulted in a robust binder that she refers to as the “Project Rebound Bible.”

“I don’t think we would be where we’re at if it wasn’t for the very strong leadership that she embodies,” Santos said.

Zamora eventually authored an ASI resolution to support a CSUSM chapter of Project Rebound, which passed unanimously. It cleared another hurdle in the Academic Senate, which also passed it unanimously.

“I cried both times it passed,” said Zamora, who graduated with a bachelor’s in criminology and justice studies in 2018 and was recently accepted to California Western School of Law. “Not just for myself, but to see that there could be an opportunity for my brothers to go back to school.”

Project Rebound was officially recognized once it was determined that it would reside in Student Academic Support Services (SASS) under the guidance of Geoffrey Gilmore, associate vice president of SASS. Lorena Checa, vice president of Student Affairs, also provided a critical grant to help launch the program.

I think we will be a leader in the nation, especially with Martín at the helm, of creating that prison-to-school pipeline.

One of Zamora’s biggest fears upon graduating was that other students wouldn’t continue fighting for Project Rebound. But those fears were allayed as Transitions Collective, led by Nayeli Gonzalez last year, continued to host events and spread awareness.

This year’s incoming president, Alexandria Hernandez, said it wasn’t until she joined Transitions Collective that she felt comfortable sharing her story, and she expects Project Rebound will do the same for others.

Alexandria, who will graduate next May with a double major in criminology and justice studies and child and adolescent development, was arrested just weeks after her 18th birthday and charged with a DUI. Alexandria wasn’t a drinker, but she had been dealing with relationship issues and began drinking with friends. Despite having a designated driver, she insisted she could drive home. She was arrested after her car struck a gate.

Alexandria was booked into jail and transferred to Las Colinas Detention and Reentry Facility in Santee. Though her time in jail was brief – she was released after a day – the stigma of being arrested was not easily shaken.

“I never liked to talk about it because I felt embarrassed,” Alexandria said. “I had let a lot of people down and I knew that I should have thought my night out better.”

“This is about community,” she said. “This is about empowering each other. It’s not about judging people on their past. People can grow.”

Bickel said Transitions Collective members were instrumental in bringing Project Rebound to campus. The group conducted numerous surveys that helped illustrate the need for a program like Project Rebound at CSUSM. The survey results provided a better idea of the high number of students who are either formerly incarcerated or system impacted while also showing a desire among students for a formal center, more resources and academic advising.

“Everything that was mentioned matched with what Project Rebound offers,” Zamora said.

Bickel said CSUSM’s community-engaged culture has been critical. He noted that Project Rebound organizers have received support across campus – from Community Engagement to the Library to Counseling Services, among others.

“I’m a pessimistic person,” said Bickel, who used to teach at the federal penitentiary in Lompoc. “You do prison work, you tend to get very pessimistic. But ever since coming to CSUSM, and the way that we’ve responded in the community here, it has been nothing short of remarkable. And I think a lot of this is attributable to – and he’ll hate me saying this because he’s a remarkably humble person – but Martín is a big part of all of this.

“I think we will be a leader in the nation, especially with Martín at the helm, of creating that prison-to-school pipeline.”