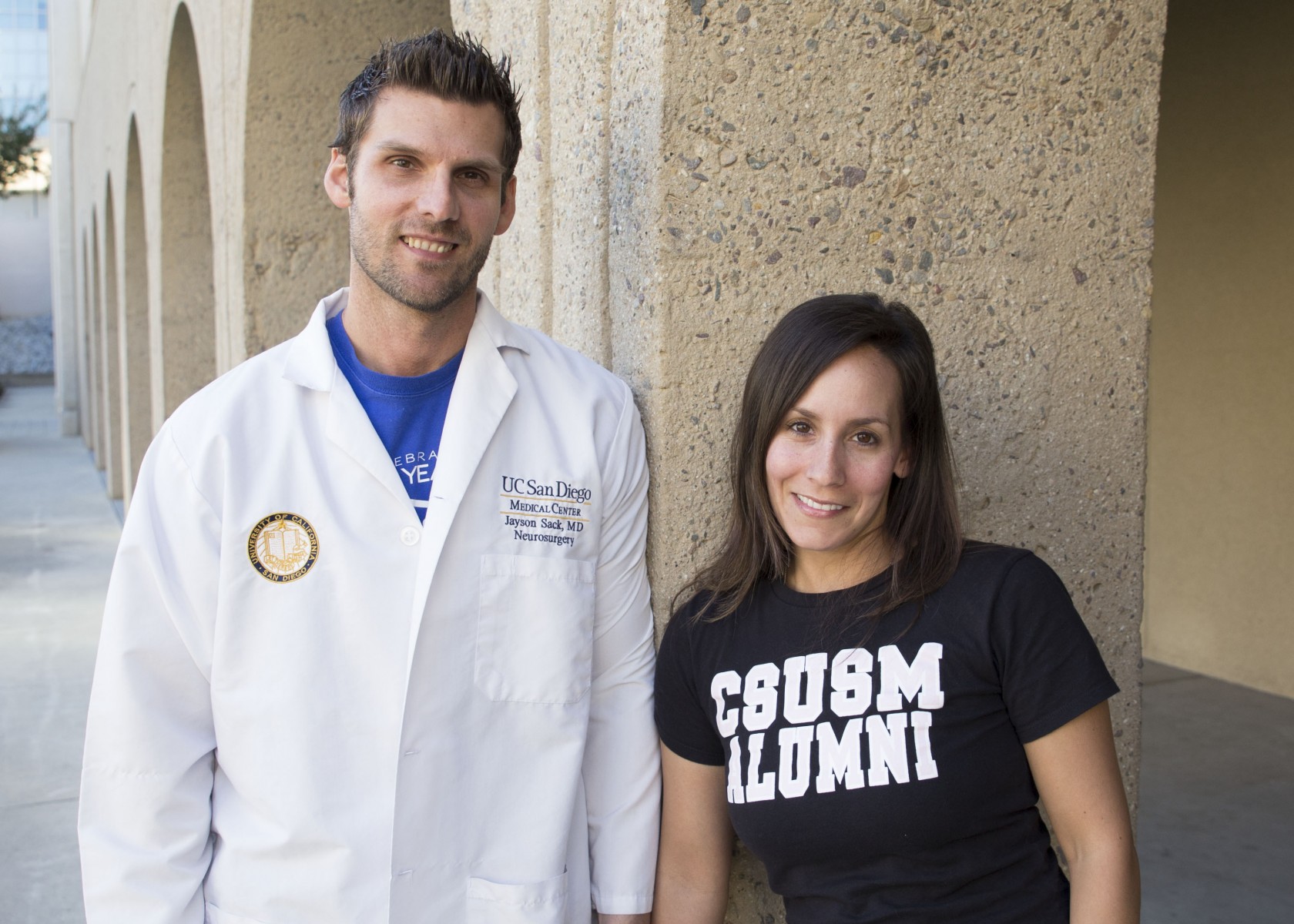 The brain is one of the most complex and magnificent organs in the human body. Neurosurgeons train for a minimum of 15 years—including four years of undergraduate study, four years of medical school and seven years in a residency program—to garner the knowledge and experience necessary to diagnose and treat conditions that affect not only the brain but the spinal cord, peripheral nerves and their supporting and surrounding structures.

To be sure, practicing neurosurgery—arguably one of the most elite fields in medicine—requires not only sustained dedication to the field but confidence, patience and methodical preciseness. These qualities certainly apply to CSUSM alumnus Dr. Jayson Sack, chief resident of neurosurgery at UC San Diego Medical Center.

CSUSM: The Foundation for Love and Neurosurgery

Some people know from a young age that their professional calling is medicine, but for Jayson that wasn’t always the case. As a high school student with feelings of uncertainty over the future, he declined to take college admission exams and instead enrolled in a local community college. After two years the La Mesa native transferred to Cal State San Marcos. 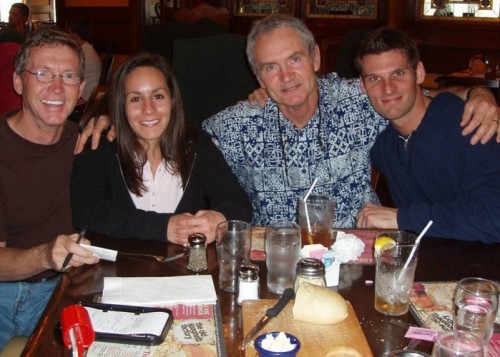 “I remember feeling like this was a place, with small class sizes and plenty of opportunities to get involved, where you wouldn’t be treated like a number—where professors would care about you and provide individual attention,” he said.

Initially he majored in psychology, thinking that his career would lead him to psychiatry, but a neurobiology course sparked his imagination and interest in neuroscience. With classmate Andy Mauldin and under the guidance of Psychology Professor and Health Professions Advisor Joanne Pederson, Jayson co-founded the CSUSM Pre-Health Society and became a double major in psychology and biology with a minor in chemistry.

“Jayson sought me out in the fall of 1999 and became a frequent visitor to my office,” said Pederson. “I have a flashbulb memory of our first meeting—it was clear to me that he had incredible passion for academics and focus for his career development, but it went beyond personal gain. He was, and still is, the type of person who finds something that needs to be improved and does the work to set things right or make things better.”

In 2004, the year that both Jayson and Shilow graduated from CSUSM, Jayson earned the President’s Outstanding Graduate Award, the highest University honor bestowed annually to a graduating student in recognition of scholarly excellence. He applied to and was accepted at several medical school, ultimately selecting the University of Michigan.

Biological Sciences Professor Richard Bray wrote in a letter of recommendation, “Of the thousands of biology majors I have taught and hundreds of letters I have written, I regard Jayson among the top five students in terms of intelligence, passion for helping people and promise to develop a very productive career.”

At the University of Michigan Shilow earned a master’s degree in education while Jayson acquired both a M.S. in clinical research and a M.D. 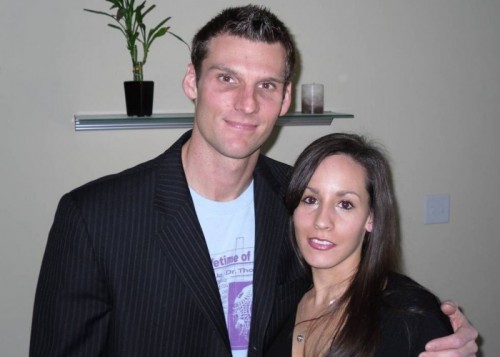 On Match Day—the day when fourth-year medical students across the country find out where they will spend their residency—Jayson proudly wore for good luck a memorial T-shirt featuring the late Microbiology Professor Thomas Wahlund, one of his CSUSM mentors.

“The faculty at CSUSM really motivated me and encouraged me not to look back,” Jayson said. “Dr. Wahlund in particular inspired me with his work ethic. He once said to us in class, ‘If you aren’t going to give it 100 percent then get out.’”

In fact, when Jayson and Shilow got married, their wedding venue of choice was The McMahan House at CSUSM. Guests included University faculty and staff who, over the years, had become like family to them.

After medical school Jayson and Shilow moved to Tampa, Fla. for Jayson’s neurosurgery residency at Tampa General Hospital. But just a few years later, they relocated back to San Marcos after their daughter was born prematurely and they needed to be closer to family. Jayson was accepted to UCSD’s neurosurgery residence program as a third year resident —not an easy feat for the highly competitive program that typically only accepts two first-year residents a year. In 2014 he was promoted to chief resident a year early—a testament to his leadership and expertise.

Life as a Chief Resident

In the ICU
Conducting a beside procedure in the Intensive Care Unit with a co-resident at Tampa General Hospital
In the Operating Room
Conducting surgery at Rady's Children's Hospital under the microscope.

Jayson arrives at the Hillcrest-based UC San Diego Medical Center daily at 6 a.m. for rounds and often doesn’t leave until the evening. As the senior resident, he holds a position of leadership. By 7:30 a.m. he is in the operating room, acting as the primary surgeon. Following surgery, he is responsible for assisting junior colleagues with patient care—assigning them to tasks and specific cases—and he oversees all patients on the service. By 6 p.m., if Jayson is lucky, he heads home… but that doesn’t mean he won’t receive calls after hours or on the weekend, requiring him to immediately access a patient’s status remotely or to head back to the operating room.

Dealing with life and death on a daily basis means that in his line of work there is a very minute margin of error and the pressures can be extreme.

“I have to stay somewhat detached from what happens in the OR,” he reflected. “The hours and the pressure are intense but the reward is great—I can’t imagine making more of a difference in the lives of people than I do now. But at the end of that day, what is most important is my family.”

Today, not only is Jayson and Shilow’s daughter a thriving five-year-old, but they recently welcomed the addition of their second daughter in January 2015.

A Return to Roots...And a Bright Future Ahead

After teaching high school math and science, Shilow returned to CSUSM as a First-Year Program lecturer, teaching a required seminar course that supports first-year students in their transition from high school to the world of higher education.

Meanwhile, Jayson serves on the Dean’s Advisory Council for the College of Science and Mathematics (CSM).

“As a native San Diegan, Jayson provides a unique perspective to what our college can and should be doing for the region,” said CSM Dean Katherine Kantardjieff. “Moreover, as someone who considers his time at CSUSM paramount to his personal development and in preparing him for a career in medicine, Jayson truly understands and champions our mission, vision and values.”

Following Jayson’s final year of residency, they plan to relocate back to south Florida so that Jayson may complete a skull base fellowship with world-renowned Neurosurgeon Harry Van Loveren at Tampa General Hospital.

But what advice does Jayson have for current CSUSM students interested in a career in medicine? He suggests that students dig deep and consider why they want to become a doctor.

“And be proud of where you come from,” added Shilow. “We’ve always felt enormously proud to represent CSUSM. At Cal State San Marcos not only are you receiving an outstanding academic foundation but people really care about you.”