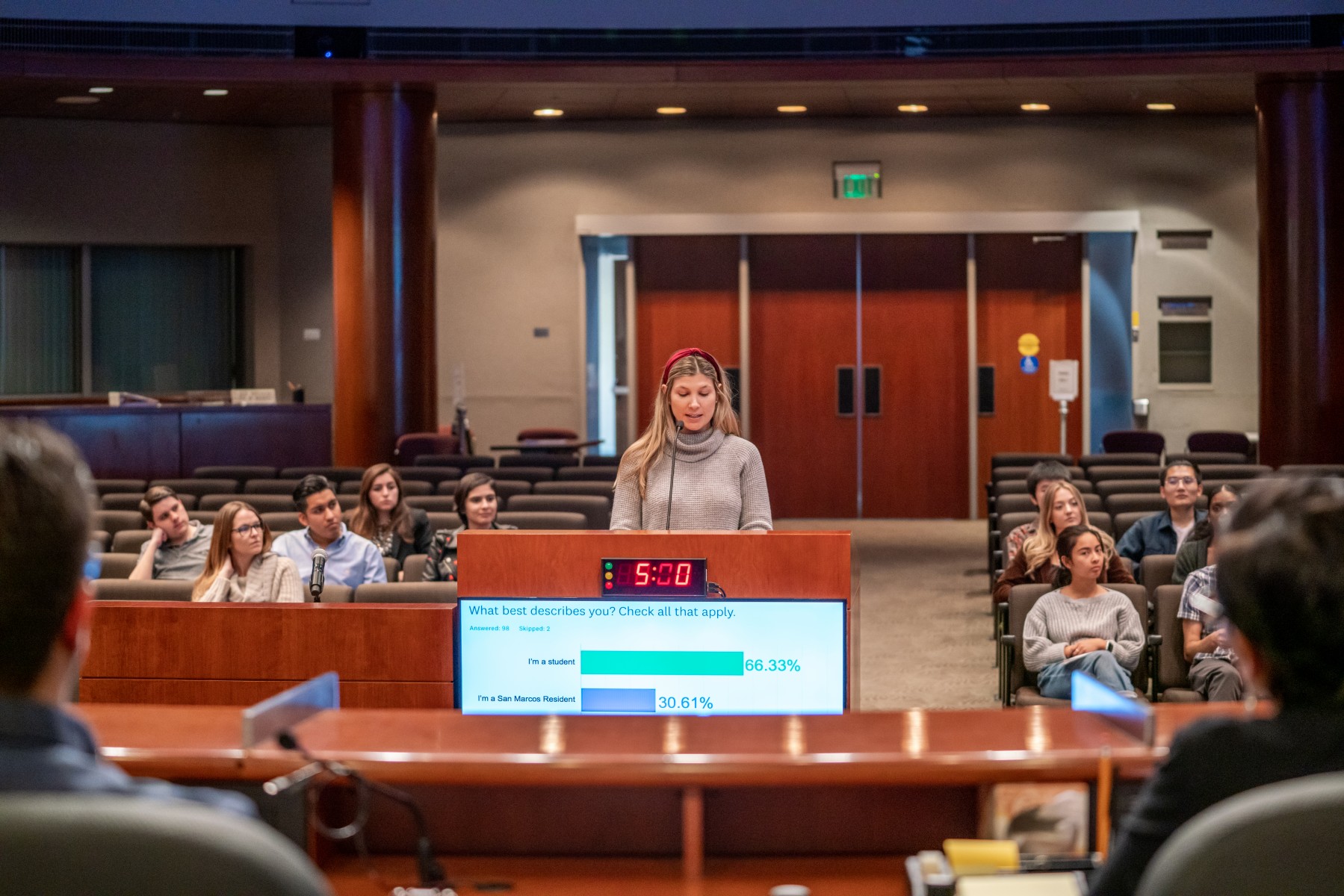 When San Marcos city officials were looking for guidance on how to proceed with their plan to install public art in the emerging North City neighborhood, they knew just where to turn.

They went to their trusted community partner in Cal State San Marcos and tapped into the collective brainpower of 25 Art, Media and Design majors.

Last month, members of the upper-division class Art and Social Change, taught by professor Kristin Moss, culminated a semester-long project by presenting to city officials and North City developers their 74-page plan that will serve as a blueprint as San Marcos begins thinking about how to beautify the neighborhood that’s springing up across Barham Drive from the university.

“I think a lot of our students want to be involved in their communities, they see social problems that they’re facing, but they don’t have a real understanding of how to become involved, how city government works,” Moss said. “This kind of civic learning really expands their horizons, shows them the kind of jobs and fields they could be a part of.”

That, in a nutshell, is the mission of Democracy in Action, a program through which CSUSM faculty and students team with a local city government to conduct research, gathering qualitative and quantitative data to benefit city projects that are backlogged or need extra attention.

Democracy in Action is the brainchild of Scott Gross, CSUSM’s associate vice president for community partnerships, who modeled it after a University of Oregon initiative called the Sustainable City Year Program (SCYP). In the SCYP, Oregon picks a different government partner each year and selects professors and students to lend their talents to up to 50 separate projects that require assistance.

Gross knew that CSUSM couldn’t match the scope of the SCYP, but he appreciated the concept behind the program. And instead of sustainability, he decided to focus on civic engagement.

“When we talked to the city of San Marcos and other cities in our area when we were initially conceiving of the program, they all talked about how no one thinks about working in city government. It’s an invisible sort of thing,” Gross said. “It became clear that they were looking for two things: a career pipeline and for students to become more involved in the process of city government.

“It’s not that we dislike sustainability. It’s just that this is what the cities articulated as their need.”

Democracy in Action launched in spring 2017 with San Marcos as the partner and four class projects as the pilot, including ones involving emergency medical services and storm water. Two more classes followed in each of the next two semesters, but then the program took a hiatus as Gross tried to shop it to a different city, as the Oregon model had established.

When that didn’t work out, the original partners came together again after Tess Sangster, San Marcos’ economic development manager, approached Gross with a fresh idea. The city had more than $1 million to spend on public art through a fund supplied by developers, and her boss, city manager Jack Griffin, was keen on returning to the Democracy in Action well. Why not revive an arrangement that had served both parties so richly? 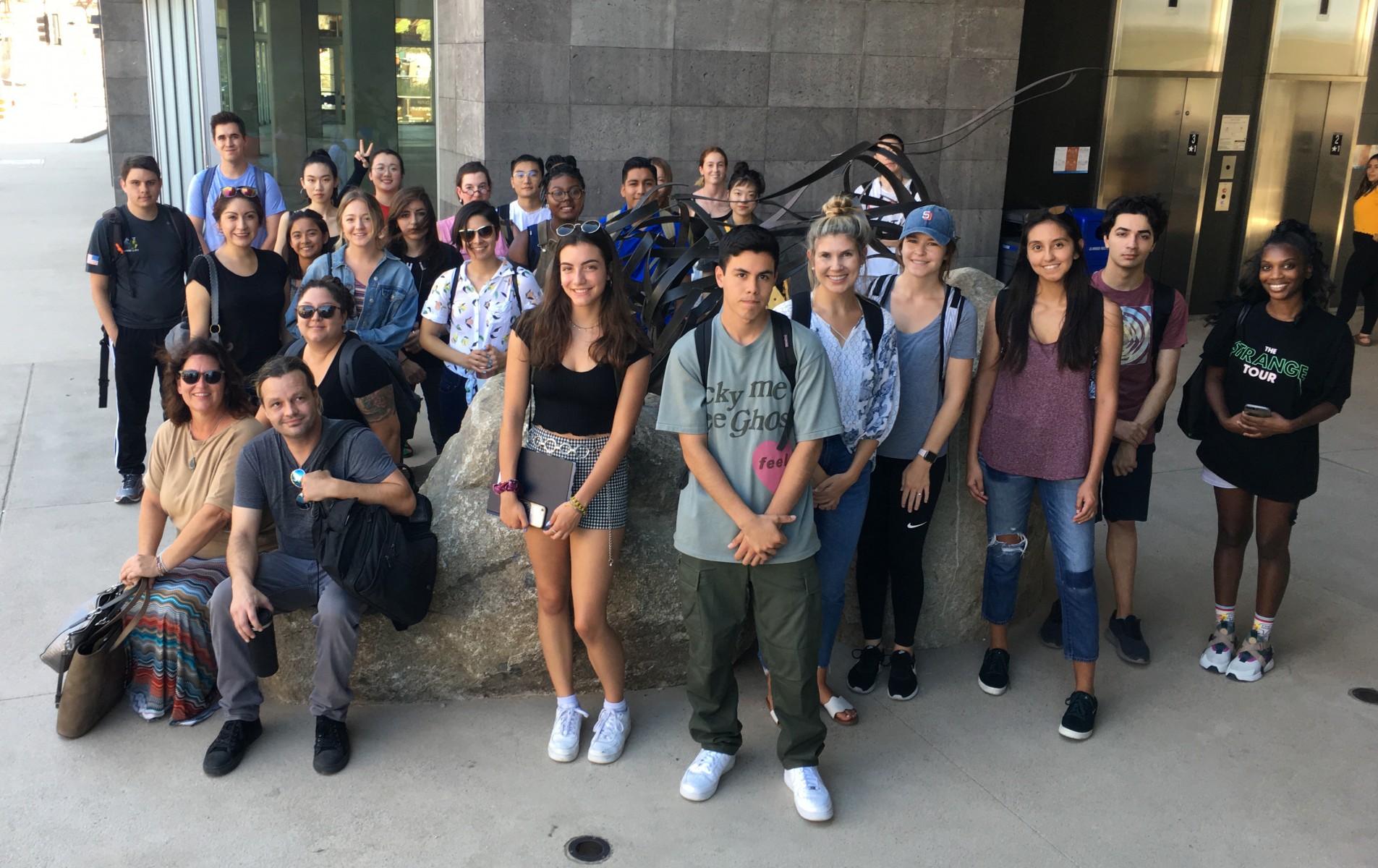 “I hemmed and hawed about it because it’s not the program model,” Gross said. “If you look at the University of Oregon, they have a partner and after a year, they’re done. But when I thought more about it, these types of programs and the work that we do in Community Engagement is all contextual. It depends on the circumstances of our partner. If the city has a project and they’re interested, why wouldn’t we do it? It doesn’t make sense to say no.”

As with previous iterations of Democracy in Action, the one last semester kicked off with a launch event in which Moss and her students met San Marcos Mayor Rebecca Jones and members of the City Council and toured City Hall while learning about the functions of local government in small-group conversations with city representatives. At the outset, the class also huddled with Griffin and the two chief developers behind North City to get a better feel for the area and the direction of the public art project.

Moss estimated that 70 percent of the course syllabus was devoted to Democracy in Action work. Students were separated into groups to tackle the issue from multiple perspectives; there were categories for artistic practices and approach, project management, community involvement, environment and resources, and site and context.

Under Moss’ guidance, they conducted a survey that reached both the campus and surrounding community, they examined the public art plans of other cities, and they even did some design work. In October, Sangster and one of the developers came to the classroom for a project check-in.

“It was very much how it works with real consultancy, where they had gone in some directions that were great and some that were maybe a little off base from what we were looking for,” Moss said. “So they adjusted and tweaked the scope of the project.”

Said Sangster: “I think that pushback was healthy for them. Because that’s what happens in real life. Not everything is going to be exactly right the first time.”

Now armed with the final report from the art class, Sangster said city officials will meet this month to start plotting out what the North City public art plan might look like. Students got what they were seeking from the project as well.

“I’m very grateful for the chance to work with Democracy in Action as a college student and see how being an art major can also correlate with city planning,” said Addalee Lyon, a third-year student who helped present the report to city officials last month. “It was a great opportunity to start the conversation of how we can enhance the city while taking the public’s opinion into consideration.”

Democracy in Action will resume this semester with a partnership between liberal studies professor Elizabeth Ridder, who teaches a course about national parks, and the San Marcos parks and recreation department.

“What makes me most excited about Democracy in Action is that students are reticent and a little skeptical at the beginning of the semester when they hear what they’re about to engage in,” Gross said. “And by the time they get to the end, they are often more passionate about the project and about city government than they ever imagined they could be. There’s this little fire that’s been lit inside them.” 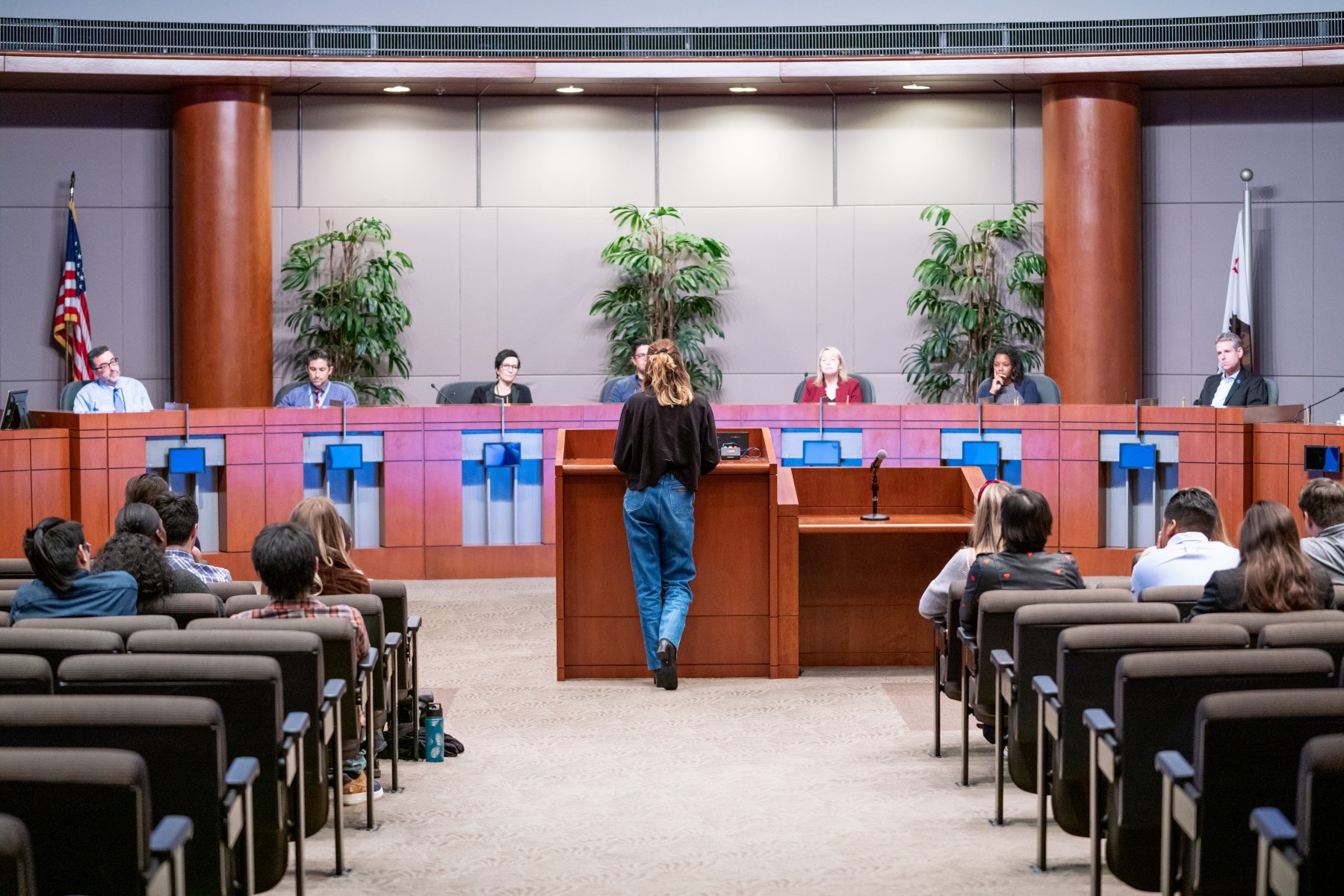 “It was a great opportunity to start the conversation of how we can enhance the city," said Addalee Lyon, a CSUSM Art, Media and Design student pictured giving a presentation to San Marcos city officials last month. Photo by Chandler Oriente