Ready to Show Support for Science 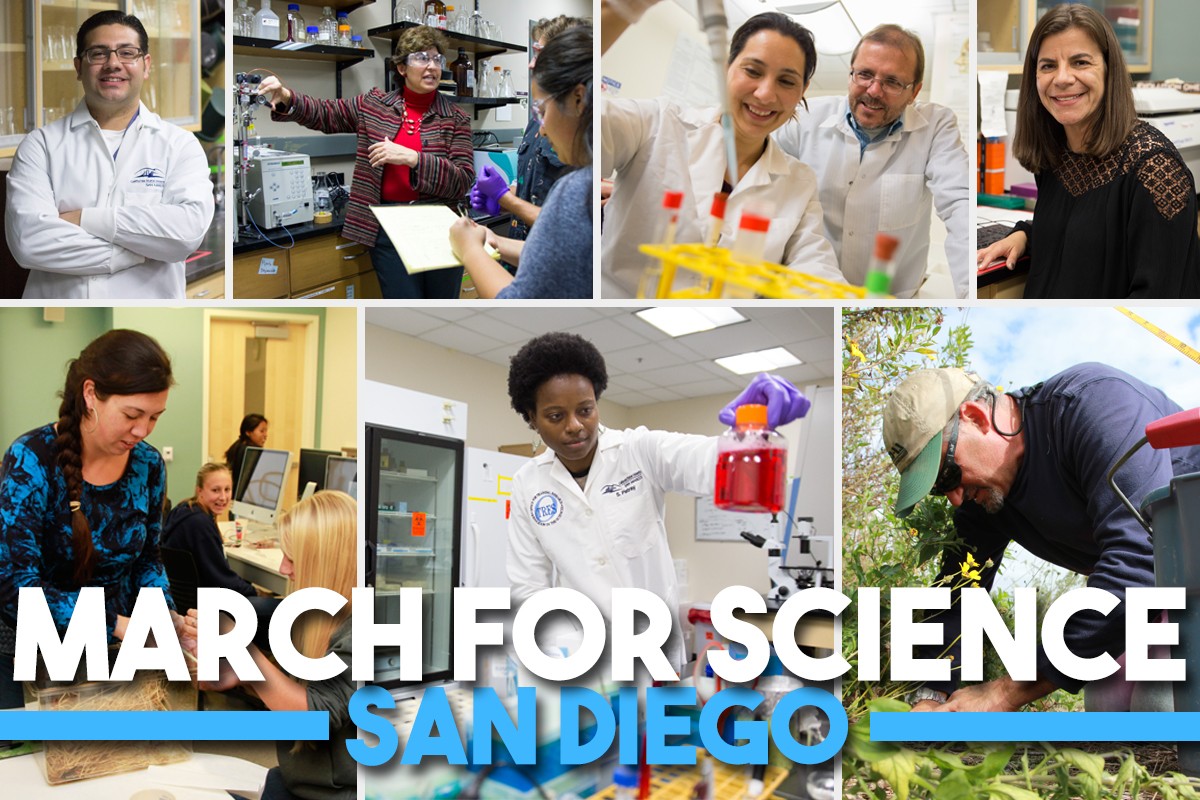 Angelica Rocha has had a lifelong passion for science.

As a young girl, while many of her peers were reading Teen Magazine, Rocha was immersed in the science section of periodicals such as Newsweek.

“Imagine my excitement when I grew up to learn that there were entire stacks of a library dedicated to peer-reviewed research journals filled to the brim with the latest medical and technological advances, insight to understanding the workings of our brain, and human behavior,” said Rocha, a Research Associate and Assistant Director for Student Support in Cal State San Marcos’ Office for Training, Research, and Education in the Sciences (OTRES).

Rocha doesn’t visit the library as often these days, instead relying more on online library database searches. But her enthusiasm for science hasn’t waned.

Rocha will be celebrating her love for science on Saturday when she participates in the March for Science San Diego. The event is one of more than 400 planned around the world, including the centerpiece event in Washington, D.C.

The March for Science is being billed as the first step of a global movement to highlight the vital role science plays in health, safety, economies and governments.

Rocha is on the organizing committee for the San Diego march, which is a nonpartisan group of scientists, engineers, students, teachers and science enthusiasts united by an appreciation for science in people’s everyday lives.

Festivities begin with featured speakers at 10 a.m. Saturday at the Downtown San Diego Civic Center Plaza at 1200 Third Ave. The one-mile march to Waterfront Park (1600 Pacific Highway) begins at 11 a.m. and there will be additional speakers and a science expo at Waterfront Park from 12:30-2 p.m.

Rocha helped secure speakers for the event, including three from CSUSM – Bianca Mothe, associate dean for the Office of Undergraduate Studies and a professor of biological sciences; Sharon Patray, a biochemistry student; and Kevin Tenerelli, a biology student.

“Science is not at the forefront of people’s attention anymore, but it should be because that is what is going to improve health and the human condition,” Mothe said. “Almost everything that you consume is somehow related to science at this point. Everything from our phones to new materials that go into the things that we carry to the computers that we’re on every day to things that we eat. Once the emphasis goes away from that, how is the human experience going to be affected?”

Kevin’s passion for science derives largely from seeing his 6-year-old daughter’s battle with Septo-optic dysplasia, which includes an underdevelopment of the optic nerve, pituitary gland dysfunction and some structures connecting the two hemispheres of the brain. As it has for Kevin’s daughter, it can cause blindness.

“Science, from a biomedical research point and perspective, has helped me deal with my daughter’s disabilities,” said Kevin, who graduates from CSUSM in May and will then begin work as an M.D./Ph.D. student in UC San Diego’s School of Medicine. “It empowered me to realize you don’t have to be fearful of these things. People are doing research, and it’s important to do this research.

“This is a crucial time to support science.”

Similar sentiments were voiced by other CSUSM students planning to participate in Saturday’s event.

“We’re trying to increase awareness of how science isn’t fake and we’re trying to open up the community to what we do,” said Veronika Espinoza, a biochemistry student. “We’re curious, and we want to find the answers to all of life’s possibilities.”

At a time when budget cuts are being proposed at the federal level, Abraham Escobedo also emphasized the importance of funding to the work being done by scientists.

“We need resources to find answers,” said Abraham, a graduate student in psychology. “Sadly, a lot of people manipulate that into an idea that we’re just wasting money, which is not true.”

Rocha expects Saturday’s festivities to be a peaceful, positive, uplifting, family-friendly celebration of science. As it is also Earth Day, she is encouraging attendees to be conscientious of their environmental impact by carpooling if possible and considering repurposing cardboard or other materials to create signs.

“Science impacts every part of our lives, no matter our age, race, gender, sexual orientation or political party,” Rocha said. “From medical advances and improved technologies to clean air and water, we all benefit from science.

“Our nation needs science in order to thrive. Science allows us to discover, explore and understand the world around us. We need to stand for science. Not because science needs us, but because we need science.”

“I am participating in the March for Science to support science and my fellow scientists. Science improves every aspect of our lives and its contributions should be celebrated. In order to continue the advancement of science, we need to increase funding for research, which requires the public to appreciate its benefits. We seem to be failing here because science deniers are being elected to public office. Policies that neglect scientific evidence and budgets that decrease funding for science will have a negative impact on the future of our nation and our planet. I am also marching to resist these policies.”

“We are joining in the cognitive dissonance with our scientific community in order that our individual voices can be heard. Science is how we function in the 21st century; from the immunizations we received in early childhood to the satellites orbiting the planet that allow our phones to communicate with the world daily. We find it ironic that one of the richest countries in the world would consider defunding the science research and development which brought us to our standing in the first place. It is through the support of research that scientific applications have brought us to our modern day society.”

“I am marching because all people in our society (not just scientists) need to understand why science, truth and facts matter. It matters not only to make our lives easier, safer and longer … but matters because scientific inquiry and discovery is centered on finding the truth. The current socio-political climate has, unfortunately, validated the rejection of scientific findings, not based on data to the contrary but based on feelings of distrust, incompatibility with religious views, or worse … for economic profit. We must do a better job at educating the public on how science works and how the scientific community comes to accept certain principles. We must come out of our ‘laboratories’ and become activists for truth and fact!”

Professor, Department of Chemistry and Biochemistry

“I am planning on participating in the March for Science because I think it’s the patriotic thing to do. Our nation was founded based on ideas from the Enlightenment, on the idea that humans working freely, communicating freely, and experimenting freely could come up with better understandings and better ways of organizing ourselves than those handed down by tradition and authority. Benjamin Franklin, one of the most influential of our founding fathers, was, among many things, a scientist. Today, there is a lot of doubt as to whether our national government, at its highest levels, really supports the spirit of free inquiry and seeking after the truth that guided our founding fathers. I’m participating to show support for that spirit and those ideas.”

“I march for researchers, without whom the screening methods, diagnostic tests and therapeutic drugs we have today would not be possible; for teachers and professors who share their knowledge and inspire our future leaders to pursue their passions; for my grandmother as well as all of my family and friends who have had to face a disease diagnosis; for the patients who I impact every day through my work; and finally (fitting that the coming week is National Lab Week) I march for my fellow laboratory professionals who are the unseen heroes behind every diagnosis.”

Professor, Department of Chemistry and Biochemistry

“I feel the current administration is politicizing science and scientific progress to an unacceptable extent. Our country relies on having a steady stream of scientific breakthroughs to continue our progress toward curing diseases, advancing technology and understanding the world around us. We need to insist that genuine scientists be in charge of scientific endeavors in the U.S., and that results are not censored or even changed to suit the will of a political leader.”

“First of all, I am not one who normally participates in marches, in fact this will be my first. However, I am so disheartened by the posture of our elected representatives as they fully assault the scientific community with their ill-informed and partisan conspiracy theories. Contrary to their beliefs, the scientific community does not have a partisan ax to grind. We are entrusted with taxpayer support to assess how the natural world operates, and we use these resources as objectively as possible to answer the questions that we are tasked to address. It is not our fault that our elected officials do not like the answers that they are receiving from our research, but it is our problem when they use their position of power to quiet the scientific community and stifle intellectual progress. We have so many pressing scientific problems that need to be addressed, and the current administration’s efforts to reduce funding, conduct smear campaigns, and spin ‘fake news’ conspiracy theories about the ‘hidden agenda’ of the scientific community is a cunning and effective strategy to distract society on the need to deal with these pressing problems. So, I am marching because we, as a community, must band together and confront this tide of ignorance and partisanship. Our response must be loud, united and resounding, so these forces understand that we will not let them hijack science and stifle the scientific progress that is urgently needed to address the multitude of problems facing society.”

Ready to Show Support for Science