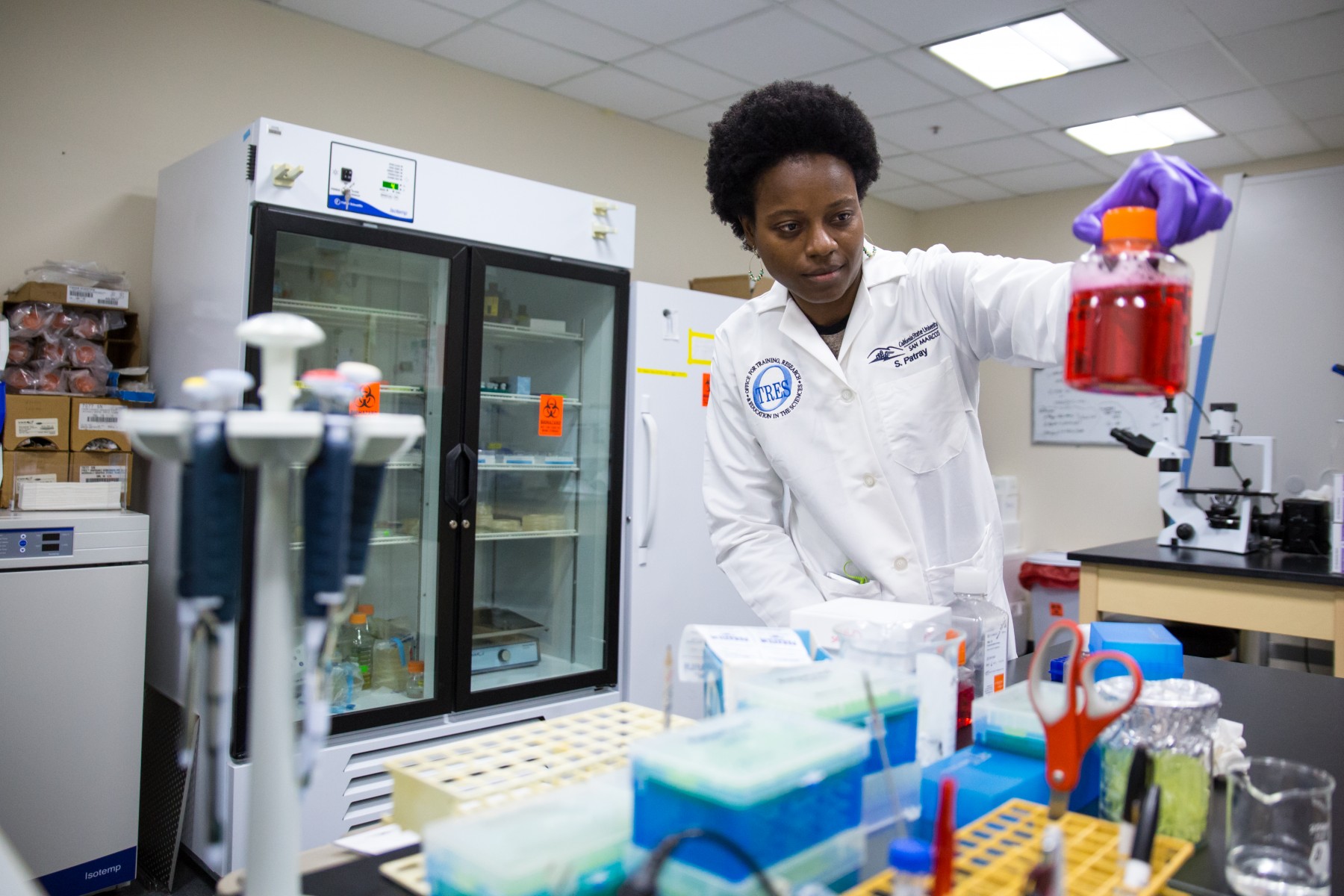 Sharon Patray
CSUSM student Sharon Patray is graduating in May with a bachelor's in biochemistry before setting off for a Ph.D. program at Johns Hopkins University in Baltimore this fall.

Nearly a decade as a refugee after fleeing a brutal civil war? Check. U.S. Marine combat engineer in Iraq and Afghanistan? Check. Promising biochemist who has been accepted into among the most prestigious research institutions in the world? Check.

Meet Sharon Patray, who will walk across a stage at Cal State San Marcos on May 20 to receive her Bachelor of Science Degree in Biochemistry before setting off for a Ph.D. program at Johns Hopkins University in Baltimore this fall.

“A day doesn’t go by where I don’t look back at my experiences and think about how fortunate I am,” Patray said. “Even when I’m pumping gas into my car at the gas station, I think, if you would have told me when I was a kid that I would even have my own car, I wouldn’t believe it. Where I came from, only rich people had cars.”

How did she do it?

“She is a role model for my other students in the lab,” Jayasinghe said. “They see what she has done, where she has come from, and where she is going to.”

Born in the Liberian capital of Monrovia, Patray fled with her mom and most of her family to Ghana during the first Liberian Civil War, a conflict that left more than 600,000 people dead from 1989 to 1997. She was 6 years old when she left her homeland, and she would spend much of the next nine years in a refugee camp.

At the age of 15, Patray landed in Rochester, N.Y., to live with her father. Although she earned a fully paid scholarship to study engineering at Clarkson University, a private research institution near the Canadian border, Patray could not capitalize on the offer because she had not yet become eligible for a green card from what was then known as the Immigration and Naturalization Service. Instead, she enrolled at Monroe Community College in her adopted hometown of Rochester. After one year at Monroe, she enlisted in the Marines.

“A friend of mine was joining the military and I thought it would be fun, so I saw a recruiter,” Patray said. “He told me the military would pay for my education and help me secure my green card.”

Patray’s eight years as a Marine combat engineer included everything from building bridges in Japan to clearing routes in Iraq and Afghanistan. When she left the service, she moved to Oceanside, enrolled in MiraCosta College, and continued along her path of academic excellence. Patray began looking at her options, but after her experiences as a combat engineer, she quickly crossed engineering off her list as possible career choices.

“I was thinking about becoming a physical therapist, and had to take a Biology 101 course, and I loved it. I absolutely fell in love with biology. So, I started taking more biology classes, and naturally that led me to chemistry classes, so I changed my major to biochemistry.”

She hasn’t looked back. Patray, now 32, earned two associate degrees from the Oceanside college and took part in the Bridges to the Future Program, a partnership between MiraCosta, CSUSM and Palomar College that is designed to prepare students from underrepresented communities for careers in biomedical research.

“I had some great teachers, some great mentors at both MiraCosta College and Cal State San Marcos who told me I could be a great biochemist and provided me with the support and resources to succeed,” Patray said. “They have been my family since I decided to go the science route.” 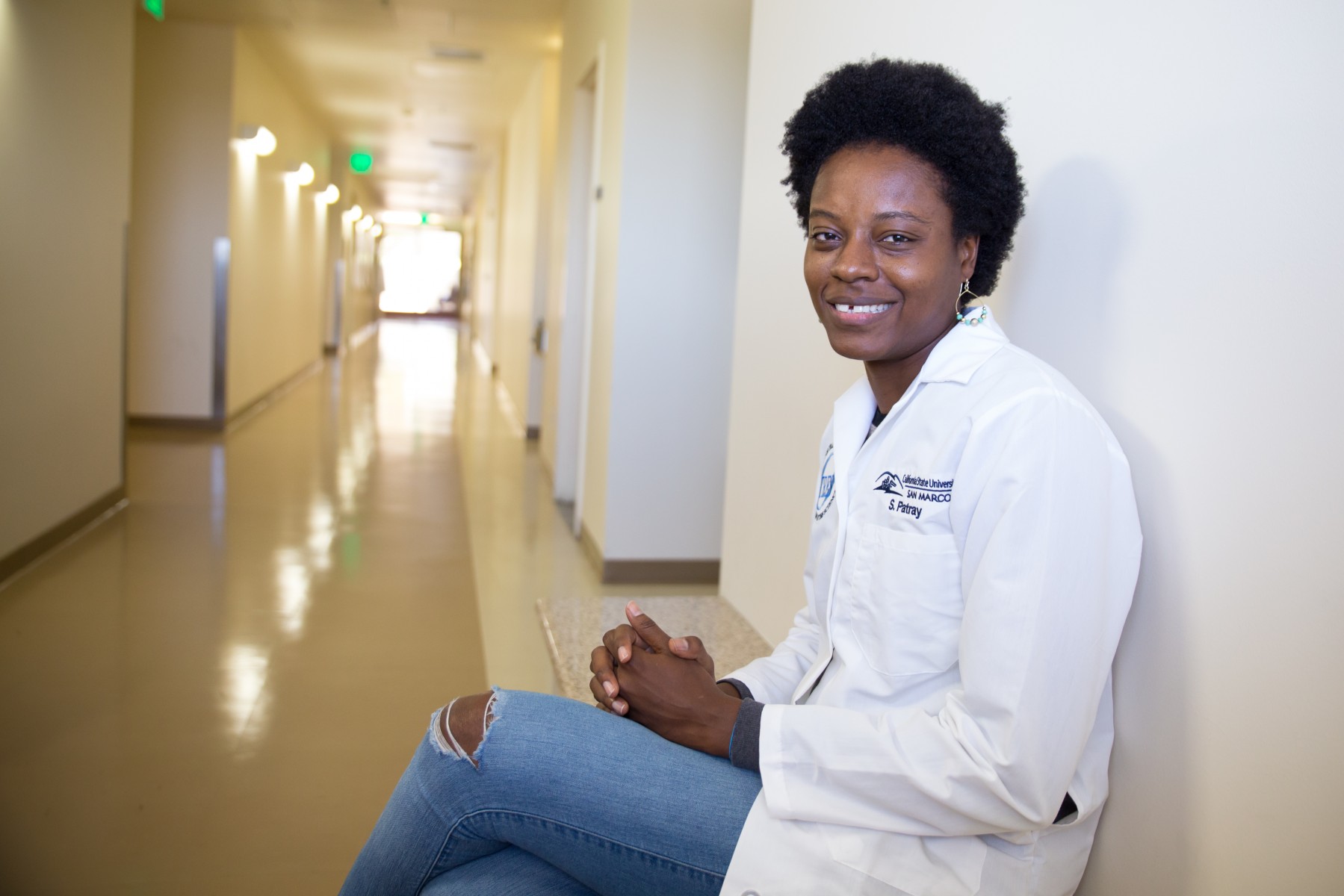 Sharon Patray
CSUSM student Sharon Patray is graduating in May with a bachelor's in biochemistry before setting off for a Ph.D. program at Johns Hopkins University in Baltimore this fall.

It was also while she was at MiraCosta that Patray was introduced to the OTRES program, an acronym for the Office for Training, Research and Education in the Sciences. All of which meant that when Patray enrolled at CSUSM, she was ready to take flight. She was accepted into the competitive Research Initiative for Scientific Enhancement (RISE) Program in 2014. Through OTRES, Patray took part in a 2015 Summer Research Experiences for Undergraduates program at Johns Hopkins University, where her work focused on isolating mycobacteriophages, which can be manipulated and are useful in understanding mycobacterial infections in people.

In 2016, she took part in the California State University-Louis Stokes Alliance for Minority Participation program, a statewide effort dedicated to broadening participation in STEM disciplines. She also has presented her work at national and regional conferences such as the Annual Biomedical Research Conference for Minority Students (ABRCMS) and the CSU Program for Education & Research in Biotechnology (CSUPERB). And she is an active participant in the American Chemistry Society Club and the American Association of University Women.

Perhaps most impressive, Patray co-authored a peer-reviewed article in the journal Intrinsically Disordered Proteins while still an undergraduate student at CSUSM.

“She is highly motivated, and her desire to learn will take her far,” Jayasinghe said.

This coming fall, Patray will be entering the first year of her Ph.D. program at Johns Hopkins. She is aiming for a possible career with the Centers for Disease Control and Prevention conducting the kind of virus-related research that will save lives.

But first, she’ll be speaking at the April 22 March for Science in San Diego, part of a series of nationwide events supporting science and research.

“We have come so far,” Patray said. “We can’t let people turn us back.” 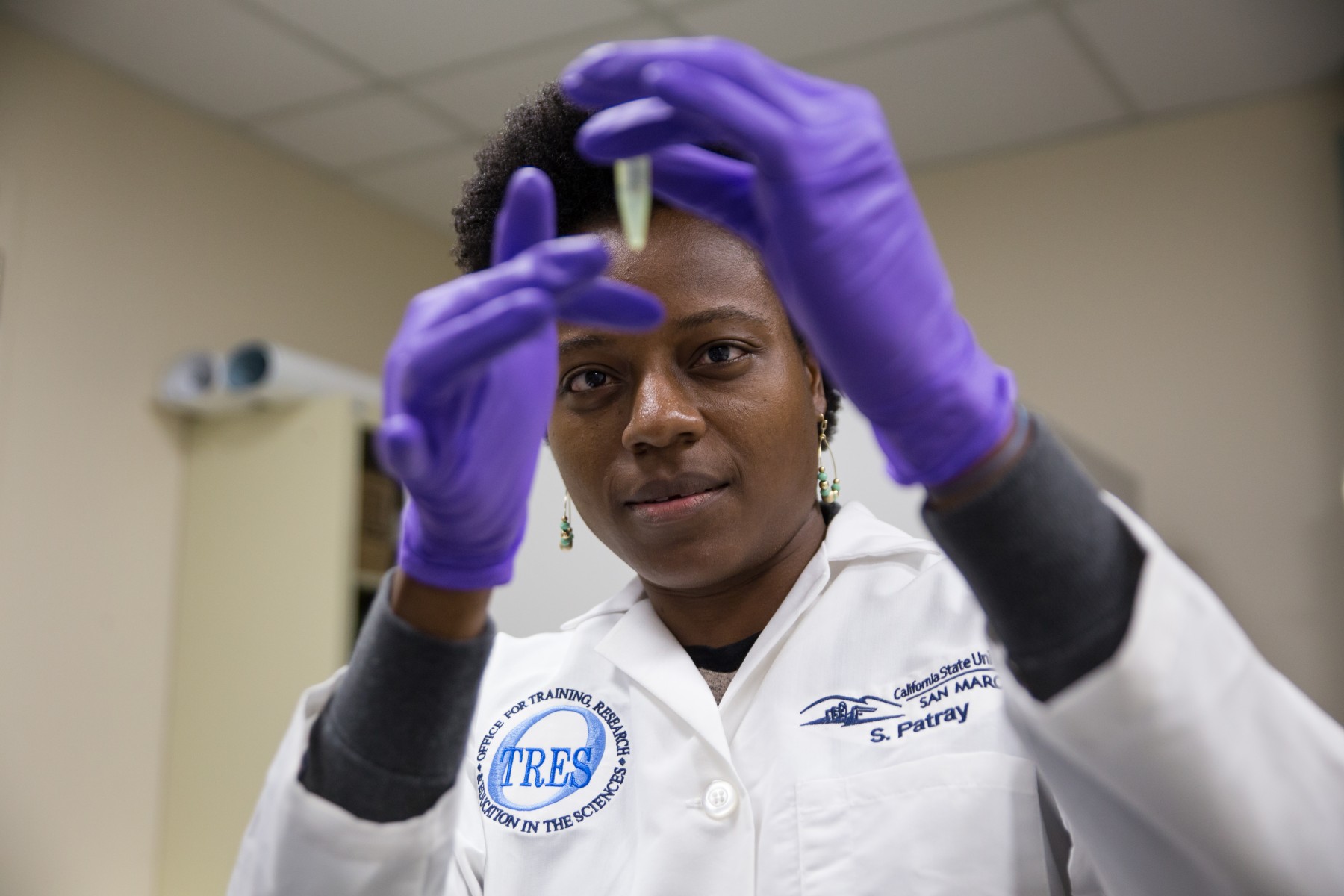 Sharon Patray
CSUSM student Sharon Patray is graduating in May with a bachelor's in biochemistry before setting off for a Ph.D. program at Johns Hopkins University in Baltimore this fall.
NewsCenter