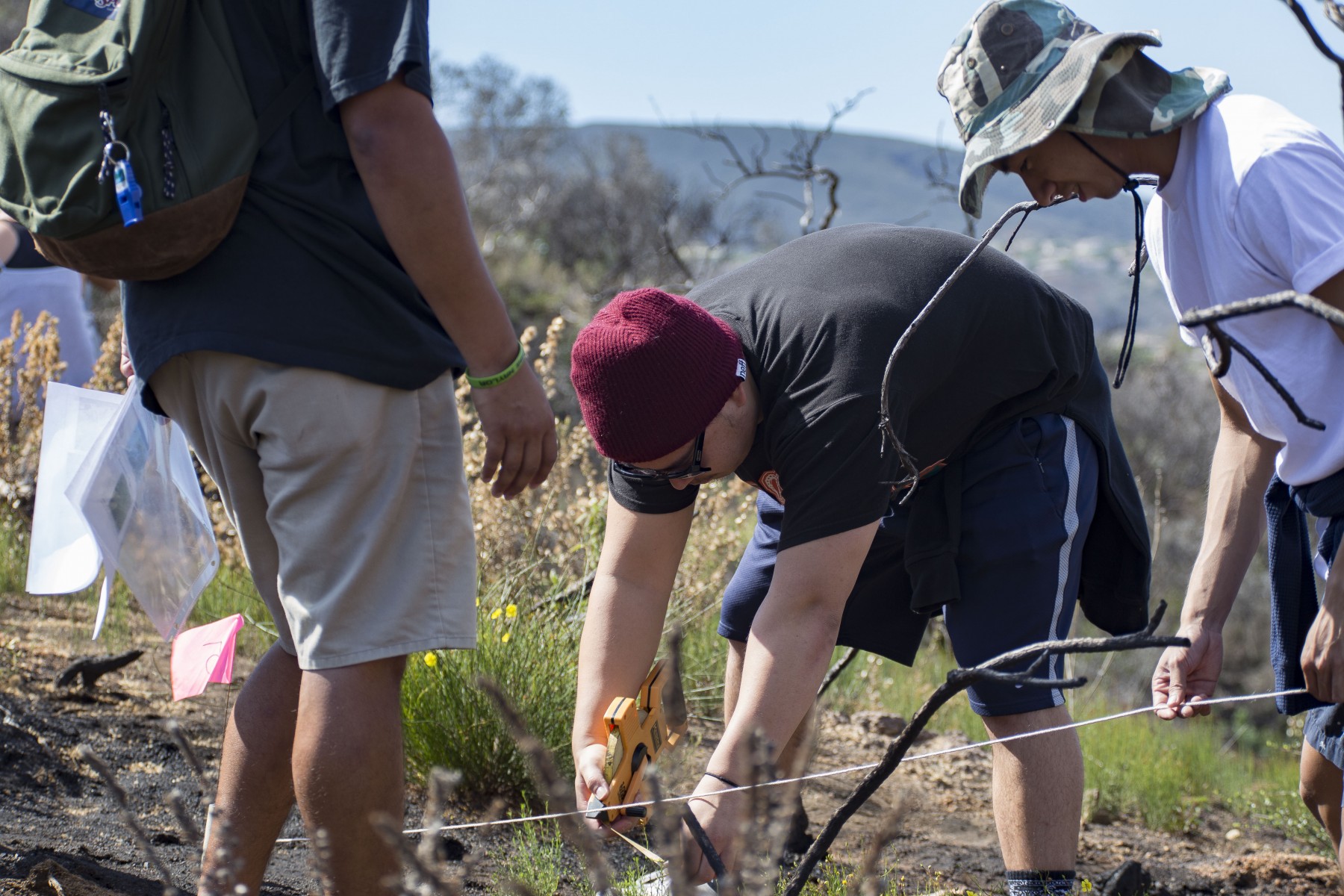 Living Laboratory
CSUSM biology professor George Vourlitis and a group of biology students had their research into the impacts of hydroseeding the hillside near campus published in a recent edition of Ecological Engineering.

It seemed like a good idea at the time, but a move to hydroseed a hillside ravaged by the 2,000-acre Cocos fire at the edge of Cal State San Marcos is changing the natural landscape and may lead to more fires in the future.

That’s the conclusion from CSUSM biology professor George Vourlitis and a group of biology students whose research into the impacts of hydroseeding the hillside has been published in a recent edition of Ecological Engineering.

“The benefit of hydroseeding is you’re reducing the chances of erosion after the fire,” Vourlitis said. “But what we’re seeing is the crowding out of woodland shrubs that had been growing on that hillside and seeing it replaced by grassland. And grassland is more vulnerable to fire than shrubland.”

Vourlitis wrote the paper with several student co-authors, including Jacob Griganavicius, Nikki Gordon, Kaitlin Bloomer, Timothy Grand and Cloe Hentz. The group focused their research in three undeveloped areas of the CSUSM campus that burned during the 2014 Cocos fire, which destroyed 36 homes and left more than $10 million in damages in its wake. Vourlitis was on sabbatical in Brazil at the time, but when he heard about the fire, he saw an opportunity.

“I thought we definitely have to do some research out there,” Vourlitis said. “It was a no-brainer. It burned on university land, and it offered a great chance to use it as a living laboratory.”

Part of the affected hillside had undergone hydroseeding. Another section was left to recover by natural means. A third area that was examined did not burn, but was close to the burned slope and had the same slope direction and characteristics. Research was conducted between September 2015 and April 2016. Working in teams, students from Biology 354 (Principals of Ecology), Biology 390 (Terrestrial Plant Ecology Lab) and Biology 386 (Terrestrial Ecology) catalogued plant species, measured growth and tested soil. The verdict: Hydroseeding inhibits the recovery of native woody shrubs after almost two years of post-fire recovery.

“The hydroseeding treatment used here may result in a vegetation type conversion from a shrub- to a grass-dominated system,” states the research paper. What’s more, “an increase in annual grass dominance has the potential to increase fire frequency such that native shrubs may not be able to regenerate following fire recovery. Such a type conversion could have significant implications for chaparral plant species diversity.”

Gordon said the experience was invaluable.

“We learned how to extract nitrogen from soil samples and determine the percentage of nitrogen and hydrogen in the vegetation samples,” said Gordon, who graduated in December with a bachelor’s degree in biology and is applying to CSUSM’s master’s degree program in the subject. “It was a nice introduction to basic field work and basic lab work and it enabled me to see how the two are interrelated.”

This is not the first time students have worked with Vourlitis on a research project. Nearly four years ago, he spent several weeks in Cuiaba, Mato Grosso, Brazil, with CSUSM undergraduates examining soil fertility and biodiversity in the Brazilian savannah.

“I’ve always attempted to get our students involved in research,” said Vourlitis, a two-time Fulbright Scholarship recipient who heads the CSUSM Terrestrial Ecosystems Research Lab. “It was a wonderful experience in investigating the ecological impacts of fire restoration close to home.”