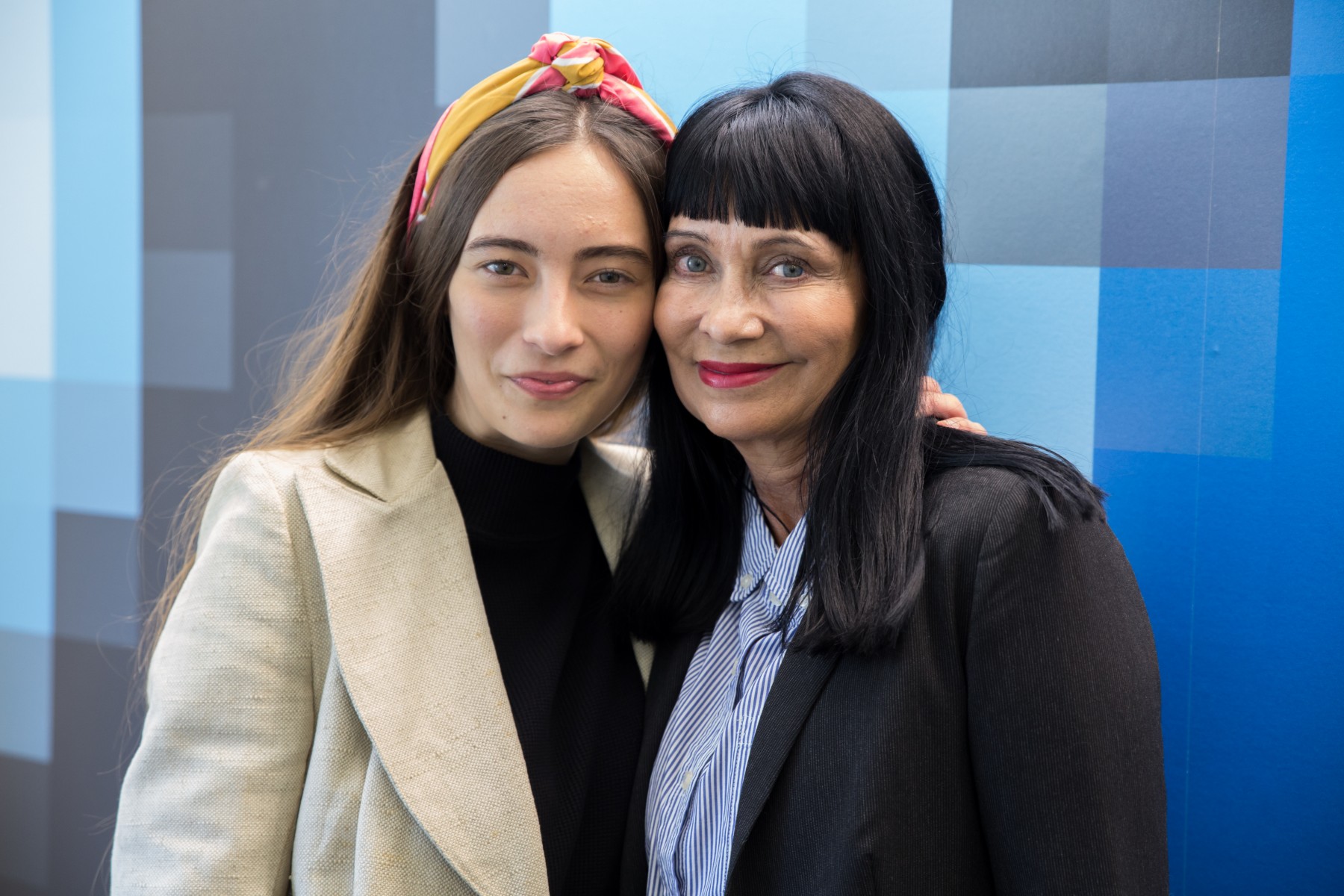 Riley Bender
CSUSM student Riley Bender credits her mother, Coco, for bringing a sense of normalcy to her life during difficult times in her youth. Riley will graduate in May with a bachelor’s in human development. Photo by Christine Vaughan

Riley Bender grew up in Orange County, but it’s difficult for her to pinpoint a specific city.

There were periods of being homeless when her mom would park their station wagon near the Newport Harbor docks. The longest stay she had anywhere was living on a 42-foot boat in Newport Harbor.

Being raised by a single mom working to make ends meet financially meant frequent moves, which led to Riley and her younger sister, Jordan, shuffling through numerous schools.

They were even home schooled for a time, which Riley says was less about schooling and more about hikes and writing poems – she jokes that the biggest skill she picked up during that period was learning how to rhyme.

Riley’s grades were so dismal that she ended up at a continuation school as a high school junior.

But ask Riley about the 180-degree turn her life has taken and she is hesitant to talk about her many successes.

“I still feel this thing where I can’t talk about how well I’m doing above a whisper because it feels like it will just vanish into thin air,” Riley said.

So she doesn’t boast about being a few months away from graduating from Cal State San Marcos with a bachelor’s in human development. She doesn’t brag about being on the Dean’s List every semester during her three years at CSUSM. Or about earning the “Kindest Orientation Team Leader Award” or the “Orientation Team Leader of the Year Award.” Or about being the President of the Human Development Club and the co-founder and president of the Tau Sigma Honor Society for transfer students.

Instead, she expresses gratitude to the people who helped her along the way – from her mom to her siblings to her professors to fellow students – all the while remaining somewhat mystified at how she reached this point. 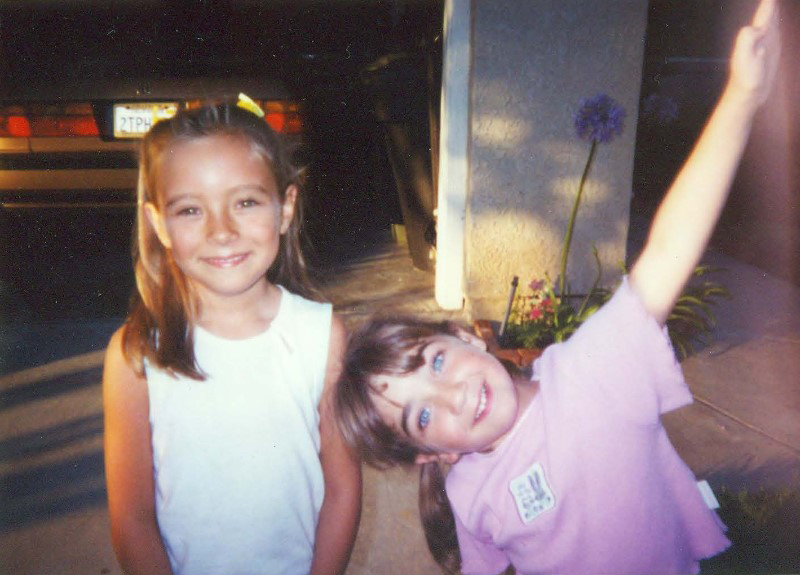 Riley Bender
Riley Bender (left) and younger sister Jordan were raised by their mother in Orange County. Riley will graduate from Cal State San Marcos in May with a bachelor's in human development.

Struggling financially simply meant moving often. And the constant moves made it difficult to get help in school.

Riley’s father had an intermittent presence in her life as he struggled with alcoholism and drug addiction. Most of her memories of him are from visits to rehab centers or hospitals, and he died when she was 16.

Her mother, Coco, had a difficult upbringing – pregnant at 15, married by 16, never having a chance to pursue education. Coco was determined to give her three daughters the opportunities she never had, and she worked numerous jobs in an effort to provide for the family, from cleaning houses to working at Riley’s elementary school.

But finances were always precarious.

“Being poor is expensive,” Riley said. “It’s difficult and debts accumulate. We don’t have a system that’s set up to fully support people who are struggling with poverty.”

Riley still marvels at the irony of her time at a Newport Beach elementary school. The school was a stone’s throw from the ocean in one of the wealthiest cities in the nation, but her family was temporarily living in her mom’s station wagon.

“My mom would pick us up in our home and we’d drive and park our home somewhere,” she said.

“You have to break that cycle,” Coco said, “and breaking that cycle means you have to go to college.”

But figuring out how to get there was another matter, especially when Riley was floundering in school.

Riley ended up at Richland Continuation High School in the city of Orange as a junior. Riley still laughs about the school’s name – “They certainly didn’t have money and there wasn’t a lot of land,” she says – but she praised the school’s faculty for their efforts, even if she still lacked the necessary motivation to succeed in school.

“I just couldn’t pass a class to save my life,” she said. “I can’t imagine how frustrated my teachers and my mom must have been. I tested well and I read so much. I loved to learn, but I didn’t have the skills.”

Riley completed high school through a home schooling program that allowed her to walk in commencement ceremonies with her original high school.

Though Riley struggled throughout her K-12 education, her mom’s persistent refrain – Go to college – resonated.

Riley moved to North San Diego County to live with her older sister, Kelly, who is 19 years her senior, and attend MiraCosta College.

But the change of scenery didn’t mean a change in performance, at least not right away.

“I loved my professors and courses at MiraCosta,” Riley said. “I just could not figure out how to do all the things I needed to do to get a letter grade that reflected my curiosity.” 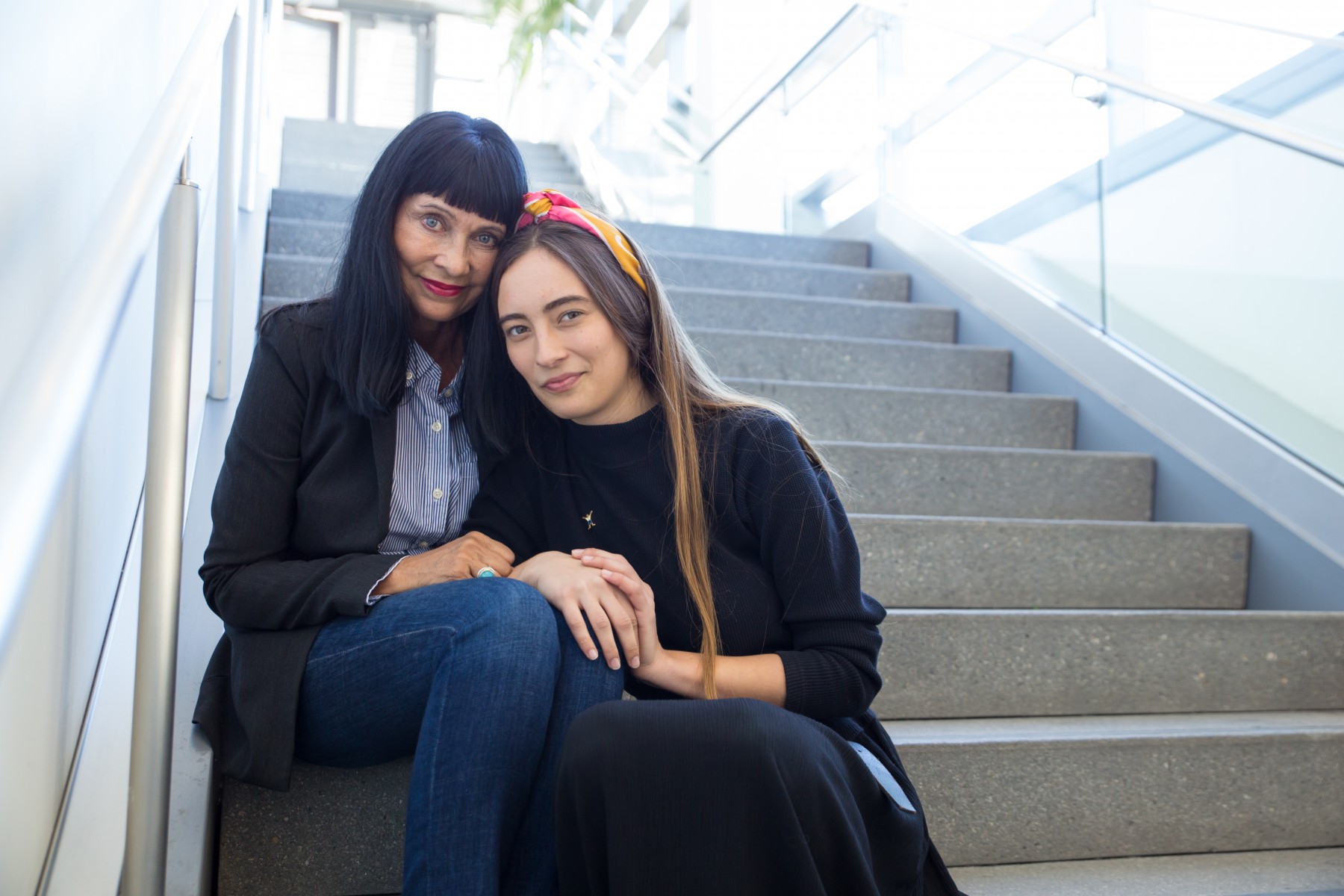 Riley Bender
CSUSM student Riley Bender credits her mother, Coco, for bringing a sense of normalcy to her life during difficult times in her youth. Riley will graduate in May with a bachelor’s in human development. Photo by Christine Vaughan

Riley still isn’t sure exactly why things changed when she transferred to CSUSM. She didn’t even think she could afford to attend a four-year university. Kelly, having navigated the path to CSUSM two decades earlier, insisted that Riley would get financial aid. It was something Riley had never before considered.

Poverty and debt had made Coco wary of sharing personal financial information, and Riley was always told to never provide her Social Security Number for fear it might be used against her in some way.

When Riley started filling out the Free Application for Federal Student Aid form, more commonly known as FAFSA, she stopped as soon as her Social Security Number was requested. She called Coco, who again warned against providing it.

But Riley decided there was little to lose at that point. Completing the application proved a sound decision as she received grant money to cover the entire cost of tuition.

“I was just dumbfounded,” she said. “Not only was I not getting arrested for some debt that we didn’t pay when I was 13, but they were giving me money.”

Riley was cognizant of how isolating it can potentially be for commuter students and transfer students at a four-year university, but she felt none of that when she stepped on to CSUSM’s campus.

“The fact that I was still able to get involved and create a support system felt so incredible to me,” she said. “It’s something I never expected. It was some magical intersection of the culture that Cal State San Marcos fosters – its passion and inclusivity and diversity. It’s just this strong community that I was immediately folded into without ever really trying.”

Not only did Riley get involved in student organizations, she saw dramatic improvement in her academic results. Her grades skyrocketed and she found a perennial spot on the Dean’s List.

“Riley impressed me the first time I met her at an HD Club meeting,” said Tracy Hall, a lecturer in CSUSM’s Human Development department and faculty co-adviser of the HD Club. “What impresses me the most is her positive outlook on life and her enthusiasm for wanting to do well and be someone who is making a positive difference in people’s lives.

“She has had to overcome many obstacles in her life, and to come this far is a testament to who she is.” 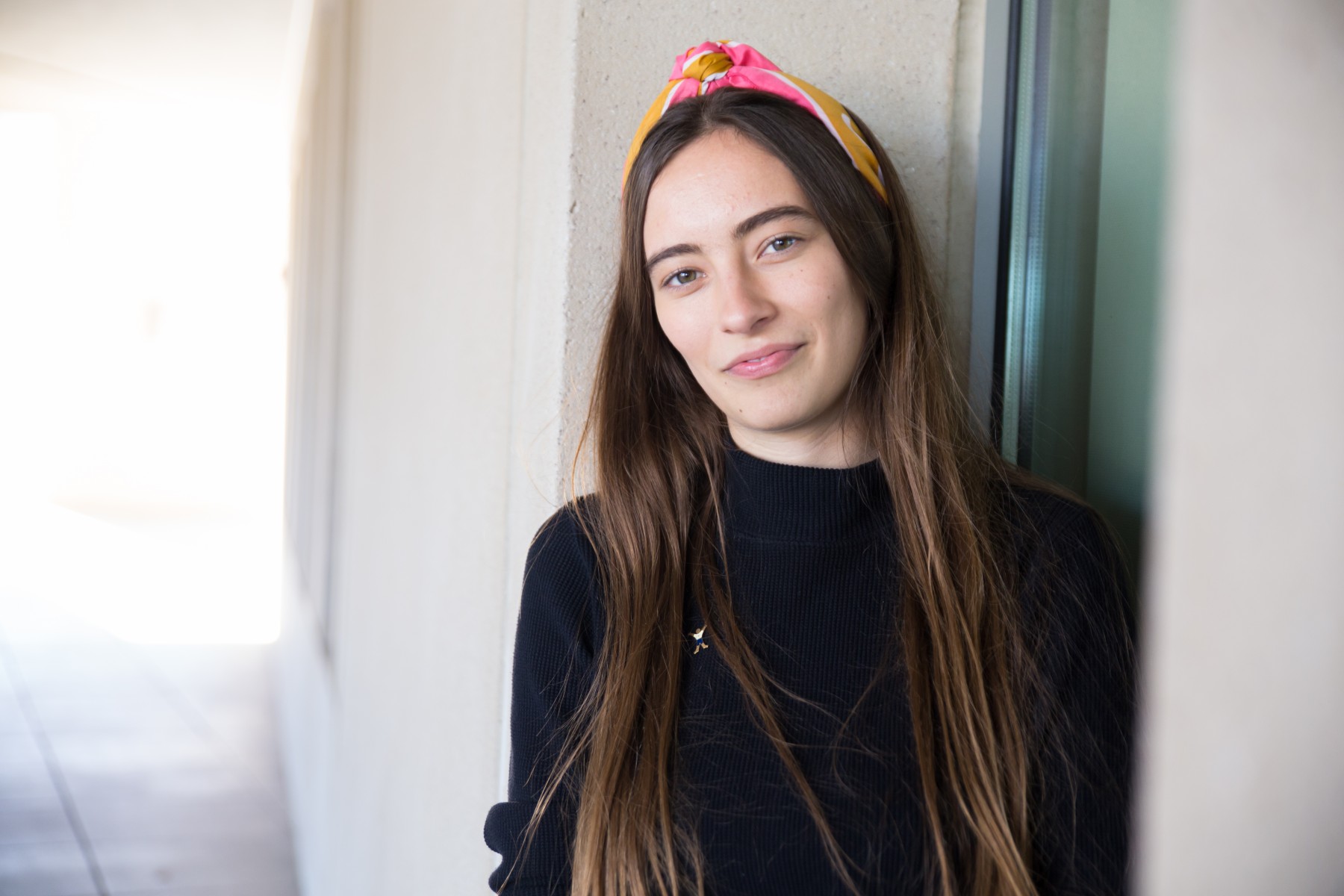 Riley Bender
Overcoming years of struggles in school, Riley Bender will graduate from Cal State San Marcos in May with a bachelor’s in human development. Photo by Christine Vaughan

Riley will attend graduate school next fall to study marriage and family therapy.

Going through the application process made her cringe seeing some of the grades that are no longer reflective of the student she has become. But she is learning to appreciate the adversity and struggles she went through to reach this point.

She recently received an email alerting her to the development of a clinical counseling master’s program at CSUSM. But the program won’t launch before fall 2019 and Riley doesn’t want to lose the momentum she has gained at CSUSM.

“When I got that email my heart just stopped because I would love to stay here,” said Riley, 24, who has applied to graduate programs at Cal State Fullerton, Chapman and Long Beach State. “The hardest part for me in going to grad school is not the applications or anxiety anticipating the rigor of the program, it’s leaving my community.

“The sense of community and belonging can have such an impact on a person. I think that’s why I’ve tried so hard to get involved in things that can provide that for other students because that sense of having a support system really changed the game for me.

“I see so many student leaders on campus and so many people who are inspiring, so when I hear that I’m able to contribute in some way to that and provide that for others, it feels unbelievable. I never would have expected to feel this reality at this point in my college career.” 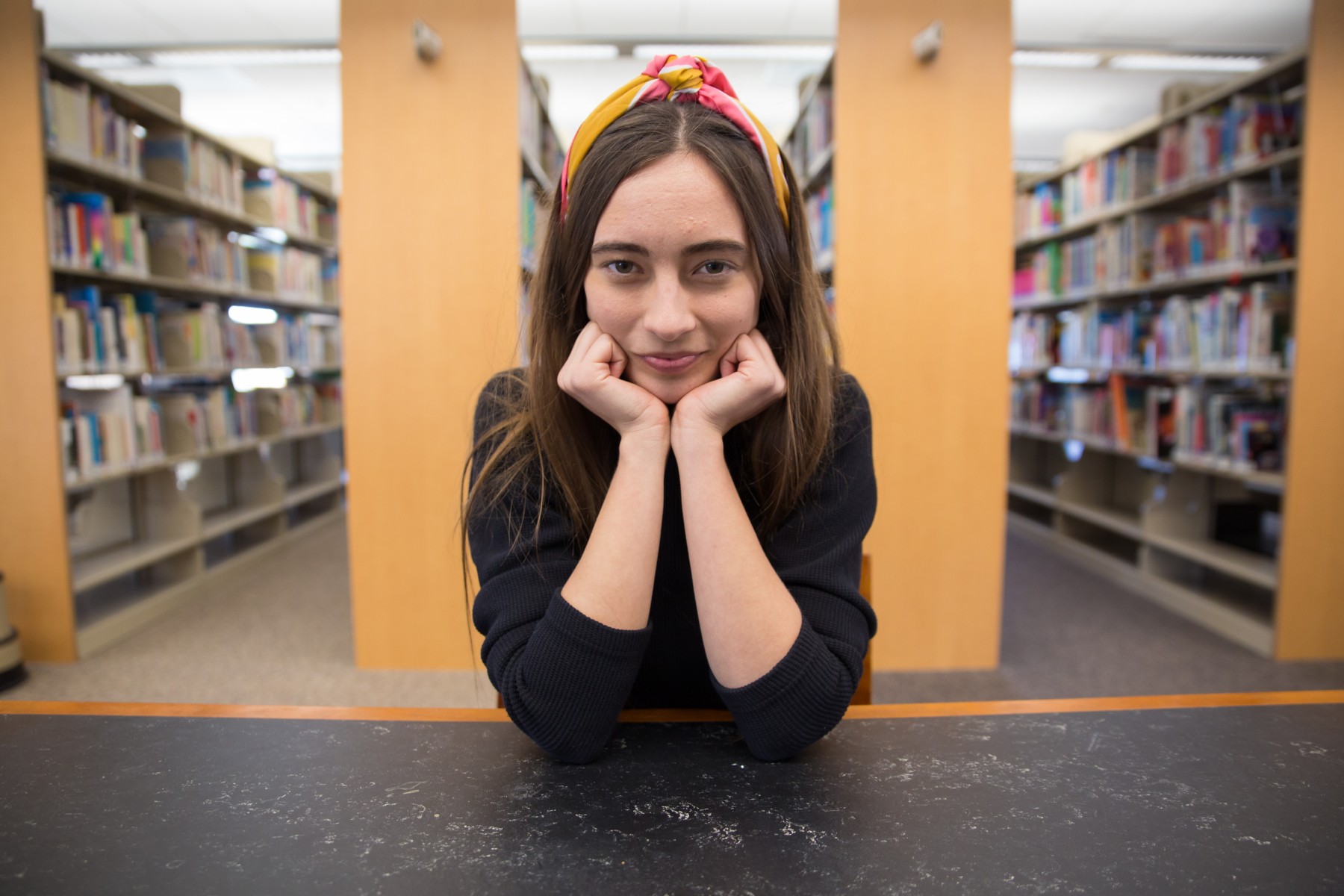 Riley Bender
Overcoming years of struggles in school, Riley Bender will graduate from Cal State San Marcos in May with a bachelor’s in human development. Photo by Christine Vaughan