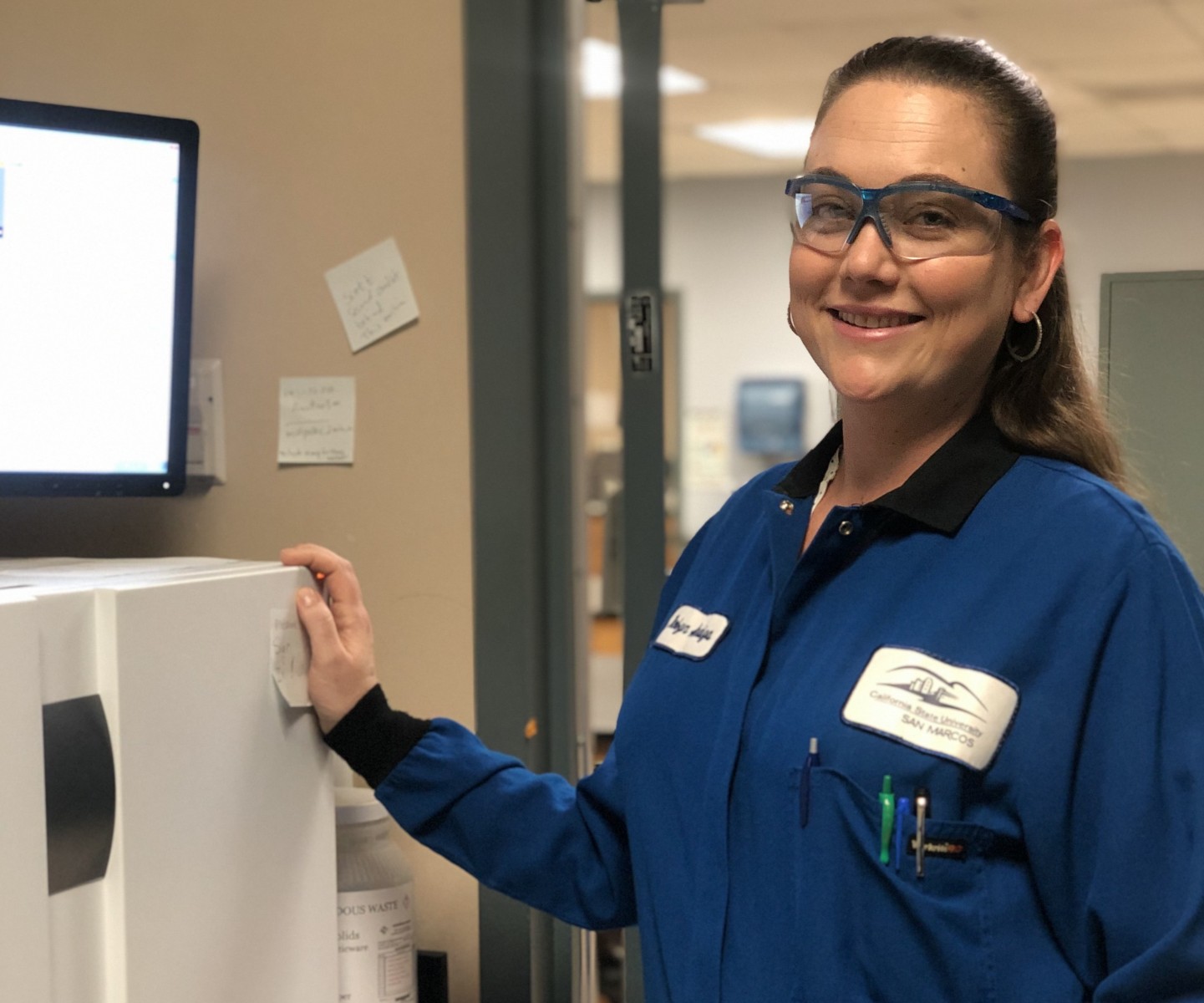 In addition to earning her bachelor’s in biochemistry from CSUSM, Robyn Araiza recently became the first graduate of the university’s master’s program in chemistry and currently teaches two courses in the department.

Robyn Araiza was an undergraduate student in the Literature and Writing Studies Department at Cal State San Marcos in the early 2000s.

She wasn’t 100 percent sure on her career path, but she wanted to explore what the program touts as “the global literary experience.”

She took GES 100 (“The Physical Science Around Us”) for a general education requirement, but had no intention of doing anything in science beyond passing the course. That was partly because although she enjoyed science in high school, she had what she described as an “awful” chemistry teacher.

“I swore I was never going to take another chemistry class again,” Araiza said.

As fate would have it, a few CSUSM professors had something else in mind for her. Araiza’s GES 100 professor convinced her to take his Chemistry 150 course the following semester because he “called me out for not working to my potential.”

That’s when she also met Jackie Trischman, who would serve this time in Araiza’s life as her lab instructor but eventually would progress to her mentor, colleague and friend.

Organic chemistry was next, a course she completely fell in love with. It wasn’t long before she was changing her major to chemistry and essentially altering her entire life.

In addition to earning her bachelor’s in biochemistry, Araiza recently became the first graduate of CSUSM’s master’s program in chemistry and currently teaches two courses in the department.

“As a scientist, I very much acknowledged that education is a journey and there's no end to it,” Araiza said.

Araiza’s journey through both CSUSM degree programs required equal amounts time and patience. While many of her classmates were relying on a combination of student loans and help from home, she handled the financial burden by working and earning scholarship money from a variety of sources.

In her last semester as an undergrad, Araiza worked as a TA for as many professors as she could.

Upon earning her undergraduate degree, she had no interest in going into the classroom.

“I swore I'd never teach,” she said. “But by the end of it, I was asked to come back and teach Chem 416 labs (‘Instrumental Methods of Analysis’). Even when I started teaching, at first I swore it was a transitionary job.”

However, the department sweetened its offer to keep her lecturing by offering to pay for her master’s degree tuition as CSUSM was on the verge of beginning its advanced degree program in chemistry.

While it took the next 10 years to get the master’s degree program up and running, Araiza continued to make more of an impact each year she spent in the department.

By the time that first cohort began the master’s program, she was already a year in and had access to labs as a faculty member.

“So I ended up teaching there the whole time,” said Araiza, who has a 4-year-old son. “I kind of really got drawn into it and fell in love with teaching. And then eventually the master's program opened and I figured that was the whole reason I got the job there. So I did the master's program, but it really hasn't impacted my teaching all that much because it was already what I was doing before.”

Araiza finished her master’s last summer and immediately began to rewrite the lab component for the Chem 105 course (“General, Organic, and Biochemistry for Life”) that she taught in the fall. Although students were forced to take their lab kits home because of the pandemic, she developed a program where everyone logged into Zoom sessions to share the lab experiences together.

It worked so well that a version is being developed for usage if Super STEM Saturday is forced to go virtual this year.

“She is mentoring research students, active in assembling outreach teams and doing amazing work with Chem 105,” said Trischman, the CSTEM interim dean. “This course is taken by pre-nursing students and kinesiology students. Robyn was instrumental in bringing the lab online, and her work in collaboration with Dr. Kambiz Hamadani has been shared across the system. She also developed good insights into how students approach virtual learning.”

She’s also currently teaching “Chemistry of Chocolate” (Chemistry 316) as an upper division GE course. It has 120 students this semester from every imaginable major. The class was set up as an expansion of Trischman’s natural products lecture.

“It's the idea of kind of looking at the ups and downs of natural products and how a plant can be used for positive things and negative things,” said Araiza, who said her goal as a teacher is to demystify chemistry. “And natural things aren't necessarily good. And synthetic things aren't necessarily bad. So we kind of tried to make a point with it.”

The course also has an international component.

“Robyn is working with Robert Carolin and the Office of Global Education to bring her ‘Chemistry of Chocolate’ students together with gastronomy students in Ecuador,” Trischman said. “They will learn about the science their studies have in common from Robyn and about the sustainability of chocolate production that they study in their course in Ecuador.

“Robyn is interested in reaching students across the university. She never stops thinking about the relevance of her teaching and how to improve student success.”

In a nod to her own experience, Araiza is drawn to teaching non-science majors. Even as a graduate student, she wasn’t necessarily headed toward the Ph.D. route. That’s why the CSUSM program – now in its second cohort – was perfect for her.

In addition to catering to people who are already working in the medical field, the master’s program boasts its individualized approach as faculty members typically have only one or two students to work with.

“It gives kind of a little bit more directed attention versus these really big labs at some other universities,” Araiza said. “It's also designed for people who work. Since classes are in the evenings, you can do your research on the weekends. So several of the people who ended up in the program have full-time jobs. It's a nice thing to consider that people are already in the industry.”

The private industry may come calling for Araiza in the future with a wealth of experience in a lab coupled with her leadership skills.

But it’s hard to envision her leaving the place that she has called home for the past two decades.

The one-time lit major analyzed her future, rewrote her story, and altered her life path.

Wasn’t she supposed to never want to be around chemistry again?

“I always laugh at that,” Araiza said. “I’m never going to take another chemistry class again, and here I am teaching them five days a week. No, science was not at all in my plans when I first started. The joke was on me on that one.”