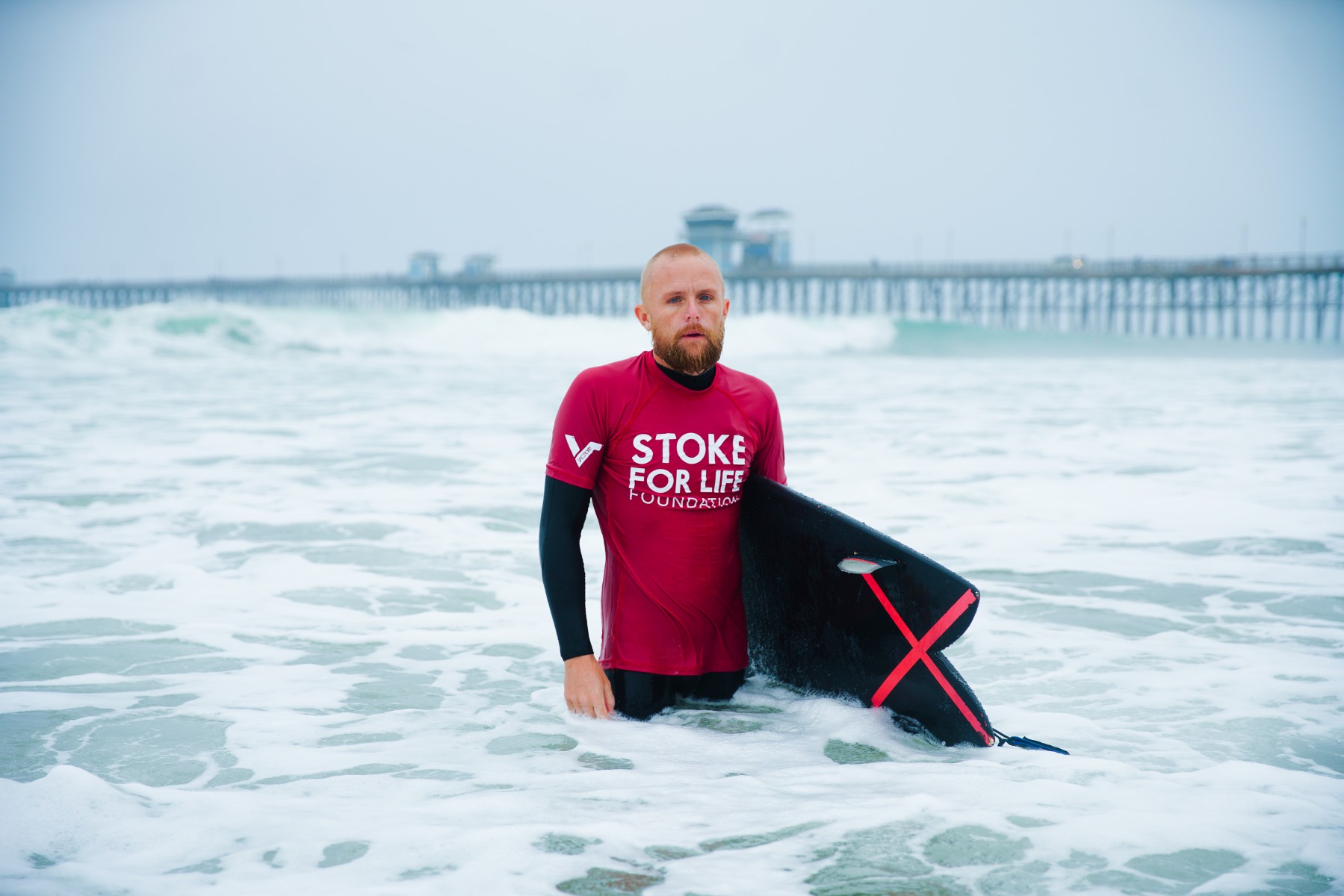 Ryan Eick
The senior kinesiology major is a coach, volunteer coordinator and water safety captain for Stoke for Life Foundation, a nonprofit focusing on adaptive watersports.

As expected for a senior kinesiology major, Ryan Eick pores through his textbooks during the week to build the knowledge he needs to work with adaptive athletes. But on the weekends, he trades his textbooks for ocean waves, and what he reads there can be lifesaving.

As a coach, volunteer coordinator and water safety captain for Stoke for Life Foundation — a nonprofit focusing on adaptive watersports — Ryan often starts event days by himself on the beach, reading the ocean waves for any potential hazards. These early-morning assessments are critical for the safety of the adaptive athletes. This is also the kind of work Ryan thrives on in his second career.

For 15 years since graduating from high school, Ryan has searched for his purpose. He adopted, and adapted, many roles along the way, but despite outward success, he remained unfulfilled. After an early attempt at college sputtered, he continued taking classes throughout the years as he pursued work in sales, restaurants, public relations and the music industry.

“If you can think of a job that doesn’t require a college degree, I’ve probably done it,” he said, laughing. “I found everything that I don’t want to do.”

A former youth swimming and water polo coach, Ryan decided to volunteer at a physical therapy clinic to learn about working with injured athletes. While a clinical environment wasn’t right for him, working with athletes facing challenges was. A degree in kinesiology would be his first career step, which led Ryan to CSUSM at Temecula.

Ryan discovered Stoke for Life Foundation through a friend who suggested that he volunteer at one of its adaptive surf camps. There, he found his purpose. Based in Carlsbad, the foundation aims to bring adaptive watersports to athletes of all ages and abilities through surf and paddle clinics and competitions.

“I’m choosing my career more on values this time rather than money,” said Ryan, 33. “Do I feel good doing this? The money is secondary to the cause. That’s why I do this, because it’s a good cause. Kids in wheelchairs need to be told what they can do, not what they can’t.”

At Stoke for Life, Ryan primarily works with the youth surfers, often as a pusher. Adaptive surfers who can’t swim need designated pushers to power them onto a wave, which they then ride to shore. The foundation provides the adaptive equipment, coaching and safety staff to ensure all of their athletes have the opportunity to pursue their sport as far as they want.

In fact, after Ryan graduates this month, he and a group of Stoke for Life surfers — including foundation founder and adaptive athlete Charles Webb — will take their skills to the international stage. In June and July, the group will travel to Hawaii, then England, Wales and Spain, where they will compete in international adaptive surfing contests.

After years of searching, Ryan has found that his cause is surf therapy and his office is the water, fitting for a former water polo athlete. And the timing? Just right, he says.

“For me, graduating is the beginning of something, not the end,” Ryan said. “I am an older student and I have a lot of life experience. My past is what got me where I am today. I have found what I want to do and, finally, I can start.”