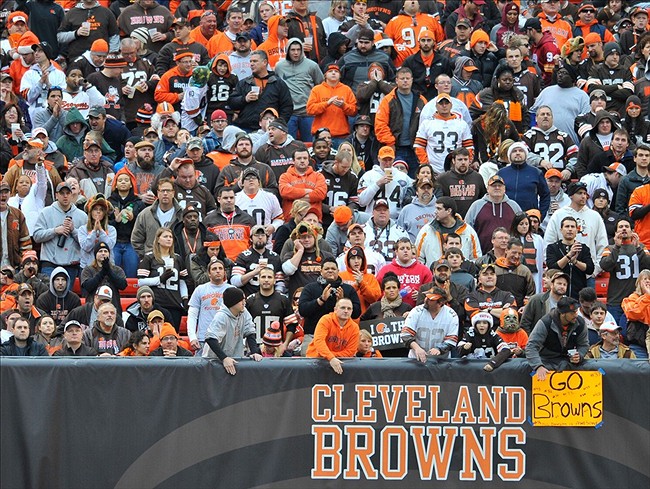 He was among the most hated men in Cleveland. And when NFL owner Art Modell died, jilted fans still steaming about Modell’s decision to move their beloved Cleveland Browns to Baltimore celebrated.

Now Cal State San Marcos Professor of Marketing Vassilis Dalakas, together with colleague Joanna Melancon from Western Kentucky University and former CSUSM student Tarah Sreboth, has co-authored a study on what the joy Browns’ fans felt when Modell died in 2012 says about sports fans in general.

Modell bought the Browns in 1961 for $4 million and was the team’s owner when it won the NFL Championship in 1964 (this was three years before Super Bowl I). It was the last time Cleveland earned a championship in any of the major professional sports. The franchise, renamed the Ravens after moving to Baltimore in 1996, would go on to win two Super Bowls in its new home while the Cleveland expansion team, the Browns, continued in its struggle to reach such heights.

The study, `A Qualitative Inquiry on Schadenfreude by Sport Fans’, was based on a sampling of reader comments posted on an ESPN website story about Modell’s death of natural causes at the age of 87. Some of the comments were downright brutal in expressing fans’ hatred toward the NFL owner.

“These are normal people, I assume, who are making these comments,” Dalakas said. “Some of these people may be lawyers or bankers or teachers, and yet they are allowing themselves to diminish their own humanity and celebrate a person’s death.”

A total of 233 posted comments were analyzed for the study.

“The comments were unfiltered actual responses by fans, thereby providing rich data that captured the people’s true emotions and reactions in real time shortly after the event occurred,” states the study, which is forthcoming in the Journal of Sport Behavior.

Comments were categorized to fit into various modes of Schadenfreude, a German word used to describe the feelings of pleasure and joy that one person experiences at the misfortune of others.

More than 10 percent of the comments explicitly celebrated the death.

“Enjoy your ride to HELL...!” wrote one reader. “There is a special place for you! Burn baby Burn!”

Thirty percent of all comments justified the hatred Browns’ fans felt toward Modell that motivated their Schadenfreude.

“This bloodbath in here right now is his own fault,” stated another reader. “He tarnished his own legacy. He soiled his own reputation and he deserves these unbecoming epitaphs that come as a direct result of the decision he made alone.”

Wrote one reader: “ESPN, please close the comment section, this is beyond ridiculous. No man deserves this.”

Can comments such as these portend any danger?

“That’s an excellent question,” Dalakas said. “And one that probably could use some additional research. Given the Alabama fan who poisoned Auburn’s landmark trees, you have to wonder if some die-hard fans would take matter into their own hands to inflict pain to their rival.”

Dalakas notes the study was limited in its scope.

“This was an exploratory study to capture Schadenfreude in a controversial context, and the comments provided interesting insight on the psychology of sports fans, especially because they represented fans’ true feelings in a real-world setting,” the authors wrote. “However, the richness of the comments came at the expense of internal validity; there was no ability to measure respondents’ identification level with the Cleveland Browns or to include other measures.”